My mtDNA line goes back to Elizabeth “Bettie” Walker. Her maiden name and her parents are unknown to me. She married Stephen Walker around 1830 probably in North Carolina. Stephen’s parents are also unknown to me. I am not sure if Y-DNA testing has been done on this Walker line. If you are a male descendant of this Walker line, please consider Y-DNA testing at Family Tree DNA.

Stephen and Elizabeth Walker had the following children:

I am fortunate enough to have three mtDNA matches at 0 genetic distance who posted very detailed family trees to their FTDNA account. I mirrored each of the family trees and have been researching all three families in hopes of connecting them together and finding a link back to my Walker family that is a brick wall.

My mtDNA matches do have something in common in that their ancestors were all living in western North Carolina and Eastern Tennessee. At one time, this entire area was Rowan County, prior to that Anson County. The area was constantly condensed down into separate counties from 1753, when Rowan was created from Anson, up until recent times when Avery County was created in 1911 from Mitchell, Caldwell, and Watauga Counties.

I am still working to verify the female line for Match 1. Thus far, I am not able to connect this line to Match 2 or Match 3. According to the matches tree, the Bradshaw ancestor was born in Burke County but moved to Lincoln and Rutherford Counties and later generations moved to Swain County.

mtDNA Match 2 has the surname Pankey in their tree – the same Pankey family that settled in Richmond County, North Carolina, so, I have already added Match 2 to my family tree but have not been able to connect the lines to my ancestor Elizabeth Walker yet. Match 2 descends from Royal Pankey who died in 1818 in Marion County, Tennessee. Royal’s first cousin, John Pankey, remained in Richmond County, North Carolina. He married Rebecca Newberry, daughter of Jonathan Newberry.

Thomas Pankey, son of Royal, married Teresa Stone, daughter of William Stone and Mary Randles, daughter of James Randles and Rhoda Clack. These looked to be prominent families who were in the area very early on. In later generations, both the Hackworth and the Pankey families intermarried with the Layne family.

The real star of the show is Charlotte Loving Berry, born about 1798 and died after 1880. She married George Berry who descends from the Burke County Enoch Berry line. Charlotte’s father is James Loving who looks to be a late comer to Burke County. Most family trees show him on the 1800 Census for Chester, South Carolina but on the 1810 Census for Burke County, North Carolina. Most trees also have him linked to the infamous Loving family in Amherst, Virginia who played their part in the Revolutionary War. There is also some debate on whether this Loving family reaches back to the Lomax family.

I have that same question, but it is a more recent connection to a Lomax family that I am trying to determine.

Stephen Walker is found living in Davidson County, North Carolina in 1840. Three houses away is Tabitha (Gooden or Goodwin) Lomax, wife of Revolutionary pensioner, William Lomax, who died in Davidson County in 1835.

Ten years later, in 1850, Stephen Walker is living next door to John Lomax, the son of Tabitha Lomax, in Montgomery County, North Carolina. 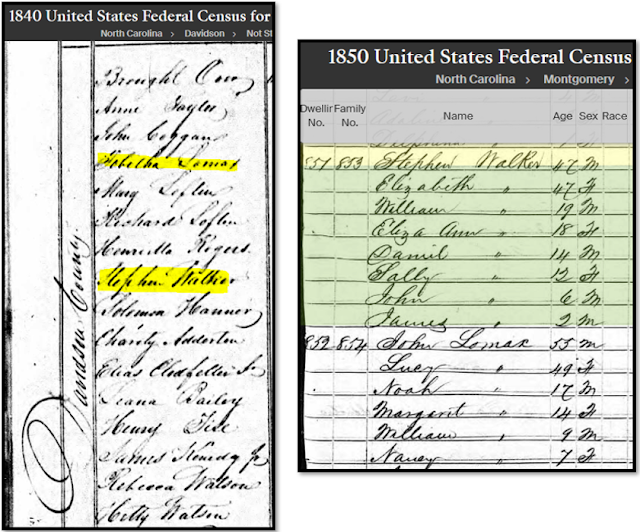 Dovey Walker, married Ebenezer Hearne. Her maiden name is found in the Revolutionary War pension file for her husband, Ebenezer. The "proof" document is dated 8 Nov 1924, (Dovey died in 1847) is a request for information pertaining to the Rev War service of Ebenezer Hearne. Dovey Hearne's maiden names is provided as Walker; however, this cannot serve as proof that this is her maiden name due to the late date of the document and the fact that it is not mentioned in the original claim.

Ebenezer does state in his pension file that he gave his discharge papers to a certain John Walker but does not mention any relationship to him. So, it is possible that there is some relation to a Walker family.

Mary Polly Walker, married Thomas Morris. This line is forever doomed to be confused with my own Morris line. This Morris family does not Y-DNA match to my own. Thomas Haton Morris is shown on Find a Grave as buried in my Morris family cemetery in Uwharrie. To my knowledge, he is not buried there. Most researchers connect Thomas Morris to Polly Walker with a marriage bond dated 22 Feb 1800 in Wake County, North Carolina. However, this puts Mary's first four children born outside the bounds of marriage. I have never found any real proof that Mary’s maiden name was Walker. Of interest, it seems that some of this family migrated to Rutherford County, North Carolina.

Daniel Walker, born about 1786 and died after 1850 in Montgomery County. He married Jennifer Thompson. I just recently found Daniel. It would seem his daughter, Elizabeth, married John Morris, a descendant of the Thomas Morris / Mary Walker line. Elizabeth’s death certificate lists her parents as Daniel Walker and Jennie Thompson. 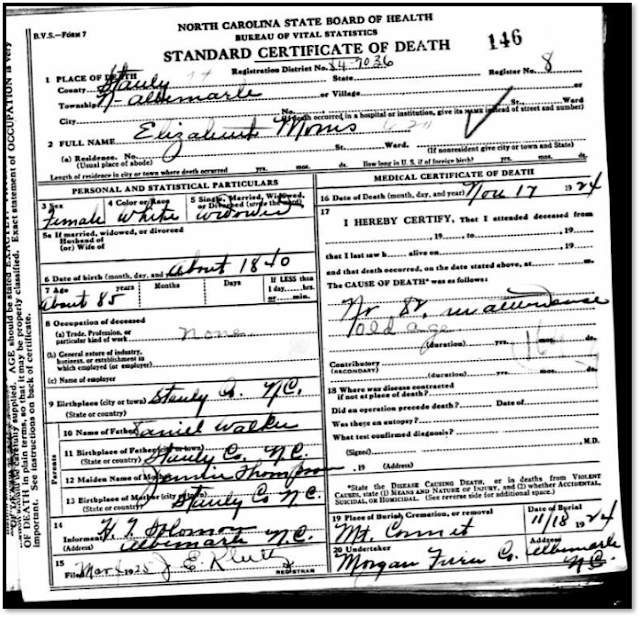 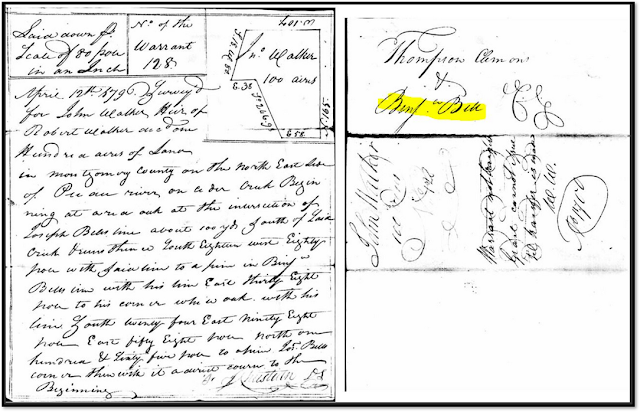 There are several more grants and surveys for Robert and John Walker for both sides of the Yadkin and Pee Dee rivers on Long, Royals (Riles) and Gar creeks. This area is close to both Rowan and Davidson counties. This is definitely a family that needs to be researched more.

Robert is probably the father of John Walker and maybe the father of CatherineHicks, whom John is found living with on the 1850 Census. Catherine's daughter, Rachel, ended up married to Henry Bell, the son of Benjamin Bell who served as a chain carrier for some of the Walker surveys.

Margaret, Zachariah, and Isaac Walker. A land grant and survey for John and Margaret Walker (could she have been John’s wife or daughter?) shows 54 acres on the waters of Long Creek joining Weaks line. Isaac and Zachariah Walker were chain carriers. 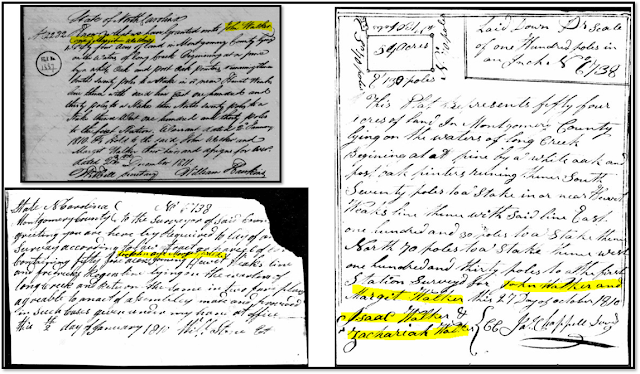 David Walker received his tract of land on Long Creek in 1808. The survey shows that tract joining Robert Walker’s line. Isaac Walker was a chain carrier. 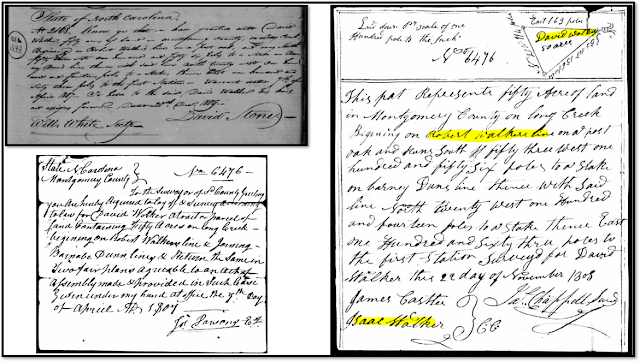 We already know that Robert Walker on the west side of the Yadkin and Pee Dee River is probably the same Robert Walker on the east side of the river. Expanding the research into other counties I found in Randolph County, bordering Montgomery County, a Robert Walker who is listed as the nephew of William Bell. I do not think this Robert Walker is the same one that resided in Montgomery, but I do think there is some relation here. A son or nephew perhaps, on the other hand, I suppose it could be. In a deed dated 1806 in Randolph County is found William Bell deeding, for the natural love and affection he has to his nephew Robert Walker a tract of land on Deep River and Caraway Creek.

This certainly brings up questions if William Bell could be related to the Bell family in Montgomery whom intermarried with the Walker and Hicks family. 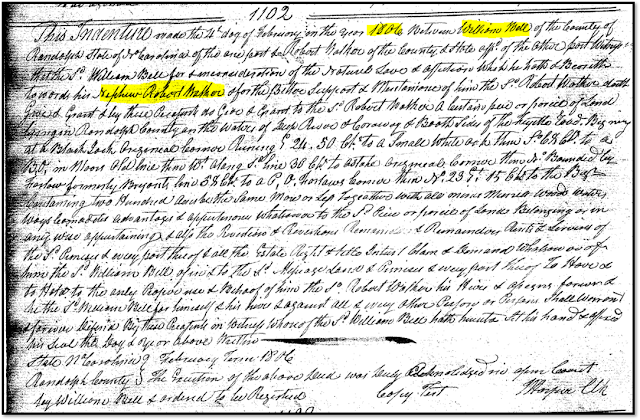 William Bell died in Randolph County in 1822. His estate file is 103 pages. Robert Walker was one of the executors of the last will and testament of William Bell. On page 25 of the estate file is found the petition of the Gray family asking for the division of slaves to be made. 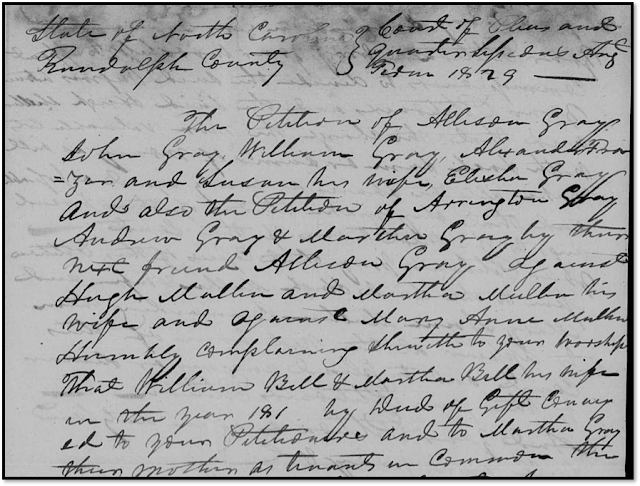 This one document brought these families together. Robert Walker, in 1779 had two land grants for tracts of land on Long Creek in Montgomery County. The chain carrier for both surveys was William Gray. 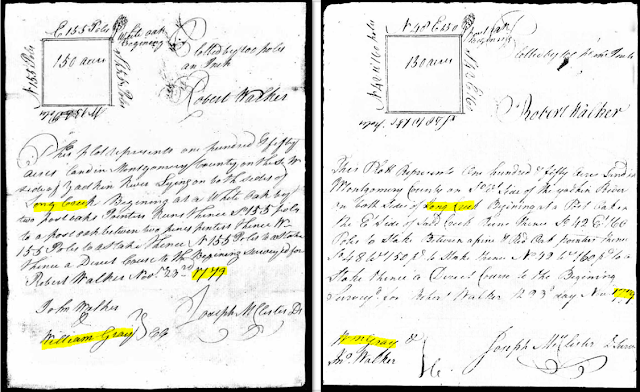 Much more research is required on the Walker family to find out how they may relate to the Loving and Berry families in Burke County, North Carolina and more especially to Stephen Walker and his wife Elizabeth, whose mtDNA I carry.

Posted by Uwharrie Roots at 3:43 PM