On Mill Stone Mountain – the Story of Selby Hearne

Situated between Barnes Creek and Ophir Road, Mill Stone Mountain is one of the summits in Montgomery County, North Carolina with an approximate elevation of 659 feet above sea level. This area, once called Hattom, but now called Ophir, is located in the heart of the Uwharrie National Forest. The area is wooded with occasional peaks of cleared land and old dirt roads that lead to hunting lands but once, perhaps, to homes where families lived. If you were to take away the pavement, the power lines, and metal fencing, you can almost imagine it as it might have looked in 1810.

Ophir was most likely named for the biblical Ophir due to the number of gold mines in the area. Data from the mines that operated in this area is scarce. Russell and Coggin mines are the best known only because they have preserved historic documentation, but there were reported to have been more than 35 mines operating in Montgomery County at one time. Some of my ancestors are reported on Census data as being miners. Selby Hearne, my fourth great uncle, lived in Hattom. He was a farmer. I have been gathering information on him for a few years because it seemed he always showed up wherever the Morgan’s were. I descend through Selby’s half-brother, William Hearne, my fourth great grandfather, and through William’s son, Stephen Hearne who married Priscilla Morgan, daughter of Joseph and Susannah Smart Morgan. I believe that Selby is in some way related to Hardy Morgan’s wife, Nancy Hearne Morgan, but I am not able to document a paper trail between them.

Selby Hearne, born about 1785, son of Stephen Hearne and Prudence Coggin, makes his first appearance on the 1810 Census for Hattom, Montgomery County, North Carolina. His is listed as between the ages of 16 and 25. Living with him are his wife, of the same age, and one son and one daughter, both under ten years of age. 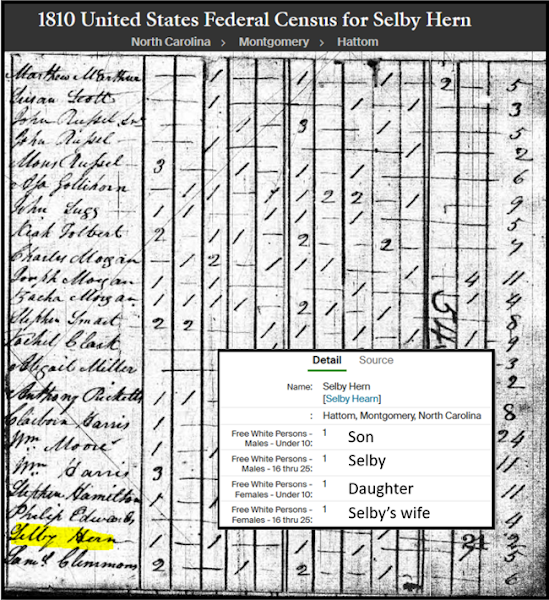 Selby’s immediate neighbors are Phillip Edwards, probably the brother of John Edwards, Revolutionary War pensioner who, in his pension file says he is the son of Phillip Edwards of Montgomery County, North Carolina. John, after traveling quite a bit between North Carolina, Tennessee, and Alabama, ended up in Jefferson County, Tennessee about 1832 where he was still living when he applied for his pension in 1839. 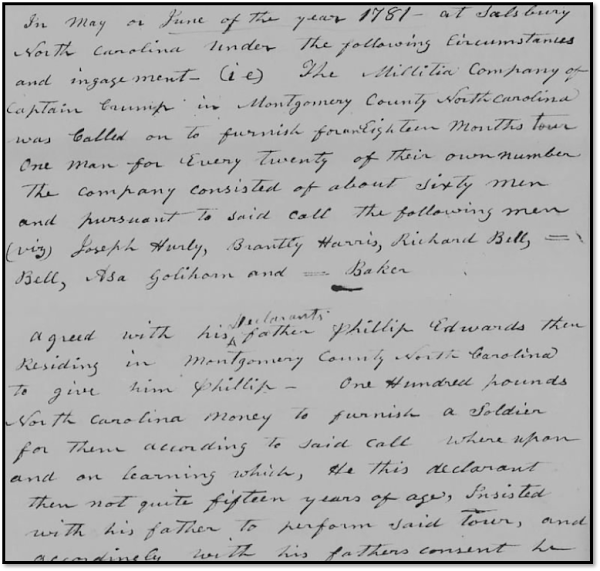 Samuel Clemmons, another neighbor, might be the same man known as Samuel Thompson Clemmons who migrated to Wilson County, Tennessee along with Thomas Williams and Samuel Williams, other men from Montgomery County whom he served with in the Revolutionary War. He listed his age in 1832 when he filed his claim for a pension as 81 years old, making him born about 1751. His age is off on the 1810 Census, listed as between 26-44 years old, making him born at the earliest 1766.

Note: Thompson Clemmons indicates in his Revolutionary War pension file that he left Montgomery County around 1807. If that is the case, then these are two different men.

Other neighbors are the Morgan’s, late comers to Montgomery County. They migrated from Chatham County, North Carolina to Montgomery County about 1805. Charles, Joseph, my fourth great grandfather, and father to Pricilla who married Stephen Hearne, Selby’s uncle, and Zachariah, live in Selby’s neighborhood. Zachariah Morgan is the brother of Charles while Joseph is most likely the son of Charles Morgan.

With the 1820 Census being destroyed, other means must be used to show Selby’s whereabouts for this time. In a deed dated 26 Aug 1819, Selby sold 80 acres of land on the east side of the Uwharrie River known by the name of Poplar Shoal joining the lands of Booth and Cotton to Jane E. Hearne, daughter of Thomas Hearne, Merchant in the town of Fayetteville; the land being one half of the land which Thomas Cotton conveyed to his son James Cotton and at the death of James Cotton fell to his daughter Mary Cotton, afterwards Mary Brumfield, and after marriage was conveyed by Mary Brumfield and Jesse Brumfield, her husband, and George Massey her guardian, to Selby Hearne. 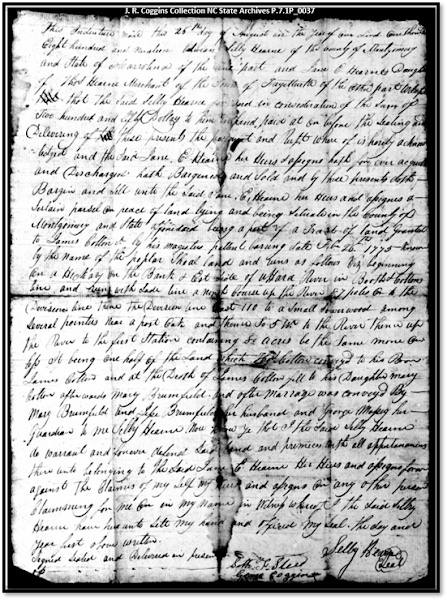 In 1830, Selby and family are living east of the Pee Dee and Yadkin River. Selby is noted as between the ages of 40 thru 49. He has several children living at home and four enslaved persons 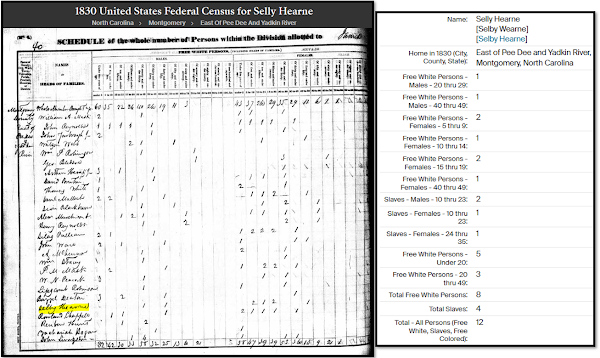 1840 shows Selby still living in the same area. His age, seemingly correct, listed as between 50 thru 59. His wife also listed as still living, being around the same age as Selby. On female, age between 15 thru 19 is listed at home. There are eight enslaved persons living in Selby’s home. 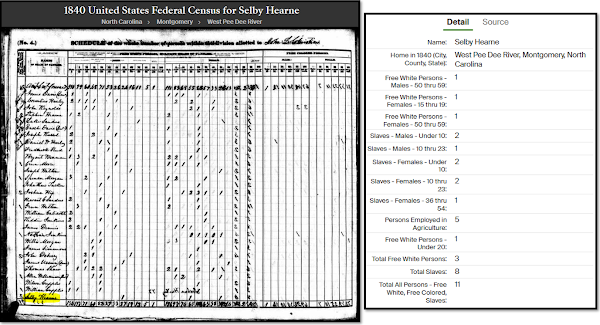 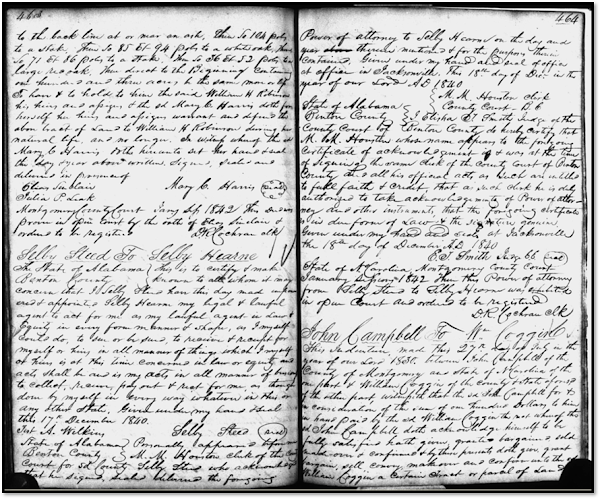 In 1832, Selby Steed is witness to a familiar deed. Thomas Hearne, William D. Clark, and Jane E. Hearne Clark of Elbert, Georgia sell to Agrippa A. Steed of Coweta County, Georgia, brother of Selby Steed, the same land earlier sold by Selby Hearne to Jane E. Hearne in 1819 but provides a more detailed description. It being a tract of land granted to James Cotton by his Majesty's patent bearing dated Feb. 26, 1775, known by the name Poplar Shoal. 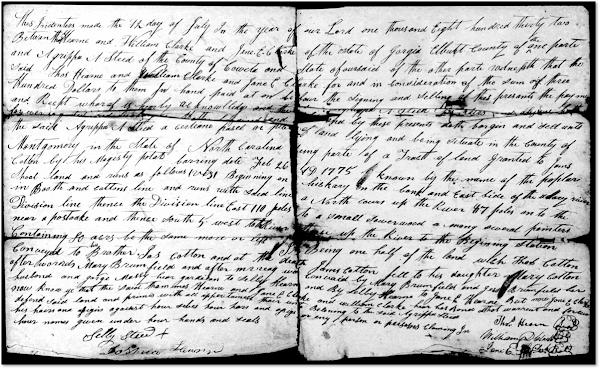 It becomes clearer where Selby Hearne lives from a land grant dated April 1841. Selby was granted twenty acres of land on the waters of Barnes Creek on the Mill Stone Mountain adjoining George Coggin and William Hurley. Isham Coggin and George Coggin were chain carriers for that survey. 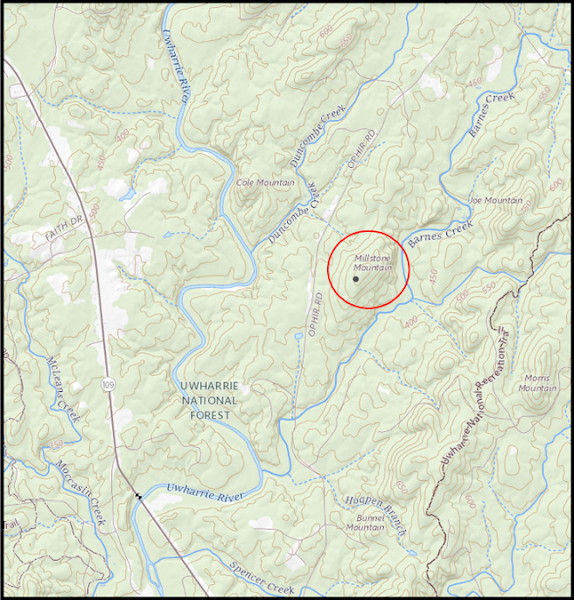 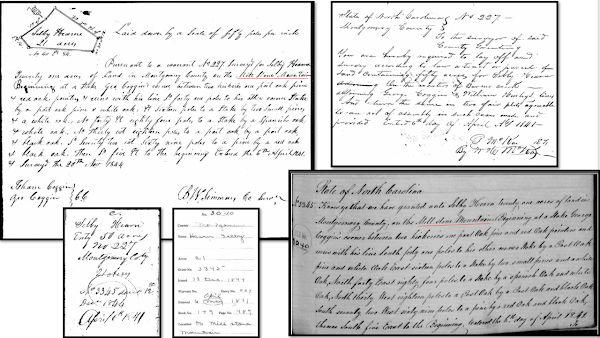 In 1849, a deed is registered between Selby Hearne and Enoch Brookshire and daughter Rebecca Brookshire of Randolph County, North Carolina, a girl slave, about nine years of age, by the name of Rosine. 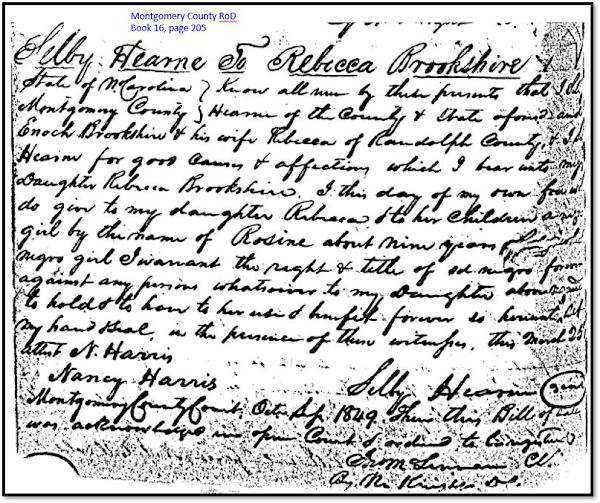 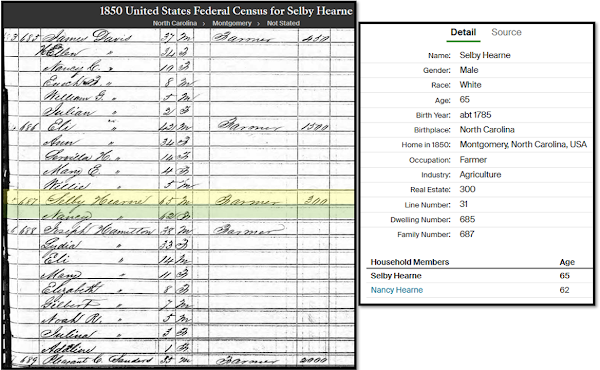 In 1851, Selby enters for 50 acres of land but is only granted 28 acres on the waters of Barnes Creek joining Eli Davis and Robert Steele. James Davis and Enoch Davis were chain carriers for the survey. 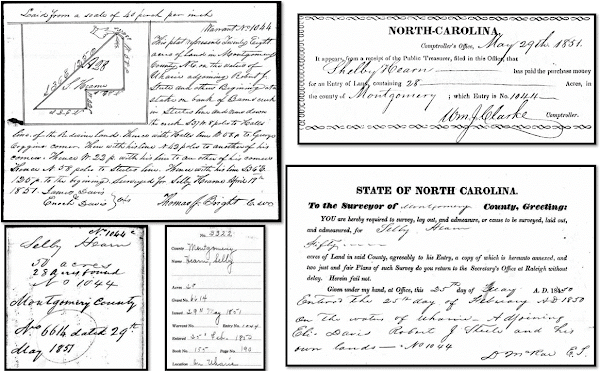 1860 finds Selby and wife Nancy living in Beans, Montgomery County, North Carolina. Selby has not moved, the name of the area he lives has changed. Nelson Steed, first cousin of Selby Steed is living next door.

Children of Selby and Nancy Hearne are: 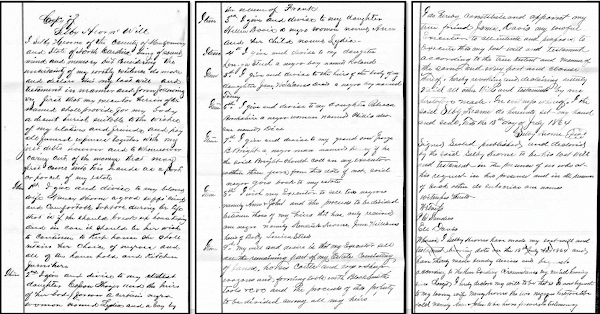 Selby’s estate was settled in 1878 when his two tracts of land on the waters of Barnes Creek known as the Jackson place and the [Mill Stone] Mountain were sold. 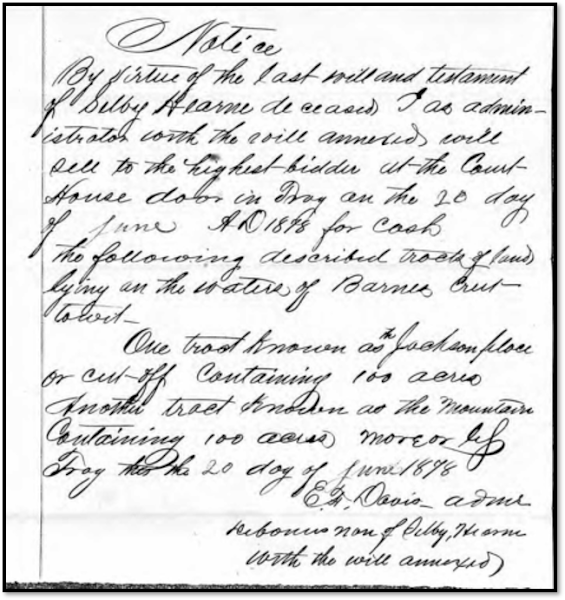 Seeing the area where Selby Hearne lived is not an easy thing. Selby lived on the Barnes Creek side of Mill Stone Mountain. The Uwharrie National Recreation Trail will take you through that area, but it is very wooded with no long-range views of the surrounding area. 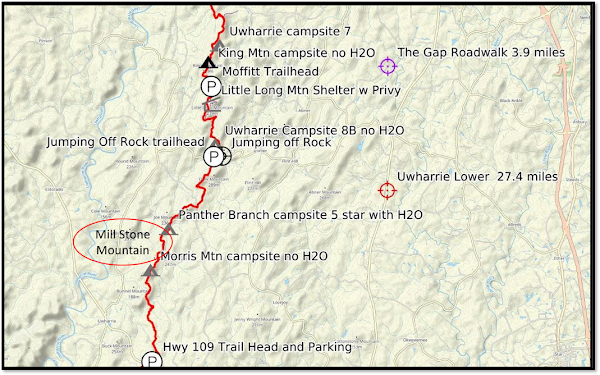 Posted by Uwharrie Roots at 10:21 PM No comments:

The Unknown Williams - On the waters of Clark's Creek 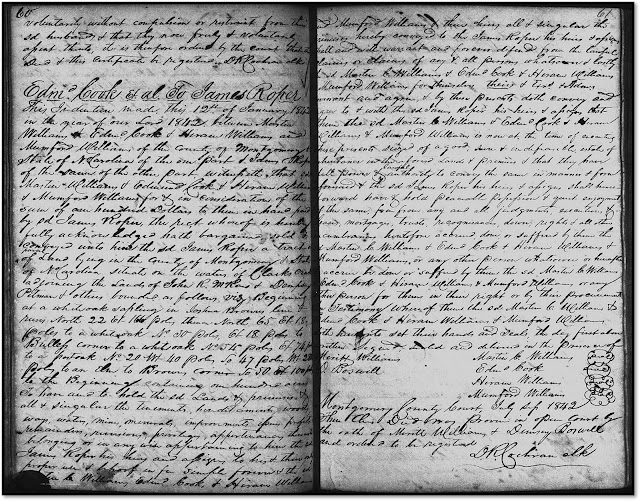 There are five Williams men, Mastin C. Williams, Hiram Williams, Mumford D. Williams, Merritt Williams, and David Williams whom I am not able to connect together. There is also a man by the name of Edmund Cook who may have married a sister to these Williams men.

Below, I have noted what I have learned about these men. If anyone has any additional information, please leave a comment, or contact me through the blog.

Mumford Williams died between the 1870 and 1880 Census years. I am not able to find an estate file for him. Caroline is living with daughter, Martha, son-in-law, Josiah Lisk, and granddaughter Lorena Caroline Lisk. Lorena married Samuel Berry Morgan, son of Samuel F. and Susan Morris Morgan, my second great aunt and daughter of John Jacky and Amelia Morris. Josiah Lisk married second to Hattie Lisk, daughter of George and Mollie Lisk in 1899. Lorena Carolina Lisk Morgan is usually confused as the daughter of Hattie but is not. Hattie did have a daughter, Lela, born 1890.

As a note, Samuel Berry Morgan fathered a daughter, Esther Hall, with Sarah Hall, daughter of John Hall and Margaret Talbert. The bastard bond dated Sep 1888, two months before Esther was born. Esther went on to marry Neal Ledbetter and had children.

Green Smith is the son of James C. Williams and Martha, some family trees have her maiden-name listed as Parham, but no evidence to support the claim. In 1847, Green Smith sold his interest in slaves that belonged to the estate of his father James, and who Martha, his mother, took to Carroll County, Tennessee when she moved there with her son, Cuddy Smith and her grandson, Nelson, son of Green. 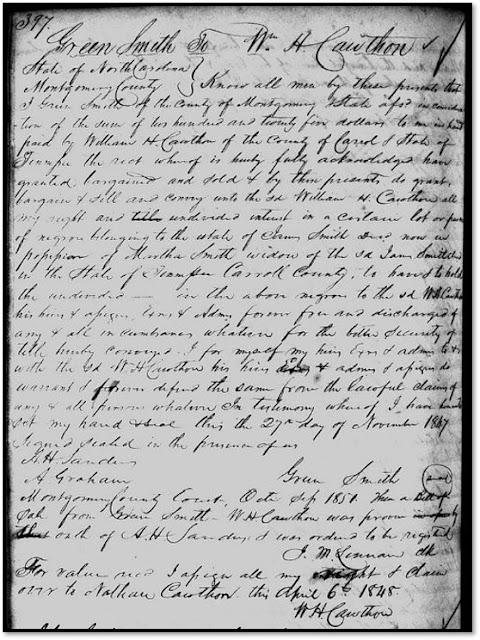 Other family members moved to Carroll County, Tennessee as well, Nancy Johnson, Green’s daughter, the widow of Thomas Johnson, as she was listed in the publication from Montgomery County, North Carolina Court of Pleas and Quarter Sessions Term 1860, nine years after Greens death. John Smith, son of Green Smith, also migrated away from North Carolina, probably to Tennessee with the rest of the family but I have not found him yet in the Census.

In 1850, Green and Olive are enumerated on 20 September in Montgomery County, North Carolina living beside Olive’s father, Thomas Moore (born 1769) and mother, Elizabeth (born 1773). Living in the same household is her brother, John Moore (1807) and wife Jerusha, and children Regina, Armistead, Atlas, John, Laura, and Alfred. Joseph and Nancy Bulla are also listed, unidentified as of now. 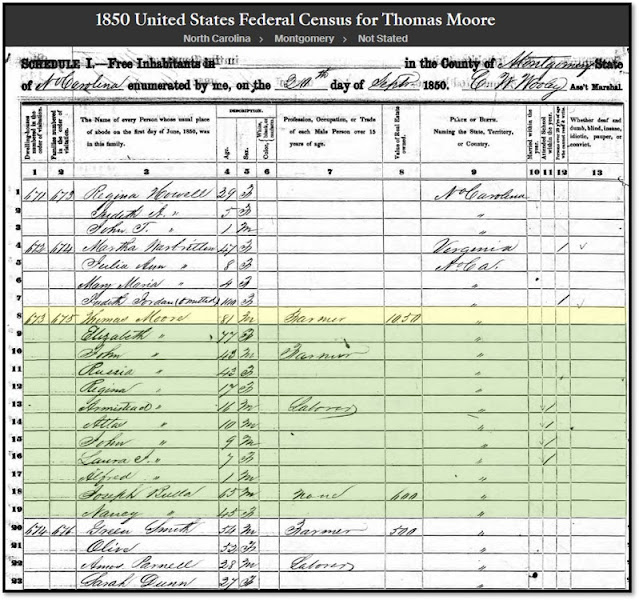 Green Smith’s estate file is ninety-two pages long. The file begins with his wife, Olive, renouncing her right to Administer the estate of her husband, Green, and hands that duty over to John H. Montgomery (he married Mumford and Caroline in 1843). 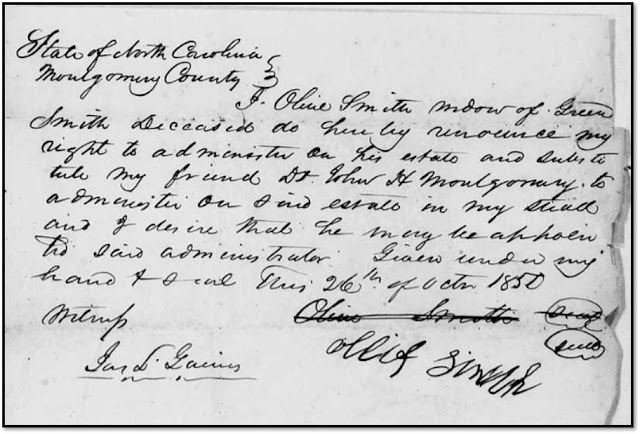 In Jan 1851, Olive’s dower in the estate of her husband, Green, was laid off by commissioners of the court and included 265 acres of land on Rocky Creek adjoining Thomas Moore and Mumford Williams, two hundred acres of piney woods where Jonathan Smith lives adjoining Benjamin Deberry, and one other tract where Peter Hall lives on the waters of Clark's Creek near Lawrenceville, one hundred acres. 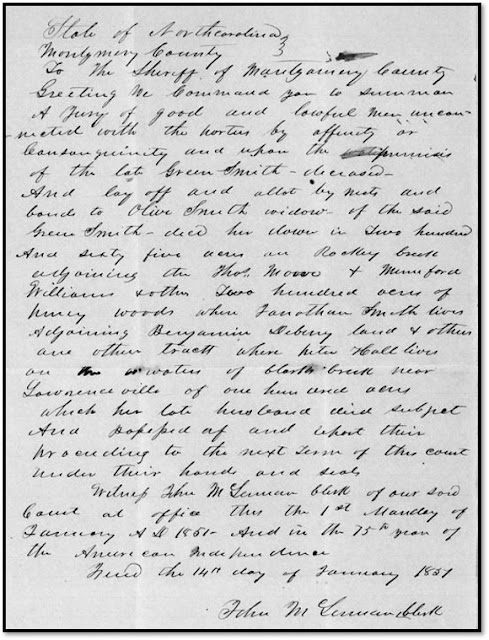 By 1859, Olive and her brothers-in-law, Richmond, and Curtis, are back in court looking for settlement of the estate, advising that Green Smith’s estate was more than sufficient to pay all debts and funeral expenses. The estate was finally settled by C. W. Wooley, nearly 20 years later. 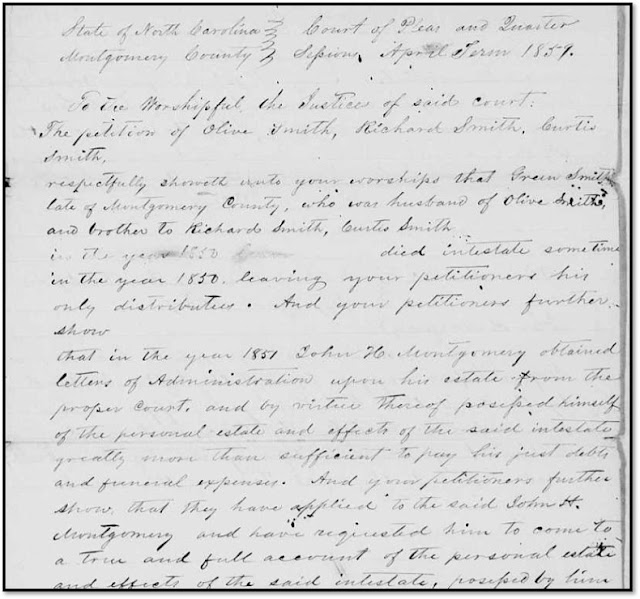 Mastin Crawford Williams, born about 1814, probably in Montgomery County, North Carolina. I am not able to document parents for Mastin, however, there are some clues found in an 1839 deed where Thomas Williams and Keziah Andrews sold one hundred and forty acres of land on the waters of Clark’s Creek to Mastin C. Williams. A fellow researcher pointed out that this could be siblings selling land. Keziah could be a female who married an Andrews. Several searches have not found anything useful on Thomas or Keziah. There were several Thomas Williams in Montgomery County but none that would be around the same age as Mastin. 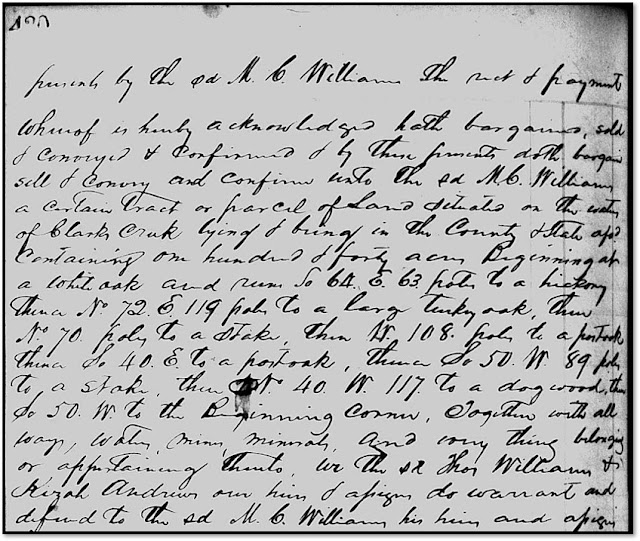 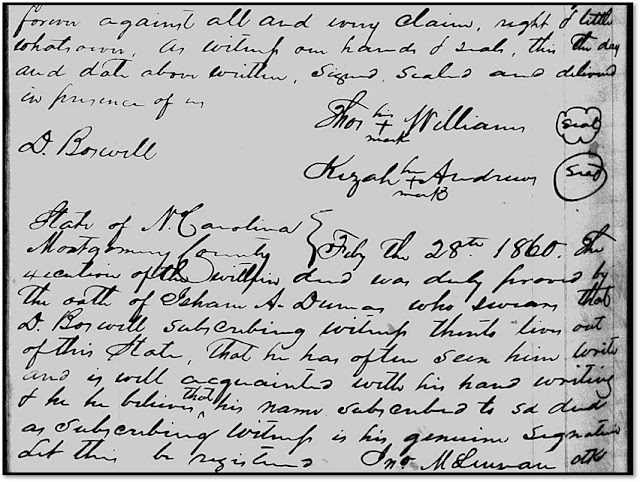 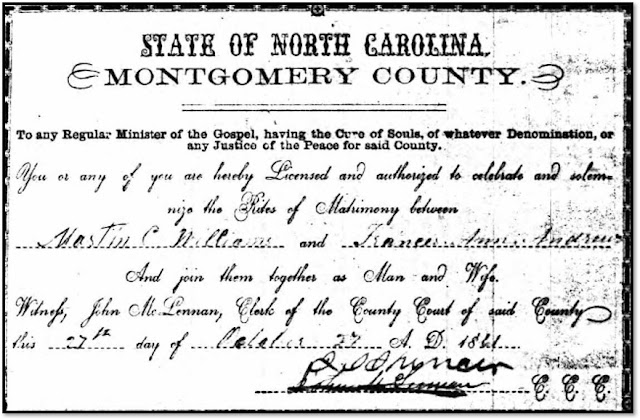 Hiram Williams, born about 1805, married unknown. Parents unknown. Hiram is found on the 1840 Census for Montgomery County, age between 30 – 39. He has a wife, age 20 – 29 and a son under 5 years old. Hiram is also a slave owner. He disappears after 1840 and it is possible that Hiram moved to Tennessee with some of the other members of this family. I found a possible Hiram Williams who later ended up in Lamar, Texas who matches the age range. More research required. 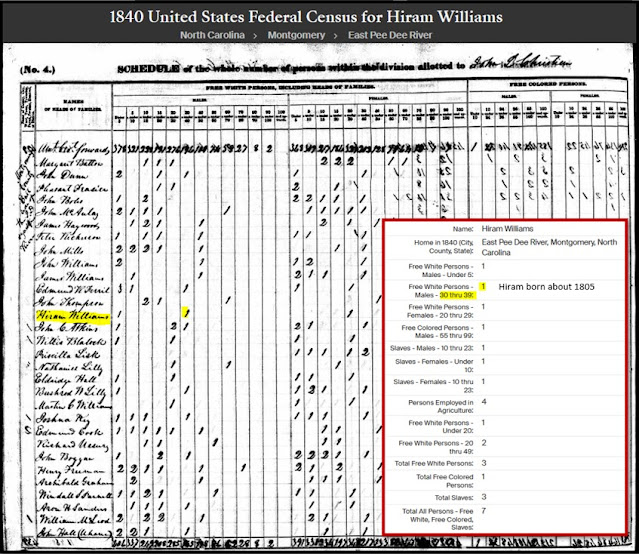 In 1843, Seth Andrews notified Merritt Williams that he had levied on three hundred acres of land on the waters of Clark’s Creek adjoining E. Davis by virtue of an execution in favor of John McRae.

Edmund Cook, born about 1795, probably in Montgomery County, North Carolina. Married unknown, but perhaps a Williams since he was an heir to the land in the deed with Mastin, Hiram, and Mumford. Edmund had seventeen acres of land surveyed in 1836 on the waters of Clark’s Creek adjoining David Williams deceased. James Roper and Mastin Williams were the chain carriers. 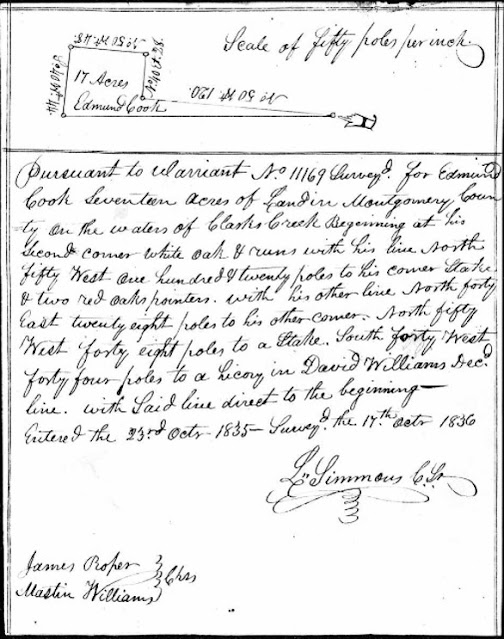