According to Census information, John Morris was born about 1788 in Virginia. He worked as a miner in the gold mines that popped up all over Montgomery County in the early to mid-1800s. His grave marker says he died 7 Dec 1874. He is married to Amelia, born about 1790 and died Mar 1874. Her maiden name is unknown. Amelia lists her birthplace as Virginia on the 1850 Census, but North Carolina in the 1860 Census. I am not able to find John and Amelia on the 1870 Census. John and Amelia had several children and I will talk about them in later Blogs.

Both John and Amelia are buried at the Morris Cemetery off River Road in Uwharrie Township. According to Find-A-Grave, the inscription on Amelia's gravestone was legible in mid-1990, when a cemetery Census was done, but has since eroded away. The inscription on John’s stone is barely legible.

Two male Morris cousins and my paternal Uncle have Y-DNA tested. Our Morris line Y-DNA matches to a John Morris (1750 VA – 1840 NC) and Phebe Tudor from Granville County, North Carolina. We also Y-DNA match to a descendant of Groves Morris, grandson of John Morris and Phebe Tudor. Our last match is to a man who claims descent from Samuel Morris (1710 VA – 1790 VA) and his wife Mary Lewis Oliver. This couple settled and had their children in Hanover, Virginia, then moved to Lynchburg, Virginia in the 1760's. Samuel's first born son was named John, and he settled in Campbell County, Virginia. Samuel was famous for his reading rooms, called the Morris Reading Rooms, and his role in the Great Awakening. Thus far, I have not been able to make a connection to the lines my Morris kin Y-DNA match to.

Samuel Morgan, because his parents and siblings are unknown to me, is a brick wall. I have plenty of brick walls in my family tree, so this is nothing new. William ‘Buck’ Marks, another third great grandfather, was also a brick wall and was the reason I decided to DNA test. I DNA matched to several Marks lines in Chatham County, North Carolina, all of them leading back to a William Marks and Margaret Salter. I built a research tree and started finding the documentation to connect all my matches together and ultimately ended up at the Chatham County Register of Deeds and found the paper trail that led to Buck Marks’ parents. My Morris line is not so cut and dry. The matches are either very distant or all over the place. My paternal Uncle atDNA matches to Morris lines in South Carolina, Georgia, Alabama, and even Canada! I can find nothing in common with any of the lines except the shared DNA.

Family lore tells me that Samuel Morgan was a son of Spencer and that he left Montgomery County with his family in the mid-1840s, but returned as he had fallen in love with Susan Morris and wanted to marry her. His parents objected to the marriage. Regardless of the reason, Samuel and Susan did marry, on 2 Aug 1847. William Morris, Susan’s brother, signed as bondsman. 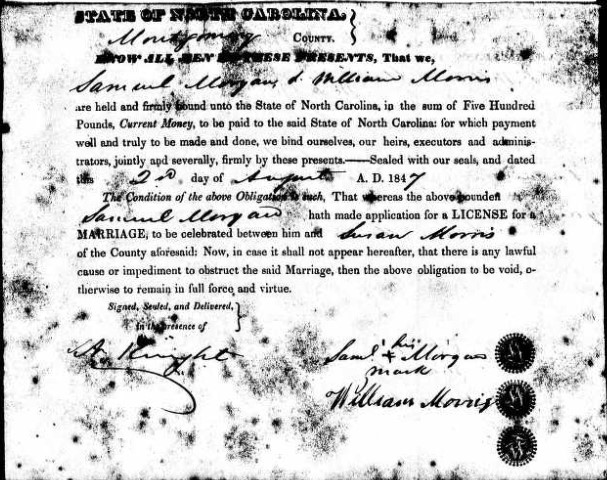 I have often wondered if Samuel Morgan could be a child of Hardy Morgan or David Morgan, who both left for Pontotoc, Mississippi in the mid-1840s? Or possibly, as noted above, Spencer Morgan, one of the other Morgan’s who left Montgomery County during this time and migrated to Kentucky? In Montgomery County court documents, in the case of Nelson Harris v Joshua Bean et al, a report taken by the Clerk of Court showed that Spencer Morgan left the county in the fall of 1845.

According to the 1850 Census, Samuel was born about 1828 in North Carolina. Susan was born about 1827, also in North Carolina. Samuel is working as a miner in the gold mines. Close by, lives Susan’s parents, John and Amelia Morris, my third great grandparents. Samuel and Susan are the parents of two children, Albert W, age 2 and John S, 2 months. William Morris, who is the brother of Susan, is living with them. He is also listed as a miner. 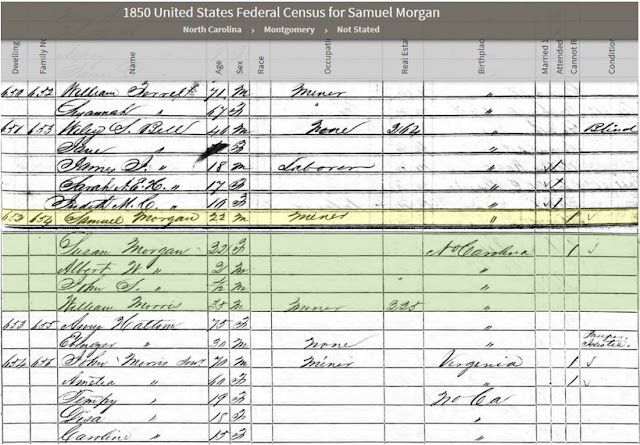 Samuel and Susan’s first child, Albert Washington Morgan, was born about 1848/9, according to the 1850 and 1860 Census, although his gravestone claims his date of birth is 15 Sep 1847, a month after his parents were married. He married Elizabeth Byrd on 21 Sep 1871. 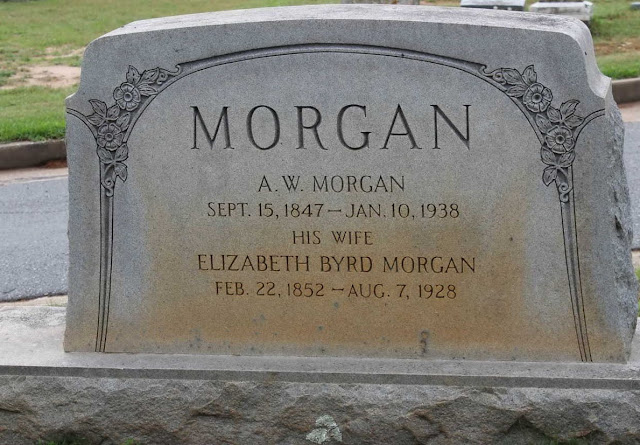 John S. Morgan, perhaps named for his maternal grandfather, was born in 1850. I am having some difficulty proving John is who I think he is. I have, in my family tree, a Nancy Dennis, born about 1851, daughter of Littleton Dennis and Sarah Talbert, who married a John Morgan. The dates fit perfectly, but I have not been able to prove the John Morgan Nancy Dennis married, is the son of Samuel and Susan Morris Morgan. More research is required on my part to find the paper trail that either proves or disproves this connection.

James Franklin Morgan, third child of Samuel and Susan Morris Morgan was born on 25 Dec 1852. He married Frances Elizabeth Tedder on Dec. 26, 1872 in Montgomery County and they had 11 children. James died 31 Jul 1914.

William Jacob Morgan was born 23 Jul 1854. He married first, Mary Frances Ridenhour, and second, Louella Swearingen. I found it interesting that on William’s death certificate, his father is listed as Charles S. Morgan. I wonder if Charles is really Samuel’s first name or if someone just reported it wrong. 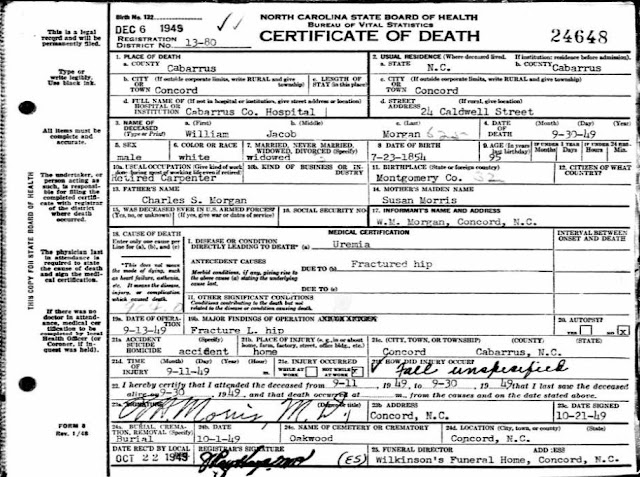 Lenora Morgan, a girl finally born to Samuel and Susan, was born in 1858. I am still trying to find information on her.

Kenneth Morgan, he would later be known as Kinney, was born in 1859. He married Sallie McDonald.

On 1 Mar 1862, in Montgomery County, Samuel enlisted as a Private in the Civil War and served on the side of the Confederacy. Samuel served in the 4th Company of Montgomery volunteers which was organized in Troy on 1 Mar 1862 under Captain John Gaines. Samuel died of sickness on or about 15 Jan 1863 in camp.

On 18 Jun 1885, Susan Morris Morgan, her oldest son, A. W. Morgan, serving as witness, applied for a pension as the widow of Samuel F. Morgan. 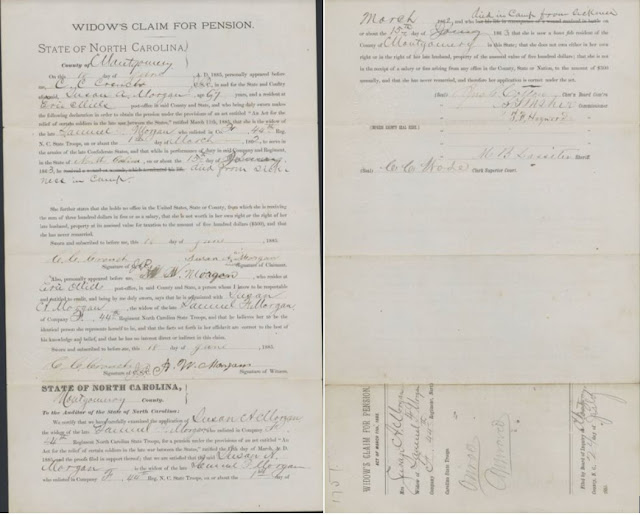 Susan Morris Morgan died on 3 Feb 1907 at the home of her son, A. W. Morgan, in Cabarrus County, North Carolina. She was buried at the First Baptist Church, originally located on Spring Street but moved to Branchview Drive in 1985 and the Spring Street building was sold to the courthouse. The Old Courthouse Theater looks to be located on the site today. The article does not say if there was a cemetery or, if so, what happened to any graves. A. W. Morgan was very much involved in the church and was on the pulpit committee in 1907 when the committee saw the Rev. R. H. Herring (noted in below articles) leave and saw the incoming of the new Pastor, Rev. S. N. Watson, who was most likely the pastor of the church when Susan died.

Susan remained a widow, remaining faithful to Samuel, who defied his family and returned from the west, if the stories be true, to marry her. 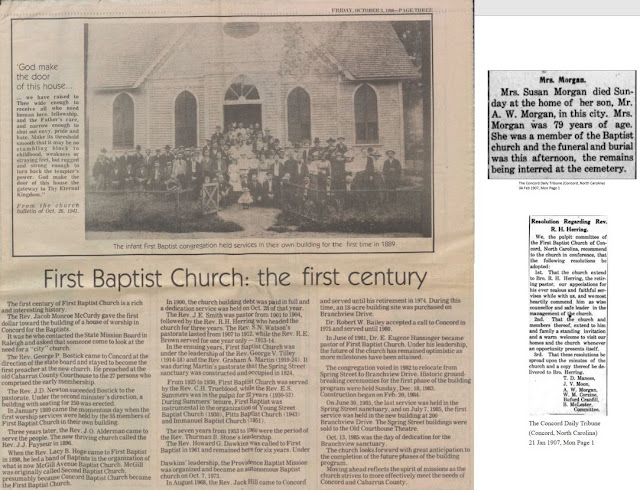 Posted by Uwharrie Roots at 8:33 AM