Exploring the Morgan's of Montgomery County, North Carolina part one

Montgomery County, located in the Piedmont region of south central North Carolina, formed in 1779 from Anson County. Named for General Richard Montgomery, a Revolutionary War brigadier, killed at the Battle of Quebec. The county divided in 1841 to form present day Stanly with the Pee Dee River as the dividing line. Early inhabitants of the region were Keyauwee and Saura (Cheraw) Indians, followed by German and Scottish settlers. The fifth county seat, Troy, was incorporated in 1852 and there seems to be a lot of controversy on who the city was named for. The majority of the Uwharrie National Forest is contained within the county. Townships include Eldorado, Ophir, Little River, Uwharrie, Troy, Star, Biscoe, Candor, Rocky Springs, Cheek Creek, and Mount Gilead with smaller communities lying inside each township.

I have only 60 Morgan family members documented in my family tree and more than 500 Ancestry DNA matches who have the surname Morgan in their family trees and even more Morgan matches on Family Tree DNA. I decided to take a break from my Marks research and attempt to make sense out of all my Morgan ancestors.

My earliest known Morgan ancestor is my fifth great grandmother, Letitia Morgan, born about 1745, died about 1840 in Montgomery County, North Carolina (the parts that became Stanly). I have no documented evidence of who her parents are or where she was born, though some researchers believe Virginia while others contend she took her first breath in Anson County. Letitia married Samuel Carter in 1769. Fifth great grandpa, Samuel, was born about 1740 in Somerset County, Maryland (a place I have visited and researched extensively for other family members).

On April 26, 1776, Samuel Carter enlisted in the Revolutionary War for 2 1/2 years. He served in the fifth Regiment, Williams Company and in the second North Carolina Battalion commanded by Colonel John Patten. Samuel made Corporal in November of 1777. He was discharged October 16, 1778. He fought in the Battle of White Plains, New York, was wounded in the battle at Germantown, Pennsylvania, a strong possibility exist that he was at Valley Forge. Samuel was granted 228 acres of land in Montgomery County (present-day Stanly County) for thirty months service. Samuel's land was on the Cloverfork Creek between Albemarle and Palestine. (Stanly County Heritage Book, page 189).

By 1790, there were six Carter families and three Morgan families listed on the Census for Montgomery County, North Carolina, two of which were Samuel Carters, and neither of which meet the age requirements for the children of Samuel and Letitia Morgan Carter. Therefore, the search continues to verify information and clearly document this Carter / Morgan line.

Samuel and Letitia Morgan Carter are buried at Old Mountain Creek Cemetery on a hill above the creek. I visited there not too long ago and saw some very old stones marking the graves of the people who are buried there alongside them. Most of the gravestones are not legible and many have sunk into the ground. 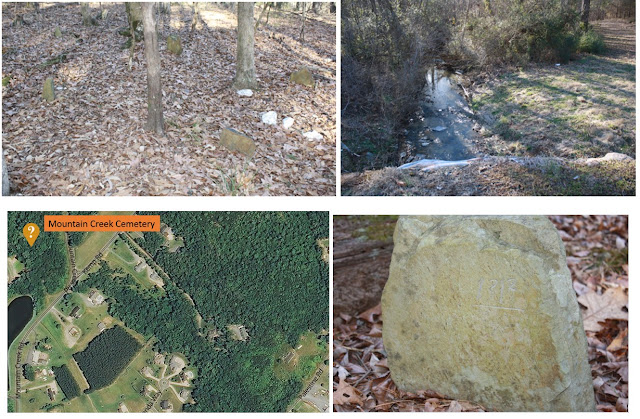