George Washington Morris, son of William Morris and Margaret Lewis, and grandson of John Jacky and Amelia Morris, lived the longest of my Morris ancestors. He was born in 1867 and died in 1969, at the age of 102 years. George was 7-years old when John Jacky Morris, his grandfather, died in 1874. So, George was sure to have had some recollection, albeit a child’s view, of John Jacky. George outlived my 2nd great grandfather, Thomas Morris, his uncle, who died in 1897. He also outlived his first cousin, my great grandfather, John Coon Morris, who died in 1945. George was in his 50s when my parents were born, and they probably had heard stories about him. Most certainly, my grandparents knew him. My grandfather died just 2 years after George. I was alive when George died, though I was just a baby. I still struggle to understand why no one in my family thought to talk to George, follow him around write down everything he said and did, take pictures of him, record his family stories. He had a wealth of history to offer on our Morris family!

In 1893, George married Letha Cotton, daughter of James Granberry Cotton and Abigale Russell, and the two settled down in Uwharrie Township of Montgomery County where George took up farming. 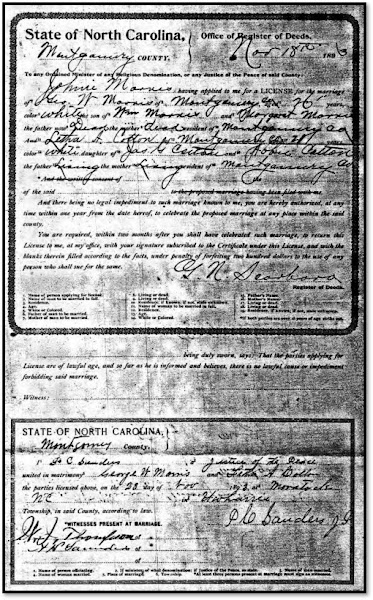 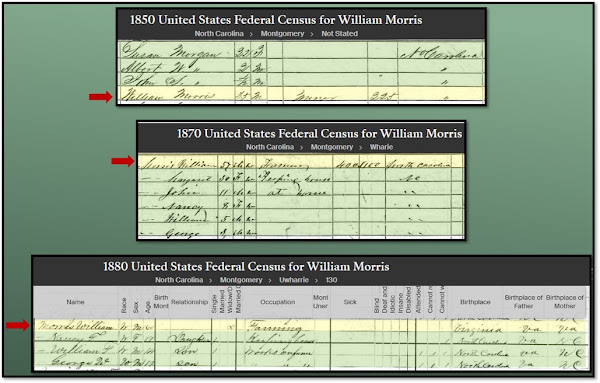 After Letha’s death, George remarried to Hattie Harris, a woman half his age, and the daughter of George and Martha Ann Ferrell Harris, in 1909. The wedding took place in Uwharrie Township, Montgomery County, at Prospect Church, officiated by George Biggs, a Minister of the Methodist faith. By 1910, George had given up farming and moved his family to Blair Street in Troy where he is shown as a Merchant.

George may have worked as a manager at the Troy Supply Company, selling a variety of items from clothing to groceries. 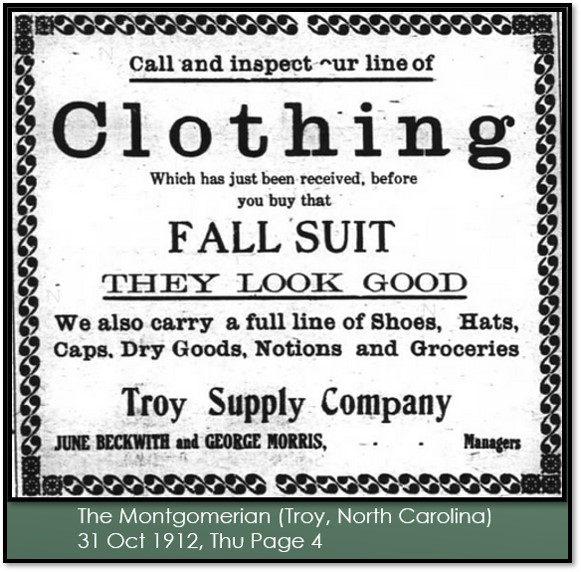 In 1967 on George’s 100th birthday, he was honored with a centennial party. At the party, he entertained with stories of gold mining fever and boats used to dredge the rivers for gold nuggets, and, of course, tales of our ancestors. According to George, our Morris ancestors came from England, settled in Virginia, and moved to Montgomery County, North Carolina in 1805.

If that is the case, my Morris family should be listed on the 1810 Census for Montgomery County. 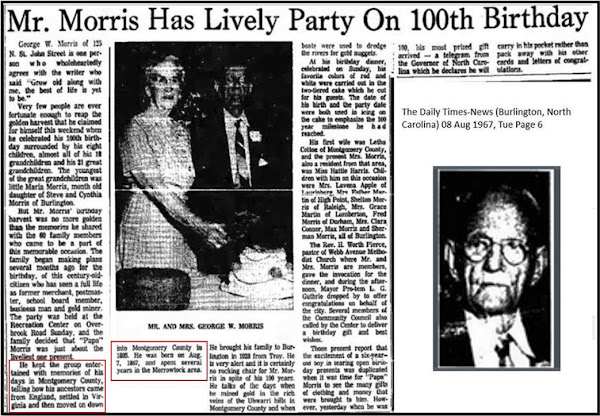 I found four Morris families on the 1810 Census for Montgomery County.

So, the next step is to see if any of the males listed are the same age as John Jacky Morris and the answer is, yes! In the household of J. Morris, is a male age 16-25. John Jacky Morris was born about 1785 and would have been about 25 years of age in 1810.

If this is John Jacky Morris, he had 4 brothers, 2 sisters, and his parents were alive in 1810 living in Montgomery County.

I do not know if this is my Morris family or not, but this is definitely a possibility I want to explore in the upcoming months.

Thanks George, for the clues!