On 7 Apr 1843, The Raleigh Register reported, on page 3, that the Montgomery County Court House (in Lawrenceville) was destroyed by fire the previous week. The fire, as modern day historians and researchers can attest, completely devastated the county. Lost were the Register books and court papers, burned were the marriage records, land records incinerated; in the course of one night, Montgomery County lost the ability to function as a government entity. The county's entire history went up in smoke. It was utterly devastating, as the Clerk of Court stated the next day in a letter to Governor John Morehead.

"Our Court House with all the records of our County were burnt on the Knight of the last day of March; the Seal of County Clerk's office is injured so much that it will not answer the purposes for which it was intended. The Seal of the Superior Court office will answer with some repairing. Please send to Fayetteville to the care of Henry Lilly a Seal for County Clerk's office 2 copies of the Revised Statues, and the acts of Legislature—and the County will pay all the expense when she gets able. There is no doubt but it was fired inten-tionally. 2 men have been committed to prison on strong circumstantial evidence who it is believed committed the crime—by the names of Elijah Spencer and Harbert Spencer--We are in a wretched situation -- by order of Court." 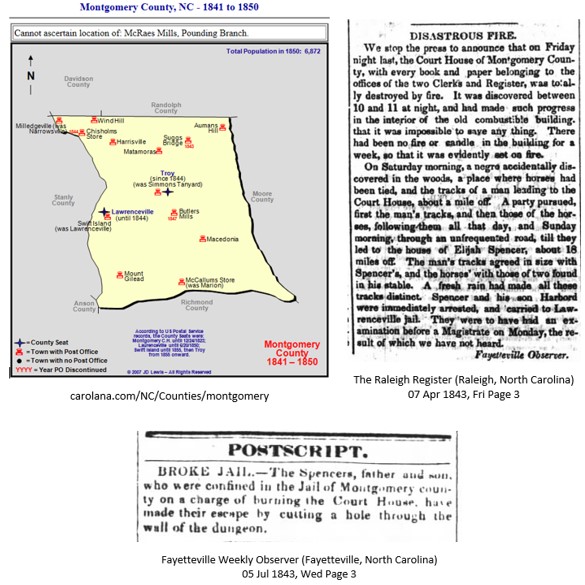 Today, historic Lawrenceville can be found at the Uwharrie Trail trailhead on Hwy 24/27 between Troy and Albemarle. Permanent depressions of old roads seen running through what was once the middle of town, stacks of rocks, undoubtedly, chimney falls of businesses or homes that once stood in town, and the old town well itself, sit silently in the Uwharrie National Forest now. The hustle and bustle of the busy town have now gone quiet and given way to hikers and campers. I am fascinated with this old town; I guess because it is where I found my third great grandfather, William Marks, making a purchase in Daniel Freeman’s General Store in 1833.

Visiting historic Lawrenceville and seeing the old road and the old well, standing in the same place my ancestors stood to make a purchase at the General Store or handle their day-to-day business at the courthouse, located across the way from the old well, was an awe-like experience for me. From that day, I was hooked on learning the history of Lawrenceville and the people who called it home.

On 21 May 1843, a few weeks after the fire that destroyed the courthouse in Lawrenceville, James Smith obtained a marriage bond to wed Electra Ann Morgan, who is believed to be the daughter of Hardy and Nancy Hearne Morgan. S. H. Christian signed as the bondsman. I am not sure where the county was holding court after the courthouse fire, but it is obvious that the local officials quickly began the recovery process to put the town of Lawrenceville back in business. 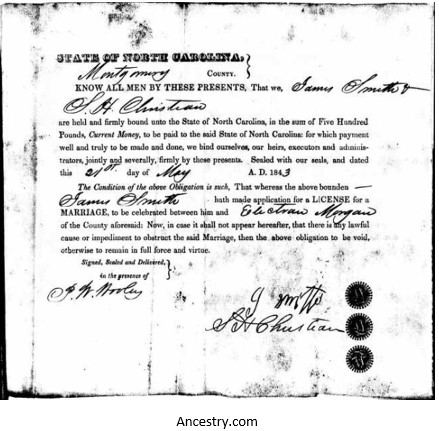 Thus far, I have found no concrete proof that Electra Ann is the daughter of Hardy and Nancy Morgan, but the circumstantial evidence certainly leads in that direction. On the 1850 Census for Pontotoc, Mississippi, I found that James and Ann Smith migrated with several other Morgan’s from North Carolina to Mississippi. Their two oldest children, Mary and Sarah, were both born in North Carolina in 1844 and 1845, respectively. The two younger children, William and James, were born in Mississippi in 1847 and 1849, respectively. James Smith is listed as 32 years old, making him born about 1818 and Ann is listed as 30 years of age, being born about 1820.

In dwelling number 1848, two houses down from Hardy Morgan, lives Nelson Morgan, also born in North Carolina, with wife Narcissa, and children Amanda, Ann, Henrietta, Alfred and Mary. More on this family in another Blog, but suffice it to say that I believe Nelson is probably the son of Hardy and Nancy Morgan, and brother to Electra Ann Morgan Smith. 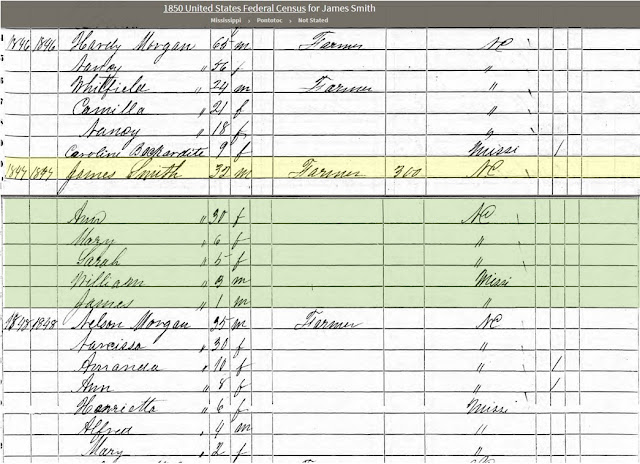 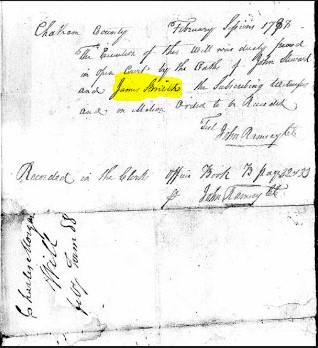 I am beginning to see why researchers who have studied the Chatham County Morgan’s believe that some of them migrated into Montgomery County. It is certainly true that Hardy Morgan did, as well as, John Stewart and his wife Rachel Morgan. If genealogy research was only finding common first and last names, this case would be solved for me. Unfortunately, just because someone has the same name does not necessarily prove they are the same person or of the same family. It is, though, a very beneficial clue and would be neglectful on my part if I did not investigate it further.

A James Smith had four land grants issued between 1780 and 1792 in Chatham County. Two of those grants were on the waters of Poke Berry (also seen as Pokeberry) Creek, a third on Wilkinsons Creek and the fourth on Cedar Creek.

Curious to know who else lived on or near Pokeberry Creek, I did a search on nclandgrants.com and discovered the infamous Mark Morgan also had a land grant for 600 acres on the Branches of Cub Creek and Pokeberry Creek in 1763, when the area was still Orange County. Chatham County would be formed from Orange in another 11 years, in 1771. Of note, Cedar Creek lies to the east and closer to what is now the Moore County line.

Updated 06-13-2020: Y-DNA testing has shown thus far that there is no connection between Mark Morgan descendants and the Hardy Morgan family.

Mark Morgan is believed to be the son of John Dorian Morgan, born about 1650 in what is now south Wales and the youngest child of Edward Morgan. In the 1680s, John emigrated to Essex County, Virginia where he settled with this wife, Hannah. Their son, John Morgan, married Ann Barbee. John and Ann settled in Essex County, Virginia in St. Ann Parish on Occypacia Creek. Ann remarried after the death of her husband to Dr. Thomas Caruthers who sold all her property rights in 1739. The family moved to Onslow County, North Carolina where Ann died. Her sons had to start over acquiring their own property.

Ann’s son, Joseph Morgan, became one of the first Judges of Onslow County, North Carolina. Another son, William became the county Constable, and son, Nathan opened a trading post in the wilderness, trading with Indians. Another son, Mark Morgan (1712-1792), obtained 400 acres in then Bladen (now Orange) County, North Carolina on October 9, 1747. The property joined the South side of Newhope on Morgan Creek. Mark lived there with his wife Sarah Hinton until his death. (http://freepages.rootsweb.com/~jentaylor/genealogy/Morgan.htm)

Another interesting article I read at townofchapelhill.org in regards to Mark Morgan tells a history of this early North Carolina Morgan family that is ‘seldom seen in the family trees that bear his name.’ Mark Morgan married Sarah Hinton of the powerful North Carolina family ‘who developed plantations and built mills along the Neuse River in eastern Wake County. Extended kin to Mark and Sarah Hinton Morgan were the Barbee (Mark Morgan’s mother was a Barbee), Alston, Hardy (or Hardee), Hunter, Johnston, Jones, Kimbrough, Lane, and Patterson families.’

These families became the movers and shakers of early Orange, and later Chatham County, who ‘had the surplus and capital to invest in land, plantations, gristmills, sawmills and slaves. Mark and Sarah Hinton Morgan had at least four children (but probably more), sons John and Hardy and daughters Anne, married Benjamin Hart and Sarah, married first John Tapley Patterson (died of smallpox in VA 1781) and second, Benjamin Yeargan (also seen as Yeargain). It was from these families that land was donated to build the University of North Carolina in Chapel Hill.’

I have not done much research on the Alston name yet, but my male cousin who Y-DNA tested for our Morgan line, Y-DNA matches to a descendant of Moses Alston Morgan from Tennessee. Collaborating with this match, I found out that Moses Alston Morgan was born 1803 and died in 1860. His parents were William Morgan and Martha Polly Reeder. The family lived in Wilson County Tennessee prior to 1800, yet Alston maintains he was born in North Carolina. It is certain that my cousin and the descendant of Moses Alston Morgan have a common ancestor. I hope to figure out how these Morgan families connect. 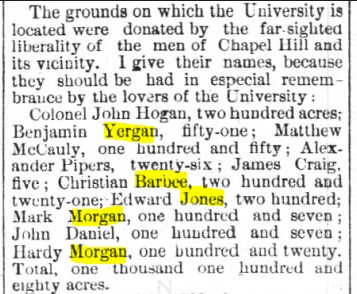 In reading through deeds in Orange County, I found a most interesting deed from David Davis to Hardy Morgan, son of Mark Morgan. Mentioned in the deed is 50 acres of land where Angelica Johnston whose husband (not named) is buried on said land and where she is to live during her natural life. Yet, another mystery, who is David Davis and Angelica Johnston? 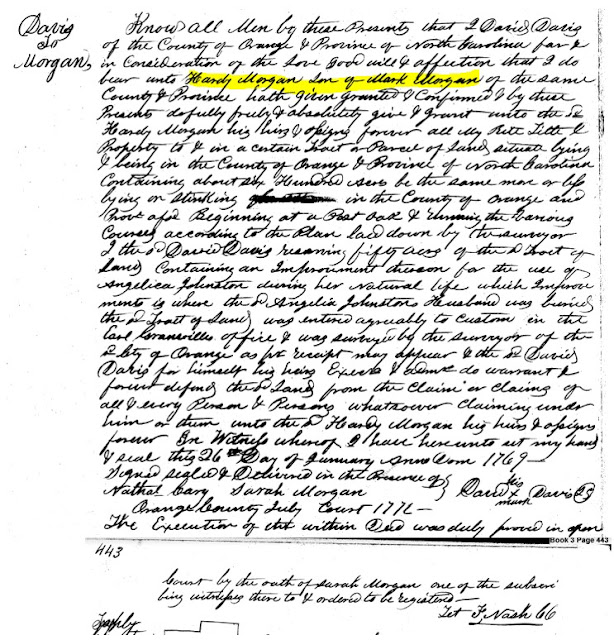 Back in Montgomery County I found three land grants to a James Smith, definitely not the James that married Electra Ann Morgan, but perhaps the father or Uncle of the James that married Electra Ann Morgan. The first grant for 50 acres of land on the north east side of Pee Dee River adjoining John Christian’s second corner. Remember, S. H. Christian signed the marriage bond for James Smith and Electran Morgan in 1843? How is S.H. Christian related to John Christian? The grant is dated 7 Jun 1799. 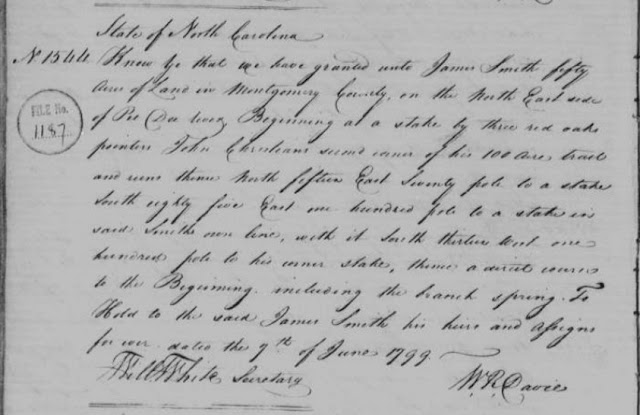 The second grant, dated 17 Feb 1801, is for 100 acres of land on the Moccosin (Moccasin) Branch of McLains (McLeans) Creek and adjoins Purnell Hearn’s corner near the Great Road (current day Hwy 109) and intersects with James Harris’ corner. The Hearn’s and the Harris’ are a whole other Blog post. I have confirmed via the War of 1812 pension file that Nancy Morgan’s (wife of Hardy Morgan) maiden name is Hearn. She descends from one of these Hearn’s in Montgomery County, however, I am not sure which Hearn as yet. 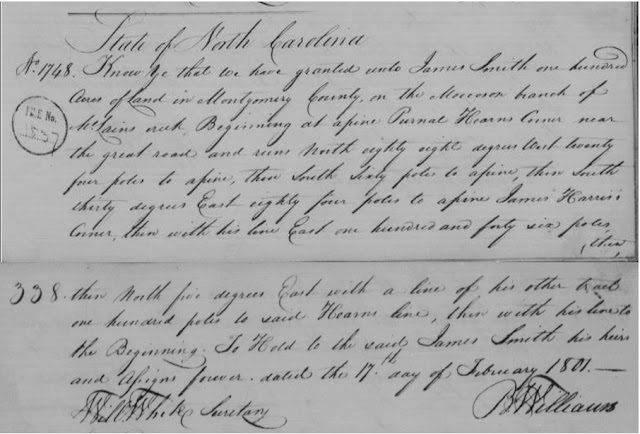 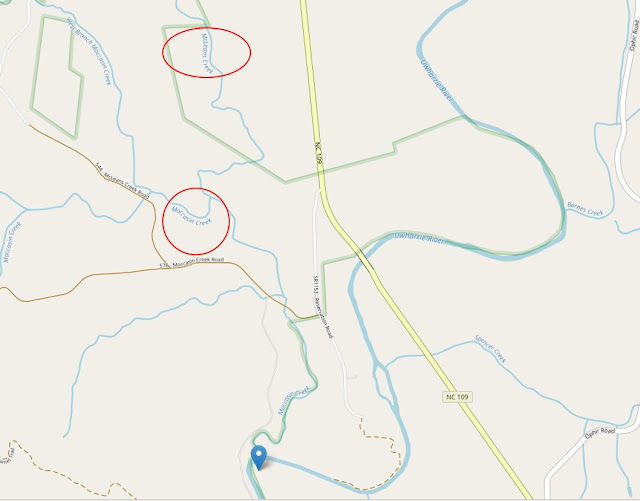 The third grant, dated 30 Nov 1801, is for 30 acres on the north east side of Pee Dee River and adjoins John Christian’s corner. The Smith’s, Christian’s, Hearn’s, and Harris’ all seem to be established in Montgomery County before Hardy Morgan’s arrival around 1805/6. Hardy married Nancy Hearn in 1807 and her War of 1812 widow pension file claims he was born in 1785. There is not much wiggle room here. Hardy would have been about 21 years old when he left Chatham County for Montgomery. 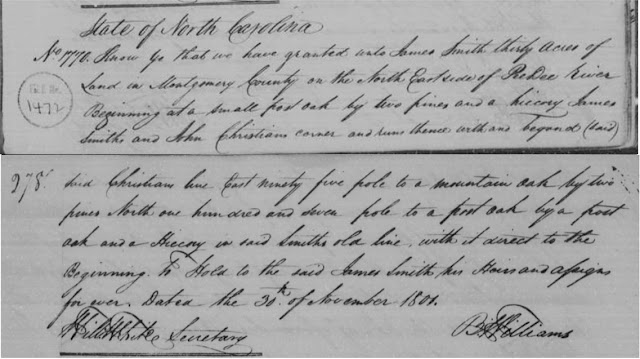 By 1860, I have lost track of James and Electra Ann Morgan Smith. However, I found their two daughters, Mary Ann and Sarah H., living with Electra Ann’s sister, Nancy, and her husband Milton Ferguson in Drew, Spring Hill, Arkansas, where most of the Morgan family settled after leaving Mississippi.

Electra Ann Morgan Smith most likely died in Mississippi, either in childbirth or from some epidemic, perhaps like the one that killed her eldest brother, Alexander. James Smith and the two male children, William and James, have eluded me thus far.

In 1880, the Donaldson’s are found in Lincoln, Smith, Arkansas. Children include James, Hugh, John, Chester, and Whitfield. Syntha (Cynthia) is missing from this Census record and it is possible that she died between the Census years. As she was only 6 months old at the 1870 Census, she is not old enough to have married by 1880; perhaps she was just missed or overlooked by the Census taker. Three of the boys, John, Chester and Whitfield all grew up to marry sisters, Edna, Gertrude and Agnus Myhand.

Posted by Uwharrie Roots at 10:00 PM No comments: