Anyone who has followed my Blog knows I have a great interest in anything pertaining to the Morgan family who lived in what is now the Uwharrie and Eldorado areas of Montgomery County, North Carolina. Mainly because they are, and have been for many years, a genealogical mystery. This Morgan line has not been researched enough to fully understand where they came from and how all the allied family members connect to each other.

While browsing through North Carolina Land Survey files at Ancestry, I found a document that has given me pause about Hardy Morgan and I wonder again whose son he is. Before finding this land survey, I had uncovered several documents that might indicate Hardy was the son of Charles Morgan who migrated from Chatham County to Montgomery County about 1805. I still hold that belief because, based on what documents I have found to date, that seems the most logical option. However, I am not opposed to changing my mind if other documentation reveals itself.

In a land survey for Montgomery County is found one of the earliest mentions outside the 1810 Census on Hardy Morgan; he and Zachariah Morgan are performing the duties of Chain Carriers in 1811 for a tract of land for William Blaylock.

The 6th day of October 1811, Will Stone, the Entry Taker for the county of Montgomery, wrote, “To the surveyor of said county greeting you are hereby required to lay off and survey according to law a tract or parcel of land containing two hundred acres for William Blaylock on Cedar Creek joining his own line and Andrew Dennis line…” 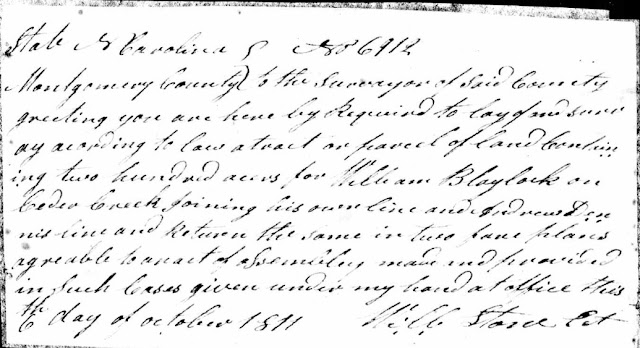 On 19 September 1813, David Cochran, then county surveyor, “surveyed and laid down a plat representing 200 acres of land in Montgomery County on the south east side of Uhara (Uwharrie) River on Cedar Creek beginning at a red oak Andrew Dennis corner and ran to his own corner…” 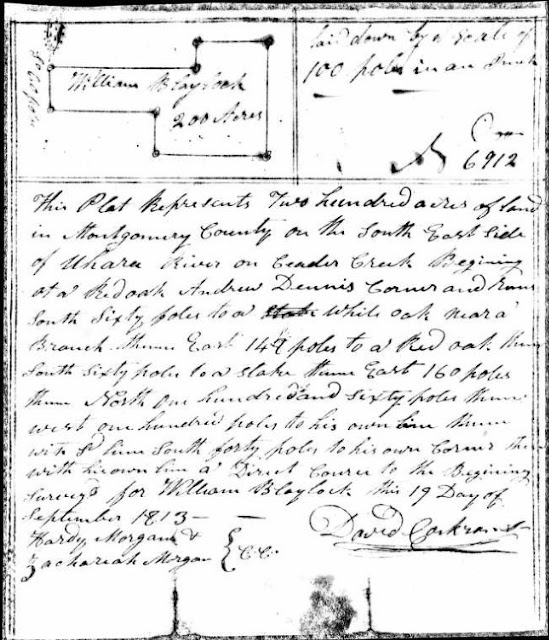 This is not the only time Hardy is found with Zachariah Morgan. In the Revolutionary War pension file of John Stewart, dated 1833, is found the deposition of Zachariah Morgan that was taken by Hardy Morgan. I know Hardy and Zachariah are related, I just do not know how.

I do know that Hardy is not Zachariah’s son because in the Revolutionary War file of John Stewart, Zachariah, in his deposition, states he was about 12 years of age at the close of the American Revolution and lived in Chatham County, North Carolina, which puts his birth year about 1771.

In Hardy Morgan’s War of 1812 file, his widow, Nancy Hearn Morgan, states that Hardy was born 1 Apr 1785 in Chatham County, North Carolina. Zachariah was 14 years old when Hardy was born so he cannot be Hardy’s father. Zachariah is either Hardy’s Uncle or his cousin.

Based on age, it is likely that Zachariah was born late in life to Charles Morgan. I do not think Zachariah is the grandson of Charles as the ages of Charles's children just cannot fit Zachariah in a timeline to be one of their children. There is only one grandchild mentioned in the will of Charles Morgan, his granddaughter, Jeane Stewart, obviously the daughter of John and Rachel Morgan Stewart. I know that Charles Morgan had other grandchildren at the time of his death though. His son Joseph had at least two young children born before 1787 and Charles Jr had at least two children born before his death in 1787, Hardy Morgan possibly being one of those children born in 1785, two years before Charles Sr died.

I am not sure why only one grandchild is mentioned in Charles Morgan’s will, but it is something that prevents me from declaring with certainty that I have the correct Morgan family. 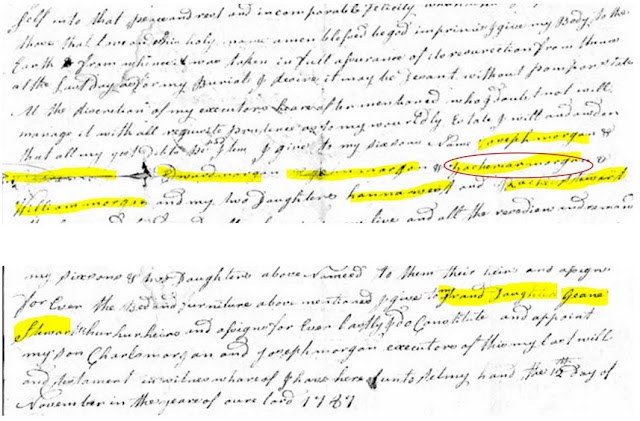 Mentioned also in the William Blaylock survey is Andrew Dennis, who is my 4th great grandfather. I descend through his son, James Dennis and his wife Mary Morgan, whom MAY be the daughter of Zachariah Morgan. Some research suggests that Mary is the daughter of Joseph and Susannah Smart Morgan, but that cannot be as Susannah is too young to be Mary’s mother (she was only 6 when Mary was born) and there is no female, Mary’s age, ever found on the Census records in the household with Joseph and/or Susannah. I think it more realistic that James Dennis married the girl next door. If Mary is the daughter of Zachariah, then that makes Zachariah my 4th great grandfather.

Like the Morgan family, I have found discrepancies with the research previously done on Andrew Dennis. Researchers cannot agree on timeline dates for his life and when dates do not add up in an ancestor’s life that usually means there is a missing generation, or we have the wrong information.

Of interest, there was a James Dennis in Anson County, North Carolina who lived on Twelve Mile Creek in the year 1762. Land Grants show his neighbor as one William Givians. There is also a George Dennis and a Nathaniel Dennis shown in early Anson County deeds. Of interest, most researchers seem to agree that Andrew Dennis’s father was named Nathaniel Dennis, however, your guess is as good as mine as to how they came up with that name.

In 1778 or 79, Andrew Dennis signed a Petition to Governor, Council and Assembly from the inhabitants of the upper end of Anson (now Montgomery) county for a division to form Montgomery County, showing that Andrew Dennis was in the Anson County area prior to 1779 and that he was older than 21 years, the legal age to have signed a petition, meaning he was born prior to 1757. The 1800 Census concurs with this record showing Andrew Dennis was older than 45 years. The 1830 Census shows him to be between 90 and 99 years of age, making him born about 1735.

Montgomery county was formed by an act of the North Carolina General Assembly of 1778 in January 1779 from Anson County. 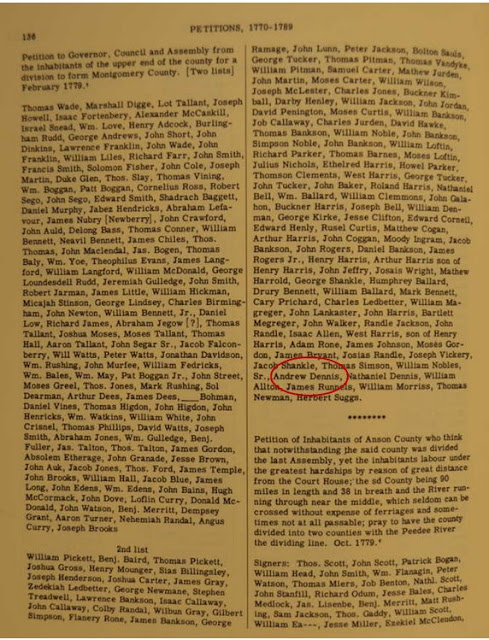 There are four land grants in the name of Andrew Dennis. Two of them are dated 11 Oct 1783. Grant number 121 is for 150 acres of land in Montgomery County on the North East side of the Yadkin River joining John Edwards, who had been granted land, 128 acres, on the North side of the Yadkin River joining his own corner and Humphrey Ballard’s, dated 11 Oct 1783.

More on John Edwards in another Blog. I am researching the Edwards family because I think they have ties back to Charles Morgan who died in 1787 in Chatham County. I also believe that a Y-DNA match from Tennessee descends from this Morgan / Edwards family.

It took me some time to find Gallon Creek as there is no mention of it on any map or old newspaper I could find. I had never heard of it before. I finally discovered an 1889 court case that states Gallon Creek is the same as Island Creek.

The defendants, in attempting to locate this grant, offered parol testimony for the purpose of showing that the beginning corner of the said Ballard grant started at a point 300 yards distant from Island Creek (which it is agreed by counsel is the same as Gallon Creek) https://casetext.com/case/bonaparte-v-carter or https://www.familysearch.org/ark:/61903/3:1:33SQ-GGTW-P76?i=406&cc=1878751 for the entire case file which tells of how Nancy Bell once owned this land. 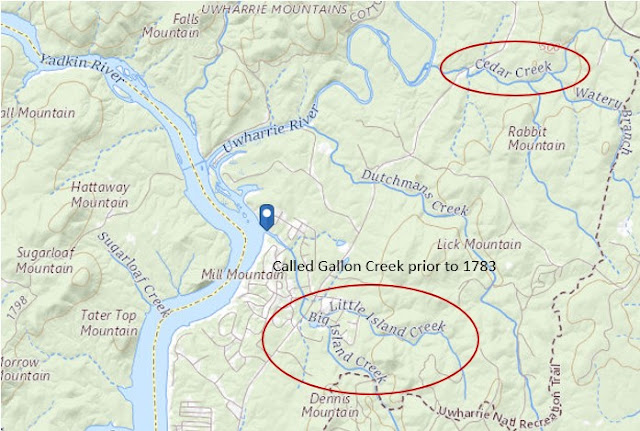 Grant number 207 for Andrew Dennis is also for 150 acres of land in Montgomery County on the East side of the Uhary (Uwharrie) River on Cedar Creek near the mouth and includes William Ballard’s improvements. No doubt, William Ballard is a relative of Humphrey Ballard.

In 1795 Andrew Dennis has another Grant for 50 acres on Cedar Creek joining Benjamin Bell, being the father-in-law of Nancy Bell who once owned the Ballard land, and John Walker. 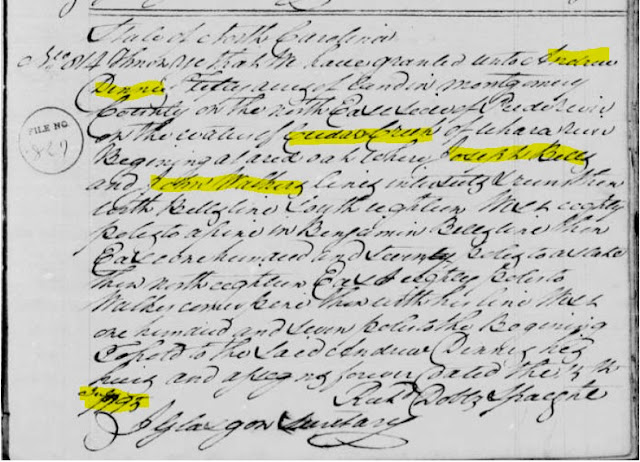 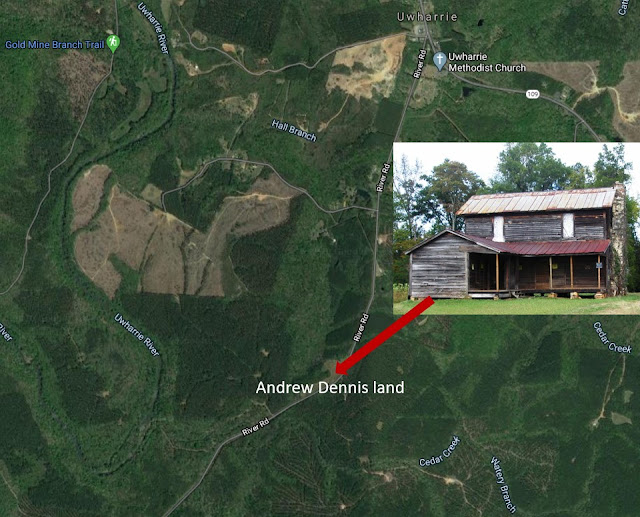 From his War of 1812 pension file found at Fold3, David Blaylock, on the 11th day of Feb 1851, appeared before a Justice of the Peace in Stanly County, created from Montgomery County in 1841, and declared that he enlisted in the War of 1812 as a Private at Henderson, Montgomery County, about the 25th day of May 1812 for a term of two years. Two witnesses, Daniel and Martha Freeman, provided a sworn statement that they knew both David and his wife Martha before and at the time of their marriage and that Martha’s maiden name is Dennis. Frances also provides a statement and makes note that she is the sister of David and that she married the brother of Martha. So, again, and not surprising, we have a situation where neighbors marry.

Frances shows up in the 1850 Census living next door to James and Mary Morgan Dennis. Her husband Jesse Dennis, dying prior to 1840.

David and Martha show up in Stanly County in 1850 and noted as living with them is Martha Dennis, the wife of Andrew Dennis and mother of Martha. She is 94 years old, making her birth year 1756, and claims she was born in Virginia.

Was Martha the first and only wife of Andrew Dennis? Is it possible that he was born in the 1750s rather than the 1730s as indicated on the 1830 Census? It certainly makes more sense that this would be the case. Is a tick mark in the wrong column on the 1830 Census possible? The 1810 Census seems to agree with Martha’s age on the 1850 Census. Land grants issued, petitions signed, the births of known children, all seem to add up that Andrew Dennis was probably born in the 1750s. Hopefully, more documentation can be uncovered to answer some of these questions.
Posted by Uwharrie Roots at 5:44 PM No comments: