At the mouth of Hall Branch

I am by no stretch of the imagination a surveyor, nor do I claim to understand all the ins and outs of 18th century (or any other century) surveys. I am just now beginning to understand how to identify a general area of where a survey was performed. In time, perhaps I will attain a level of knowledge to expand my understanding of surveys, plats, and deeds, and can transfer that knowledge here to my Blog and more importantly to my genealogical research because it is a must to understand where an ancestor lived and who the neighbors were because neighbors interacted and intermarried with each other.

A valuable piece of information I came across outlines the linear equivalents that apply when reading surveys and legal descriptions in deeds from the 18th century: 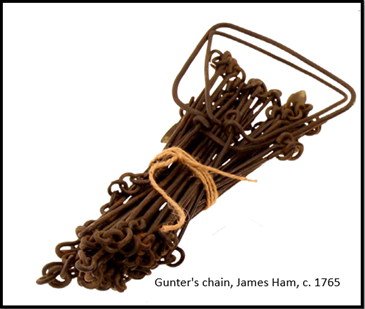 I recently purchased a program called DeedMapper and hope to utilize that software to assist me in locating property that was owned by my ancestors and incorporate that into my Blog once I learn the most effective way to apply it to my research. I also use My Maps in Google which is free and is very helpful in finding approximate locations of where ancestors lived.

Turner Harris of Montgomery County (he is highly confused with the Turner Harris of Davidson County) entered a land grant on 11 Oct 1783 for fifty acres of land in Montgomery County on the North East side of Uwharrie River beginning at a red oak near the mouth of the great (Hall) branch on Uwharrie and runs thence South seventy East one hundred Poles to a pine thence South twenty West eighty poles to a stake then North seventy West one hundred poles to a stake thence a direct course to the beginning. 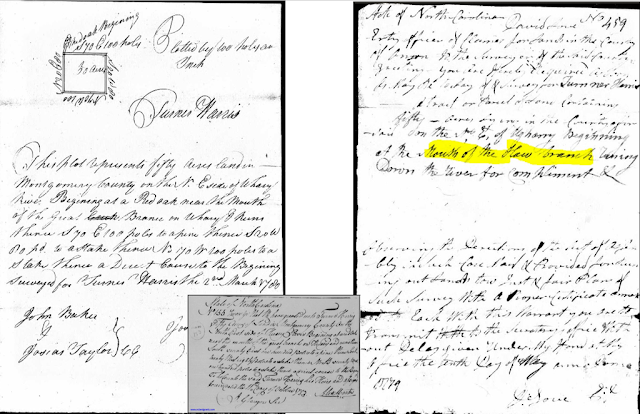 That area today is in Uwharrie, a community located in the Uwharrie National Forest of Montgomery County, North Carolina. Hall Branch runs between Riverbend Road and Morton Road and both of those roads run off River Road. You can take Reservation Road (off Hwy 109) to Cotton Place Road and follow the river until it bends (you can’t see it anymore) to see the area where Turner and Susannah Thomas Harris lived.

An excerpt from a book of Montgomery County Graveyards says of the Turner Harris cemetery: “Found in a Card File in the Randolph Room, Asheboro Library, Asheboro, North Carolina indicates a cemetery in Uwharrie National Forest, Lot 4. There are 3-4 graves, none marked. This may be the same cemetery marked E-4 in Wildlife Rev. and called Cotton Cemetery. Located in Uwharrie Wildlife Reservation on Road #555 (Cotton Place Road) that runs along the river. In a field in E-4, in a grove of trees in Field 7, 4 unmarked stones. A rubbing was made of at least one of the stones at one time and was in the files of the US Forestry Service, Troy, North Carolina. It is believed that the stone marked the grave of Turner Harris (son of West Harris and Mary Turner).”

Turner Harris, through other land grants, did eventually own 380 acres of land on both the east and west sides of Uwharrie River. The map shown below represents the general area of Entry number 459.

You can see all six of Turner’s land grants at www.nclandgrants.com 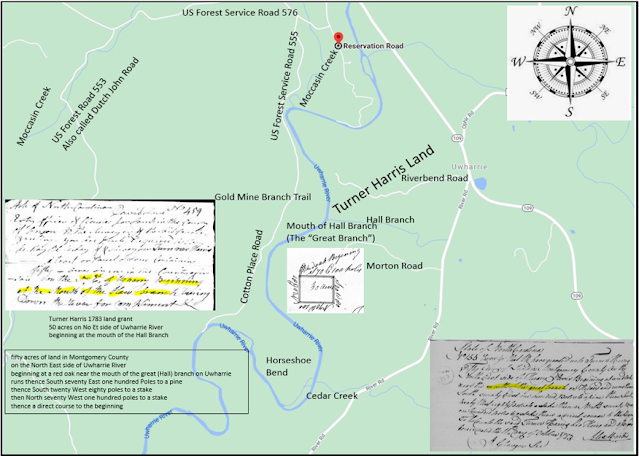 I recently was in touch with a Thomas descendant and learned of a family bible that she, through some very impressive detective work, tracked down in the town of Eden behind a fireplace mantle that had been removed for repurposing. The bible mentioned her family descending from Benjamin Thomas of Franklin County, North Carolina. The Thomas descendant succeeded in acquiring the bible and she graciously scanned and mailed me copies that are shown below.

Benjamin Thomas died in 1800 in Franklin County. Susannah is mentioned as Susannah Harris in his will. As a note, her sister, Hannah, married Richard Bell and these two sisters lived near one another in Montgomery County. I wrote about Richard Bell last year. Read that post here 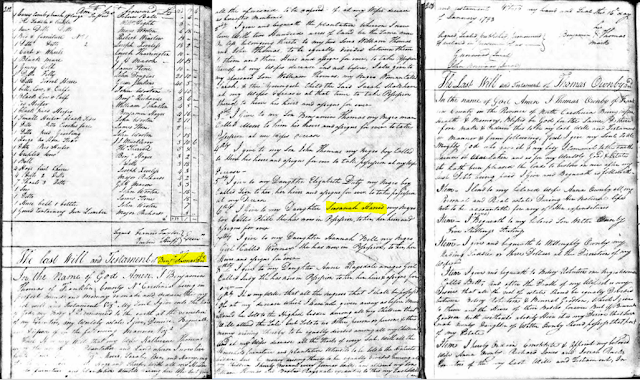 Both Turner Harris and Richard Bell were at the 1800 estate sale of Benjamin Thomas in Franklin County, North Carolina. In his will, the 9th item, Benjamin stated that only family members could purchase his slaves and no other person. Any remaining should be divided equally among his children. Turner Harris purchased a slave by the name of Milly and Richard Bell purchased Isaac.

Land Grants were not the only way that Turner Harris, or others, had acquired land. He, along with West Harris, Jesse Harris, John Baker, Thomas Williams, Joseph Bell, Richard Tillman, Cary Pritchard, and John Stewart, in 1786, petitioned for title to lands they had purchased from Henry McCulloh. According to his statement, Turner Harris had, in 1777, tried to pay for the land and receive a title, of which, John Frohock, land agent for Henry McCulloh, had refused him.

Even though McCulloh had spent only about seven years in North Carolina, he was the largest landholder, after Lord Granville, in the history of the colony or the state. According to NC Pedia, McCulloh had profited handsomely by receiving two grants of 60,000 and 72,000 acres, while a third grant of 1.2 million acres to James Huey, Murray Crymble, and their associates actually went to McCulloh since Huey and Crymble were acting as his trustees. The latter grant was awarded on the condition that six thousand protestants be settled on the land and quit rents be paid, but the contract did not have to be complied with for ten years. McCulloh's two earlier grants had also been conditioned on his paying quit rents and installing protestant settlers on the land to produce raw materials needed in England. He fell far short of meeting both obligations and was charged not only with failing to pay the rents but also with conniving with purchasers of his lands to do likewise.

McCulloh agreed to surrender extensive acreage within the tract established as the Granville district to satisfy a claim by Lord Granville. By the time his son, Henry Eustace McCulloh, arrived in 1761 as his agent, the elder McCulloh had disposed of a large percentage of his land other than the tract he was to lose in 1765. The land he retained devolved to his son, Henry Eustace, and all of it was confiscated during the American revolution despite the efforts of his great-nephew, James Iredell, to save it. The McCulloh survey book 1762-1773 by Stewart Dunaway shows a tract of land purchased by Turner Harris in 1763 when Montgomery County was still Anson County.

Plan of one hundred acres of land laid off and subdivided from a larger survey the property of Henry Eustace McCulloh lying on the Uwharrie River beginning at a Spanish oak on the bank of the river the widow McLaine's (now Sargent’s) clearing running thence So 15 Wt at 106 po crossing the river...112 po to a large w.o. on the bank...near the mouth of a branch (probably Hall Branch).

The date on the McCulloh survey for Turner Harris is 1763. It is believed that Turner Harris was born in 1746, thus making him too young to own land in 1763 as he would have only been 17 years old. I believe the date of birth for Turner Harris needs to be pushed back at least 4 years to 1742. This would put Turner at the legal age of 21 to own land. 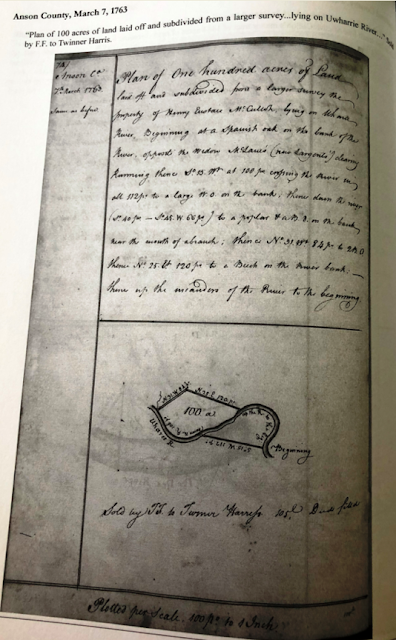 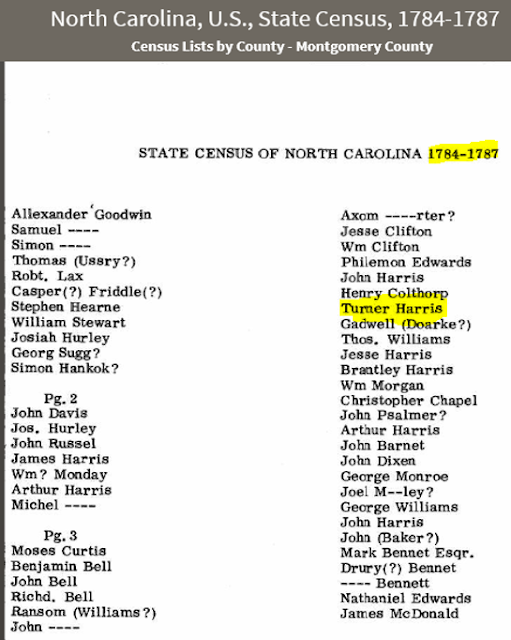 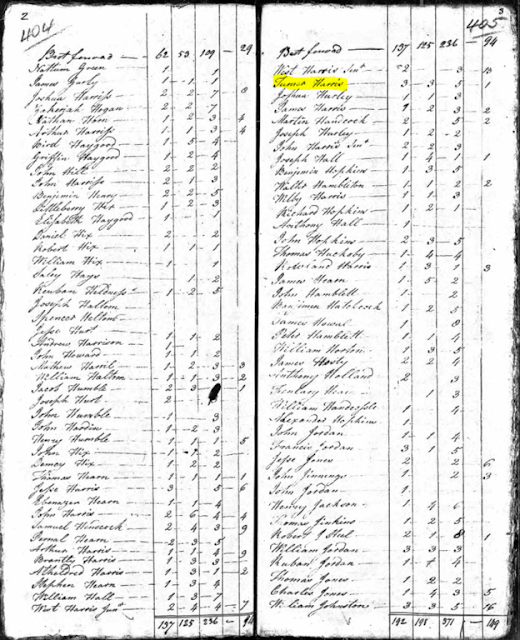 A 1794 deed that has barely survived time, shows Turner Harris selling land to Arthur Harris. Unfortunately, the deed is badly damaged, so much so that it is impossible to make out the details of where the tract of land is located. 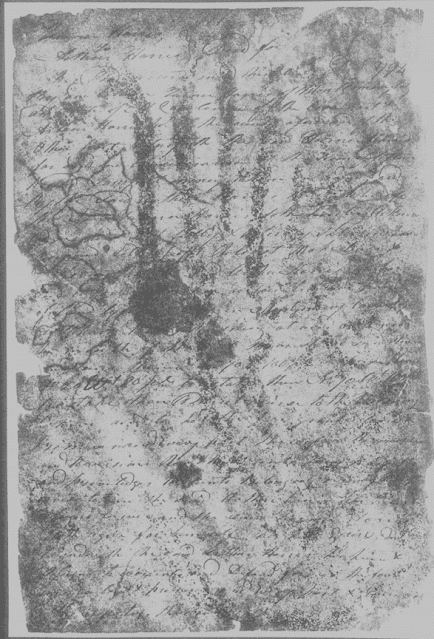 Another deed dated 1794 between Turner Harris and West Harris Jun. shows Turner selling to West Harris a tract of land in Montgomery County on the North East side of the Yadkin River at a Turkey Oak at the mouth of Hall Branch and joining John Baker’s line. Witnessed by Hiram Williams and Arthur Harris Jun. 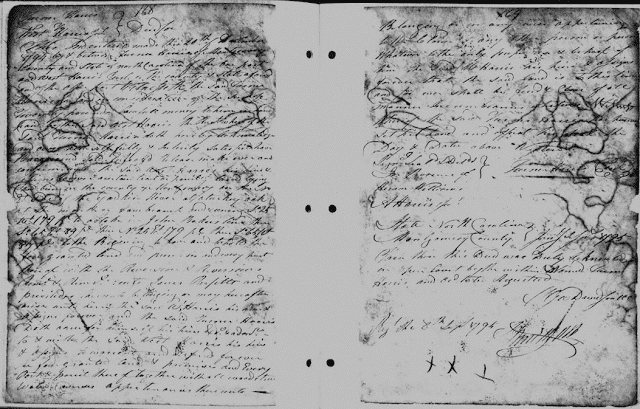 The 1800 Census shows Turner living between Joseph Hall and Wiley Harris. In his household are one male 10-15, one male 16-25, one male 45 and over, two females between 10-15, two females between 16-25, one female 45 and over and three slaves. One of those slaves probably being Milly who was purchased at the estate sale of his father-in-law Benjamin Thomas. 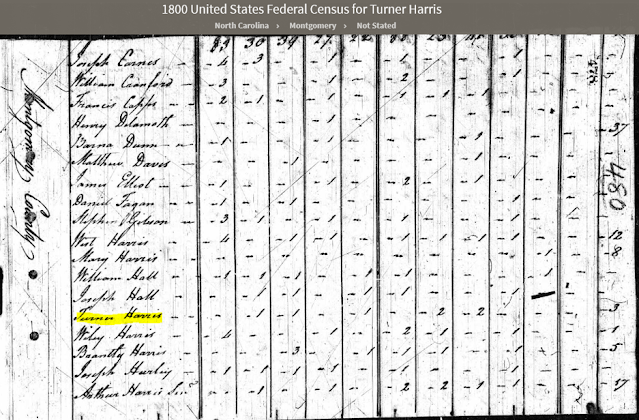 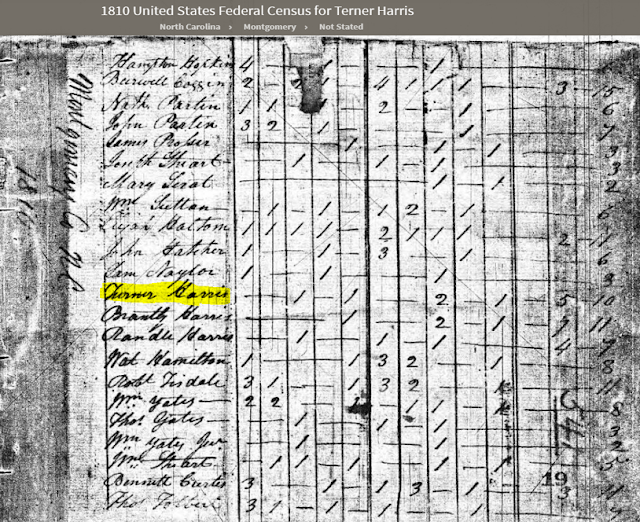 On a recent trip to the North Carolina State Archives, I found a collection titled W. K. Littleton that had several historical papers relating to the Bell family. It is among those papers that I found a receipt signed by Hardy Morgan 31 Jan 1820, “Rec'd of Benjamin Bell Sen. fourteen dollars in part of a note given by said [Benjamin Bell] to Littleton Harris, Hardy Morgan, and Salley G. Harris, Executors to Turner Harris Deceased.”

I have written extensively about Hardy Morgan on this Blog. Littleton Harris is believed to be the son of Etheldred Harris, a brother to Turner. Benjamin Bell is the brother of Richard Bell who married Hannah Thomas, sister to Susannah Thomas Harris.

At this time, Salley G. Harris is a mystery, however, as she is noted as an Executor of Turner Harris, I think she may be his second wife. 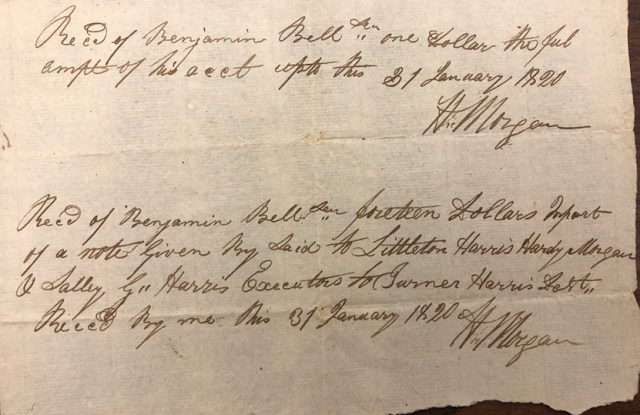 “Many years ago, old Turner Harris was father’s agent...after his death Arthur Harris the farmer died during the last war or soon after...” 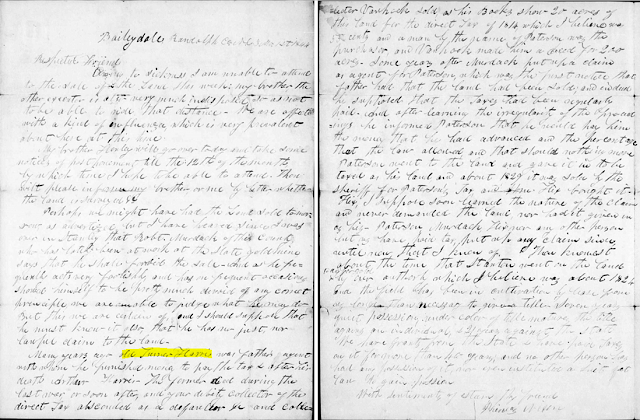 In 1908, a Notice of Land Sale was advertised in the Newspaper, The Montgomerian (Troy, North Carolina) providing the same description of the land, at the mouth of Hall Branch, that was originally granted to Turner Harris 125 years before, in 1783. 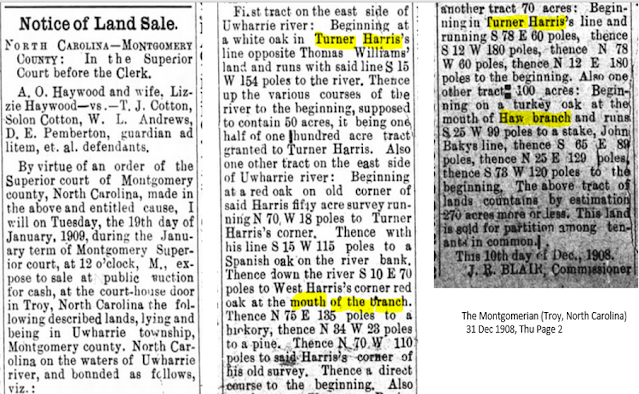 Posted by Uwharrie Roots at 3:27 PM No comments: