Since John had stated in his war file that he was born in 1762, was living in Chatham County at the time of the Revolutionary War; that is where he enlisted, I have focused my search on that area and any documents I could find on John. After reading his pension file, I suspected that John might have married a Morgan. I now needed to prove it. 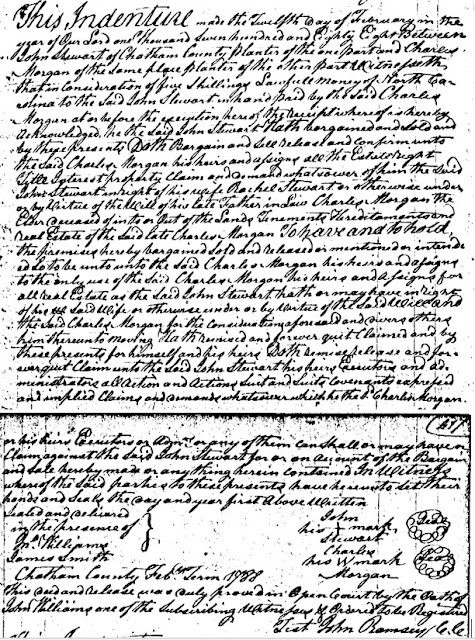 As noted in my previous Blog, Expanding the search for the Morgan’s part three, Charles Morgan (Senior), Chatham County, who left a will, had six sons and two daughters listed in his will. He leaves the house, land and mill equally divided between all eight children. He leaves a bed and furniture to his granddaughter, Geane Stewart. His sons, Charles Junior and Joseph, appointed executors and the will witnessed by John Stewart and James Smith; dated 12 Nov 1787. The will probated in February session 1788, at the same time John Stewart sold his rights to Charles Morgan (Junior) that he had in right of his wife Rachel.

In 1790, a John Stewart can be found on the Census for Montgomery County, North Carolina along with a William Stewart who may be of some relation to him (more research required). The 1790 Census for Montgomery has been partially alphabetized so I do not know if John and William lived close to one another or not. The Census shows John Stewart with one male under 16, one male over 16 (himself), four females, one being his wife, Rachel and the other three his daughters. 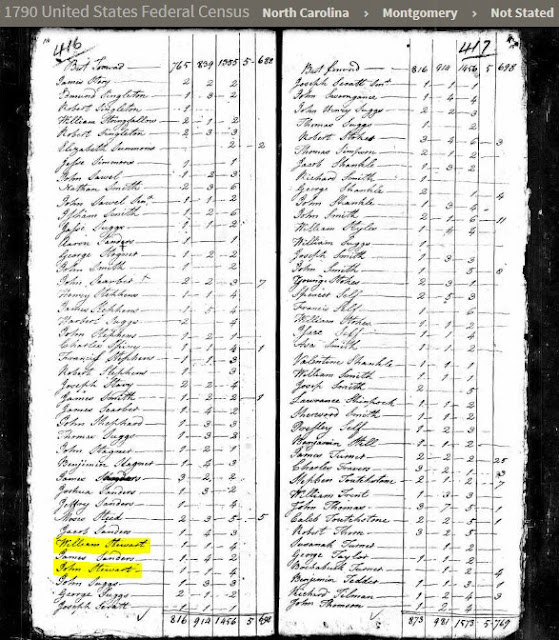 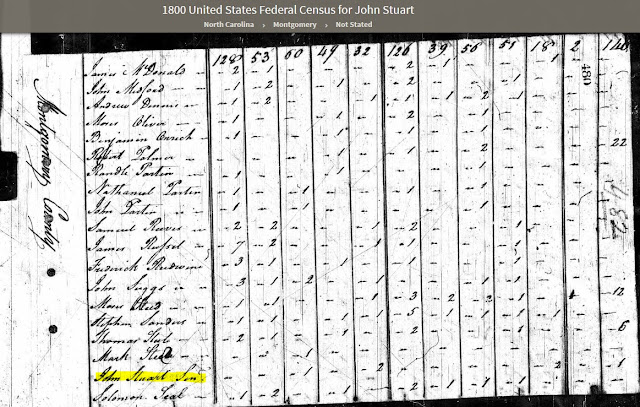 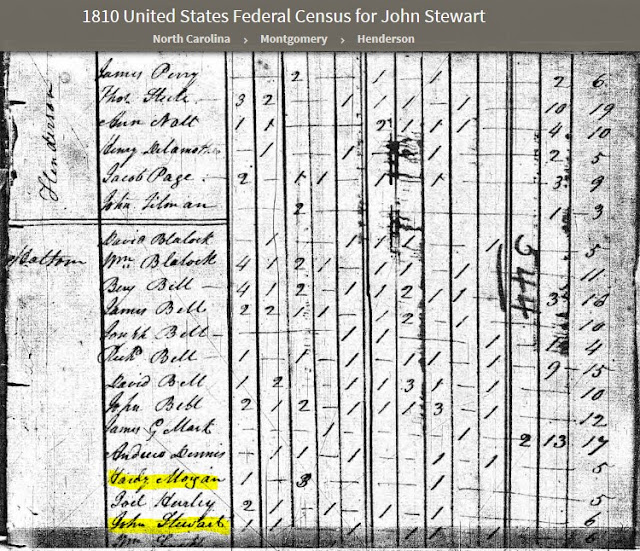 There is no Census for Montgomery County in 1820 as it was destroyed, so I am not able to track John Stewart via Census information. I have searched Newspapers, but am not able to find any mention of John Stewart. By 1833, John’s family is moving to McNairy County, TN and he files for a transfer of his Revolutionary War pension. From the file, I learned that John has an older sister named Elizabeth Russell. Investigation continues on Elizabeth to find out whom she married, as well as who her children are. 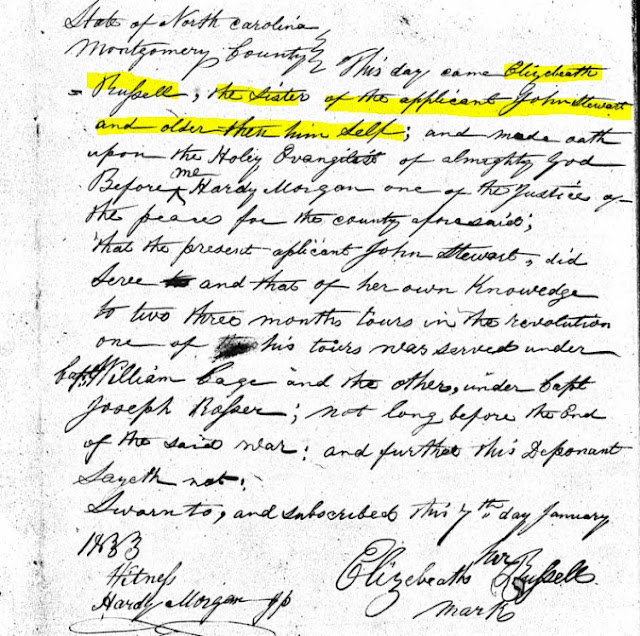 Zachariah Morgan also vouches for John Stewart, but no relationship between John and Zachariah is noted. The file does state that Zachariah was 12 or 13 years old at the close of the Revolutionary War, he would have been born around 1770. Charles Morgan’s will does note a son named Zachariah and I wonder if he is Rachel Morgan’s brother and brother-in-law to John Stewart. The ages certainly would be close enough for them to be siblings, as it is believed that Rachel was born about 1765. 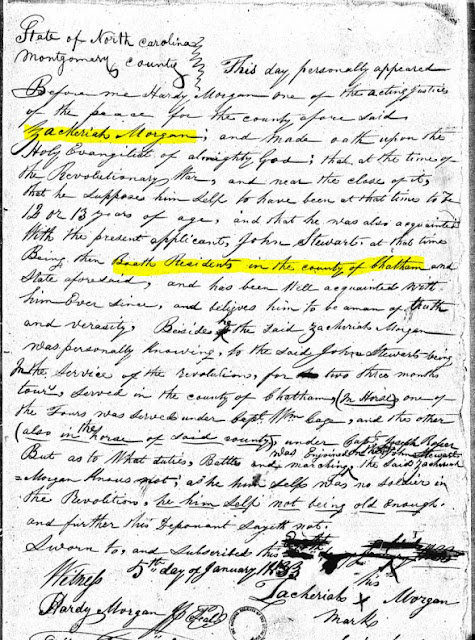 Then there is the woman, Elizabeth Nixtion, who gives her reference for John Stewart. Elizabeth is about 75 years old in 1833, making her birth year about 1758. She is only 4 years older than John Stewart is and is not his sister, as we already know that his sister, who also wrote a letter on his behalf, also named Elizabeth. My thoughts are the surname ‘Nixtion’ could be Nixon; perhaps neither Elizabeth nor Hardy knew how to spell her last name, however, there are no Nixon’s in Montgomery County in 1833. I did find one Nixon family in early records for Chatham County. Of greater interest to me is that Hardy Morgan has known Elizabeth Nixtion from his infancy. More research is required to discover who this woman is and how she connects to the Morgan and Stewart families. 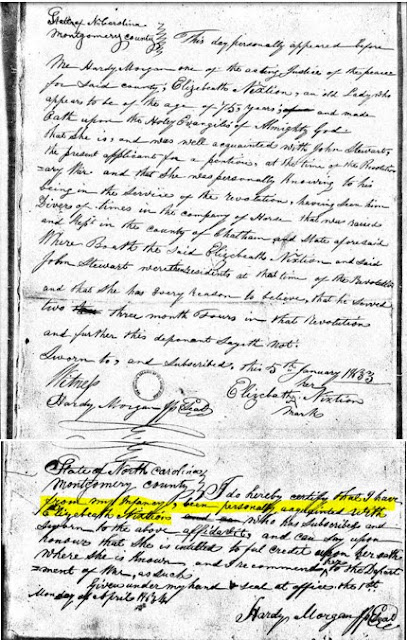 John’s Application for Transfer dated 5 Mar 1836 in McNairy County, Tennessee; states the reason for transfer is that the principle part of his children had immigrated to Tennessee and thought he could do better moving there. John, by now, is old, Rachel has probably died as no mention of her made and John’s children want to ensure his welfare. The statement leads me to believe that some of John’s children remained in Montgomery County, North Carolina, most likely daughters who have married. 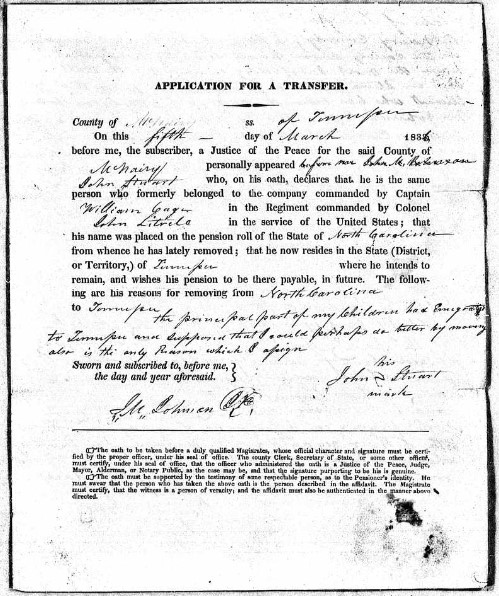 Unless or until other evidence is found, it is my belief that Rachel Morgan died in Montgomery County, North Carolina prior to 1833 and was probably buried in one of the old graveyards that are now lost to history or are under water from the flooding of the Yadkin/Pee Dee River in the early 1900s to build dams. John Stewart died in 1844 and rests in Old Montezuma Cemetery located on K Deberry Lane in Chester County, Tennessee.

Posted by Uwharrie Roots at 9:55 PM