I began Uwharrie Roots on 17 Sep 2017 as a way to explore the life of my third great grandfather, William Buck Marks. I posted my first Blog about him on 24 Sep 2017 and explored some of the options available based on my family tradition that says William Marks was hired by Michael Fesperman to tutor his children but instead ran off with his daughter, Leah, who became my third great grandmother.

Family members, over the years, had been searching for Buck Marks, where did he come from, who were his parents and siblings? Not much was known about his life prior to his marriage to my third great grandmother, Leah Caroline Fesperman in 1848/9.

I DNA tested in Aug 2017 in hopes of finding Marks DNA matches. Since then, several older members of my family have DNA tested and I have many distant cousin matches that I am investigating. Some of them I have figured out and others are still a mystery.

DNA testing provided me the link to Chatham County that I needed in order to figure out which Marks line was mine. Previously, I had found many documents containing information about the Marks family from Chatham County, but the people were just names on a page and I did not know how I related to them. DNA testing linked me to several Marks lines in Chatham County and based on the amount of DNA I shared with the other tester I knew how I related to them. I was then able to trace their lines back to the common ancestor and then forward to how the common ancestor would be related to my third great grandfather.

Let me tell you what I have discovered over the past year.

Shortly after DNA testing, I found a Marks DNA match who showed as a fourth to fifth cousin. I made contact and we began the traditional genealogy research that is required to find the family connection. My DNA cousin match had the 1865 estate record of Louisa Marks from Chatham County that listed most of the Marks family relationships – what a treasure! Included in that estate record is my third great grandfather, William Marks.

The estate records of Louisa Marks shows that Wesley Pendergrass, who was married to Louisa’s Aunt, Mary Marks, to the use of E.O. Pendergrass, made complaint against J.A. Womack, public Administrator to the estate of Louisa Marks, for a debt of some $300. Louisa, the daughter of Lucinda Marks and unknown father, was living with Wesley and Mary Marks Pendergrass at the time of her death in 1865. Wesley paid room and board, medical bills and burial expenses for both Louisa and her mother, Lucinda. He was looking for reimbursement from the estate of Louisa Marks. 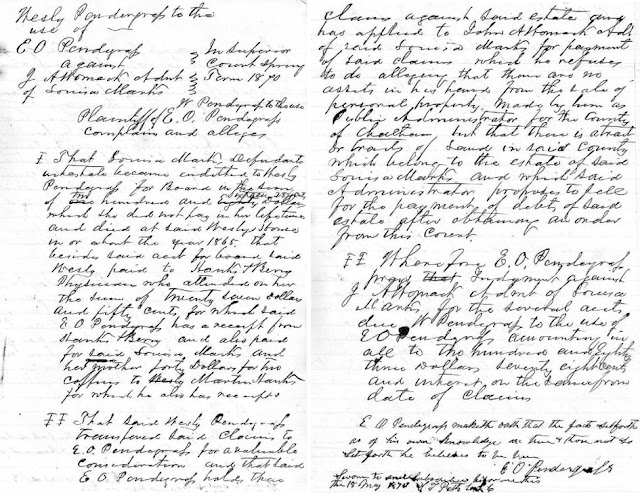 J.A. Womack, public Administrator, answered the complaint acknowledging some areas and stating he had no knowledge of other areas of the life of Louisa Marks. 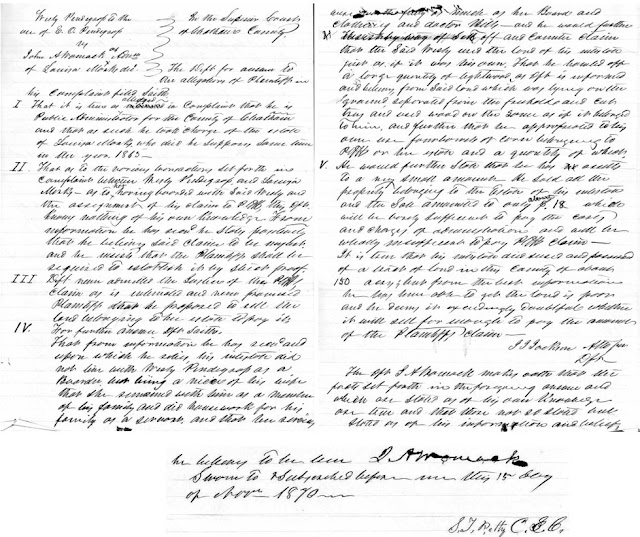 J.A. Womack believes that Susan (Marks) Burns, the Aunt of Louisa Marks, sister to Lucinda, is a material and necessary witness for him in this cause, and states that she be summoned and questioned about the work that Louisa did as a servant for Wesley Pendergrass while living at his home. Some of the handwriting is difficult to make out but it looks like Susan Burns is delayed by sickness. 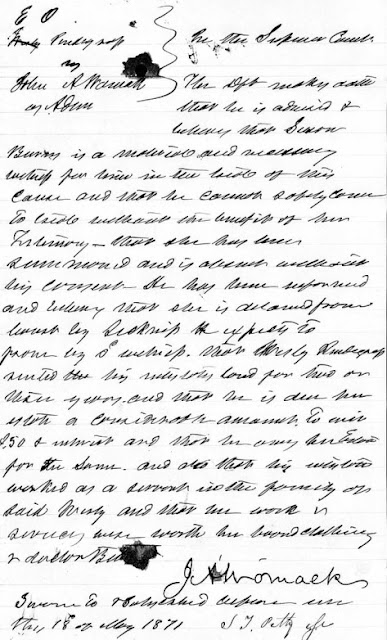 Testimony by J.S. Davis, a neighbor to Wesley Pendergrass, eludes to the fact that Louisa was a family member and that she regularly was seen working about the house and yard. So much so, that J.S. Davis says that he would be happy to clothe and board Louisa for the services she provided to Wesley Pendergrass. 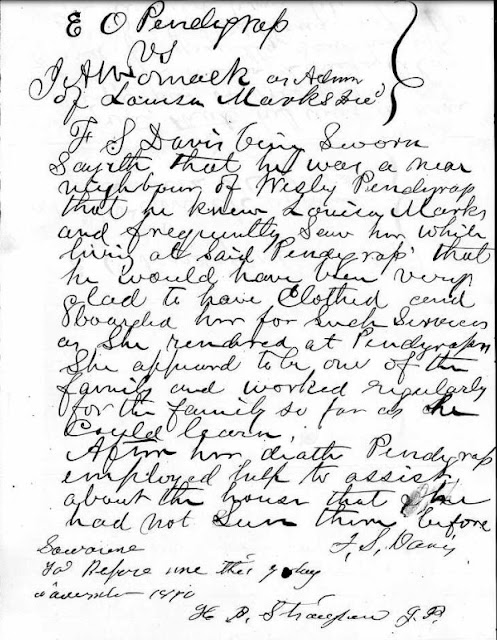 The next record in the file shows that in the spring term of 1872, Wesley’s case was dismissed. 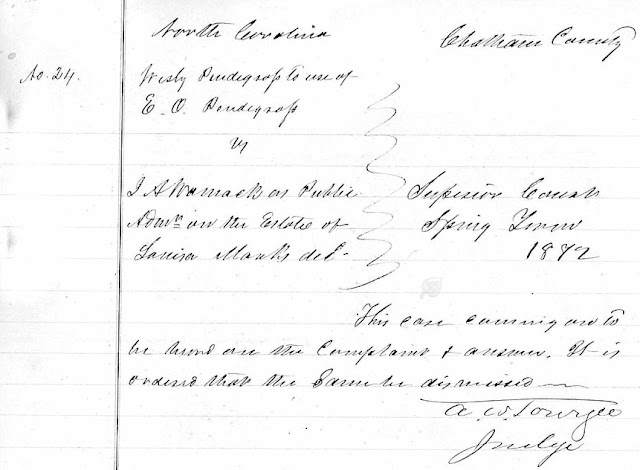 According to the court documents, Louisa was of Chatham County, she departed this life intestate (without a will), and letters of administration were granted to John Womack, who is now the defendant in the case. Louisa never married and both her mother and father are deceased and the following next of kin are entitled to her estate; William Marks (my third great grandfather), Susan Burns, Mary, wife of Wesley Pendergrass, Samuel Brewer and Asa, Bytha, Nancy and Susan Thomas who are children of Lomy Thomas, Claudia, wife of Joseph Boon, and Scott Thomas who is a grandson of said Lomy and Thomas Marks and Fanny wife of Andrew Lloyd and Lucian, William and Simeon Marks and the defendant Ewell Marks who is a non-resident of the state. 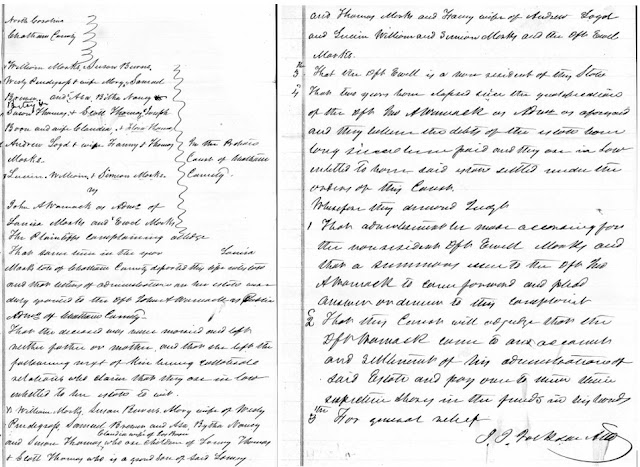 As the case unfolded, it was determined that some of the Plaintiffs are minors. Scott Thomas, Flora Thomas, and Simeon Marks are under the age of twenty-one and Wesley Pendergrass is allowed to appear on their behalf. 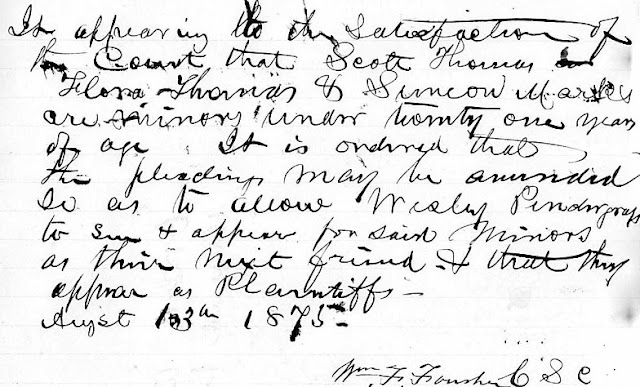 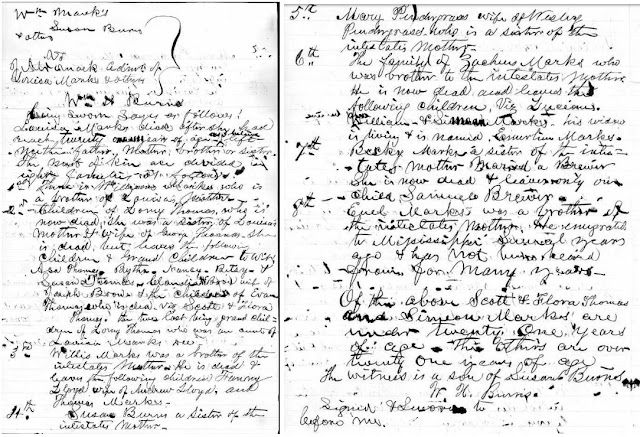 Further attempts to sort out all the relatives revealed, not only, that Ewell Marks had left town and not heard from for many years and presumed dead, but also that William Marks had moved to Montgomery or Stanly County. Finally! Proof that this was my Marks line! In 1865, the only William Marks in Montgomery or Stanly County was my third great grandfather. 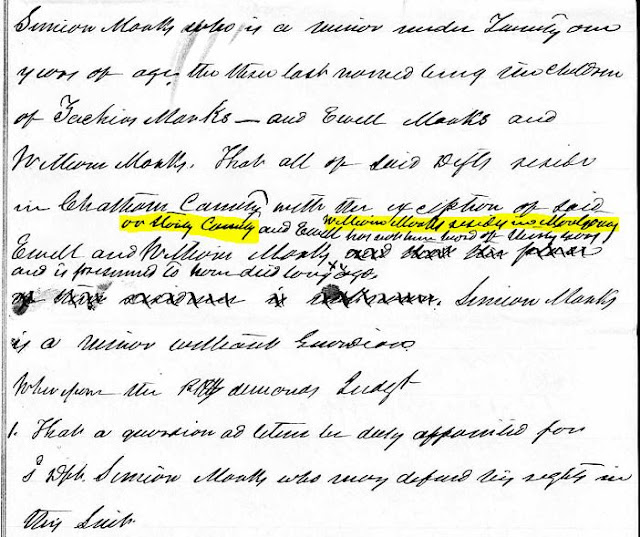 The Probate Judge, William Foushee, on 28 Apr 1875, ordered a publication in the Raleigh Weekly News, a Newspaper published in the city of Raleigh, for six weeks notifying Ewell Marks to appear at the office of the Clerk of the Superior Court within twenty days after the service of the summons.

To my knowledge, Ewell did not receive the message and never appeared. According to my research, Ewell left Chatham County as early as 1837 and is found on the Henry County, Tennessee tax list. By 1850, Ewell is married to Harriet Shelton from Tennessee and the couple are making their way to James Bayou Township, Mississippi County, Missouri where they are found on the 1860 Census with Harriet’s brother, John Shelton, an unidentified ten year old boy named Yancey Well (or Welb) and Jane Shelton, age 6. A fellow researcher and distant cousin has done some investigative work on Ewell and posted a Blog on him.

Other documents in the Louisa Marks estate file elude to a certain tract of land in Chatham County owned by Louisa Marks and lying on the waters of Rocky Branch, adjoining the lands of James Brewer, William Newsman (?), Samuel Womble and others and containing 150 acres.

Louisa obtained the land on Rocky Branch from her mother, Lucinda Marks, on 8 Mar 1860 when Lucinda conveyed it to her for and in consideration of the love and affection for my daughter…and for the sum of five dollars… the land lay close to the Lee County line on the Haywood Road (current area of Hwy 1) and near present day Moncure. Other Marks and Gunter family members lived north of Moncure, in the Pittsboro area around Roberson Creek.

Lucinda Marks, on 8 Mar 1850, is shown with two land grants, # 2213 for 241 acres of land on Rocky Branch and grant # 2214 for 99 acres of land. The land adjoins that of Micajah Burns who is Lucinda’s brother-in-law. How or where Lucinda obtained the money for the land will remain a mystery.

Lucinda sold 50 acres of land to Benjamin and Frances Williams on 20 Nov 1852 for ten dollars. Note that this deed was registered again in 1885. 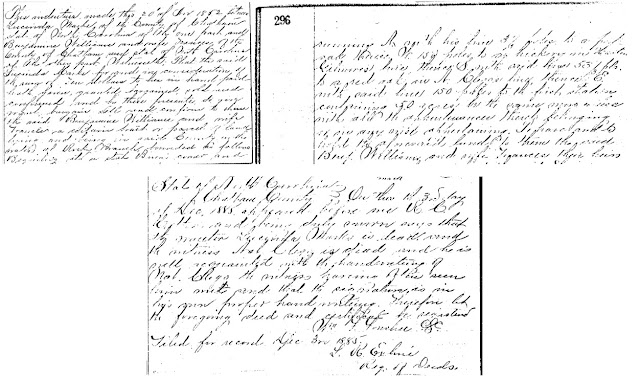 With court order in hand, J.A. Womack proceeded to sell the 150 acres of land that had been deeded to Louisa by her mother, Lucinda. Ironically, the highest bidder was Wesley Pendergrass for the sum of $430.00. The sale of the land on Rocky Branch to Wesley Pendergrass brings the estate of Louisa Marks to a close. 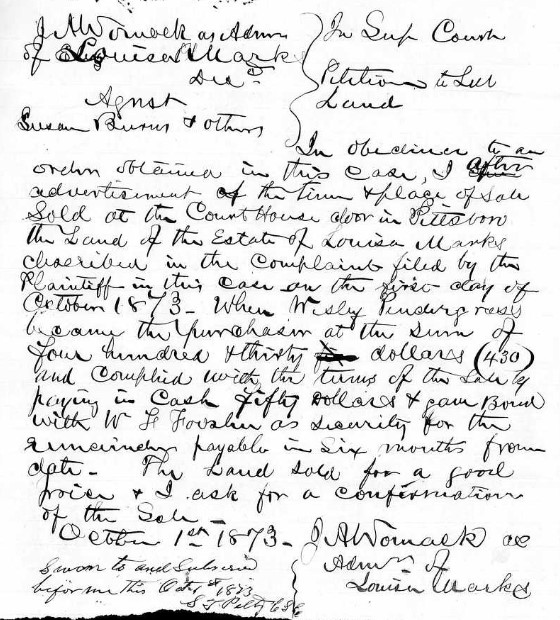 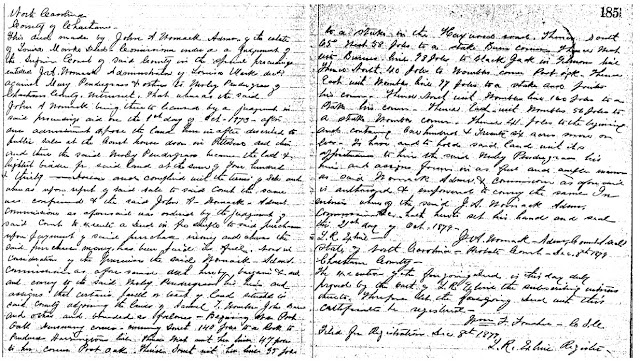 I now know who the siblings are of William Buck Marks and his nieces and nephews. However, Louisa’s case left me still wondering who Buck’s parents were. Online research offered only speculation that Buck’s parents were John and Caty Gunter Marks. Based on research that was done in the past, it was known that the daughters of Isham Gunter were Mary Marks and Caty Marks and that the sisters had married brothers, John and James Marks.

According to Isham Gunter’s will, dated 28 Sep 1818, he named and provided for all of his children. In 1834, Isham added a codicil to his will giving his grandson, Ewell Marks, property for the purpose of support to Mary Marks, Ewell’s mother. Isham’s will was probated in Jun 1834. 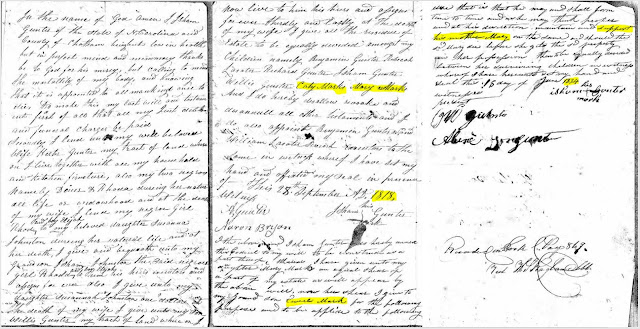 It has been speculated for years that the reason Isham Gunter provided for Mary as he did was because her husband had died early. Based on the Census information, everyone knew that John Marks was alive and based on records from Daniel Freeman's store ledger, John Marks was known to have resided in Montgomery County. John even signed the petition in 1838 to divide Montgomery to form Stanly County.

So, it was assumed that James Marks had died, leaving no estate, and Isham was trying to provide for his daughter, Mary, and grandchildren. An assumption was made that Mary Gunter married James Marks and Caty Gunter married John Marks and William Buck Marks was the son of John and Caty Gunter Marks who had migrated to Montgomery County, North Carolina in the early 1830s probably in search of a fortune in the gold mines in that area. It seemed reasonable.

As you can read on the Blog, I had accepted this fate as well. No amount of looking seemed to turn up any document that could prove John Marks married Caty Gunter and thus were my fourth great grand parents. I had moved on to researching another brick wall ancestor, Joseph Morgan.

Not long ago, a fellow researcher invited me to go along with her to Chatham County on a research trip. While there, we would see what we could find on the Marks of Chatham County. So, off we went to Chatham and began our search in the Register of Deeds office.

In a matter of hours we turned up a deed dated 25 Nov 1831 between John Marks, Thomas Thompson, and Abner Gunter Sr all of the county of Chatham and state of North Carolina…whereas the said John Marks has made his note payable to the said Abner Gunter for the sum of thirty five dollars due the 25th of Dec 1832…that John Marks honestly desires to secure to the said Abner the payment of the same, and whereas the said John Marks is by marriage and respect of his wife Mary, one of the legatees of Isham Gunter Senior, and at his death will be entitled to a legatees part in his estate, now therefore and in consideration of the promises...the said John Marks hath given, granted, bargained and sold unto the said Thomas Thompson...all my right title and interest which I may hereafter have in right of my wife Mary in the estate of...Isham Gunter. 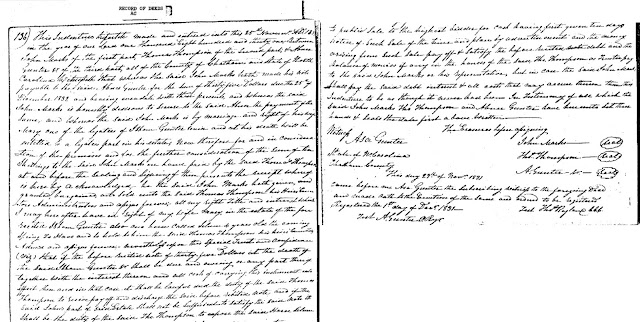 Through DNA testing, traditional genealogy research and sheer perseverance, I have found the parents and siblings of William Buck Marks and my fourth great grandparents, John Marks and Mary Gunter.

Now the question is, why was John Marks and William Buck Marks in Montgomery County with Caty Gunter Marks instead of in Chatham County with Mary Gunter Marks?
Posted by Uwharrie Roots at 8:10 PM