Ever since finding out that Caroline Morgan, the daughter of Col Hardy Morgan, married Colin Beckerdite, I have been on a quest to figure out how they possibly could have met. To the best of my knowledge, there were no Beckerdite’s in Montgomery County, North Carolina until after 1850. In 1853, Elmira Hall, daughter of John and Nancy (Hill) Hall of Davidson County, married Benjamin Lindsey Beckerdite in Montgomery County. Lindsey is the son of John Beckerdite and Elizabeth Yokley of Randolph County.

By 1880, Lindsey and Elmira are in Stanly County.

A John Hall died from Dropsy in 1870 in Eldorado, Montgomery County, North Carolina and is found on the U.S. Federal Census Mortality Schedules. His age is listed as 56, making him born about 1814. This John Hall may be the father of Elmira Hall Beckerdite.

Another John Hall migrated into Montgomery County from Randolph County around 1840 when he bought three tracts of land, a saw and a grist mill from Ebenezer Morgan. This may be the John Hall that would become known as 'One Arm' John after he lost part of his arm in 1857 due to an incident that happened at his mill.

'One Arm' John Hall was the son of James Hall and Hannah Kearns. He had a brother named William. 'One Arm' John had 11 children by Frances Steed, 6 by Margaret Talbert and 5 by Margaret's sister, Sarah Talbert. He was never legally married to Sarah. 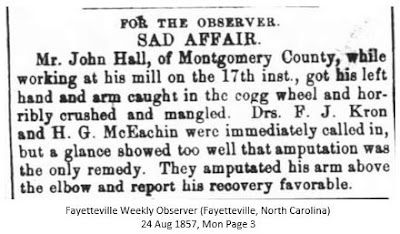 In my post E.F. Morgan, I wrote about Ebenezer Morgan selling land to John Hall from Randolph County for the sum of $725, and lying on the east bank of Barnes Creek, land that included a Grist Mill and a Saw Mill. Two other tracts of land, known to many as the McCullough tract and Spencer tract, sold to John Hall at this same time. 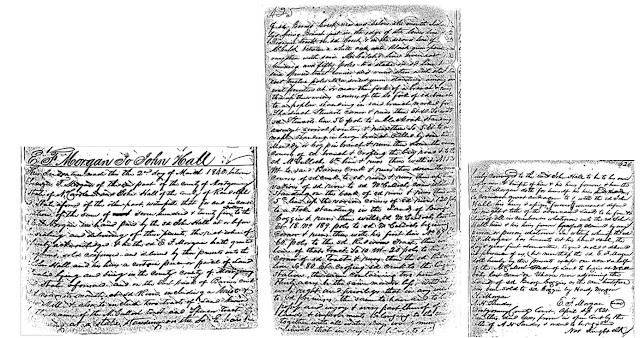 The metes and bounds described in the deed states ‘sd river’ but the river is never actually named. However, the deed does state from the beginning that the land begins on the east bank of Barnes Creek at and near its mouth of sd river. There is no other river there except the Uwharrie River. Of interest to me is that the land adjoins the corner of Shadrach Stewart, who is most likely the son of John Stewart who married Rachel Morgan, the daughter of Charles Morgan, Chatham County. 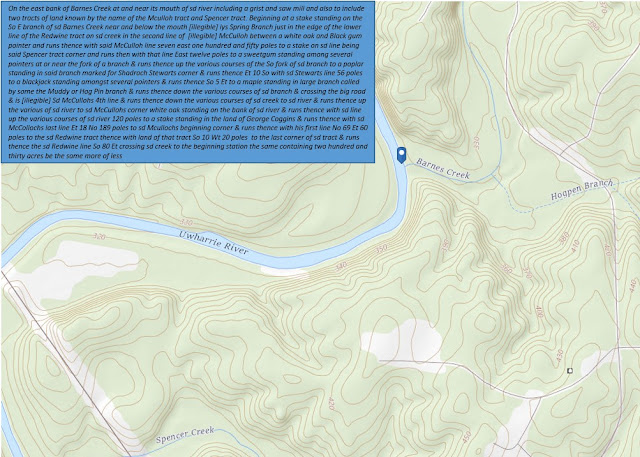 Currently, the confirmed children of Hardy Morgan are Caroline, the Newspaper article dated 1843 telling of her death in Mississippi states she is the daughter of col. H. Morgan, Montgomery county, N.C. Hardy and Nancy Morgan’s other confirmed children are Whitfield, Camilla and Nancy, all found on the 1850 Census in Pontotoc, Mississippi.

Hardy Morgan made his first appearance in Montgomery County on the 1810 Census. It appears he is newly married, about 25 years old. Hardy is living in Hattom, located close to Henderson, and shows one male child under the age of ten years. The child is most likely Alexander Morgan who was born in Old Henderson and died in New Albany, Mississippi in 1860. Hardy was born about 1785 so prior to 1810; he most likely was living at home with his parents. The big questions are who are his parents? Is he new to Montgomery County or has he lived there all or most of his life? 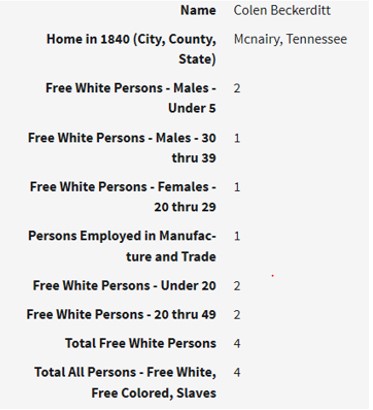 The death notice for Caroline asked that the Salisbury, Asheboro and Fayetteville N.C. papers copy, most likely, so that the family back home would know of Caroline’s death. I found it curious that the Asheboro papers were mentioned. Who did the Morgan or Beckerdite families know in Randolph County that would be interested in such family news?

In Randolph County, North Carolina, I found the estate papers of Amos Beckerdite who died Sep 1815. Mary Beckerdite, Amos’ widow, was petitioning the court for her dower rights. The underage children are provided a guardian and are listed as John Beckerdite, Colin Beckerdite and Mary (Polly) Beckerdite. On the early court papers, John is listed and the later court records Emsley is listed. I am considering the possibility that John Emsley is one and the same person, just going by his first name at an earlier age and then by his middle name as he gets older. Such is the case for Mary mentioned as Polly in the earlier record but Mary in the later.

From the court record, the guardian of the children changed at least three times. The first being William Ingram in 1815, the second being Joshua Crow in 1818, and the third being Charles Steed in 1825. 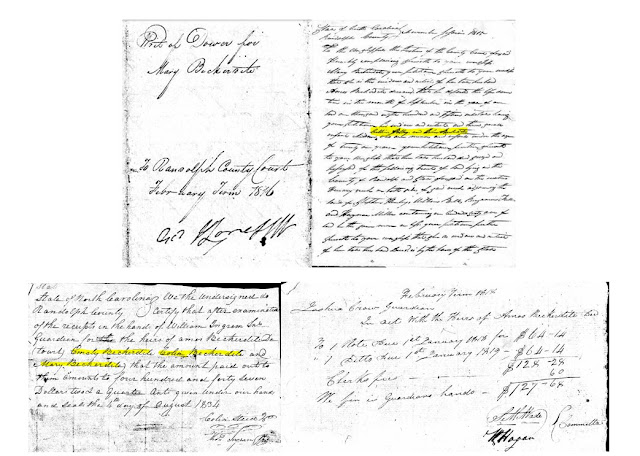 As was the usual process, when a widow petitioned the court for her dower, several men, usually free-holders, who had no connection to the widow, were enlisted to survey the lands of the deceased. Their job was to lay off and allot one third of the land to the widow, in this case 66 acres, as well as inventory the crop, stock and goods for one year’s supply of provisions for the family. The remainder of the land and estate was sold and the money divided between the heirs-at-law.

Of the free-holders enlisted to lay off land and provisions for the widow Mary Beckerdite, one name caught my eye, Phinehas Nixon. In my Blog John Stewart and Rachel Morgan I made mention of a woman who provided a letter of reference to John Stewart for his Revolutionary War pension transfer from North Carolina to Tennessee, Elizabeth Nixon (Hardy Morgan had spelled her surname as Nixtion). Hardy Morgan had stated that he had known this woman from his infancy. I was curious to find out who the Nixon woman was because there were no Nixon’s in Montgomery County and if Hardy had known her from his infancy, where did he know her from?

Unfortunately, the only watercourse listed in the dower record is the Uwharrie River and there are no neighbors listed, so I have no clues in this record that would lead me to locate where the land of Amos Beckerdite was other than being on the Uwharrie River. 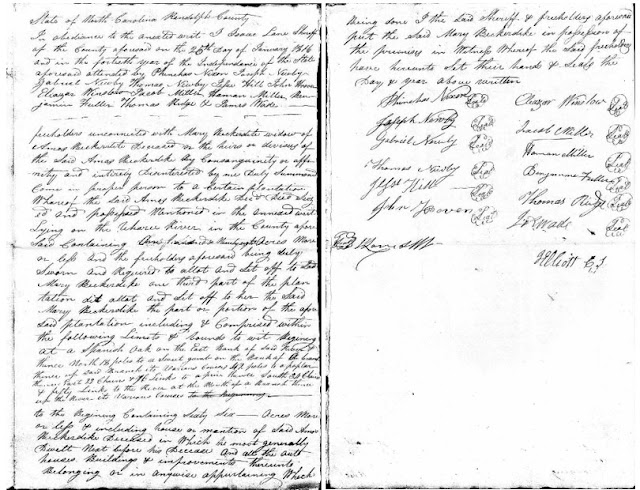 Phinehas Nixon was of the Quaker community in Randolph County, NC and his name is found repeatedly in the Randolph County Back Creek Monthly Meeting Men´s Minutes, 1792-1840. In just one meeting, he was listed five times. 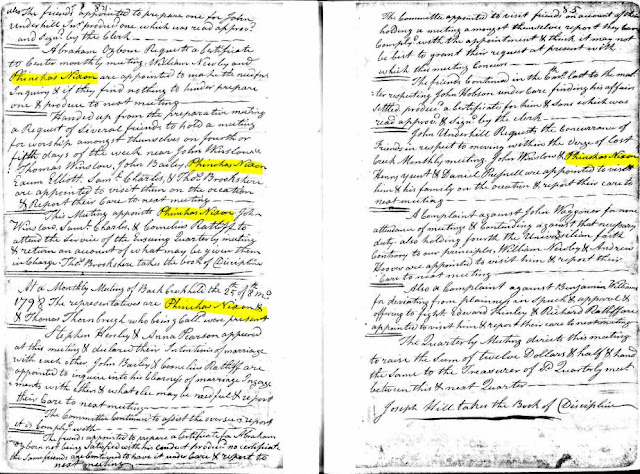 A Phinehas Nixon is found in the North Carolina, 1784-1787 State Census in Perquimans County. A Phinehas Nixon has two land grants for Montgomery County, North Carolina. Grant number 855 that was altered by a court order that I am not able to find, entered 1793, issued 1795, for 200 acres on Long Creek (current area of Stanly County) and grant number 900, entered 1794 and issued 1795, for 100 acres of land on Long Creek. 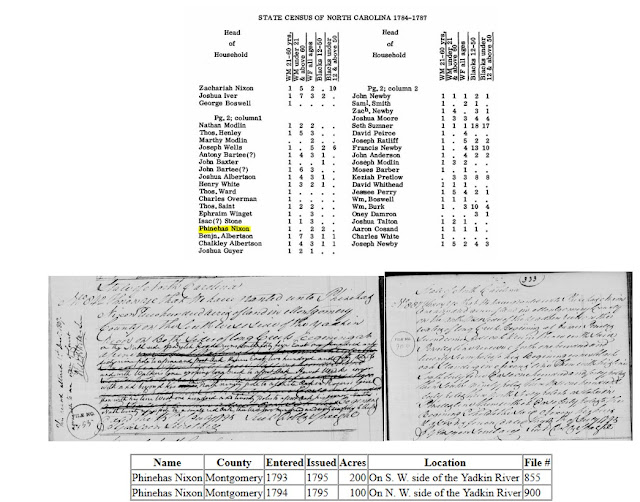 Long Creek, as its name implies, is a long creek. It is located on the west side of the Pee Dee River and flows nearly through the entirety of Stanly County. According to the means of travel in the late 1700 to early 1800s, Long Creek was far from Barnes Creek on the east side of the Pee Dee River, where the Morgan’s lived. By 1790, Phineas Nixon is located in Randolph County. 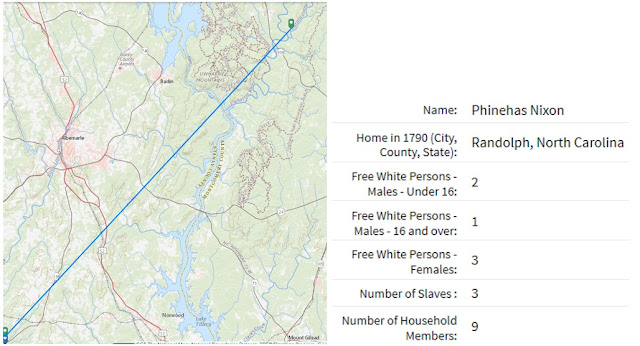 So, it does not appear that Phinehas Nixon ever lived on the land in Montgomery County, but rather, he chose to live on Caraway Creek in Randolph County, on land that adjoined the Beckerdite’s, the Rush’s and the Moore’s. I do not know how the Beckerdite’s acquired their land as I am not able to find a land grant for that surname (I tried various spellings on the searches). There are land grants for the Rush’s and the Moore’s that can be found at nclandgrants.com.

Caraway Creek is located on the Uwharrie River in Randolph County some 15 miles north of Barnes Creek, where the Morgan’s lived in Montgomery County. Barnes Creek is mostly located in Montgomery County but does run into Randolph County. It is not far-fetched to wonder if Hardy Morgan once lived in Randolph County. Alternatively, perhaps there was a trading post between the areas of Caraway Creek and Barnes Creek or a church community where all these families met. It is certain that the people of these two areas interacted with one another as Caroline Morgan met and married Colin Beckerdite. Somehow, they knew each other. 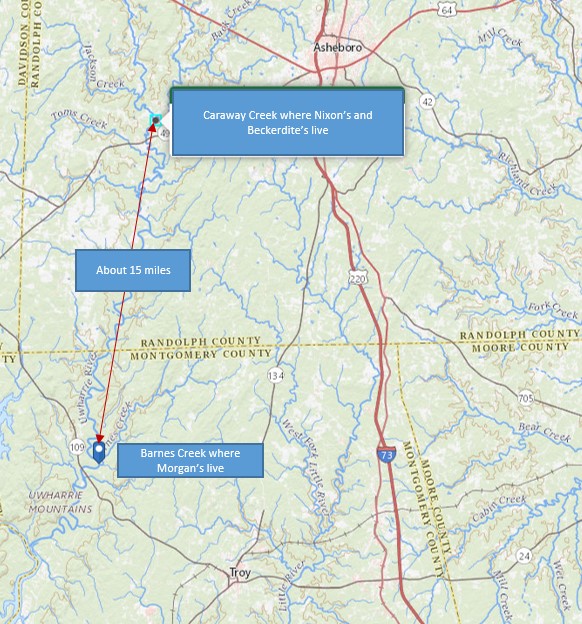 I finally found the estate record for Phinehas Nixon probated 1838. The estate file names his wife as Millicent, therefore, this is not the Nixon family I am looking for. I am looking for an Elizabeth Nixon. However, I now have some clues of where the Nixon’s might be from and will continue to search the records to see if I can find Elizabeth Nixon. I have a suspicion that wherever Elizabeth is from, Hardy Morgan is from the same place. 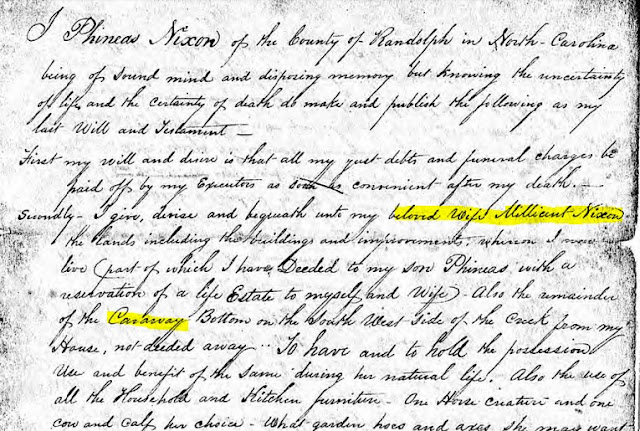 While digging through records in Tennessee, I discovered another couple with roots in Uwharrie who migrated west and is related to Colin Beckerdite. Green Haltom was born 17 May 1810 in Montgomery County, North Carolina and is the son of Charles Haltom and Rhoda Harris. In another mysterious meeting, Green Haltom happens across the sister of Colin Beckerdite, Mary, and in what must have been a double wedding; Green and Mary wed the same time as Colin and Caroline. The first children born from both of these unions, Ezekiel Haltom and Martha Beckerdite, share the same birth year, 1832. 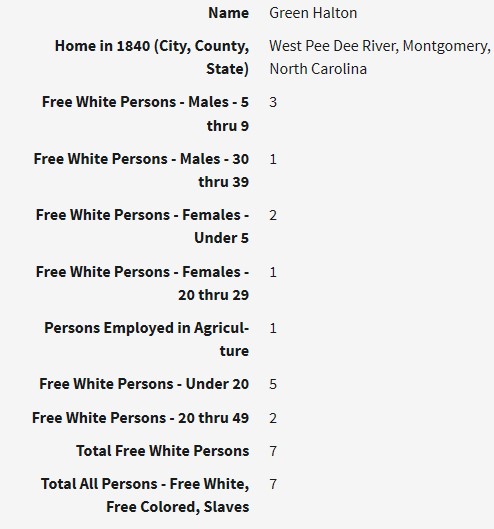 By 1850, in what looks like a mass exodus from Montgomery County, the Russell’s, Haltom’s, Merritt’s, Reynolds’ and Saunders’ were now living in Tennessee. Green and Mary Beckerdite Haltom would remain in Tennessee the remainder of their lives. 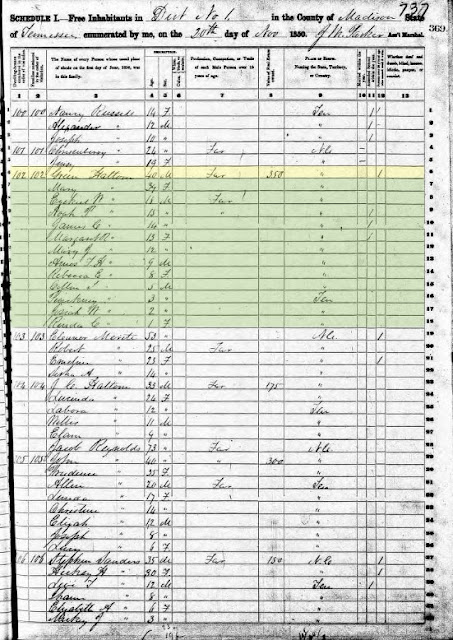 Green died 26 Mar 1879 and Mary, Colin Beckerdite’s sister, would die in 1909. Both are buried at Pleasant Springs Cemetery in Chester County, Tennessee, just some 10 minutes away from Old Montezuma Cemetery where the Stewarts are buried.

Posted by Uwharrie Roots at 8:51 PM