I’ve heard the name “Dutch John” since I was a child. I can remember my grandparents and my father talking about how so-and-so lived over by “Dutch John’s Creek” and I always wondered who he was. I still wonder who Dutch John was. His identity has never been uncovered.

My own 4th great grandfather, Michael Fesperman, was called the little Dutchman because of the language he spoke, and not the area of Europe he was from, by Dr. Francis Kron, a German physician who emigrated to Montgomery County in the 1820s and later moved across the river to what is now Stanly County. I am not sure if Dutch John was Dutch or was one of those German settlers who were called Dutch and became the founders of the Lutheran churches in Cabarrus and Rowan counties. 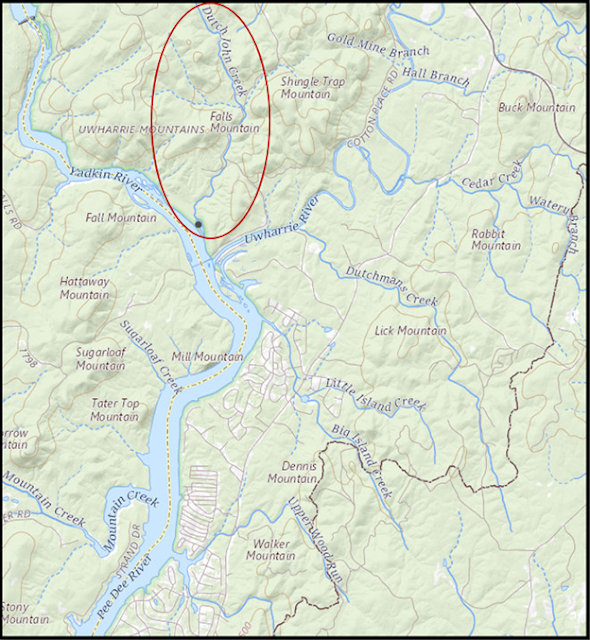 The first mention I can find of Dutch John Creek is land grant # 69 that Moses Curtis entered on 10 Dec 1779, just 11 months after Montgomery County was formed from Anson, in fact, the county was still listed as Anson in the entry book.

“Entry office of Claims for land in the County of Anson to the surveyor of the said county, greeting, you are hereby required to lay off and survey for Moses Curtis a tract or parcel of land containing one hundred acres on the north side of the Yadkin River on the head of Dutch John Creek…”

The 100-acre square shape tract of land was surveyed by Mark Allen 22 Jul 1779. Chain carriers were Russell Curtis, most likely the brother of Moses Curtis and Arthur Harris. No neighbors were listed on the survey. 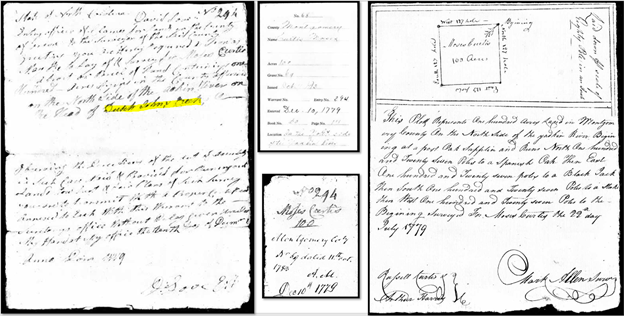 A second land grant, # 156, entered 12 Dec 1780, is found for Moses Curtis, for 50 acres of land in Montgomery County at the great shoals and includes improvements made by Moses Curtis. The survey shows a drawing of the tract of land and shows the great shoals as being at or near the mouth of Dutch John Creek as it flows into the Yadkin River. Again, no neighbors are listed. Chain carriers were Russell Curtis and John Curtis. 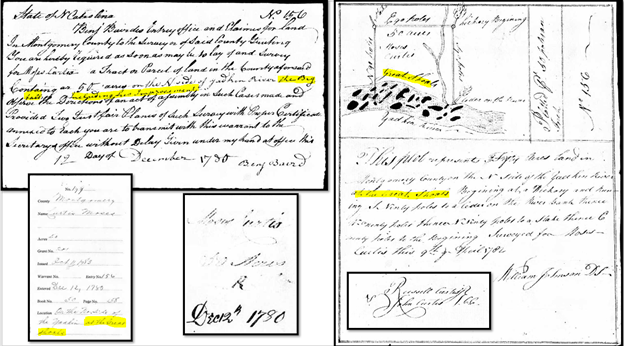 The third and final land survey I can find for Moses Curtis is # 361, entered 11 Jul 1781, for 100 acres of land in Montgomery County on the north side of the Yadkin River lying on both sides of Dutch John Creek. No neighbors are listed. Chain carriers were John Curtis and William Stewart. 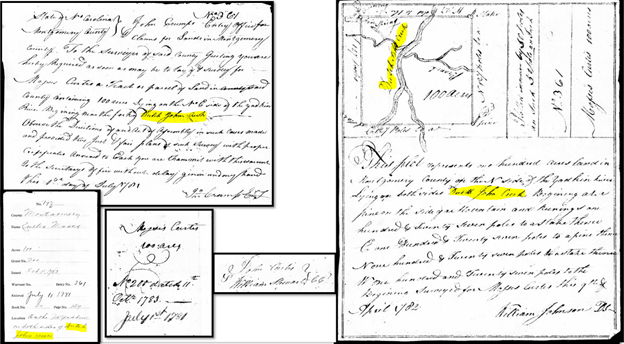 I found Russel Curtis’s Revolutionary War pension file at Fold3. He was living in Trigg County, Kentucky, formed in 1820 from portions of Christian and Caldwell counties. He had a land grant for Christian County in the year 1818, those parts that became Trigg County. Russell Curtis, age 75 years, appeared before the Trigg County Circuit Court in the year 1832 to apply for a pension.

Russell Curtis enlisted as a volunteer in the army of the United States in the year 1779 under James Crump, Captain, Moses Curtis, Lieutenant, in Montgomery County, North Carolina, for 6 months under the orders of Col.William Pickett, which he served faithfully in the said county of Montgomery and Anson and in adjacent counties.

He enlisted the second time in June 1780 under Captain Buckner Kimball and Jesse Harris, Lieutenant and William Williams, Ensign, in Col. Drury Ledbetter's Regiment commanded by Gen. Rutherford and served 3 months. He got his discharge from the Regiment some time in Sept 1780 and sold it to a Major Beard in Salisbury.

This must be Lewis Beard mentioned in the book, “A history of Rowan county, North Carolina : containing sketches of prominent families and distinguished men.” The Beard family were German emigrants to Pennsylvania and then to Rowan County, North Carolina. Lewis Beard's mother was Christine Snapp, daughter of Lawrence Snapp, a German immigrant who owned a plantation on the Yadkin River seven miles from Salisbury. 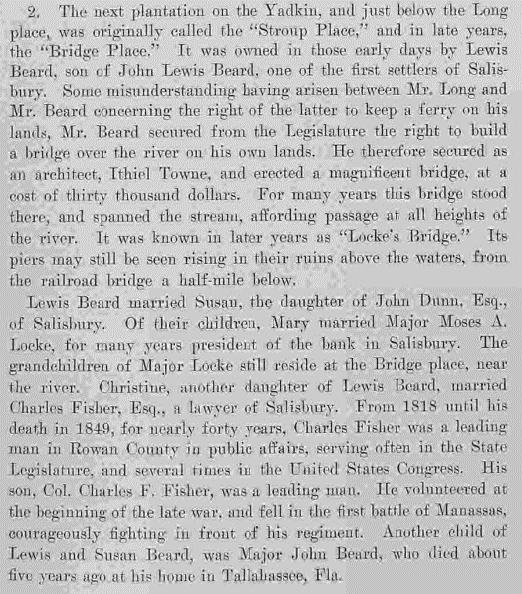 Russell Curtis’s third enlistment was for 3 months under the same Captain Buckner Kimball and Col. Ledbetter and Col. Harris guarding prisoners at the time of Gates defeat in South Carolina. He was in a skirmish with the Tories on Drowning Creek and in another skirmish at the mouth of RockyRiver on Pee Dee River in Montgomery County.

John Mabry, who also has a Revolutionary War pension file, appeared as a witness saying he had been acquainted with Russell Curtis from the year 1774 and that he was returning home (to Warren County, North Carolina) from service in South Carlina in 1783; he came through Montgomery County, North Carolina where said Curtis resided, that he was in the neighborhood for several months where Curtis resided and was informed of his service. John Grasty, the other witness, also has a Revolutionary War pension file.

Russell Curtis was born in the town of Fredericksburg in the state of Virginia on the 6th day of Jan 1757 as he was informed by his parents. He is most likely the brother of Moses Curtis. 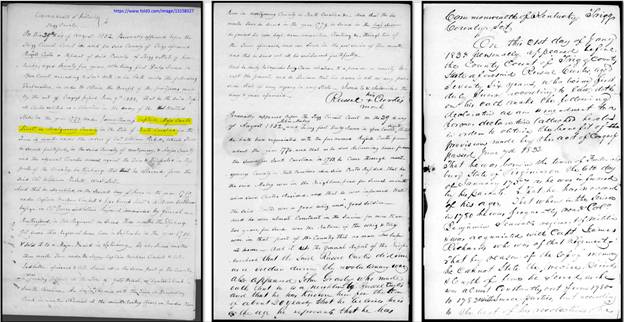 Moses and Russell Curtis can be found on the 1800 Census for Montgomery County, both listed close in age. 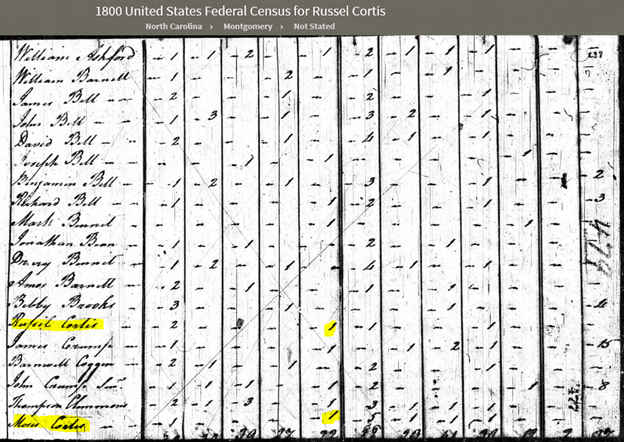 The 1810 Census for Montgomery County, North Carolina looks to show Moses Curtis living on the west side of the river in Captain Kirk’s district among the Huckabee and Kirk families…families that went west to Tennessee. 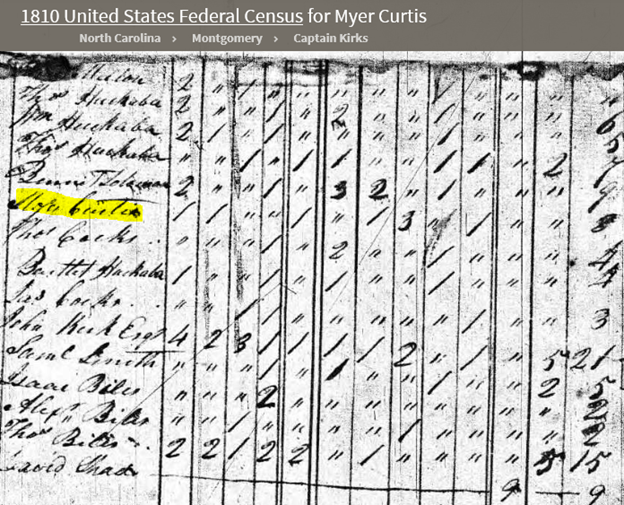 Checking the Tennessee Census data, I found a listing for a Moses Curtis in Jackson County. This man certainly meets the age requirement for Moses Curtis, being over the age of 45 in 1820 but comes a little shy of the age requirement in 1830, being, at most, born about 1760. Knowing that ages on Census data can fluctuate by as much 10 years in either direction, people either not wanting to report their actual age, or truly not knowing or remembering when they were born, I decided to keep digging.

Continuing my search into Revolutionary War pension claims, I found William Boyd who claimed he was born in South Hampton County, Virginia on 11 Aug 1760.

Question 1: Where and in what year were you born? I was born in South Hampton County in the state of Virginia on the eleventh day of August 1760.

William Boyd’s answer to question 3 told me I was on the right track in thinking he knew either Moses or Russell Curtis.

Question 3: Where were you living when called into the service? I was living in Roane (Rowan) County in the state of North Carolina when I entered the service.

Where do you now live? in Washington County in this territory (Arkansas) 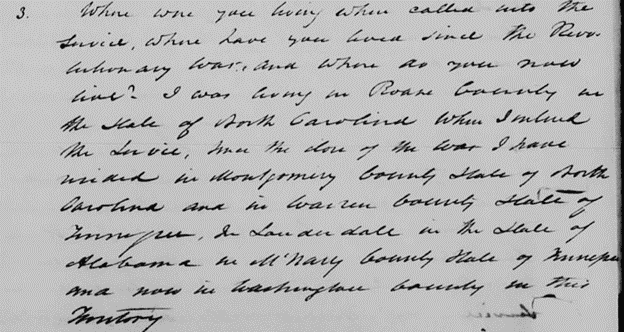 Question 5: State the names of some of the regular officers who were with the troops when you served.

I knew I was getting close because all the names of the officers lived in or near Montgomery County, North Carolina.

William Boyd declared his officers were Col. Drury Ledbetter, Major Charles Jones, Captain James Allen, James Crump had taken command of another company on the east side of the Adkin (Yadkin) River and served under Buckner Kimball. 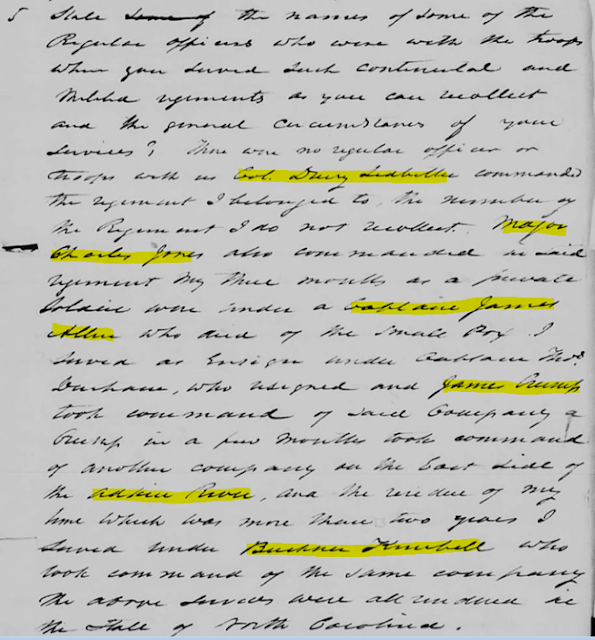 Question 7 asks the claimant to state the names of persons who served with him and belonged to the same company during the time served. And there it was, alongside many names from Montgomery County, North Carolina, Moses Curtis, and Russell Curtis. 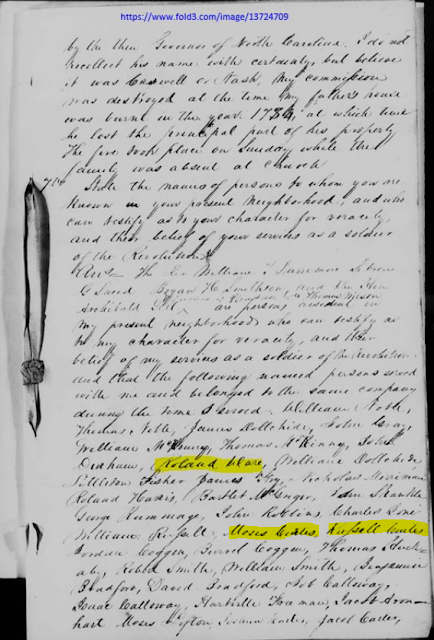 Roland Ware was mentioned. His daughter, Susannah Ware, married Ezekiel McGregor, the son of the hell and brimstone Scottish preacher, William McGregor, who died and is buried in Stanly County (formed from Montgomery). His close neighbors being the Kirks and the Huckabee families I mentioned above in the 1810 Census.

Ezekiel and Susannah Ware McGregor's daughters, Susan and Avie, married into the Huckabee family in Tennessee. Avie first married my 1st cousin 5x removed, Benjamin Marks, who migrated to Tennessee, probably with some of the Kirk or Huckabee families.

DNA testing has shown I am a very close match to a John Marks who, according to Census data was born about 1816 in North Carolina and died in Arkansas about 1870. He married Mary, her maiden name unknown, in Tennessee. John may be the mysteries unknown man found on the 1840 Census with Benjamin Marks in Giles County, Tennessee; and a brother who migrated with him and has been confused with John Marks, my 4th great grandfather, for many years, but DNA testing uncovering a possible link now.

It must be noted that during my search for Moses Curtis who was one of the first inhabitants of Dutch John Creek in Montgomery County, North Carolina, I found there may have been several men by the name of Moses Curtis and researchers have not yet figured them all out. DNA testing may be needed to untangle this web of Moses Curtis men.

Posted by Uwharrie Roots at 11:24 AM No comments: