Etheldred Harris, called Dred, was born about 1749 in Granville (later Bute) County, North Carolina. His father, West Harris, was in Granville County by 1746, three years prior to Dred’s birth. Not much is known about Dred prior to 1770. Based on records of his father, West, it is assumed that he was raised in an upper middle-class family in the British colony of North Carolina, where he was taught to read and write, and, being a British subject, to respect the King of England. A year after he attained his majority, age 21, he witnessed a deed dated 10 Feb 1771 between his parents, West and Mary Harris, and brother, Turner. Her mention in this deed informs us that Mary Harris, Dred’s mother, owned land in Bute County, either by dower or inheritance, and she was alive in 1771.

West Harris, and Mary his wife, of Bute County...province of No. Carolina...to Turner Harris...for 35 pounds current money of Virginia...200 acres of land on the south side of Sandy Creek and on the Waters branch…witness, Moses Harris, Etheldred Harris. 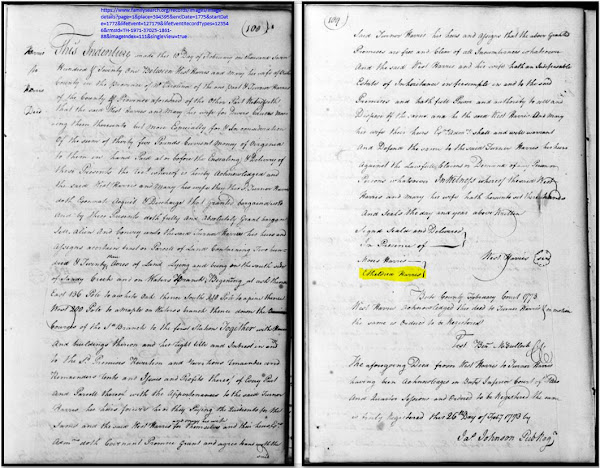 In 1773, Dred’s father, West, deeds to him 342 acres of land in Bute County, formally Granville, and now Warren County, in the province of North Carolina, on Henry Weaver’s Creek, near Lick Branch, for the sum of 70 pounds Virginia money. The deed was witnessed by Nathaniel Harris and Moses Harris. It was a tract of land granted to West Harris by Earl Granville in 1751. 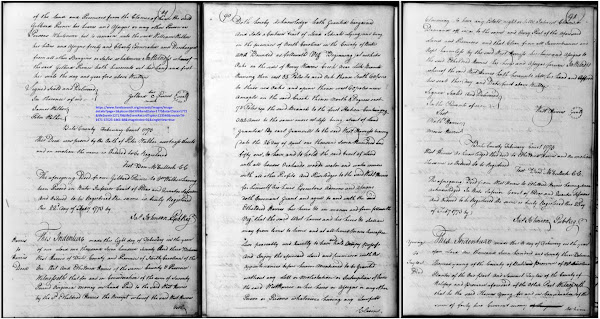 Based on family trees on Ancestry and countless genealogy web pages, Find-A-Grave, and books, it seems to be overwhelming misunderstood that Etheldred, in 1774, married Elizabeth Warren, the daughter of Benjamin Warren, in Brunswick County, Virginia. I obtained a copy of the actual license and parental consent, dated June 27, 1774, from a fellow researcher who obtained the copy of the original in Brunswick County, Virginia many years ago.

In the MARRIAGE RECORDS OF BRUNSWICK COUNTY VIRGINIA 1730-1852 BY AUGUSTA B. FOTHERGILL is found the transcribed record dated the same as the parental consent. In 1774, Elizabeth must have been underage, thus requiring the consent of her father, Benjamin Warren, to marry.

However, I do not think this marriage ever took place. In the same marriage record book, dated 17 May 1778, four years later, Elizabeth Warren, daughter of Benjamin, married a man with the surname Lashley. Since she is listed by her maiden name, Warren, it leads one to believe that the marriage between her and Etheldred Harris never took place, otherwise, she would be listed as Elizabeth Harris, meaning she is a widow and is remarrying, meaning that Etheldred died, and we know Etheldred Harris, son of West Harris, did not die based on future records of him.

I suppose there is the possibility that the Harris / Warren marriage could have been annulled, though that is highly unlikely in Colonial America, and no records have been uncovered that would indicate this is the case, but, if that was the case, she might have legally been able to use her maiden name. It is more likely that Etheldred Harris and Elizabeth Warren never married. Also note the 1778 record calls out that Elizabeth is the daughter of Benjamin. The 1774 record does not call this out, but the parental consent and marriage license would certainly indicate that this is the same Elizabeth Warren.

According to the will of Benjamin Warren, his daughter, Elizabeth, married a man with the surname Lashley. Benjamin Warren’s will is dated 17 May 1778, the exact same date of the marriage license between Elizabeth Warren, daughter of Benjamin, and the man with the surname Lashley. Later records indicate that Elizabeth Warren married a man named Howell Lashley. 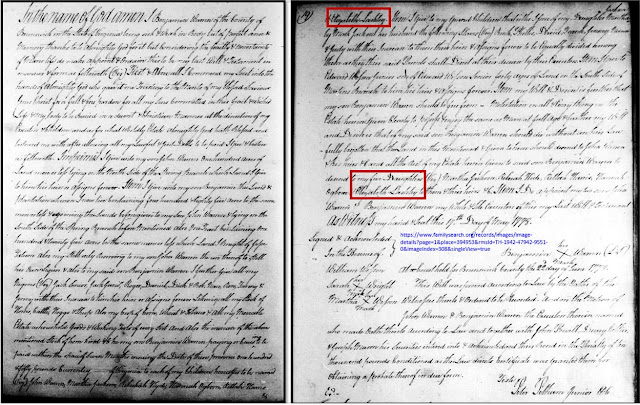 Family tradition of those who claim descent from Etheldred, says that he married a woman named Sarah Chambliss, though there is no proof of this marriage either, and that their children were Littleton, Jarret, Wiley, Hixey and Elizabeth. I would suggest that there is a missing child here because the 1800 Census supports that Etheldred had 4 sons and 2 daughters. 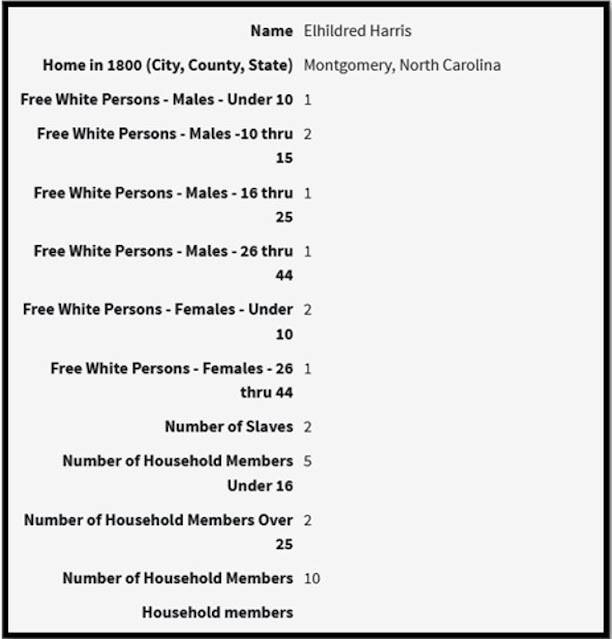 In the War of 1812 widows pension file for Nancy Hancock Harris, the wife of Wiley Harris, is found some confusion over Wiley Harris and Willis Harris, whether they are the same person. Gray W. Harris from Davidson County, North Carolina, clears up the confusion in a letter dated 22 Jan 1879.

“Yours of the 10th Ist to hand and in reply (the one Willis Harris referred to in your letter was a brother of Wiley Harris, he lived in Wilson County and state of Tenn.”

This tells me that if Wiley Harris was the son of Etheldred, Willis Harris was a well. 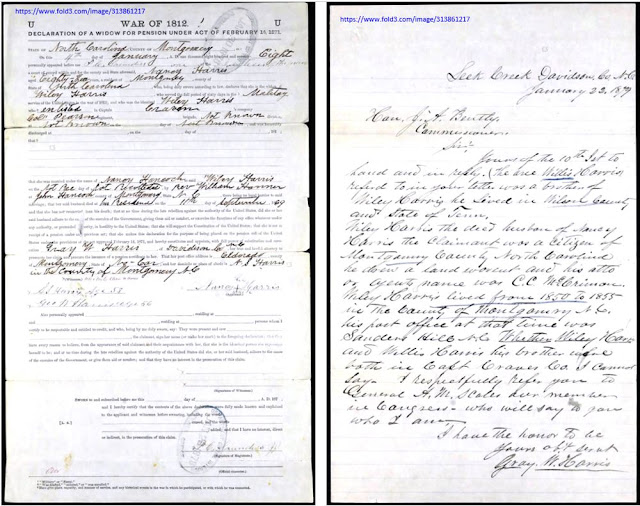 So, it appears that Dred lived out his life as a bachelor in Bute (later Warren) County until about Apr 1777. It is then two years into the Revolutionary War and Dred has made the move to Anson County where his father, West, and other family members, now reside.

On 7 Apr, “in the first year of the Independence,” 1777, the Declaration of Independence being unanimously adopted by the Second Continental Congress on 4 Jul 1776 announcing the thirteen colonies' separation from Great Britain, just nine months prior, Dred bought 150 acres of land, on the Northeast side of the Great Pee Dee River, lying on Island Creek, from Henry Mounger, who had bought the land from Thomas Wilson, who had acquired the land via a land grant. West Harris was a witness to the deed and proved the deed in open court. I have not yet found a deed in Bute or Warren County where Dred sold the 342 acres of land he bought from his father. 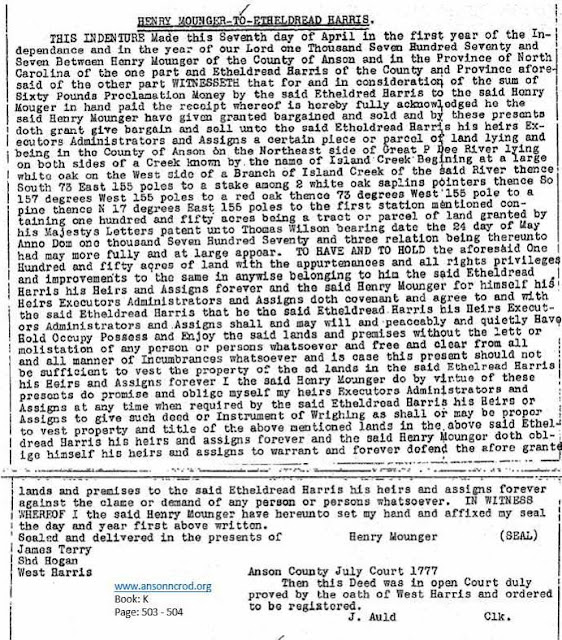 On 8 Jul 1777, just a few short months later, Dred, who is listed as a planter (farmer), purchases from Sias (Silas) Billingsly of the county of Anson for 40 pounds Proclamation money, 100 acres of land on the northeast or lower side of Uharrey River lying on both sides of the Dutchman’s Mill Creek and adjoining Walter Ashmans (Ashmore). This land was originally granted to Sias Billingsly in 1773. West Harris signed as witness and proved the deed in open court. 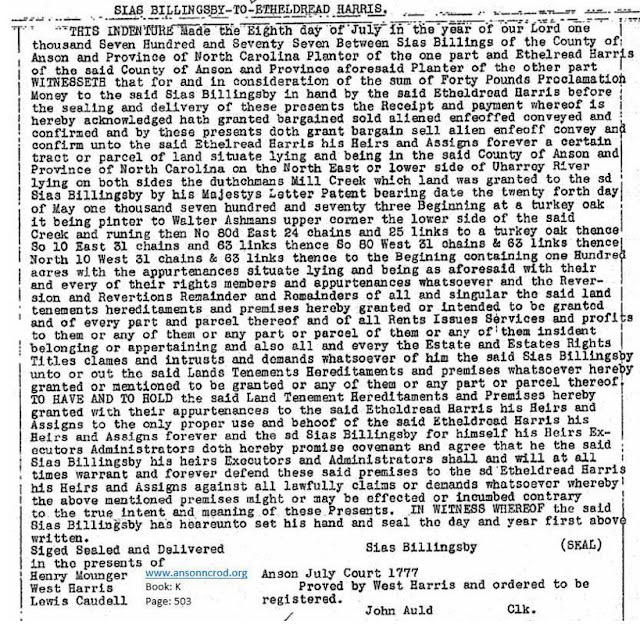 Etheldred’s name appears on a petition to the Senate from the “inhabitants of the Upper End of the County of Anson” asking that the county be divided since the county has “grown populous.” Montgomery County then being formed from part of Anson County in January 1779. 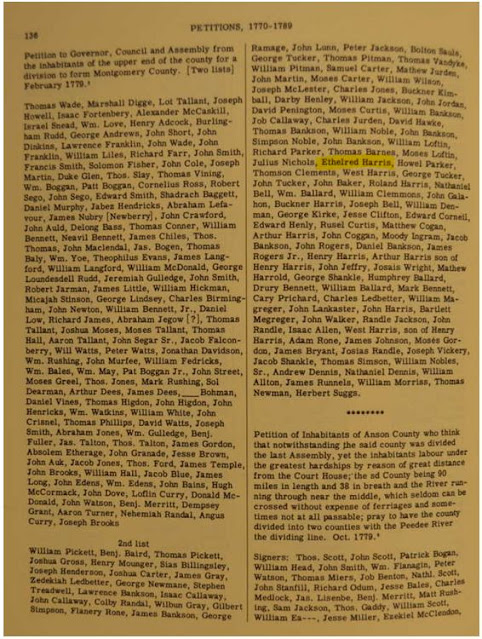 With the Revolution now in full swing, about 1780, Dred joins his brother West Jr, who had entered the service in 1776. I discovered from the pension application of Joshua Hurley of Montgomery County, that Dred marched to Wilmington with him around the Fall of 1781 and about the time of Cornwallis’s surrender at Yorktown.

Joshua Hurley’s pension application states: “to the Court of Pleas and Quarter Sessions for the County aforesaid in the town of Lawrenceville, April 16, 1834." Part of that application reads: "and the said Joshua Hurley doth also further continue his declaration for one other tour of three months service in the Revolution, a drafted militiaman under Captain Etheldred Harris, Major West Harris and Col. William Loftin, all of whom marched together with the said Joshua Hurley to Wilmington, North Carolina...that he served this three months tour punctually and believes that he entered the service and served this tour about the time Cornwallis surrendered at Little York, and the reason that he, the said Joshua Hurley, thinks so is that he was marched from Montgomery, North Carolina by way of Drowning Creek, Rockfish, Waddle’s Ferry on the Cape Fear River, Black River and to the Long Bridges across the Northeast River near the said Wilmington, where he remained until the British had left said town and when done, we marched then into the town of said Wilmington and received his discharge and returned home." 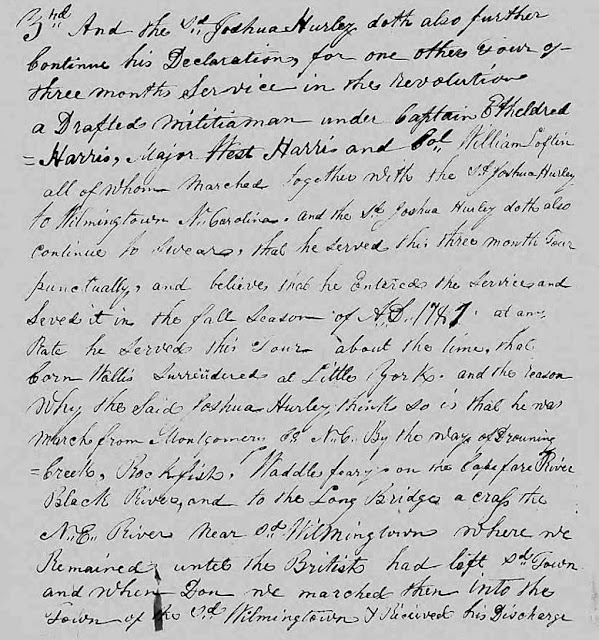 Thomas Landrum’s pension file provides additional information saying, “Again while living in said county and state [Montgomery County, North Carolina] in the latter end of July or the first of August 1781 he was drafted for a three-month tour against the British under Capt. West Harris in Maj Dred Harris' and Col Wm Loftin's Regiment of Militia. We rendezvoused at Charles Robinson's on Little River in said county, lay there a few days then marched to Cross Creek, thence to Elizabethtown, then to Clayton's bridge on Cape Fear River. We made that our headquarters till the British left Wilmington we then got word that Cornwallis was taken. We were then honorably discharged in the last of October 1781...his discharge was signed by the said Capt. Harris but it is lost long since.” 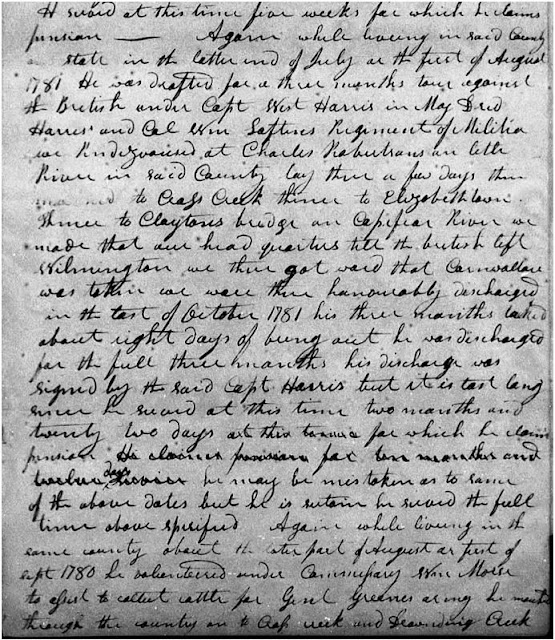 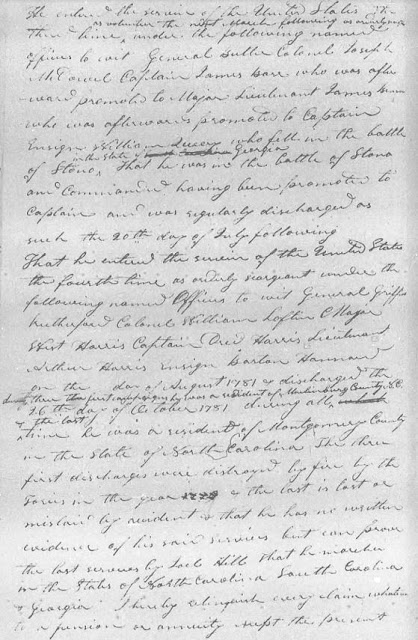 On 6 Sep 1782, Salisbury District, North Carolina, Dred was paid for a claim filed and allowed 30 pounds 2 shillings. I have not been able to find that claim, it may be lost to history.

Again, in 1782, Dred, along with his brother, West Jr, witnessed the will of James Allen in Montgomery County, North Carolina. 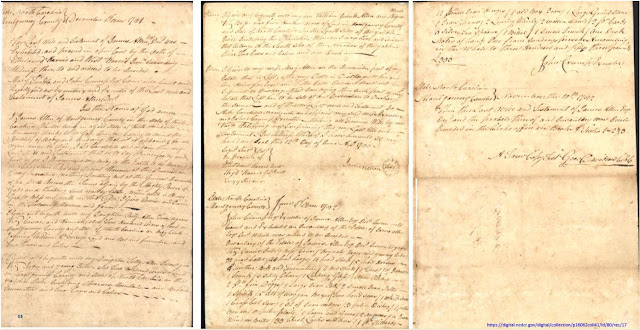 At the close of the Revolutionary War, Dred settled down in the new country of America that, through his military service, had helped to create. He is found on the 1790 Census, the first Census of the newly formed America, and for Montgomery County, North Carolina, with 3 white males, all under the age of 16, and one white female. It looks like Dred finally did marry. His 3 sons were all born after 1774. 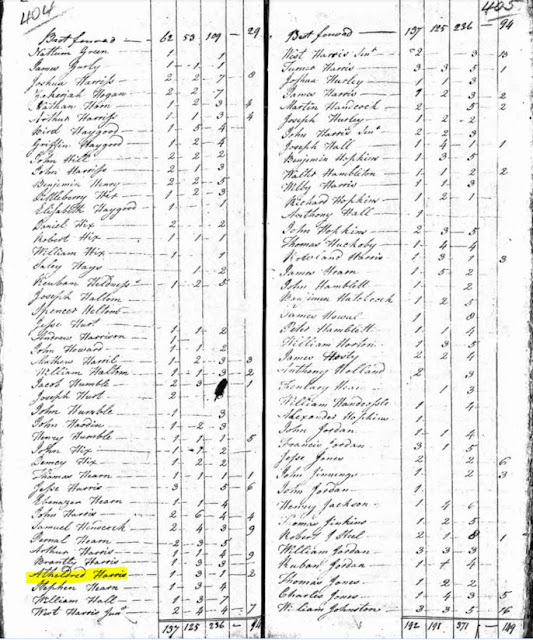 In 1788, Dred enters a grant for 100 acres of land in Montgomery County, on McLaine’s (McLean’s) Creek, including, John Morris improvements, on his own line…runs to the road [probably current day Hwy 109]. I have not been able to find any reference as to what might have happened to the land he purchased on Island Creek, belonging to Henry Mounger, and Dutchman Mill Creek, belonging to Sias Billingsly, in 1777. It seems obvious from later records, mentioned below, that Dred moved his residence from the area near Island Creek, and the town of Henderson, to McLean’s Creek near what is today Center United Methodist Church. 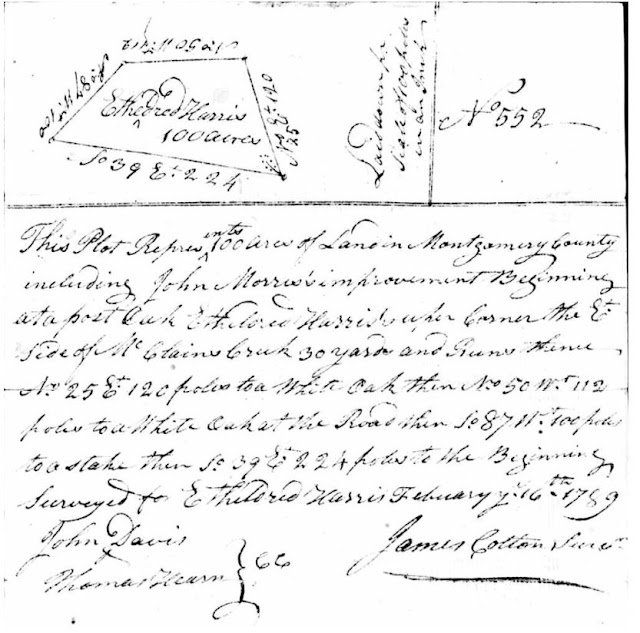 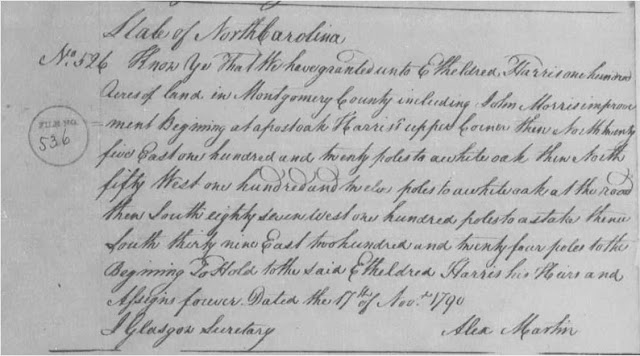 In 1792, Dred enters a grant for 50 acres of land in Montgomery County, on the east side of McLaine’s (McLean’s) Creek, joining Purnal Hearne’s line. 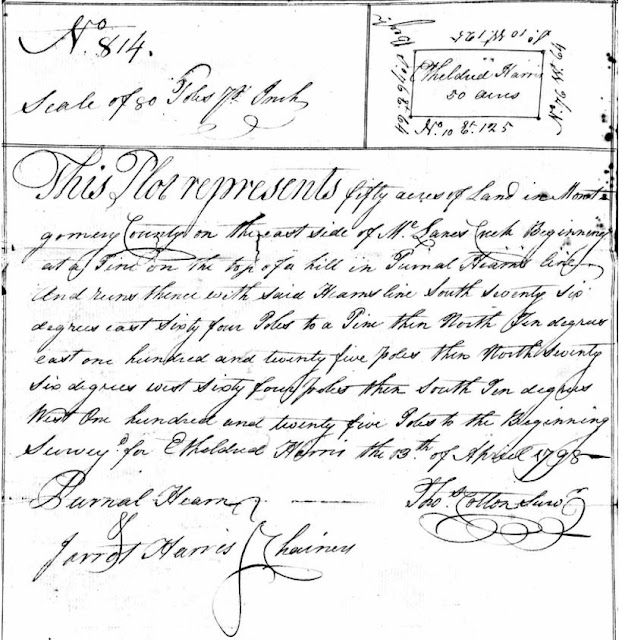 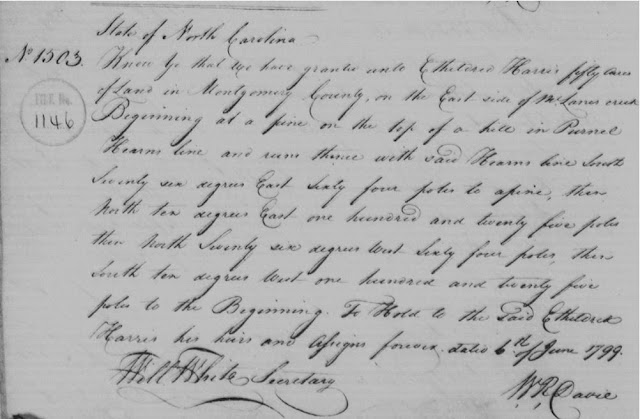 In 1795, Dred resigns his commission as 2nd Major Montgomery County. Obviously, he continued his military career that began about 1780 during the Revolutionary War, spending some 15 years in service. Dred was 46 years old.

To the Honorable the General Assembly now sitting: Gentlemen, please do except of this my resignation as second Major of Montgomery County. January 8, 1795 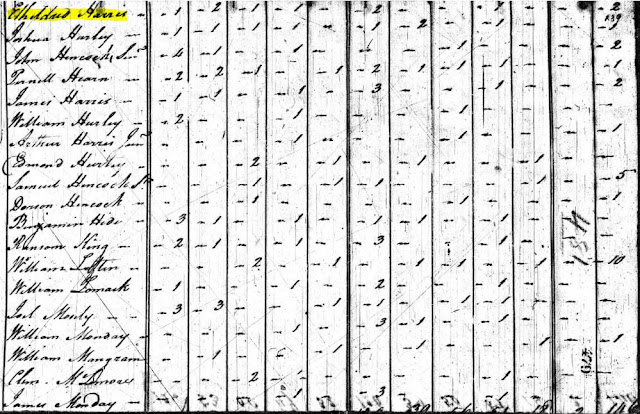 In 1804, Etheldred sat down to breakfast with Francis Asbury who “was one of the first two bishops of the Methodist Episcopal Church in the United States. During his 45 years in the colonies and the newly independent United States, he devoted his life to ministry, traveling on horseback and by carriage thousands of miles to those living on the frontier.” (Wikipedia) 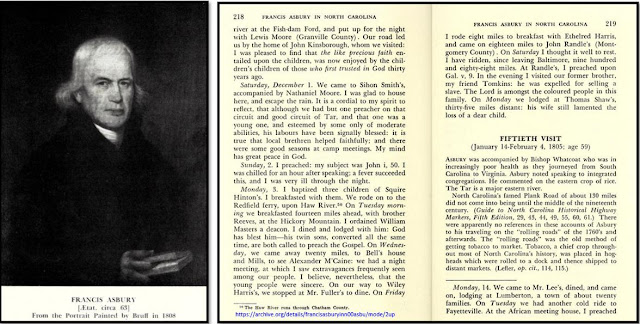 In 1806, Arthur Harris, the brother of Etheldred, deeded 2 acres of land to erect a place of worship for the Methodist faith. It is believed that the deed is for Center United Methodist Church located between Hwy 109 and Coggins Mine Road in the Eldorado area of Montgomery County. The below copy was provided to me by a fellow researcher who obtained it from the Coggins family.

The deed in part states: 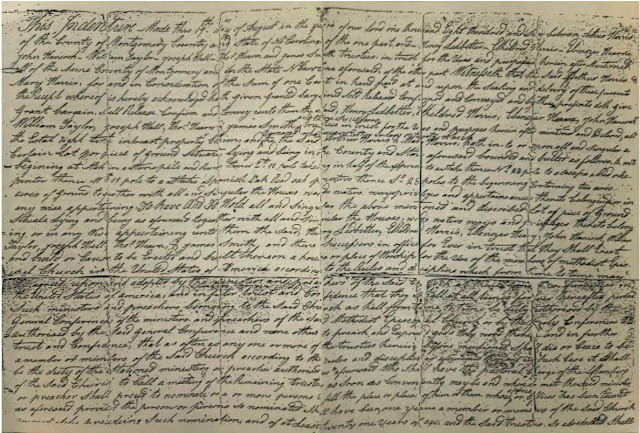 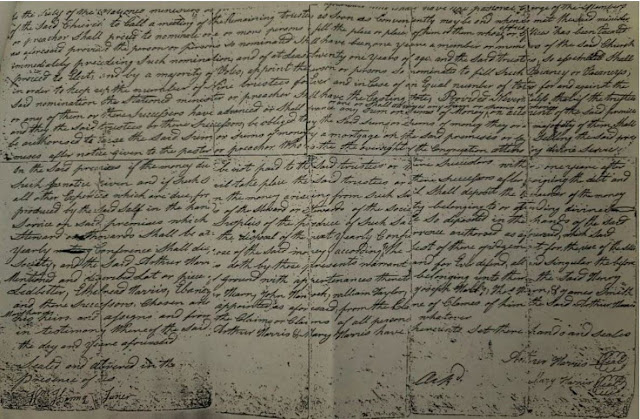 Etheldred Harris died, most likely in Montgomery County, North Carolina, between 7 Mar 1820 when Littleton Harris entered a land grant for 75 acres of land and 4 Mar 1821 when the survey for the land was completed.

To the surveyor of said county Greeting, you are hereby required to lay off and survey according to law a tract or parcel of land containing seventy-five acres for Littleton Harris. Entered the seventh day of March 1820 adjoining William Harris lines & Etheldred Harris Decs’d… 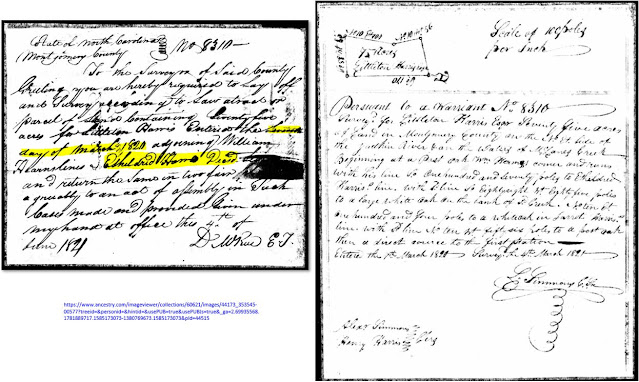 Posted by Uwharrie Roots at 2:06 PM