The 1880 Census for Uwharrie, Montgomery County, North Carolina, names my great grandfather as U. S. Grant Morris, and no doubt was named for the 18th President of the United States, Ulysses S. Grant, who was an army commander during the later years of the American Civil War and was sitting President when U. S. Grant Morris was born in May 1869.

His name not to his liking, my great grandfather, U. S. Grant Morris, prior to 1891, changed his name and became known to his descendants as John Coon Morris.

John married first, Ella Wade, on 2 Feb 1891. She is the daughter of William Horatio 'Rassie' Wade and Mary Ann Liles. To this union were born two children, Lonnie, 1892; he died unmarried (as far as I know) at the age of 31 and is buried in Montgomery County. The second child born, in 1894, to John and Ella Wade Morris was Gertrude; she married William Thomas in Mar 1918. Gertrude died in 1936 and is buried in Richmond County. 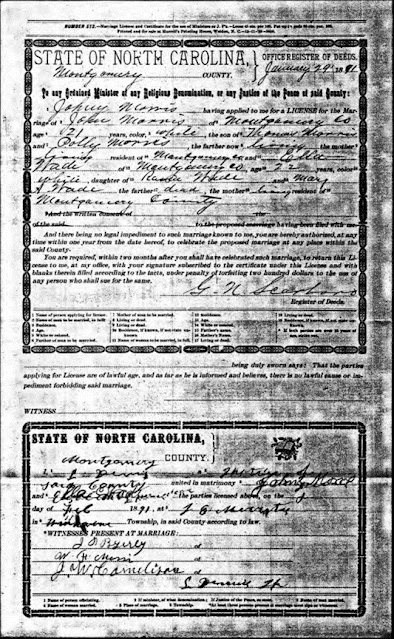 Because I have seen several comments on Ancestry regarding the parentage and the race of Gertrude and who she lived with and why, I will address that here as there really is a simple explanation. Most people tend to only read transcribed documents, let’s face it, they are easier to read, rather than reading the original record which sometimes can be hard on the eyes and even harder on the brain to figure out. The problem though, is that the transcriber normally does not have any relationship to the person in the record nor do they have any of the intricate details of that specific family. They are simply spelling out a word as best they can interpret it and not making comparisons to other documents.

Now-a-days, computer programs transcribe records, and, while this technology is getting better, there is still a long way to go, and it will never replace reading and translating the actual document for yourself. I cannot stress enough to always read and translate the original record yourself whenever possible. Sometimes the original record can contain errors, as is the case with Gertrude, but it is far easier to find an error, and correct it, on the original record, than having to find and correct multiple errors that were made on multiple transcribed copies.

The Census taker in 1900 listed Gertrude Morris, age 5, as the niece of Mary Wade, age 66. This is in error as Mary Wade is her grandmother, the mother of Ella Wade Morris, Gertrude’s mother. It’s all in those little intricate details that are only known to the family or to a researcher who is willing to dig deep into the lives of a family and ask the right questions and make comparisons between multiple documents. Like a puzzle, the pieces are there, but you must put them together in the best way that makes the most sense. Also, realize that the Census taker probably did not know the family either, so, sometimes, mistakes were made on the Census record.

Fast forward to 1910 and we find Gertrude living with her uncle James and aunt Catherine (Wade) Maynor. Next door is her grandmother, Mary Wade, age 72, living with her sister, Jane Liles, age 60.

The transcribed 1910 Census lists Gertrude as Mulatto. This is a transcription error by Ancestry. If you open and look at the actual record, her race is listed as 'W" for white. All other records that I found for her also list her as white. I have added a correction to the Ancestry record, so it now shows the race listed as White for Gertrude. 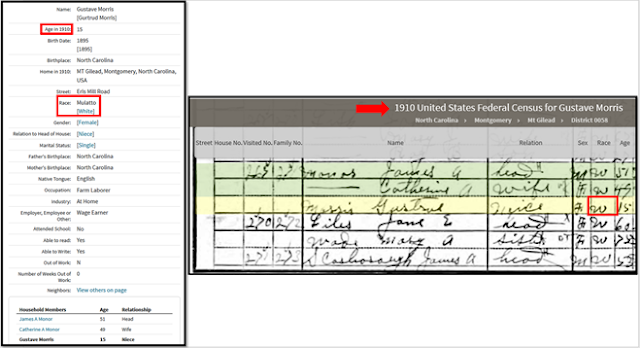 What is interesting here is that John Coon Morris has not remarried, which is a bit unusual. Remarriage was a very common thing to do if a man found himself with two small children to raise after his wife’s death. It was not at all unusual for a man to marry a close relative of his deceased wife who would take on raising the children. But, in this case, we find that John Coon Morris remained a widower. It would be another year, in 1901, when John would marry again to Flora Dennis.

My takeaway from the 1900 Census tells me that each grandmother took over the rearing of John Coon and Ella Wade Morris’ children after Ella died and either John rejected the idea of remarriage or there was no woman that would have him. Polly Morris took Lonnie and Mary Wade took Gertrude. By the time John remarried, Gertrude would have already been living with her grandmother for more than a year and being settled, safe, and thriving, why would she be removed from that home? I imagine that Mary Wade was attached to Gertrude as well and did not want to give her up. So, Gertrude remained with her grandmother and was raised with her mother’s side of the family and her brother, Lonnie, was raised with John Coon’s side of the family. So, an estrangement between the two families had probably begun.

Also remember that the Census shows just one day in every 10 years where a person was at that given time. We have no idea where Gertrude lived on any of the other 3,649 days that cover the span of 10 years. We do know that it must have been common knowledge to her and the family that her parents were John Coon Morris and Ella Wade as they are listed on her marriage license. What is interesting is that her father, John, is listed as dead, which is not the case as John Coon Morris did not die until 1945. No parents are listed on her death certificate, so perhaps over the years, there was an estrangement between father and daughter. If there are questions as to Gertrude's parentage or her race, DNA testing of descendants of Gertrude may help sort this out.

On 11 Aug 1901, John Coon Morris married a second time to Flora Dennis, the youngest child and daughter of Willis Martin Dennis, son of James and Mary Morgan Dennis, and Susannah Hearne, daughter of Stephen and Priscilla Morgan Hearne. John was 31 years old, and Flora was 16. Flora had lost her mother in 1895, when she was but 9 years old. So, Flora and Gertrude had something in common as Gertrude had lost her mother at the tender age of 5. 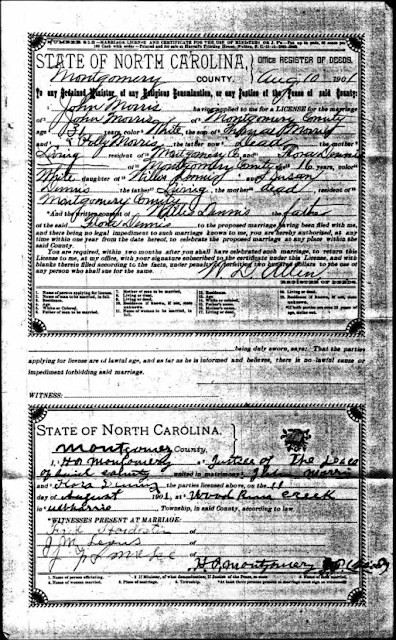 John Coon and Flora Dennis Morris were the parents of 11 children.

On the 1910 Census is found Lonnie Morris, listed as a boarder, but he is the son from John Coon’s first marriage to Ella Wade. Pearl, Arthur, and Willis are the children of Flora Dennis Morris. An infant male child died in 1917. The 1920 Census shows John and Flora with children Pearl, Arthur, Willis, Bertha, Pauline (Lilly), Mary, and Lonnie, who died in Jan 1923. In 1930, found in the home are John Louis, Mary Francis, Mabel, Lilli bell, and Lois. 1940, the last Census available, shows John and Flora and Lois, all the other children having married and moved on.

Whenever I get a chance to write about my Morgan ancestors, I take it! This is a perfect opportunity to write about them because Flora Dennis Morris has a double Morgan line. Her maternal grandmother was Priscilla Morgan Hearne, the daughter of Joseph and Susannah Smart Morgan, and her paternal grandmother was Mary Morgan Dennis, who may be the daughter of Zachariah Morgan and an unknown wife. Both Morgan ladies descend from a Charles Morgan (I) who died in Chatham County, North Carolina in 1787.

Charles (II) and Zachariah’s father, Charles (I), died in Chatham County in 1787. There was a third Charles (III), the son of Charles (II), who was catapulted into the spotlight in Montgomery County in the mid-1830s when his son, Willis Morgan, married the widow of Henry Delamothe, Bethany Bailey Delamothe Morgan and his other son, Henry Morgan, married the widow of Col. John Crump, Letitia Lindsay Crump and ended up embroiled in a court battle with her brother, R. D. Lindsay, to annul that marriage. 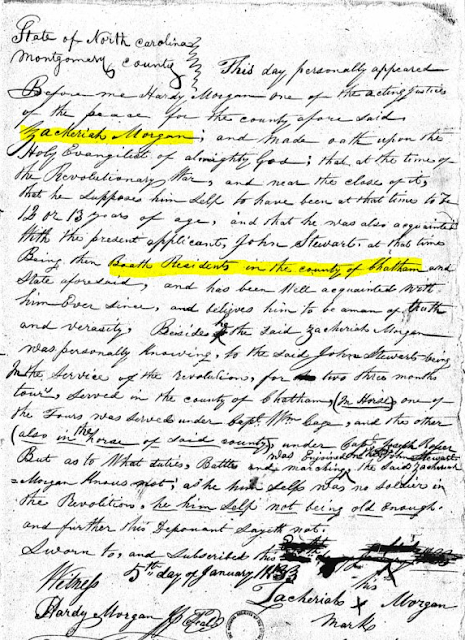 According to an old Newspaper article dated 1813, Zachariah Morgan lived on the road leading from Fisher’s Ferry to Fayetteville and joining the land of Andrew Dennis, who is the father of James Dennis who married Mary Morgan. This area today is on Cedar Creek, current day River Road area in Uwharrie Township, Montgomery County. In 1813, 100 acres of Zachariah Morgan’s land sold for taxes due for years 1809, 1810, 1811 and 1812. 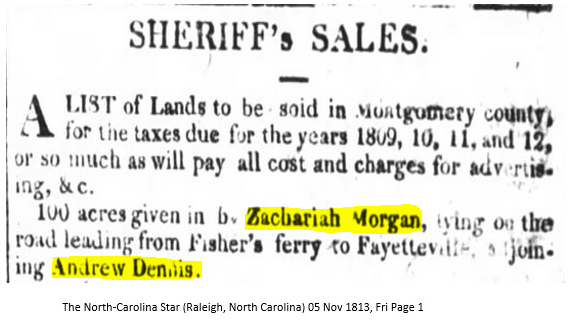 In 1825, James Dennis, the husband of Mary Morgan Dennis, and Spencer Morgan, served as chain carriers on a 300-acre land survey for Zachariah Morgan. James and Mary certainly knew each because they lived next door to one another. They married around 1820. It would not be a stretch of the imagination to think that James Dennis married Mary Morgan, the girl who lived next door.

Spencer Morgan is thought to be the son of Charles Morgan II, but it would not surprise me to learn he is the son of Zachariah Morgan. 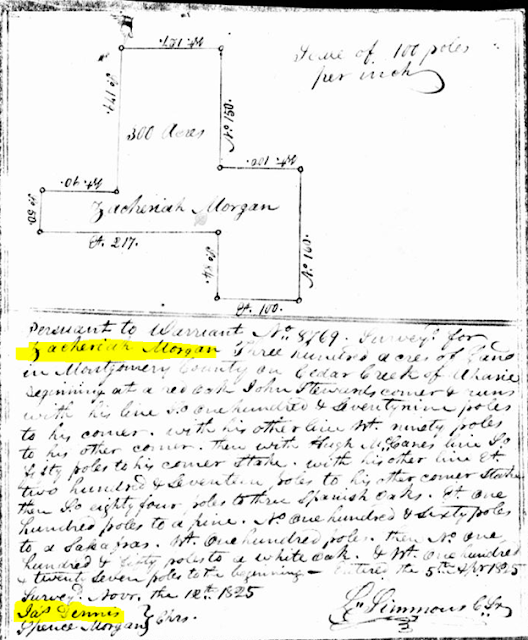 It is on John Coon Morris’ death certificate that is found his parent’s names and places of birth. John’s father is Thomas (Tom) Morris, born in Clarksville, Virginia and his mother, Mary (Polly) Williams born in Montgomery County, North Carolina. 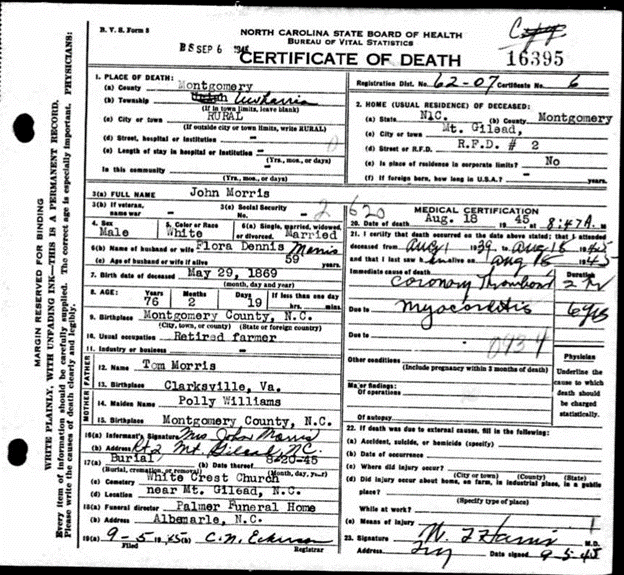 Clarksville is a town located in Mecklenburg County, Virginia along the Roanoke River. It was the first incorporated town in the county of Mecklenburg. In 1818, the town was named after its founder, Clark Royster.

The Roanoke Navigation Company was chartered in 1812 and began construction in 1817 to build the Roanoke (sometimes referred to as the Weldon) canal around a nine-mile, 85-foot drop at Great Falls on the Roanoke River. The work was completed in 1823.  This canal opened boat traffic from the valleys of the Dan and Staunton to the North Carolina coast. (https://www.historync.org/canals.htm)

Tom Morris was born about 1824. I have scoured the 1820 Census for Mecklenburg County, Virginia and found only three Morris families listed.

Jane Morris: the wife of Jesse Morris Senior (d. About 1807)

Daniel Morris: a son of Jesse and Jane 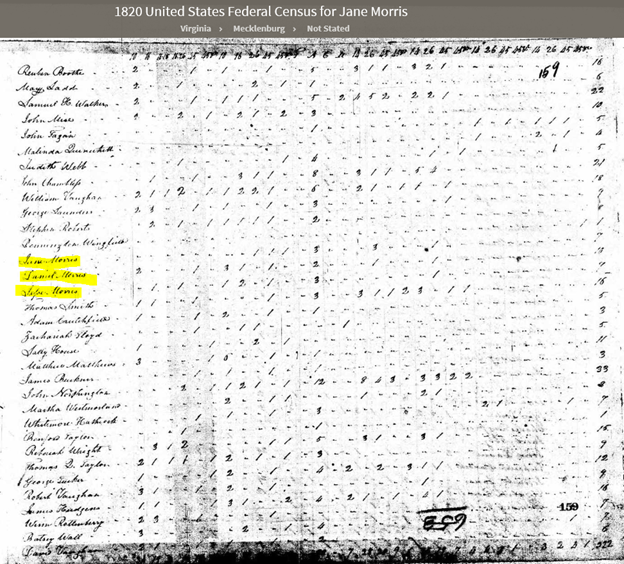 I still have a lot more work to do on tree building for Morris and Drumwright families, but I think I may have found my Morris family – now, I only need to figure out how (or if) Tom Morris and his father, John Jacky Morris, connects to them.

I have several DNA research trees going and after nearly a year of research, I may be able to connect Mecklenburg, VA family to the Granville County, NC family. But the most interesting connection I have found is that of Samuel Coleman Morris (1720-1826) who married Susannah Wade (1750-1828). Is it possible that Susannah Wade somehow connects to Ella Wade, the first wife of John Coon Morris? Did my Morris family know the Wade family from Virginia? Or was John Coon and Ella’s meeting purely coincidental? So many discoveries to be made!

Posted by Uwharrie Roots at 4:21 PM