My research has come to a halt, mostly because I am unable to locate the documents that I need to bring some research together and partly due to the nice weather that beckons one outside rather than sitting at a computer reading through old wills and estate files, and my hectic work schedule that is not conducive to research. I am still trudging along though, reading through old documents when I can. 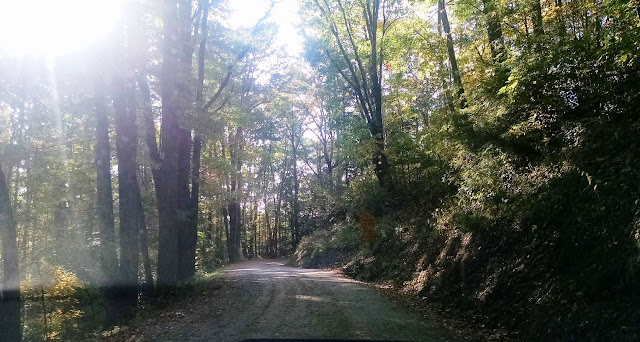 Following are the research projects I am currently working on and hope to be able to put into the Blog at some future date.

John Jacky Morris, my third great grandfather and his wife, Amelia, are still elusive. I have been working through DNA matches but still have not been able to come to any conclusions. Y-DNA matches show connections to Morris families in Tennessee, Alabama, and Granville, North Carolina. I have been building out trees for DNA matches to learn more about each family line. It is a slow and tedious task. I did uncover the first document that notes John Morris by his nickname, Jacky. 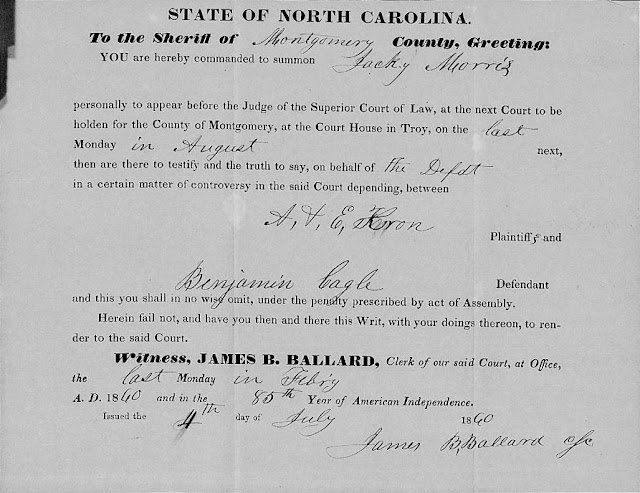 William Marks and Temperance Wright also have offered no more clues to their origins or if there is a connection to the Marks families of Virginia. William Marks is probably the son or grandson of John Marks and Hannah Eidson from Richmond County, Virginia, but the documentation is ever elusive.  A DNA match who claims descent from John Marks and Hannah Eidson through Edward Marks (c1751-1788), married Lucy Bailey, is quite confusing as Edwards Marks is not noted in the will of John Marks. I have been trying to document a connection between Edward Marks and John Marks or between Edward Marks and William Marks of Warren County, North Carolina, but have not been able to. I am also looking at other ways we may connect, perhaps through another family line.
A second to third cousin DNA match to a Wilkerson family who claims descent from Revolutionary War patriot William Wilkerson, Jr. has caught my attention. After exchanging twenty-four email messages with this match on our personal genealogy, we learned that there may a Williams connection. I looked up William Wilkerson's military file on Fold3 and found a mistake. In the file it is noted that he lived in "Rowan County, North Carolina at the great fishery at the Narrows of the Yadkin River" about 10 or 15 years after the Revolution - that puts him there between 1793 - 1798. The Narrows of the Yadkin are in Montgomery (NOT Rowan) County, North Carolina. In common matches certainly show a strong Morris / Williams connection and I suspect that John Jacky Morris’s wife, Amelia, whose maiden name I do not know, may be somehow linked with this Wilkerson family. There is also the possibility that Eula Carter Marks, my great grandmother, whose family lived in Stanly County, may be linked to this family. I am currently researching Jonathan Wilkerson who died in Stanly County, in 1849. Eula Carter Marks’ father is currently unknown, so, this may be a clue to her paternal origins. 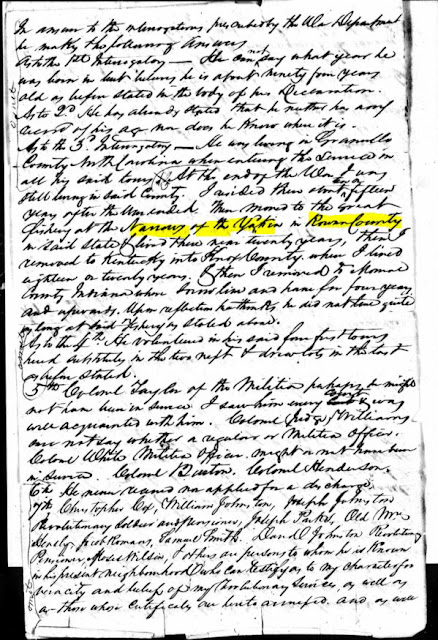 I learned the Walker family of Montgomery County probably hopped across the river, from what is now Stanly, to Montgomery around 1795. According to Land Records for Montgomery County, John Walker, the heir of Robert Walker, as is mentioned in a land survey, was granted land on the North East side of the Pee Dee River on Cedar Creek joining Joseph Bell and Benjamin Bell's lines. Benjamin Bell was a chain carrier on the survey. Prior to this grant, the Walker's lived on Long Creek on the Stanly County side of the River, near the Rowan County line.

Another grant states that Richard Walker of Old Anson was granted land in what is now Montgomery on Mill Creek, joining Richard Bell and included Nathaniel Dennis's Improvements. Denton Smart and Matthew Smart were chain carriers on that survey. I’ve been reading through Anson County records trying to find information on the Walker family.

A fellow genealogist pointed out to me that John Walker was noted as 78 years of age on the Montgomery County 1850 census and was living with Catherine Hicks, the widow of Joshua Hicks. Also listed in this household are children with the surname Bell. I learned these children are Catharine's grandchildren through her daughter Rachel who married Henry Bell, son of Benjamin Bell. The grant certainly explains how Catherine's daughter, Rachel, ended up married to Henry Bell, the son of Benjamin Bell, they lived next door to one another.

mtDNA matches are proving to be more confusing than helpful. I carry the mtDNA of Elizabeth, maiden name unknown. She married Stephen Walker who may somehow be connected to Catherine Hicks whose maiden name is most likely Walker. My great grandmother, Barbara Lefler, descends from a Walker line. Her mother was Sarah Walker, married Daniel Lefler.

I have 83 mtDNA matches and less than half of them have family trees. For those that do have a family tree, I have been working through the trees trying to learn more about their origins. It is quite interesting to note that those matches with a genetic distance of 2 and 3 look to be from Scotland, Norway, Hungary, and Poland. Those with a genetic distance of 1 have ties closer to home with connections in Canada or the northern United States. Those matches with a genetic distance of 0 have connections to South Carolina, Tennessee, Georgia, Alabama, and Virginia. At least one match has family ties back to a Bullock and Wilkerson family from Granville County, North Carolina. The latest match, received just yesterday, has connections to Burke, North Carolina through a Berry/Rector family with ties to a Loving family. So, you can almost see the migration path that these families took from Europe to the New World of America. However, that gets me no where closer to finding out the maiden name of Elizabeth or where she is from. So, the hunt continues.

Perhaps the most exciting find over the past few months is a Marks DNA match on Ancestry that has compelled me to rethink if my fourth great uncle, James Marks, had a child I was not aware of. In my Blog about Benjamin Marks, I made mention that he is found on the 1840 Census in Giles County, Tennessee with another male in his household about the same age as him. DNA has now provided a clue that may offer some answers, or at least generate some theories, on who this unknown male living with Benjamin Marks in Giles County, Tennessee is.

I have multiple DNA matches back to John Marks born about 1816 in North Carolina. John married a lady named Mary who was born about 1826 in Tennessee. John and Mary had at least 7 children, Margaret, Avie, Samuel, Martha, Joseph Clayton, John, and Sarah. My DNA matches descend from Samuel Marks and Joseph Clayton Marks. Most researchers show John Marks, born 1816, North Carolina, connected to John Neal Marks and Mary C. Brown. However, after researching John Neal Marks I found that he was born in 1810 in Virginia and was residing in Missouri in 1860 vs. John Marks (born 1816 NC) found in Arkansas in 1860. So, these are two different men.

What I found most interesting is that John and Mary Marks named a daughter Avie. Benjamin Marks married a woman named Avie McGregor.

Is it possible that John and Mary named a daughter after Benjamin’s wife?

The 1810, 1820, and 1830 Census shows that there is an unknown male child of James and Caty Gunter Marks and DNA has uncovered a possible relationship here.

Is it possible that the John Marks who is found in Daniel Freeman's Store ledger is really the brother of Benjamin and not John Marks, my fourth great grandfather? 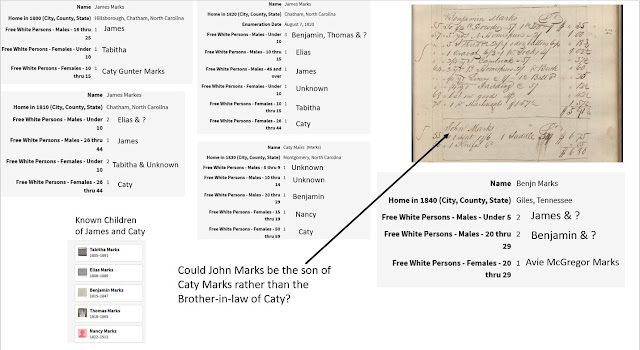 Posted by Uwharrie Roots at 4:14 PM