The Battle of Alamance

William Tryon served as the eighth governor of North Carolina from 1765 – 1771. Tryon began his professional life in England in military service to the crown. He earned a commission of lieutenant in the First Regiment of Foot Guards in 1751 and had risen to lieutenant colonel by 1758. In 1764, he was offered the governorship of North Carolina. He sold his home and possessions in England and departed for the colony of North Carolina, only to learn upon arriving, that the office he was to command was still vacated by the current governor, Arthur Dobbs. Tryon and his family remained in Wilmington awaiting Dobb’s departure or death, which came in Mar 1765. Tryon was commissioned governor, and promptly, chaos ensued. His first duty was to quell the turmoil that followed the passage of the stamp act. In 1766, after multiple riots, Tryon announced the repel of the tax and ended the conflict, but the calm was short-lived. In Dec 1766, Tryon began plans to build a residence and offices in New Bern, prompting the colonists in the back country to form a Regulator movement which ended at the Battle of Alamance in May 1771. The battle resulted in several men killed and wounded on both sides, several of the Regulators were executed, others jailed. Six Regulators were later pardoned and set free, one being a man named James Copeland. Tryon’s aide-de-camp during the battle was a man named Philemon Hawkins from Bute County. 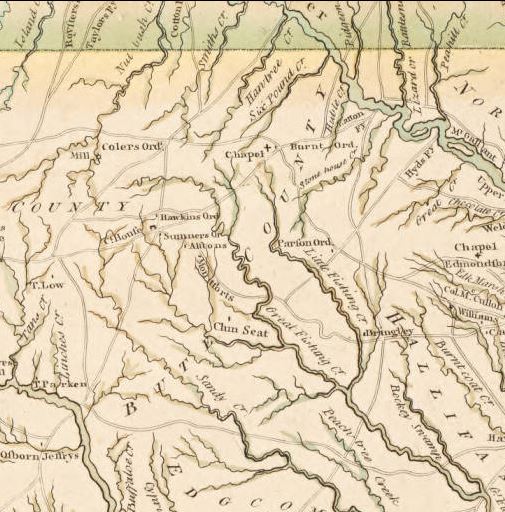 Philemon Hawkins was born in 1717 in Charles City County, Virginia. His father, of the same name, died about 1725 and Philemon moved to Bute County, Province of North Carolina in 1735, along with his mother and siblings, John, and Ann, where he quickly became the richest man in the county. He married in 1743 Delia Martin from Mecklenburg County, Virginia and they had four sons, John, Joseph, Benjamin, and Philemon Jr., who fought at his father’s side at the Battle of Alamance. Later, Philemon and his sons became ardent supports of the Revolutionary War and his sons all served in the Continental Army during the Revolution as colonels. Two daughters were also born, Delia and Ann. Philemon was a member of the Anglican church and took an active part in public affairs, serving in many public offices, and was a member of the two Provincial Congresses that met at Halifax in 1776. His signature is found in several legal documents across Bute and Warren Counties.

My interest solely lies in Philemon’s relationship with four men, William Wright, Thomas Newman, Fennell Marks and William Marks, men of Bute County. Philemon’s name appears on documents in association with these men. He made purchases at the estate sale of William Wright and his signature is found in relation to other documents pertaining to these men. I am also curious to learn if these men from Bute County may have served alongside Philemon and his son at the Battle of Alamance. According to the website Documenting the American South, Bute County provided 50 men for the cause of fighting against the Regulator movement.

Outside of his will and estate file, I have not been able to learn much about William Wright. He was most likely born in Virginia about 1730 and migrated to Granville county prior to 1764. He most likely found himself in Bute County when Granville was divided in 1764 and later lived in Warren county when Bute was abolished in 1779 to form Warren county. He looks to have commanded a great deal of respect and surrounded himself with military and community leaders of the day, like Philemon Hawkins. He wrote his will in Warren County on 21 Feb 1781. He does not name a wife but later records from his daughter in laws Revolutionary War widow pension file names her as Rocksilary Howell Wright. William listed his children as Elizabeth Wright, Susannah Wright, John Wright, who received 196 acres of land on Deep Creek bought of John Hawkins, probably the brother of Philemon Hawkins, Uel Wright who received 200 acres of land on Wolf Branch bought of William Gutrey, Tempey Marks, Simon Wright, Nancy Wright, and a grandson, Simon Long, the son of his deceased daughter. Executors are listed as Capt. Phillip Burford and Samuel Paschall. Thomas Newman, Daniel Ellington, and James Ellington signed as witness. Purchasers at the estate sale included immediate family members, John Wright, Simon Wright, Anne Wright, John Long, William Marks, neighbors, Sterling Clark, George Twitty, Francis Mallory, Wyatt Hawkins, and military and community leaders Maj. Leonard Bullock, Capt. Peter Twitty, Capt. John Hawkins, and Maj. Philemon Hawkins. 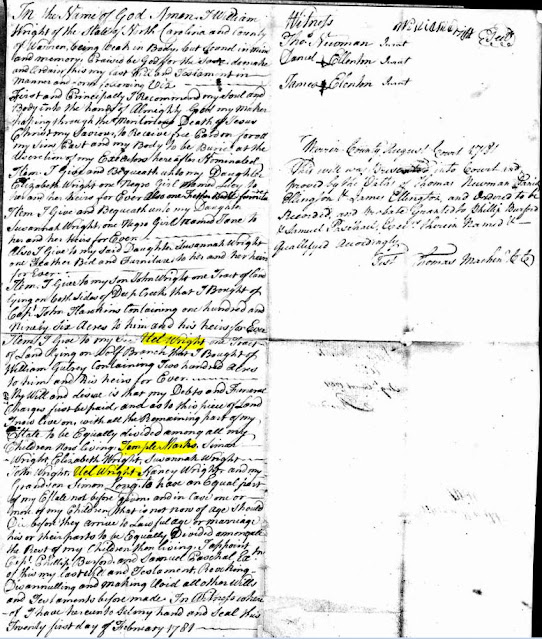 Temperance Wright, the daughter of William Wright, married William Marks. This couple is listed on the 1784-1787 State Census as living between Simon Wright and John Power. Other neighbors were Peter Twitty, Joshua Davis, Twitty Russell and Richard Wilson. William Marks is listed with one white male 21-60 years, five white males under 21 & above 60, white females all ages, four, one being his wife, and one black under 12 & above 50, total 11. 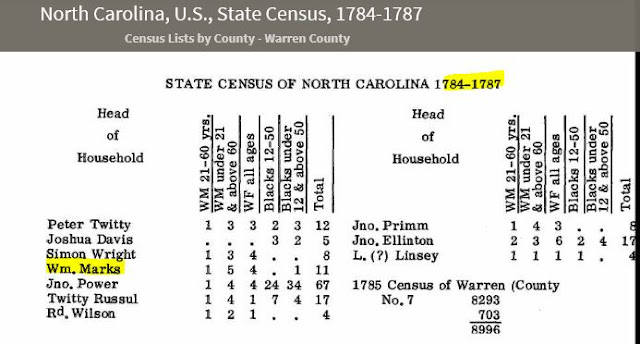 The 1790 Census for Warren County lists William Marks with five sons under 16 and two daughters, one less than the 1784-1787 State census. Did a daughter die young? I do not think so. I believe the extra female in the State Census is most likely Susannah Wright, younger sister of Temperance. William Marks is listed as her guardian in William Wright’s 1781 estate papers.

Because the overzealous Census taker alphabetized the 1790 record, I have no idea who lived next door to the Marks family in 1790. I am still searching deed records to uncover any clues to land owned or sold but thus far, have had no luck. The couple looks to have disappeared from Warren County by 1800 as they are no longer found in Census records there. 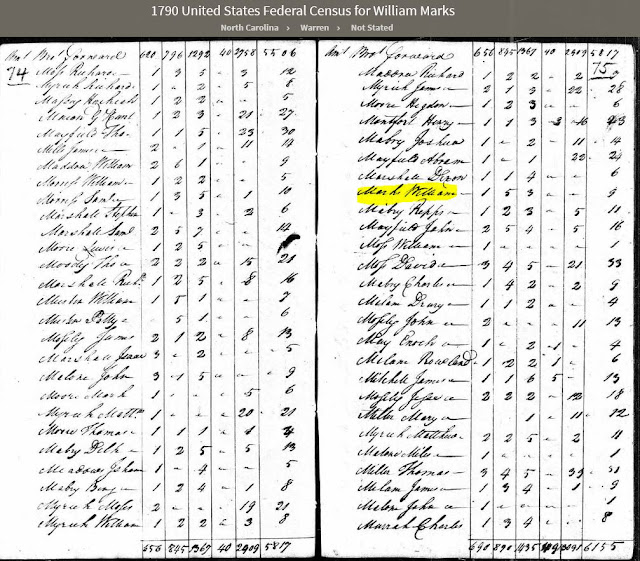 Thomas Newman, one of the witnesses of William Wright’s will, was born in Old Rappahannock County, Virginia. He migrated to Bute (later Warren) County, North Carolina and died there about 1791. He had a daughter named Amey who married Fennell Marks. Fennell and wife, Amey, evidently migrated to North Carolina with Thomas as Fennell died in Bute County in 1777. Amey and her father, Thomas, and John Hawkins Esq, son, or brother of Philemon, were the Administrators of Fennell’s estate. Fennell and Amey had at least one son, William, born about 1770.

William Marks mentioned above is most likely the brother of Fennell Marks, and not his son as there would not be enough time for a child born in 1770 to marry and have seven children by 1790, as is shown for William Marks in the Census data. I am not sure what happened to Fennell’s son, William. If the dates of birth for Fennell and Amey can be proven earlier, then William could be considered their child. Either way, without a doubt, Fennell Marks and William Marks are related in some way. Based on current information, it looks like they are probably brothers.

As a note, Amey married a second time to Richard Wilson and had at least one more child, Martha Wilson Paschall. 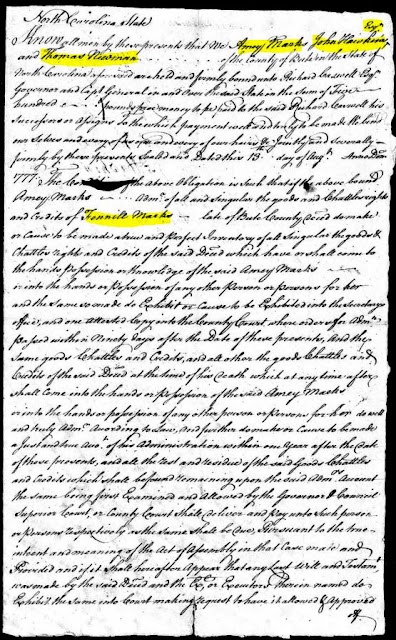 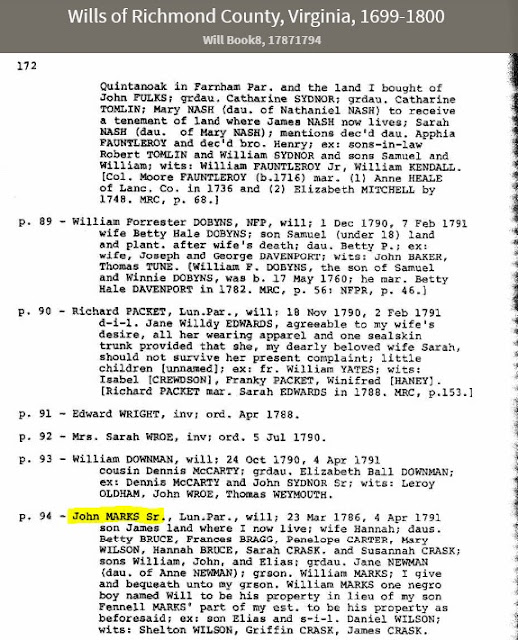 The Marks of Chatham County, North Carolina have an oral tradition handed down in their family that says their ancestor William Marks was an English Revolutionary war soldier. He was wounded in battle and left behind. He started his life in America in Chatham County, North Carolina. His first-born child was also named William. While the oral tradition is totally probable, it does not match what my DNA test results are telling me. I have several matches who claim descent from the John Marks and Hannah Eidson family in Richmond County, Virginia. It’s possible the oral tradition, since 1771, may have been altered. 250 years is a long time to keep a family story going, but this Marks line has.

William Marks is found on the 1800 Census for Chatham County, North Carolina with two sons, 10-15 and 16-25 and one daughter 16-25. I believe the children are George (more research required), Elizabeth (more research required) and Ewell. The other children, William, James, John, and Susan are already out of the home. Prior to 1800, there were no Marks in Chatham County. 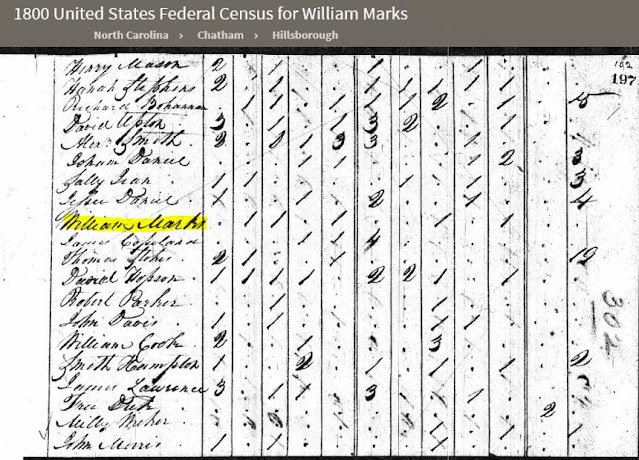 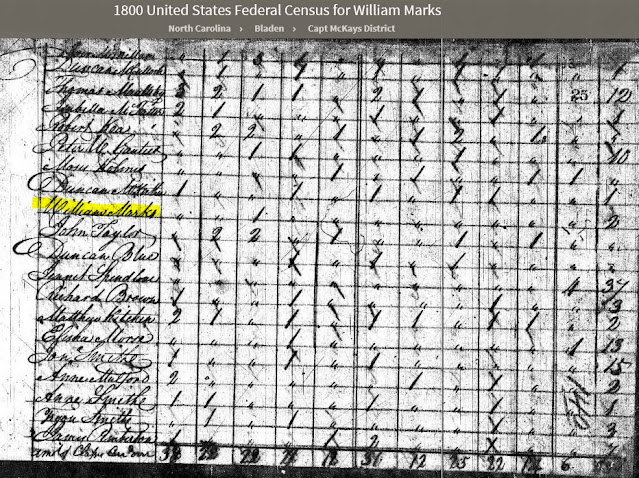 Elizabeth Marks makes an appearance in 1827 at the estate sale of John Bland. I have not been able to document her, but it is possible she is the other female listed in the home of William Marks, the elder.

Ewell Marks, probably named for his Uncle, Ewell Wright, is found in Bladen County, North Carolina in 1808 serving as chain carrier for a survey for brother William. 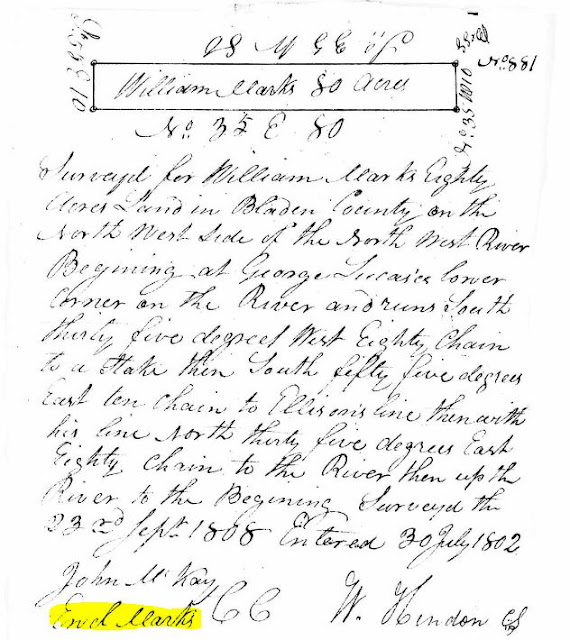 Based on the information I have found thus far, I believe the elder William Marks who is listed on the 1800 Census in Chatham as 45 years and older, making him born before 1755, to be the father of these Marks siblings. And more than that, I believe it very possible, these people are the same people listed on the 1790 Census for Warren County. Both Census's show the exact same number of children – 5 sons and 2 daughters, with the same father’s name, William Marks.

In an ironic twist of fate, William Marks, the elder, in 1800, Chatham County, lived next door to a man who bears the same name as the Regulator who fought at the Battle of Alamance and was pardoned by King George III and released by William Tryon…James Copeland.

Is it possible that William Marks, the elder, and the other men in Bute County, joined Philemon Hawkins and his son at the Battle of Alamance? Did they participate on the side of William Tryon, helping to defeat the Regulator movement and it is that battle, and not the Revolutionary War, that began the oral tradition handed down by this Marks family? 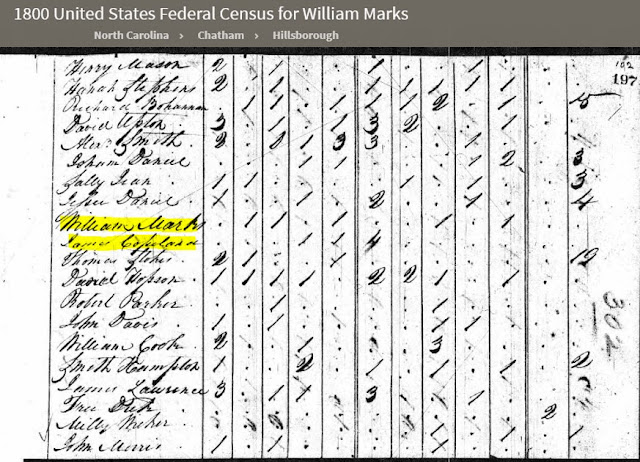 Posted by Uwharrie Roots at 6:40 PM