When researching one family, it is of no great surprise, that one will run across other families in the same county, or in neighboring counties, that have connections to one another. In Colonial America, people of the same cultural background lived in proximity of one another. They spoke the same language, were of the same religious belief, and probably all migrated to America around the same time, maybe on the same ship. These families had a common bond that held them together.

As my primary research is settled around the families who settled in Montgomery County, North Carolina, and surrounding counties, I came across Daniel McDaniel (aka Donald McDonald) while researching another family. I was reading through images at Family Search, NC Digital Collections, and DocSouth to learn more on the Robinson family. I very quickly determined that Daniel McDaniel is connected to the Charles Robinson family through his marriage to Keziah Robinson, daughter of said Charles Robinson, of Anson County, later Richmond County, and is often seen as Donald McDonald, and is very much confused with Donald MacDonald, the British General whose army was defeated at the Battle of Moore's Creek Bridge and taken prisoner.

While Keziah Robinson did marry a man named Daniel McDaniel and he is sometimes seen as Donald McDonald in documents, it was NOT the man bearing the rank of General whose army was defeated at the Battle of Moore's Creek Bridge.

Let’s first determine who British General Donald MacDonald was. General Donald MacDonald was born between 1710-1712 in Scotland and fought at the Battle of Culloden in 1746 and was at the Battle of Bunker Hill in 1775. North Carolina Governor Martin appointed him and Colonel Donald McLeod to North Carolina in 1775 to recruit Highlanders to fight for the King's cause. Under the guise of visiting friends and relations in the area in Cross Creek, they secretly began to recruit a Highland army of about 1600 men. While making their way to Wilmington to join other forces, they had to cross Moore's Creek Bridge where they encountered the Patriot force and were defeated. General Donald MacDonald became ill and was lodged 8 miles from Moore's Creek Bridge and was not in the fight but was captured later. Colonel McLeod was killed during the fight. Allan MacDonald, husband of the famous Flora MacDonald who assisted Prince Charles Stewart’s escape from Scotland after the battle of Culloden, was also captured. 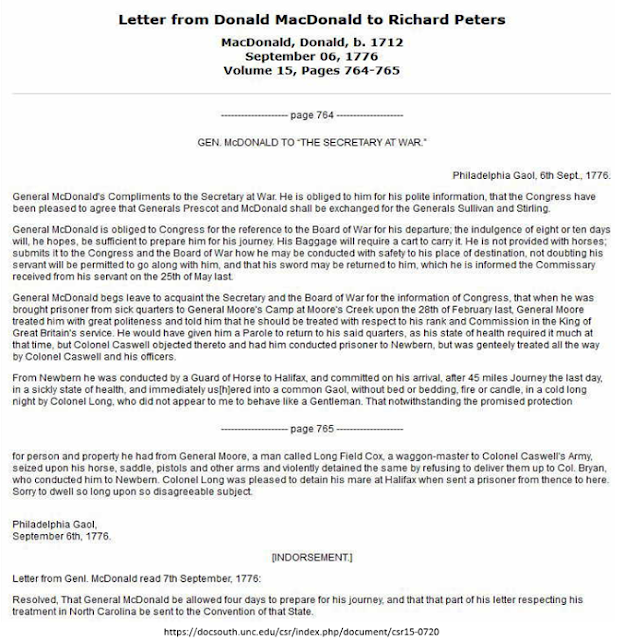 Both Allan MacDonald and General Donald MacDonald were taken to Halifax and jailed but were later moved to a prison in Philadelphia to serve 7 months in jail there before being exchanged - "Generals Prescott and McDonald shall be exchanged for the Generals Sullivan and Stirling" says a letter between George Washington and John Hancock. General MacDonald was provided 4 days to "prepare for his journey."

After clearing up some confusion regarding the exact rank of General MacDonald, the prisoner exchange did take place in Oct 1776. Donald MacDonald and Allan MacDonald remained with the King's army in America but by 1784 were back in England where Allan MacDonald and other loyalists who had left America, filed for loyalist claims for land or property lost because of the American Revolution. Many of those claims provided affidavits from Donald MacDonald. 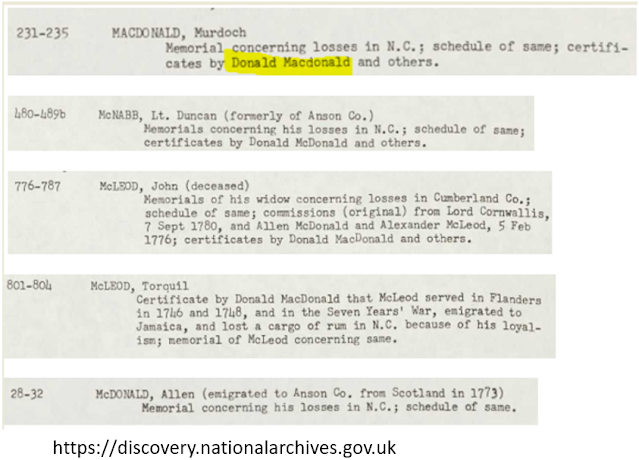 Between 1784 and 1793, General Donald MacDonald made his way back to Scotland where he died in 1793 at Kingsburgh, the hometown of Flora and Allan MacDonald.

In contrast, Daniel McDaniel (sometimes seen as Donald McDonald), the real husband of Keziah Robinson, can be found in Richmond County signing a bastardy bond dated 1800 for 50 pounds current money for the security of John Webb who fathered a child outside the bounds of marriage with Milly Tucker. 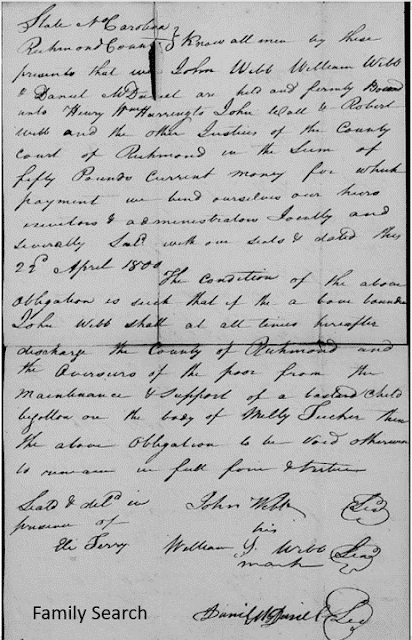 Daniel McDaniel (aka Donald McDonald) purchased this tract of land from William and Elizabeth McDonald of the county of Anson in 1774. The deed in Anson county shows the exact same meets and bounds as the deed in Richmond county. 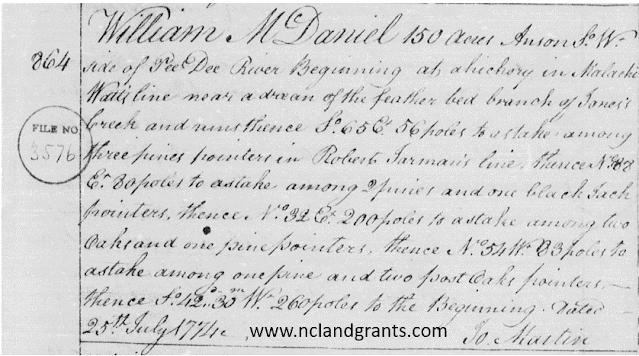 I have been working to prove (or disprove) William and Elizabeth McDonald, who are mentioned in the Anson county deed, are the parents of Daniel McDaniel (aka Donald McDonald) who married Keziah Robinson. It is also a possibility that William and Daniel are brothers. 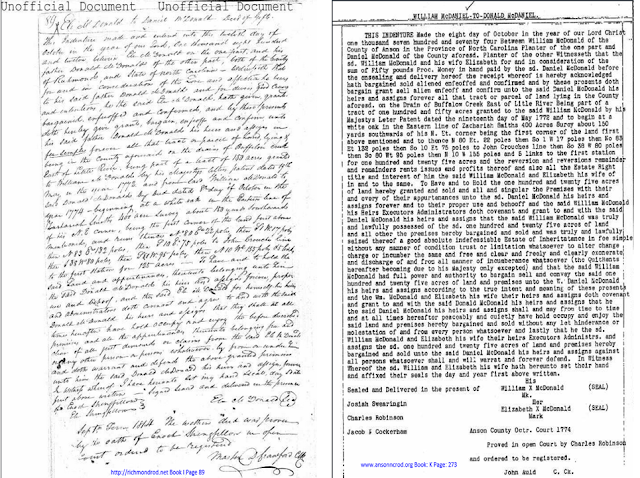 Ann Meguair, in September 1784, appeared before John Pemberton, a Justice of the Peace of the county of Richmond, and swore an affidavit that on a Sunday, about the last of June or the beginning of July, in the year 1780, Captain Townsend Robinson, with a company of Tories, came along the road, and she saw Mr. Charles Robinson of Little River with his two sons, William, and Charles Robinson, and his two sons in law, Benjamin Powell, and Daniel McDaniel, all armed with guns. 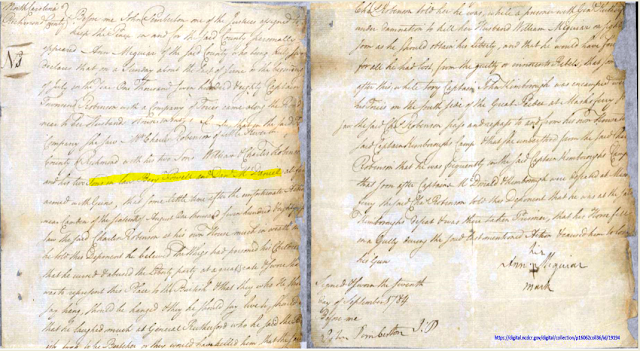 William Meguair, no relationship stated in the documents to Ann Meguair, but assumed to be the husband of Ann, also appeared before the Honorable William Harrington in September 1784, and swore his affidavit, that he saw Charles Robinson with his sons in law, Benjamin Powell, and Daniel McDaniel, in arms with Captain Townsend Robinson. 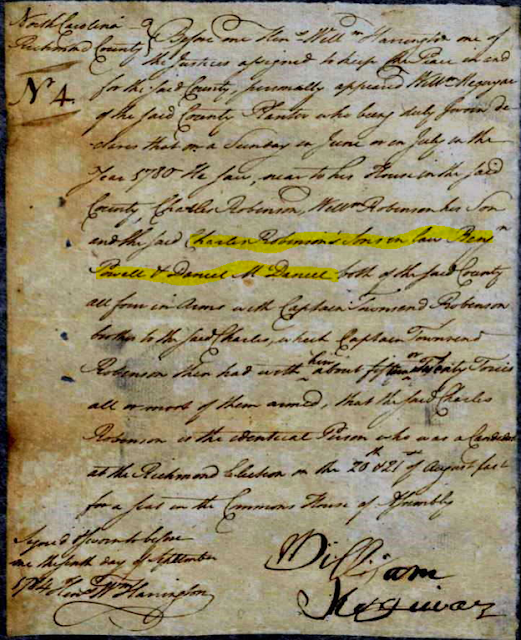 Daniel McDaniel provided his own statement on the 9th of October 1784, [Note: this is around the same time that General Donald MacDonald is found in England writing affidavits for loyalist claims] stating that in the year 1780, when the British troops were at Pee Dee, there were 20 or 30 people at his house at harvest when Townsend Robinson came and said he had a Captain’s commission under the British and encouraged the people to take up arms on behalf of the King. Charles Robinson, who was at the home of Daniel McDaniel, argued with Townsend Robinson and told him he was wrong and told the people not to take up arms but to stay at home.

Daniel McDaniel also stated that on a Sunday morning, sometime before Gates’s defeat [August 16, 1780], that he was at the house of Charles Robinson and was told by Charles that William Dudley had sent for him and asked that he and Benjamin Powell ride with him and they consented to go. After riding about a half mile, they were overtaken by Townsend Robinson and 8 or 10 other men near Meguiar's house. The party continued, took care of the business at Dudley's house, and returned home. 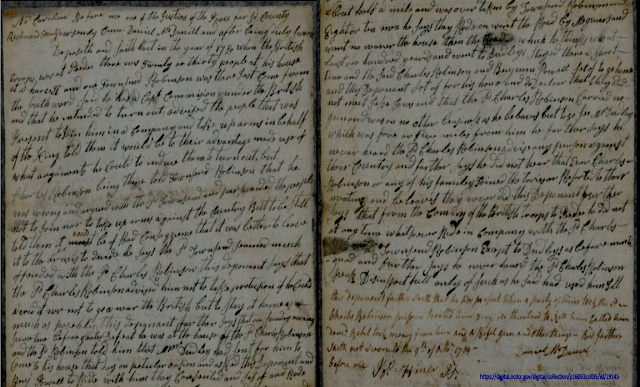 Since these depositions took place in 1784, I ventured to the North Carolina State Census 1784-1787 and found Daniel McDaniel, Charles Robinson, and Benjamin Powell, all living together in the same vicinity. 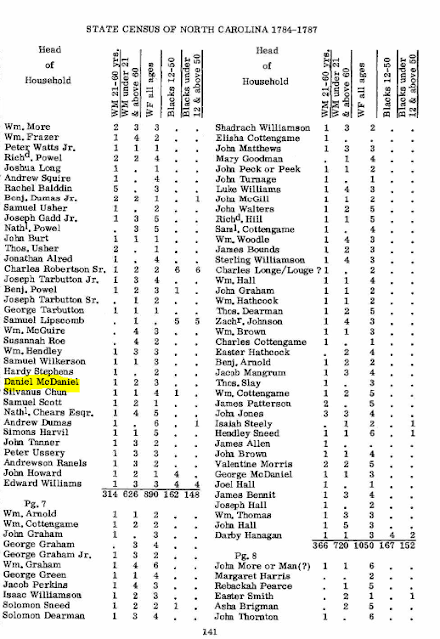 On the US GEN WEB Project page is found several records that were translated by Myrtle Bridges. I have yet to find the actual records but feel certain they are part of the collections at Family Search.

In October 1790, Daniel McDaniel was charged with stealing a black mare from William Parmer. 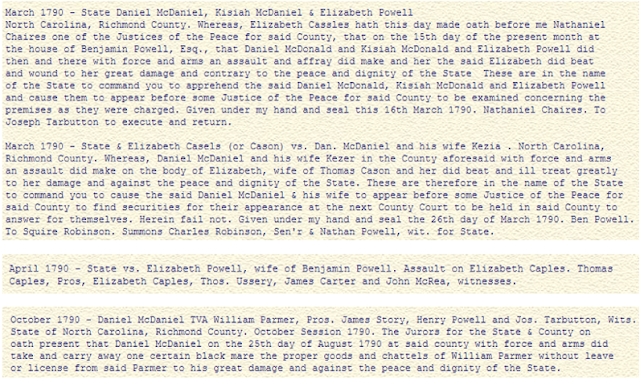 I found two Daniel McDaniel’s on the 1790 Census for Richmond County, North Carolina. Both were born prior to 1774. Both had males older than age 16. Both had several females in their household. The man on page 167 has one slave residing in his household. While it is impossible to tell these men apart, the one on page 167 lived closest to Charles Robinson and this being the only clue that is found to make an educated guess on which one of these men may be the son in law of Charles Robinson. 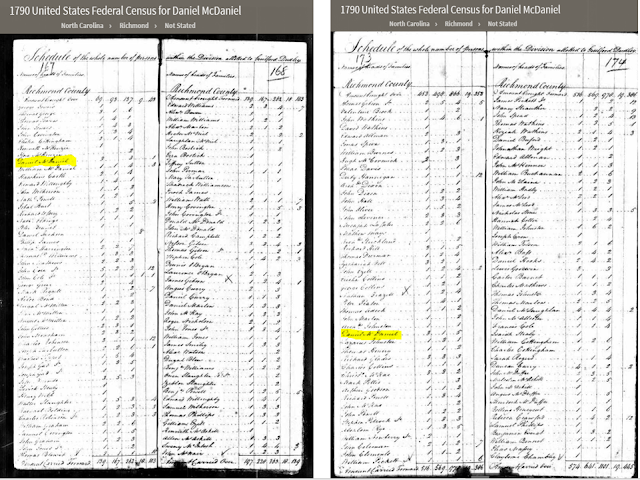 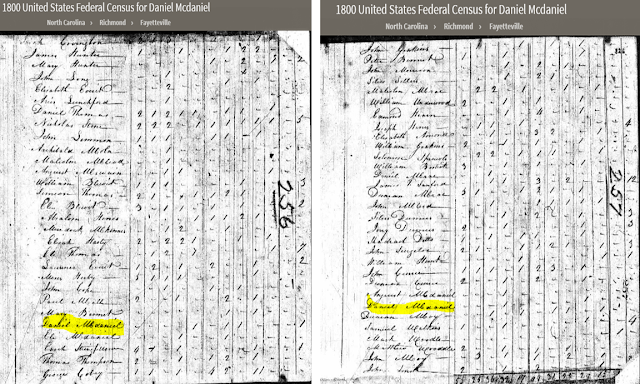 Neither of the Daniel McDaniel’s can be found on Census data in 1810 but a Daniel McDonald, age 46 or greater, is found on the 1820 Census for Richmond County living with a female aged less than 10 and one other female age 26-44. The Census notes that this person is engaged in Manufacturing. 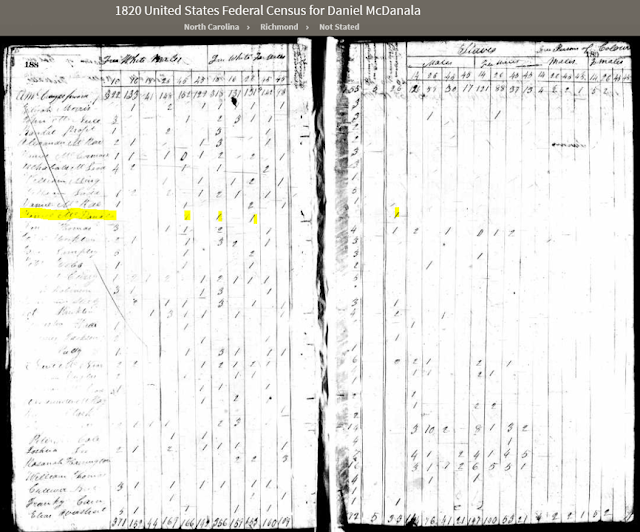 Daniel McDaniel (aka McDonald) of the county of Richmond, wrote his will on 8 Oct 1824 making note of his beloved wife ‘Kizziah’ McDaniel who was to receive all property consisting of five Negroes to wit: Lucy, Lettie, Talton, Major, and Cherry, as well as all the kitchen furniture, and all crop and farming utensils of every kind during her natural life or widowhood and then to be sold and given to his son Eli McDonald, his daughter Martha Stringfellow and the surviving children of daughter Polly Bostick deceased. Eli McDonald and son in law Enoch Stringfellow were appointed Executor of the last will and testament. Signed in the presence of Robert Powell, William Capel, and Finley Harbertle (?). Proven in open court by Robert Powell April term 1826. 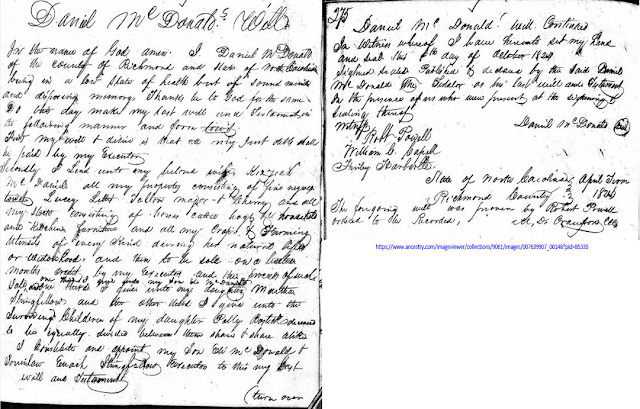 Posted by Uwharrie Roots at 5:13 PM