The location of the third county seat of Montgomery, North Carolina was settled about 1792 at the confluence of the Yadkin and Uwharrie Rivers between Island and Dutchman’s Creeks. The people of that time called the town Henderson; today, we call it Old Town.

On a map located at the State Archives of North Carolina, is shown a plat of Montgomery County depicting the date of circa 1794-1813. The map delineates a 20-mile road from Henderson Town to Colson’s Ferry and proposes a new road from the ferry to Little River.

The Colson family had settled in Bladen County, later Anson County, prior to 1750. These parts later became Montgomery and Richmond in 1779 when Anson was divided. Their loyalties lay with King George III. When William Lee Davidson’s, for whom both Davidson County and Davidson College are named, Whig militia defeated Samuel Bryan’s, the father-in-law of Daniel Boone, Tories on land owned by William Colson, and near his cousin, John Colson’s ordinary in 1780, the Colson families fled.

In 1781, orders were sent to construct a supply depot on a high hill near the east bank of the Pee Dee River to support General Greene’s army. General Thaddeus Kosciuszko oversaw the construction and built the installation on a steep hill with a commanding view of the Pee Dee Road (current day Montgomery-Richmond County Line Road) and Colson’s Ferry on the Pee Dee River. Records indicate a stockade, surrounded by trenches, was in place. The depot became known as Colson’s supply depot.

Today, Historical Marker K-39 and L-51, stand as memorials to this place. 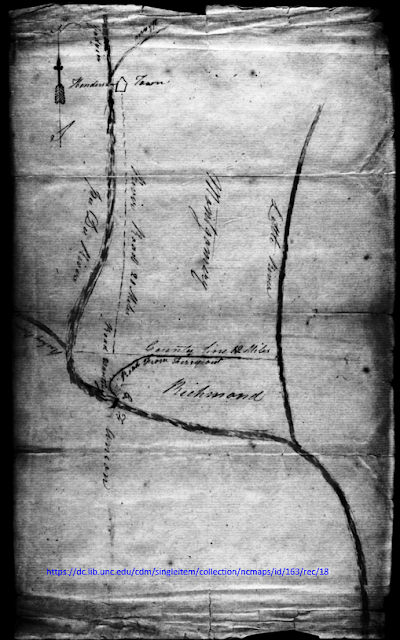 The earliest mention I can find of Henderson in Newspapers is an 1804 article noting tracts of land that were sold to pay taxes for years 1802 and 1803. Thomas C. Williams, Sheriff of Henderson, sold the land at the courthouse in the Town of Henderson on 29 June 1804. Sadly, the purchase deeds no longer exist due to destruction in courthouse fires. The Newspaper article does provide us the names of people who lived in the county and on what creek their land was located. 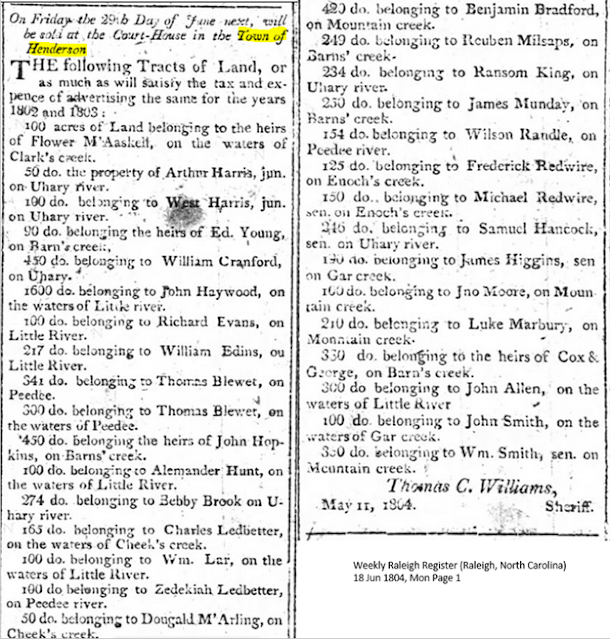 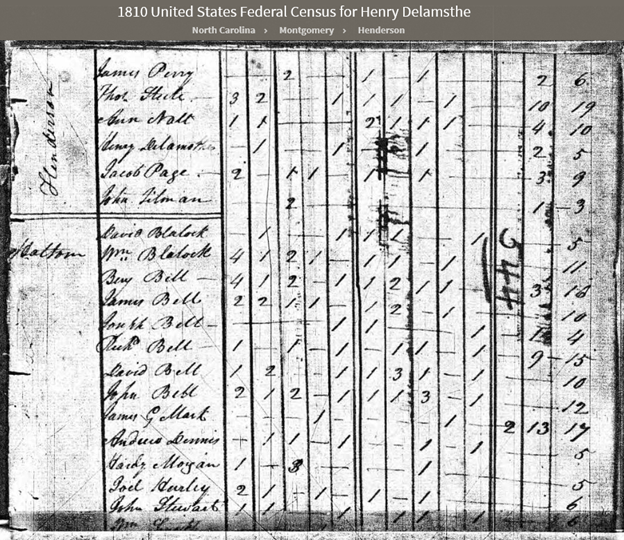 The most famous settler in this area was probably Henry Delamothe. Originally from France, Henry migrated to America in the early 1800s in hopes of finding wealth in the North Carolina gold rush. Henry quickly obtained a large tract of land in Montgomery County, to include the old county seat of Henderson. Dr. Francis Kron, nephew-in-law to Henry, made a journal entry in 1835 writing that his wife’s uncle, Henry Delamothe, and the heirs of one McArthur, owned the town called Henderson.

Henry Delamothe passed away about 1838. He must have left a mark on Montgomery County as the people were still talking about him in 1879. According to an article dated 3 Jul 1879, the grave of Henry Delamothe could still be seen, enclosed by a neat, stone, wall. Henry is buried in Old Town. 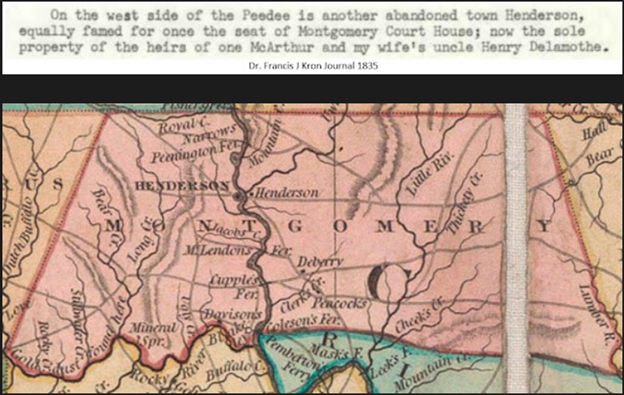 Alexander McArthur, the other inhabitant who Dr. Kron mentioned in his journal, was probably of Scottish descent. He died around 1805. Donald McInnish, who lived in Fayetteville, formed in 1783 from Cross Creek and Campbellton, was the Administrator of McArthur’s estate. I have not yet found a complete estate record for him, but Newspapers and documents found elsewhere, i.e.: Dr. Kron’s journal, provide enough information to confirm Alexander lived in Henderson and, most likely was a merchant, owning perhaps a General Store in the town of Henderson, supplies probably being funneled from Donald McInnish in Fayetteville.

In 1809, Donald McInnish placed an ad in the Weekly Raleigh Register advertising the houses and lots belonging to the estate or Mr. Alexander McArthur, situated near the courthouse in Henderson, lately occupied by Matthews & McInnish were for rent. 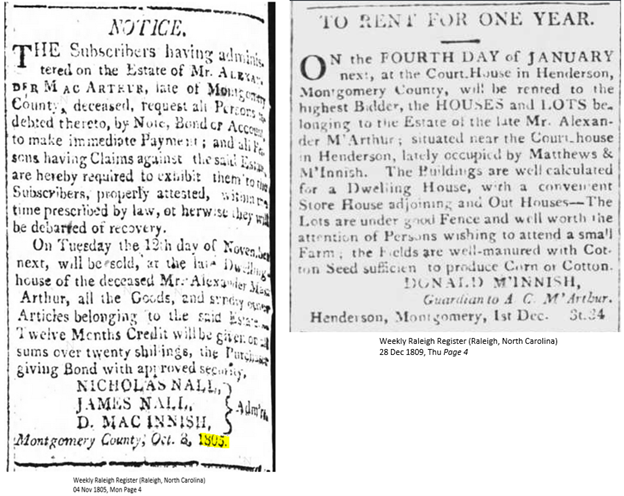 Ann Nall, also an inhabitant of the town of Henderson, in 1812, advertised in the North-Carolina Star, a Raleigh paper, that she was renting to the highest bidder for one year a Tavern and Boarding house. The paper states that the establishment had been in operation for at least 15 years (since 1797) and had made more money than any other part of the county. When people came to the county, they rented rooms at the Nall boarding house. 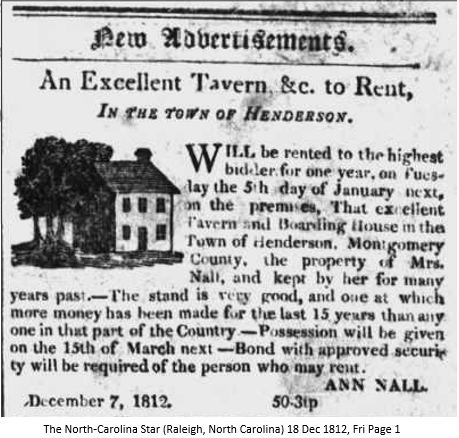 In 1823, James Crump advertises for sale 35 tracts of land in the town of Henderson to be sold at the courthouse in Laurenceville for ready money. Henderson has been abandoned and Lawrenceville is now the county seat. 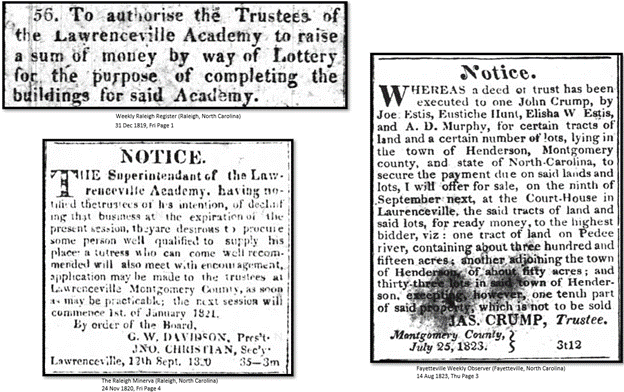 Years later, in 1889, a Newspaper called Carolina Watchman, claims Henderson was named for the Honorable Archibald Henderson, an eminent lawyer of Salisbury, North Carolina. Born in Granville County, North Carolina in 1768, he attended the common schools. After graduation from Springer College, he moved to Salisbury, North Carolina, about 1790, where he studied law and was admitted to the bar and commenced practice in Salisbury. He died 21 October 1822 and is buried there. The Archibald Henderson Law Office at Salisbury was listed on the National Register of Historic Places in 1972.

Archibald Henderson built his law office, shown in the above and below picture, about 1796. The building is noted as one of the best-preserved examples of the era and depicts what a similar building may have looked like in Henderson, or in any courthouse town, in the late 1700s. 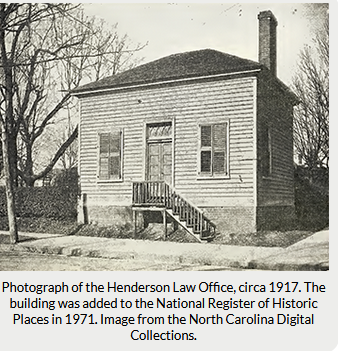 We have no buildings that survive from Henderson. However, there are buildings from other areas of North Carolina, like Archibald Henderson’s law office in neighboring Rowan County, that show the architecture from the era. The Carteret County courthouse-built c. 1796 shows a one room building with modest steps leading to the courthouse door. It is probable that the courthouse in Henderson was of a similar wood or possibly a log structure. 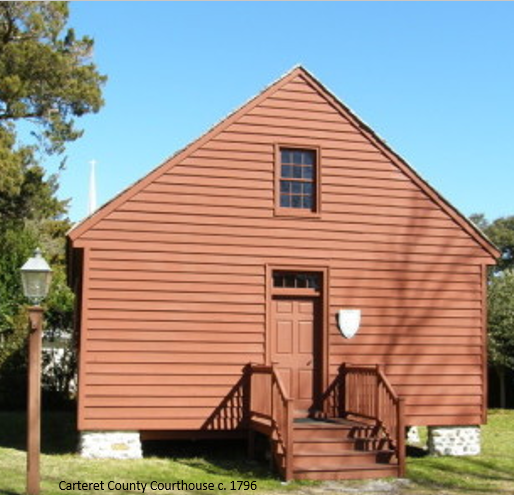 Today, we rarely think twice about travel. Roads are plentiful today. But in the 1700 and 1800s, that was not the case. People were driven to come up with new and unique ways to move themselves and their goods to the nearest market towns to sell or trade. Farming was the biggest trade, but produce was perishable and had to be moved quickly and sold soon after arriving at market.

An 1889 Newspaper provides us the reason that Henderson was abandoned. The Newspaper notes that Henderson was laid off at the mouth of Uwharrie River and was scourged out of existence, made uninhabitable and desolate from fever. Attempting to make Henderson, and Montgomery County, profitable, the people dug canals to avoid the shoals in the Pee Dee River.

These shoals were an accumulation of sediment in the river and were potentially dangerous to water vessels. Montgomery County was situated between two marketplaces, Fayetteville, on the Cape Fear River, and Cheraw, South Carolina on the Pee Dee River. People needed a way to move merchandise faster than wagon. However, digging the canals brought disease to the workers and the inhabitants of the county. An outbreak of fever, perhaps Malaria or Typhoid, brought Henderson to its knees.

In 1900, The Morning Post, a Newspaper in Raleigh, published an article called A Lost Town. While the article gets some facts wrong, such as Henderson being the site of the first courthouse, it was at least the third, and states that Dr. Kron’s wife was the daughter of Henry Delamothe, she was his niece, the paper does provide some genealogy gold by telling us that Jonathan Bell, now 92 years old, provided some of the information for the article. Jonathan Bell was the son of Benjamin and Elizabeth Ledbetter Bell. He was born about 1808 in Henderson and died 1901 in Stanly County.

I dare say that Henderson is not a lost town. Its rich history is alive in the Uwharrie area of Montgomery County. We just call it by another name now – Old Town. 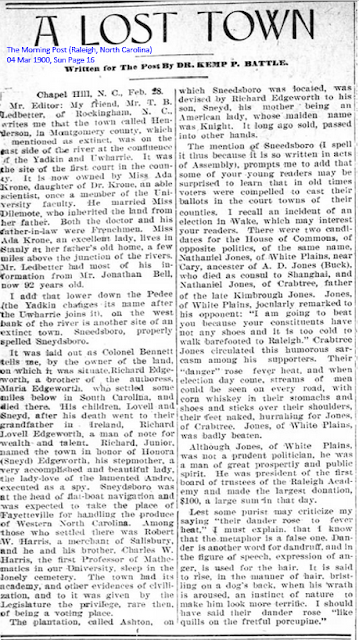 Posted by Uwharrie Roots at 1:14 PM