The Heirs of John Kirk, Dec’d

According to Friends of Morrow Mountain website, early settlers to what was then Montgomery and now Stanly County, “A 1733 map that included the area that became Stanly County showed no European settlements but by May of 1773 Henry Munger settled along the Yadkin at a place opposite the mouth of the Uwharrie River and a little down from the turbulent Narrows, where he established a ferry to cross the Yadkin/Pee Dee. When Montgomery County was formed in 1779 the NC General Assembly specified that the first court should be held in the home of Henry Munger and a year later the first Montgomery County Court House was completed. From 1788 to 1794 many of Munger’s holdings, including his early ferry, were purchased by James Tindal. (There were several ferries in the area.) The Montgomery County Court House was moved across the river to the new community of Henderson in 1796 and to several other locations near the Pee Dee River. In 1816 the courthouse was moved to Lawrenceville and eventually to Troy.

Others settled nearby and this growing community, that became known as Tindalsville, attracted other adventurers like Munger and Tindal who thought that significant money could be made by transporting goods by commercial barges down the Yadkin/Pee Dee to Cheraw S.C. and onto Georgetown at the coast. They thought Tindalsville would become an important riverway transit hub. These early efforts to move goods downriver did not prove successful nor did later far more ambitious plans to build canals, discussed at length in the NC General Assembly, prove successful. The failure of the commercial transport of goods down the Yadkin/Pee Dee River was perhaps the major reason that Tindalsville gradually lost its drive and energy as a community. Tindalsville was granted a US Post Office on July 1, 1799 and it was permanently closed in 1824.

The Salisbury/Fayetteville Market Road and the ferry crossing at Tindalsville proved to be the primary way of transporting the growing number of goods. John Kirk purchased and operated the now vital ferry and the Kirk Inn was built for ferry travelers. Kirk’s Ferry later became Lowder’s Ferry. Several well-established homesteads were spread around what is now park land. Dr. Francis Kron (1798-1883) and his daughters Adalaide (1828-1910) and Elizabeth (1831-1896) were the most famous of the homesteaders. Kron was the key physician for the area and was very involved with the establishment of Stanly County in 1841. The Kron homestead has been re-created at the park. Kron purchased his 234-acre homesite in 1834 from the Rev. McGregor, “a Scotsman, who preached for the Baptists.” Other noted sites include: Dicksville School, Stony Hill Methodist Church, and homesites of Rush, Lilly, Fesperman, Lowder, Russell, Kirk, Blaylock and Stoker.”

At Family Search is located a plentiful array of North Carolina estate files; some ranging to just one page and others to hundreds of pages. The North Carolina estate files are arranged in a user-friendly way and I found John Kirk’s file among others with a surname that begins with the letter K. In parenthesis next to the names is added the year of probate, which is a nice thing to have. Clicking on the name, the file opens in a viewer where it can be enlarged to make reading easier, downloaded and saved to a personal drive or printed to include in a family book.

Upon opening the file, the first thing I noticed was the tab on the folder. The contents of this file were donated in 1970 by Mrs. A.B. Marshall of Houston, Texas. I am not sure who she is but am grateful to her that she would share such valuable information from her own private collection for others to use. Without these types of donations, these records are lost to history forever. So, thank you, Mrs. A.B. Marshall.

The first two pages in the collection show a map of the survey of the land division of John Kirk to his legal heirs. It is difficult to read as shown so I downloaded the images and put the map together on one page and listed the heirs to make it a bit more user friendly. 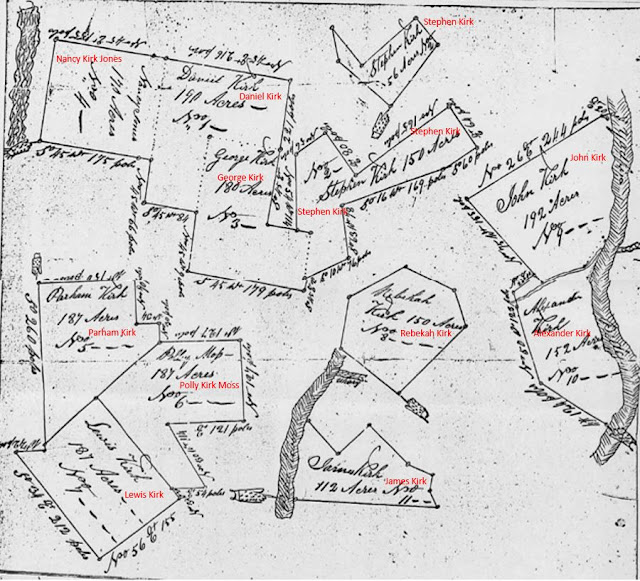 There is a total of eleven pages in this file and, due to multiple copies of pages, it a bit of a challenge to put it all together. I found it easier to work with by cropping out the ‘Divisions’ and transcribing them separately, as seen below. At the bottom of the second page begins the description of the allocation of the land. 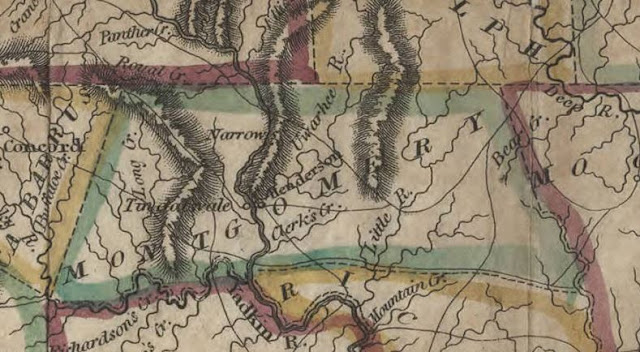 The above plats represent the lands of John Kirk Dec’d and agreeable to an order of court of October session 1819 I did proceed to lay off and survey for the commissioners appointed by sd order to divide the sd lands between the heirs of sd Kirk Dec'd and have agreeable to their directions divided the same in the manner and form following with the valuation and number of each division their various courses and distances & below stated.

Division the first lot No 5 valuation $561 to Parham Kirk bounded as follows Beginning at a pine standing about fifteen rod south of the county line and runs thence south 256 poles crossing Ryals Creek to a sweet gum the corner of lot No 7 thence with that line and the line of lot No 6 North 50 East 238 poles to a pine by two pine pointers thence north 30 poles to two pines on Millers line thence as his line West 34 poles two ??? thence North 70 poles to a corner thence West 150 poles to the beginning. Containing one hundred and eighty-seven acres as will appear in the above plat. 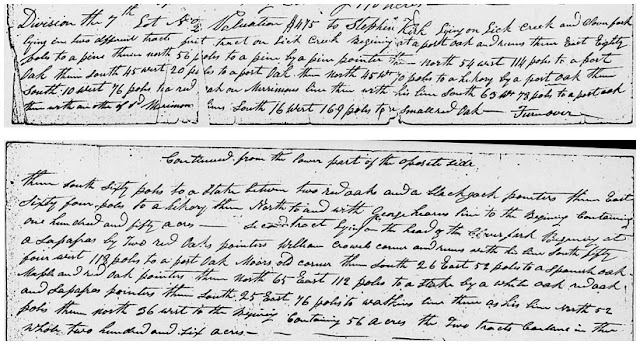 Division the 8th and Lots No 8 valuation $250 to Rebekah Jones lying in two tracts adjoining one tract of 150 acres called the Walkr (Walker?) field tract beginning at a post oak by a read oak pointer courses not known but may be had by having reference to the Petition (?) granted to sd John Kirk Dec’d also fifty acres adjoining the same survey William Harris and Richard Parker's lines and Stephen Kirk's also.

Division the 10th Lot No 9 called the Tindalvile Tract valuation $500 to John Kirk. Beginning at a maple by willow oak the beginning of Lot No 10 and runs with the line of said lot north 75 west five poles to a small sweet gum thence south 53 poles to a stake in the road below where George Kirk lives between an ash and sweet gum pointers thence along said road south 39 west 73 poles to a stake between two pines thence North 75 west 129 pole thence north 26 east 244 poles to a stake thence east to the River thence down the various courses of said River to the beginning containing one hundred and ninety two acres.

Division the 11th and Lot No 11 valuation $1000 to James Kirk called the Berry tract lying on the east side of the Pee Dee River beginning at a hickory standing at the mouth of Island Creek and runs north 25 east 220 poles to a post oak thence west 28 poles to the road thence with the various courses of sd road to the Town Line of Henderson thence with the town line So 20 East 6 poles to a stake thence south 70 west 68 poles to the River containing one hundred and thirteen and ¾ acres by an addition of 2-3/4 acres being added which by his on the east branch of the river sold to John Kirk Dec’d by the commissioners appointed for that and other purposes containing in the whole on thousand nine hundred and seventy five ½ acres by estimation that the valuation of the whole amount is seven thousand and twenty three dollars.

Made out for the commissioners this the first day of January 1820. Britain Chappell 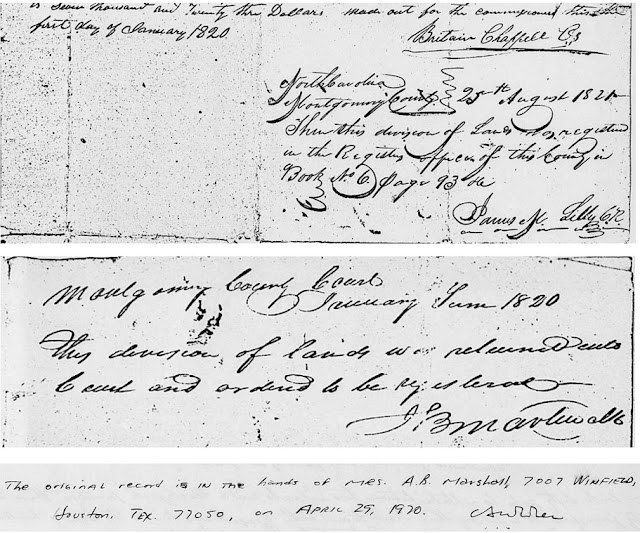 Posted by Uwharrie Roots at 2:28 PM