I recently had the privilege to visit Stanly County and toured the property that belonged to James Marks, my fifth great uncle, in the 1820s. James moved his family from Chatham County, North Carolina to then Montgomery (now Stanly) County, North Carolina, sometime between 1820 and 1825. He purchased land in the area of Stony Mountain, around current day Clodfelter Road.

What brought James to Montgomery County is a mystery to his descendants. 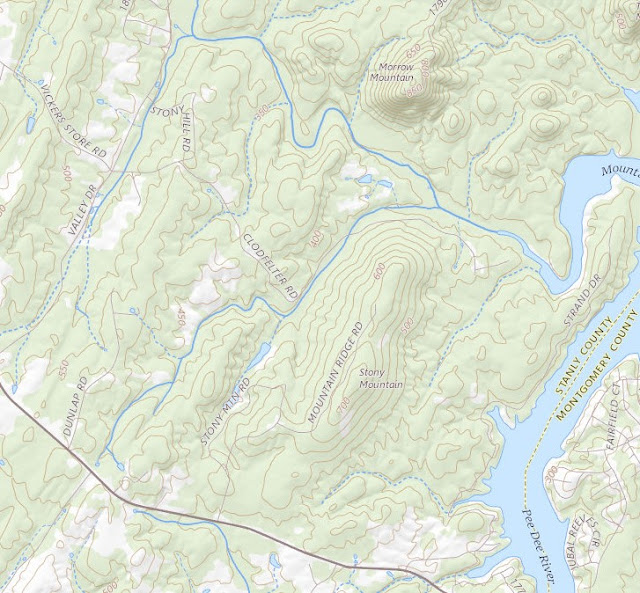 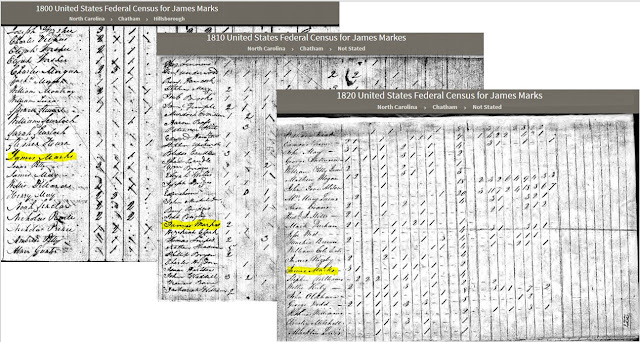 I do not believe that James was born in Chatham County, nor were any of his siblings. Chatham was formed in 1771 from Orange County, which formed in 1752 from parts of Bladen, Granville, and Johnston Counties. Prior to 1800, there are no Marks in Chatham or Orange Counties, North Carolina.

I believe that ‘Daddy’ Marks is the William Marks found on the 1800 Census for Chatham County listed as over the age of 45, making him born prior to 1755 and the perfect age to be the father of James and his siblings. I am now researching on where William Marks may have come from.

Family research has found several children who may be the siblings of James. We know for sure that James had a brother named John, who is my direct line, and who married Mary Gunter, the sister of James’s wife, Caty Gunter Marks. Both Caty and Mary are listed in the will of their father, Isham Gunter, Chatham County. John Marks is found many times in Montgomery County, North Carolina. He is often found in Daniel Freeman’s General Store ledger from the 1830s. He also signed the petition to divide Montgomery and form Stanly in 1838. John is never found on a Census for Montgomery County, rather, he is faithfully in Chatham County and found on that Census for years 1800-1840.

Other siblings to James and John include William Marks Jr who is found early in Bladen County and married Margaret Salter, the daughter of William and Sarah Lloyd Salter. Much research has been done on this family line. Susan Marks, another possible sibling, married Abner Gunter of Chatham County and lived her entire life there. Ewell Marks, who is found in Bladen County performing Chain Carrier duties for his brother, William Jr, and the McKay family.

Lastly, is George Marks, who is found on no Census, but one mention is found of him in one obscure record eluding to the fact that George married the daughter of Richard Kennon of Chatham County who died in 1793 leaving a widow, Celia Ragland Kennon and children Elizabeth, Mary, William, Richard, John, Charles, Celia and Thomas. Richard’s probate records show that at the time of his death, his older daughters, Elizabeth and Mary, were married and mentions their husbands in the petition. The only daughter who was not married was Celia. I am working to track her down, but she seems to have disappeared. 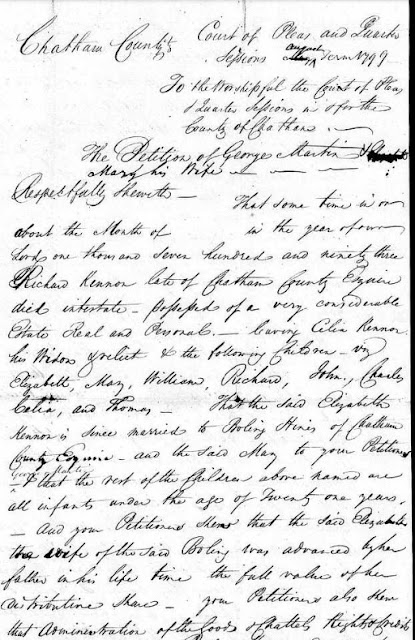 Except for Ewell Marks, and George Marks of whom I know nothing about, all these Marks siblings look to have died prior to the 1850 Census so there are no clues provided as to what state they might have been born as would be listed on Census records beginning in 1850. My cousin has written a fascinating Blog about Ewell Marks finding a possible birthplace for him as Fauquier County, Virginia as noted in his 1812 military record.

From the Fauquier Historical Society webpage, I found that the “area now known as Fauquier County was listed as part of the Northern Neck of the Colony of Virginia by Captain John Smith in 1608. In 1759 Fauquier County was formed from a portion of Prince William County. The name Fauquier was chosen in honor of Francis Fauquier, the Governor of Virginia from 1758-1768. The county encompasses 666 square miles of land in the Piedmont region of Virginia. Today it is best known for its picturesque rolling hills, horse farms, wineries, and history.”

So, it is very possible that 'Daddy' William Marks was born in Prince William County, Virginia prior to 1755 and found himself living in Fauquier County as a young boy when the new county was formed. By the time Ewell was born in the late 1770s to early 1780s, Fauquier County, Virginia was a hotbed of Militiamen, Soldiers and back country farmers who were entrenched in fighting the Revolutionary War. 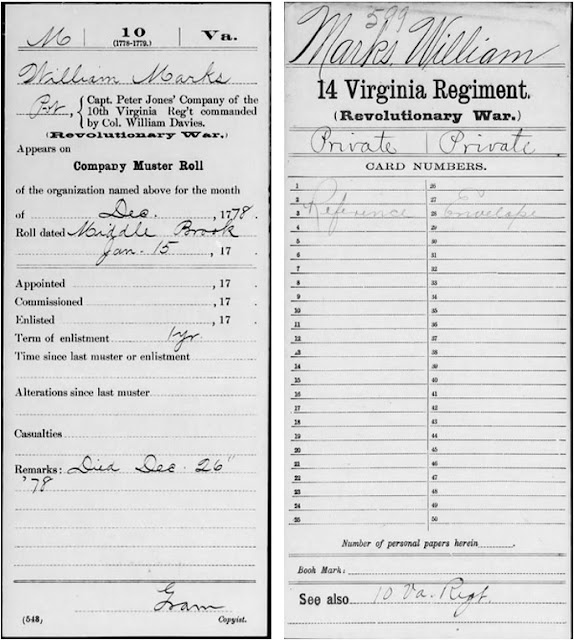 Revolutionary War pension files for Virginia show Edward Marks who was born in the county of Surry in 1757. He filed for his pension on 28 Apr 1834 in Surry County where he resided when he enlisted and continued to reside since. Not much else is known of him from the file.

Captain Isaiah Marks, whose Revolutionary War pension is filed for by Thomas Marks who states that he is Isaiah’s only brother and heir at law. Isaiah Marks looks to have died in 1785, single, with no issue. However, all his brothers and sisters, nieces and nephews are listed in the pension file. This Marks line is connected to a Rev. John Marks and Uriah Ledyard. An internet search on these names will yield much data.

Some descendants of this line migrated to Kentucky and Tennessee.

The last Marks found in Virginia is John Marks who married Lucy Meriwether Lewis in Virginia, the widow of William Lewis. William and Lucy were the parents of Meriwether Lewis who commanded Jefferson’s great expedition to explore the Missouri and Columbian Rivers from 1804 to 1806. John Marks was connected to President Thomas Jefferson as his brother had married Anna, the sister of the President. More information can be found on this Marks line at www.monticello.org.

This Marks line migrated to Georgia and spread to Alabama and possibly Arkansas, Kentucky, Tennessee and Ohio. 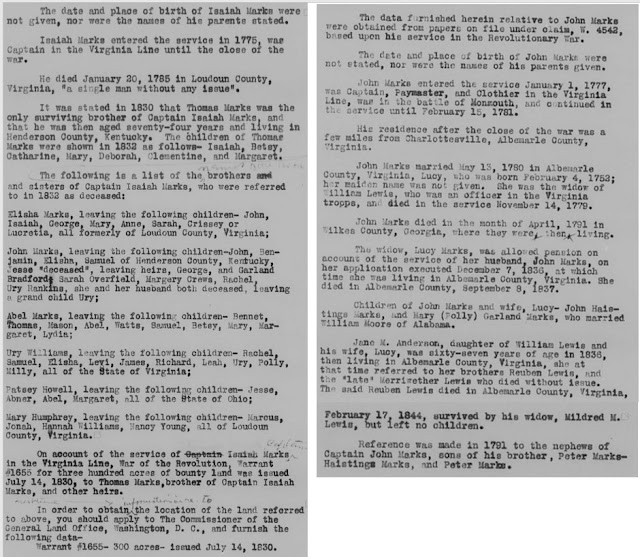 I also explored the William Marks who lived in Warren County, North Carolina. He married Tempy Wright, the daughter of William Wright and Rhocksilary Howell. From Abstracts of Warren Co., N. C. Will Book 3 April 1779 - May 1783, from Original by Mary Hinton Kerr, I found that William Wright’s 1781 will mentions his daughter Tempy Marks. Of interest, Tempy has a brother named Uell (Ewell). I have not found the names of the children of William Marks and Tempy Wright.

I found that William Marks made a purchase at the estate sale of William Wright in Nov 1781.

There is a possibility that William Marks who married Tempy Wright is the son of Fennill Marks who died in Bute County, North Carolina in 1777. Fennill’s widow is listed as Amey Marks. However, there are no other Marks listed in the probate records. Bute County is a former county located in the state of North Carolina. It was formed on June 10, 1764 from the eastern part of Granville County by the Province of North Carolina General Assembly. In 1779 Bute County was divided into Franklin County and Warren County and ceased to exist (Wikipedia). 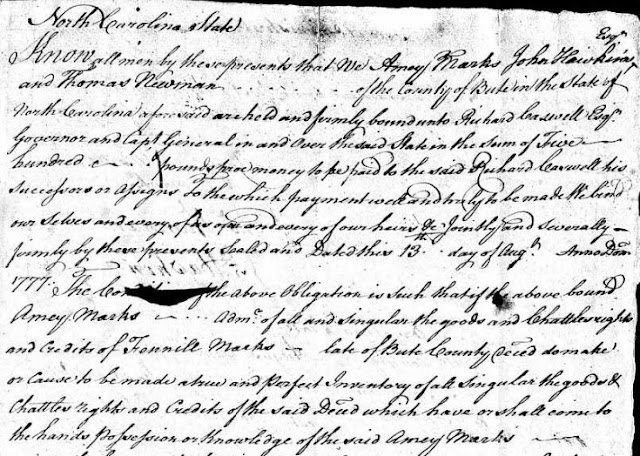 DNA testing has yielded the original results with my Marks line that I was looking for. Finding my fourth great grandparents was the reason I DNA tested. Now that I have succeeded in finding my fourth greats, I am looking to move on to my 5th greats. DNA testing has not been successful in this quest. A DNA cousin volunteered to Y-DNA test for our Marks line, but he has no matches are Y-37 or Y-67. None! In more than a year. Not one hit. Autosomal (at) DNA testing has not yielded much fruit either. I can connect almost all atDNA matches back to Chatham County, North Carolina but then the collective research begins to fall apart.

No one seems to know where the Marks in Chatham County came from. And records are not showing themselves yet. I think a good place to start is finding out what the connection to the McKay family from Bladen County, North Carolina is. I’m working on that. Bladen County does not have a lot of online records, so, I am planning a research trip there and to the North Carolina Archives as soon as time and current conditions will allow.

Another good place to begin is with the Clark family of Chatham County, North Carolina. John Marks, my fourth great grandfather, in 1810, had a dispute with an Alexander Clark and 300 acres of land had been levied to settle what may have been a debt owed. I have been attempting to find this court case, but to no avail. It may be at the state archives, and it is on my list of items to check for. 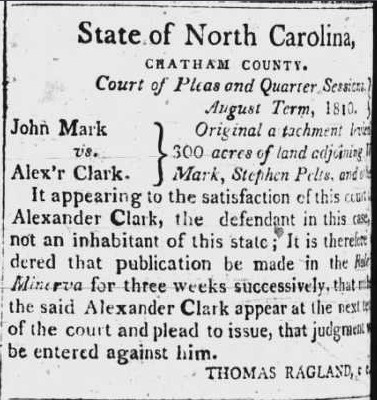 Further research has found that most William Marks and Margaret Salter descendants have a legend passed down about the progenitor of their family, William Marks, an English Revolutionary war soldier. He was wounded in battle and left behind. He started his life in America in Chatham County, North Carolina. Perhaps there is some truth to this and a lone DNA tester from England will someday Y-DNA test and answer the question of the parentage of ‘Daddy’ William Marks.

Until then, there are a lot of other leads to follow up on regarding my Marks research.
Posted by Uwharrie Roots at 3:29 PM