In 1792, the town of Henderson established at the confluence of the Yadkin (Pee Dee) and Uwharrie Rivers as the third seat of Montgomery County, North Carolina. The first county seat being Tinsdale (or Tindalsville) on the west bank of the Yadkin River, which suffered an epidemic of typhoid fever early on. The Montgomery County Heritage books reference other county seats, Blakely, Stokes, and Lawrenceville. Many early county records were lost due to courthouse fires but many people registered records again and copies can be found at the Register of Deeds office in Troy, the fifth and final county seat of Montgomery.

It is in Henderson that Alexander Morgan was born on 18 June 1809. Based on the 1810 Census for Montgomery County, NC, several Morgan males qualify as Alexander’s father, Hardy, Zachariah, Jonathan and Mark. One female, a Selby Morgan, qualifies as possibly a grandmother that raised him.

Not much found on Selby Morgan. Based on the 1810 Census, she lived in Capt Chappell’s district, what is now, I think, the Candor area, was over the age of 45. With Selby lived two males under the age of ten, one female between 10 and 15 years of age and 1 slave. I find no other information on her. I have included her only because she is a candidate according to the Census record.
In Capt Williams district, possibly near what is now Pekin, lives Wil Morgan with no males at all and J. Morgan also with no males. 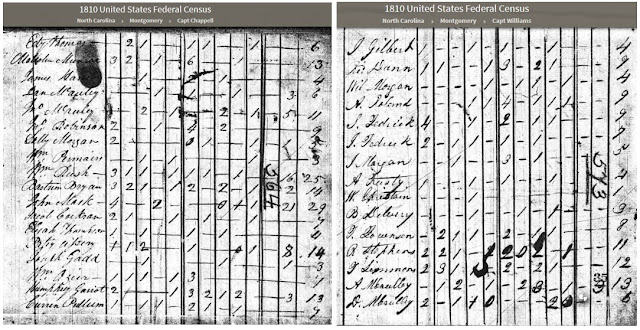 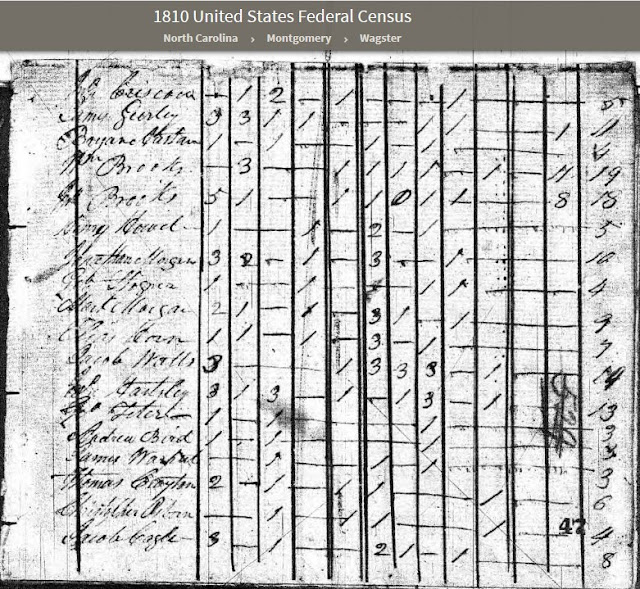 Hardy Morgan first found in 1810 on the Census for Hattom, Montgomery, NC with one male under 10 years and 3 males 16 thru 25. Obviously, one of the males 16 thru 25 is Hardy and the only female, listed as 16 thru 25, is most likely his wife. The other two males are too old to be his children and are possibly some relation to him or his wife. There are other scenarios, of course. Perhaps the other two males are work hands or perhaps the child is his nephew. Hardy looks to have been born around 1789, give or take a few years. 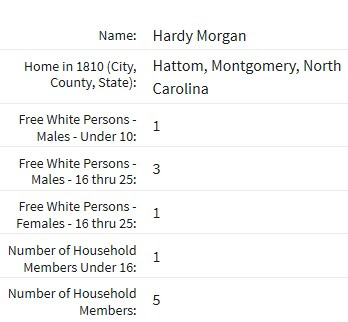 The 1820 census is mostly intact, but six counties have lost census records. Those counties are Currituck, Franklin, Martin, Montgomery, Randolph, and Wake. Montgomery being where Hardy Morgan lived we will have to move on to other sources other than the 1820 Census to discover more about him.

From 3 Mar 1823 until 15 Jul 1836, a Post Office established at Morgan's Store, owned by Hardy Morgan and where, in 1825, someone stole a horse belonging to Hardy Morgan. He ran an ad in the Fayetteville Weekly Observer offering a $25 reward. 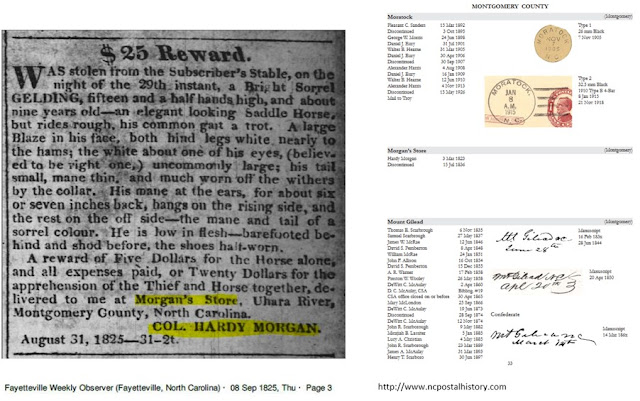 A fellow researcher has provided me clues on where Morgan's Store might have been located. In 1834, the store was on postal route 2166, between Chisholm's Store and Lawrenceville. Another researcher I spoke to says that Simmons Tan Yard, noted in the article, was where Troy now is, Narrowsville was near where Narrows Dam currently is on the Stanly side of the river. Yet another researcher offered that Wind Hill became Eldorado before 1870, the name changed by J.H. Davis postmaster at the time. J.H. Davis was a mineralogist, from New Jersey; he most likely came to Montgomery County because of the gold in the area. 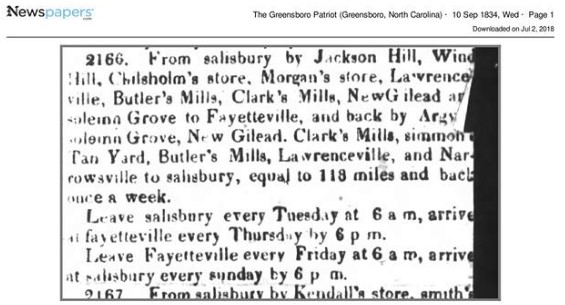 Our collaboration seems to have narrowed down Morgan’s store location to near where the Uwharrie River bridge is today on Hwy 109. Here is what that area looks like today. Other than the bridge, I imagine not too much has changed.

In 1826, Hardy Morgan was on a Committee of Arrangements with several other Montgomery County men who planned that year’s Fourth of July celebrations. 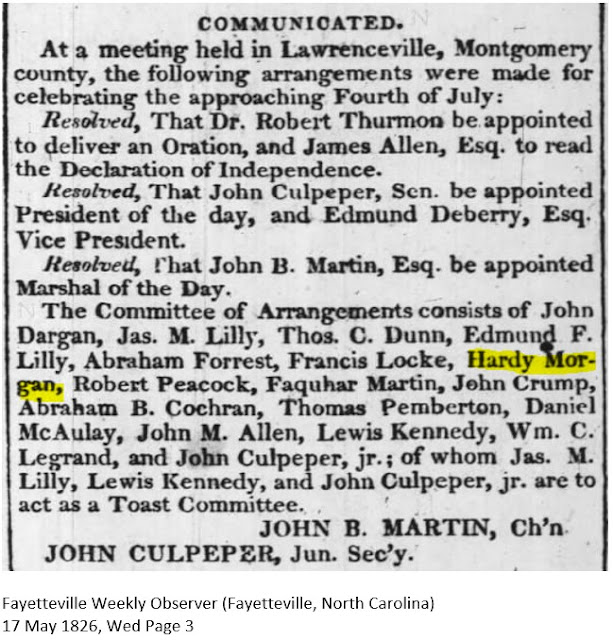 Hardy also served as a Justice of the Peace; also known as a magistrate, for the county. In 1828, “Hardy Morgan took out a warrant against all three (Lewis, Griffin and Blakely) on a charge of counterfeiting” and a trail was conducted against the three where no evidence was found and the case dismissed. Later, an article written (a portion shown below), "in justification of the three magistrates, whose conduct has been so unjustly censured for discharging their duty in dismissing three men, charged with counterfeiting, against whom neither proof nor suspicion of guilt was elicited on their trail." 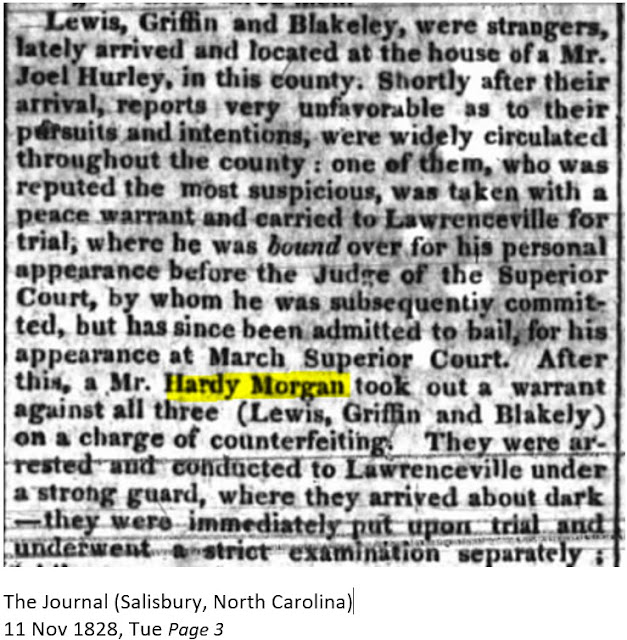 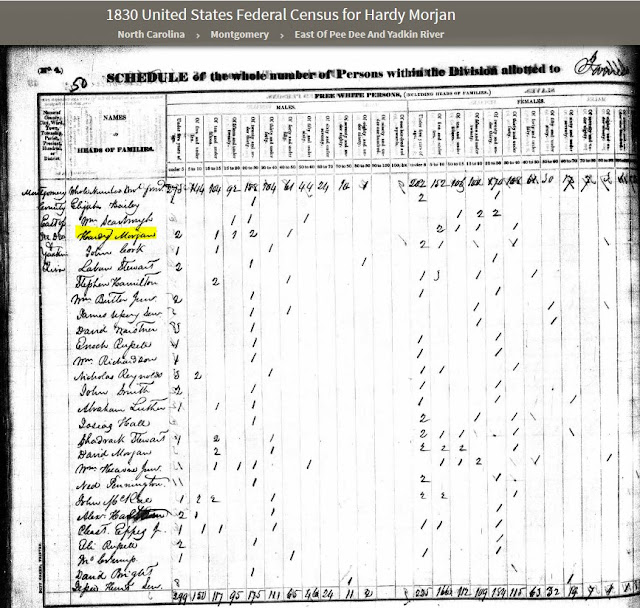 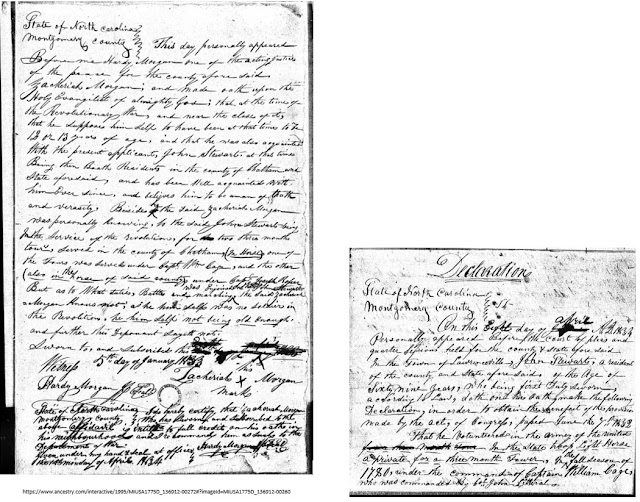 The file includes the names of those who know John Stewart and can attest to his war service and to his character, Charles Morgan Sen, Edward Brewer Sen, Zachariah Morgan, Benjamin Bell Sen, Col Hardy Morgan and the Hon Edmond Deberry. The file also contains a statement from John’s sister, Elizabeth Russell.

In 1838, in The Weekly Standard, Eben Hearn, Sheriff of Montgomery County, publishes notice of a land sale. Land belonging to Alexander Morgan, 100 acres on Uwharrie River, for taxes due for years 1836 and 1837. Right above Alexander’s name is Hardy Morgan, whom I believe is related to Alexander – I just have not come across actual, tangible proof of the relationship. 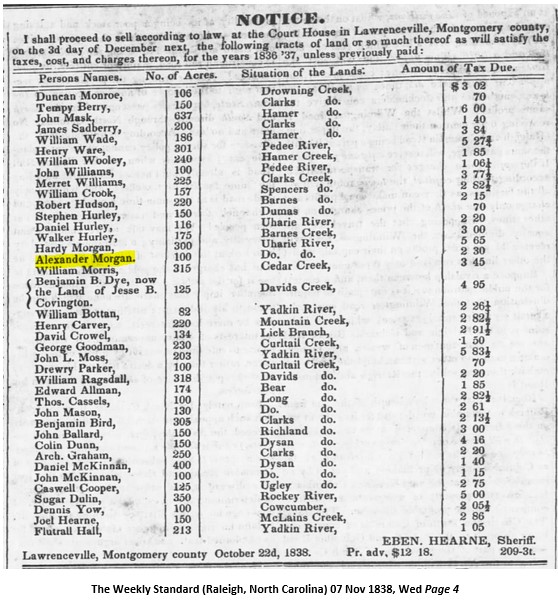 Census year 1840 finds only two Morgan males listed east of the Pee Dee River, Hardy Morgan and Edmund Morgan. Edmund is new to the Census records and lists himself as between 40-50 years old. Where did he come from? In addition, where have all the children of the other Morgan’s from earlier Census records gone? 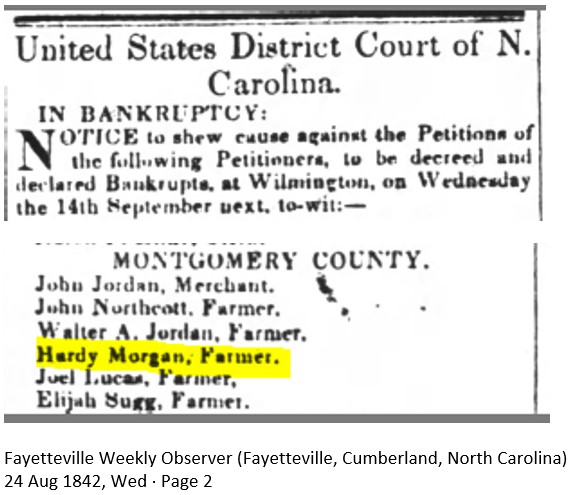 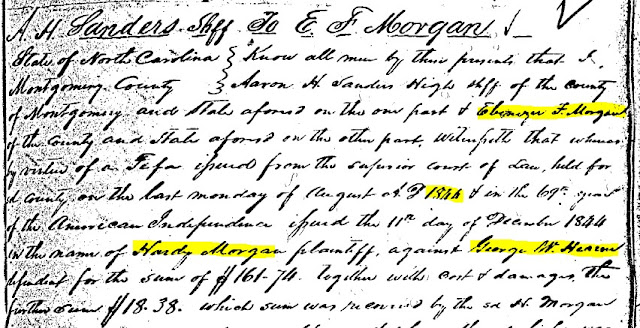 By 1850, the Census for Pontotoc, Mississippi includes Alexander F. Morgan (age 40) and Ebenezer F. Morgan (age 38) in the same household and in dwelling number 1846 is Hardy Morgan with wife Nancy and three of their children also listed is Caroline Beckerdite, age nine, whom is possibly a grandchild to Hardy Morgan.

I found Caroline on the 1860 Census in Mississippi, Marshall Township 5 Range 2 with Colin Beckerdite, age 52, who was born in North Carolina. Did Colin marry a daughter of Hardy Morgan? Is Caroline his daughter? Looking deeper, I found Colin on the 1840 Census in none other than, you guessed it, McNairy County, Tennessee. The same place that John Stewart migrated to in the mid-1830s.

Of even greater interest are my nine Beckerdite DNA matches at Ancestry. All of them leading back to Randolph County, North Carolina and all distant matches. I am looking forward to investigating if these matches connect to Colin Beckerdite and possibly finding a marriage record listing his wife as a Morgan.


At this time, I do not know who Levi Jarvis is but wonder if his wife could have been a Morgan or a Stewart. That investigation continues.

Update: The Jarvis's are the family of Elizabeth Jarvis who married Alexander F. Morgan. 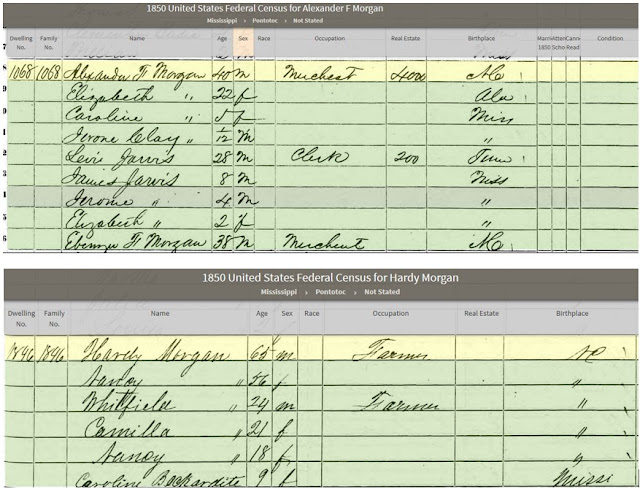 The year 1870 finds Ebenezer and family still in Arkansas, and far from the Uwharrie River that used to be his home. I wonder if he missed it at all. Two more family members have been added to Ebenezer’s family, Harriet and Martha. Between 1870 and 1880 Ebenezer passes on, his family remains in Arkansas with Harriet (Dollie) married to John Weaver with her own daughter, Ethel. 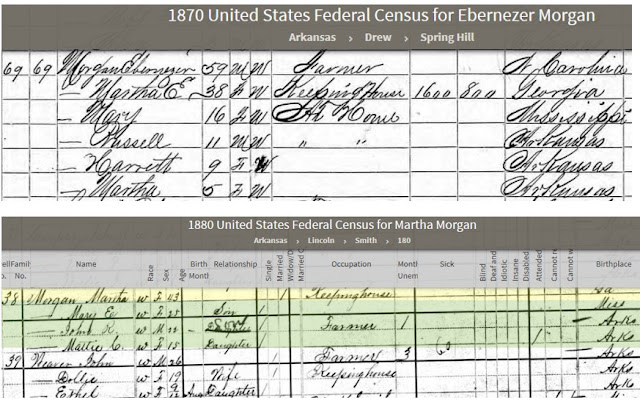 Alexander died from pneumonia on 24 Jan 1860 and is found on the 1860 Mortality Census schedule. His wife and children followed just a few short months later.