11 Apr 1839, Willis Morgan and Bethany Bailey Delamothe entered into a marriage contract of their own making. It seems that Bethany was attempting to protect the dower left to her by her late husband, Henry Delamothe and Willis Morgan must have agreed as it looks like he probably wrote the marriage contract. Bethany signed her name with an X. The contract witnessed by E.F. Morgan and proven in court by the oath of E. Frank Morgan. 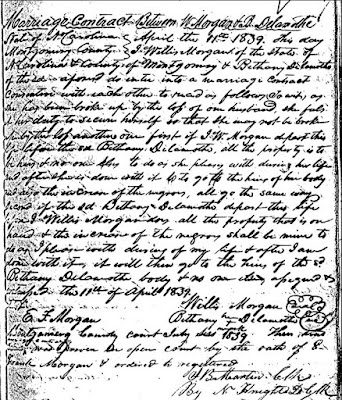 E.F. Morgan is Ebenezer Franklin Morgan and I am curious to know how he and Willis Morgan may be related. While I have found many Morgan’s in Montgomery and surrounding counties, I have yet to find any documentation that ties them all together. They all seemed to have done business together and some found in other states together. However, any tangible evidence to how they all related is only speculation on my part. The research currently available on the internet by other Morgan family members hinges entirely on the will of Charles Morgan of Chatham County, NC. My hope is to find something that either proves (or disproves) that Charles Morgan of Chatham is the common ancestor of my Morgan line.

On the 2nd day of March 1840, E.F. Morgan, of the county of Montgomery, sold to John Hall, of the county of Randolph, for the sum of $725, and lying on the east bank of Barnes Creek, land that included a Grist Mill and a Saw Mill. Two other tracts of land, known to many as the McCulloch tract and Spencer tract, sold to John Hall at this same time.

At the end of the deed the following was added, “the sd E.F. Morgan doth hereby by these presents exempt one acre & a half of the McColloch Tract of land to begin at McColloch’s last corner on Uwharrie River adjoining the lands of sd George Coggin as the same heretofore has been sold to sd Coggin by Hardy Morgan.” The deed witnessed by H. (Hardy) Morgan and A.H. Sanders, proven by oath in open court by A.H. Sanders. That raises the question if E.F. and Hardy Morgan owned this land jointly or if E.F. Morgan had bought the land from Hardy Morgan at some time in the past and somehow they all forgot the one-acre and a half had previously sold to George Coggin until the land sold to John Hall. 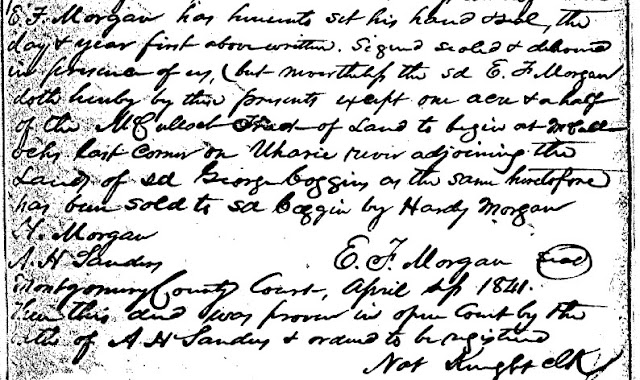 As noted in my previous Blog post, ‘Exploring the Morgan's of Montgomery County, North Carolina part two,’ Hardy Morgan took George Hearne to court in 1842. I had previously found a Newspaper article making publication for six weeks notifying George Hearn to appear at the next Superior Court held at the Court House in Lawrenceville, Montgomery County, NC. Based on my findings at the Register of Deeds office in Montgomery County, I take it that George did not receive the publication. He was long gone.

Ebenezer Hearn must have borrowed $161.74 from Hardy Morgan prior to 1842 and did not repay the money. Perhaps, the money was the remaining balance on the lands that were the undivided interest of Hardy Morgan. Whatever the reason, Hardy Morgan went to court and a fifa issued, a writ of execution after judgment obtained in a legal action for debt or damages. When Ebenezer died in 1842, Hardy Morgan took George Hearn, the son of Ebenezer Hearn, to court for his money. Two years later, in 1844, A.H. Saunders, High Sheriff of Montgomery County, received orders from the court to levy the goods of the judgment debtor.

A.H. Sanders, as ordered by the court, "seized into his hands...four negro slaves belonging to the estate of the sd Ebenezer Hearn dec'd." The slaves were "put up at public sale to the highest bidder for ready money upon the 25th day of February AD 1845 at the court house door in the town of Lawrenceville in sd county, at which time and place the aforesaid E.F. Morgan became the last and highest bidder at the sum of twenty five dollars..."

On the 6th day of February 1837, Hardy Morgan sold to Ebenezer Franklin Morgan, for $120, on Barnes Creek, 120 acres previously granted by the state of NC to Hardy Morgan in the year 1829. 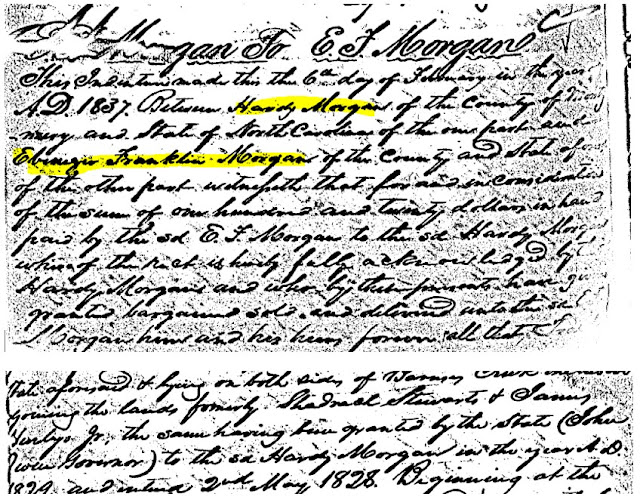 There were many other deeds found that I could list here. However, none of the deeds I found included any hint of what the relationship was between E.F. Morgan and Hardy Morgan or any other Morgan.

Posted by Uwharrie Roots at 7:17 PM