The very painful process of sorting out my Morgan’s continues. It makes my Marks’ line seem easy in comparison. When I decided to take on my Morgan line, I asked a male cousin to Y-DNA test and he agreed. While patiently awaiting the results, I weeded through the existing records as well as the research found on the internet, wrote, and posted the three part Morgan series. The DNA results are finally in and we have matched another Morgan line from Montgomery County.

For those who are new to DNA testing let me say first that DNA testing does not magically produce a family tree. The results are a list of people who share DNA with the tester. Results compare against others who have also DNA tested. Secondly, the process involved in figuring out how our matches relate to us and where they fit into our family tree, is our responsibility to learn. There is a plethora of information on the internet in written and video form on DNA testing. A good place to begin is with Kitty Cooper’s Blog: http://blog.kittycooper.com/2013/11/what-to-do-with-your-dna-test/

My Morgan story begins with a wedding. But not one you would imagine. Bethany Bailey, age 18, daughter of John and Elizabeth Dennis Bailey, in 1826, married Henry Delamothe, aged 70 years, in Montgomery County. The legend, handed down to generations and most of it probably true based on the accounts left in the journals of Dr. Francis J. Kron, nephew-in-law to Henry. Henry enticed his niece, Mary Kron and her husband, Dr. Francis Kron, to come to America with thoughts that they would become his heirs, as he did not have any of his own. Something happened to cause a rift between Henry and Dr. Kron right after their arrival in America because Henry decided he was going to marry and produce an heir of his own. On August 21, 1826, Henry and Bethany married. 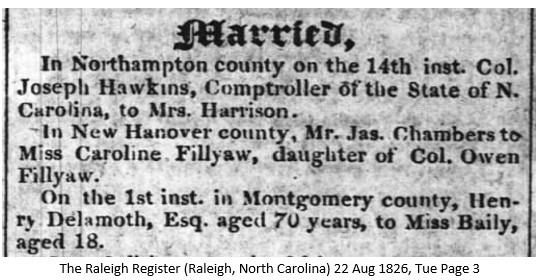 Henry Delamothe, originally from France, migrated to America in the early 1800s in hopes of finding wealth in the North Carolina gold rush. Henry quickly obtained a large tract of land in Montgomery County, to include the old county seat of Henderson.

By 1834, Henry, married eight years, still had no heir. Legend says that he concocted a scheme to enlist the help of a young man named Willis Morgan to produce an heir for him. According to Kron’s journal entry dated 1 Dec 1835, there may be some truth to the legend. In 1835, Bethany gave birth to a girl, named Nancy. A short time later, and apparently not part of the plan, Bethany gave birth to another girl and named her Elizabeth.

Henry Delamothe signed his will in 6 Sep 1838 providing Bethany her 1/3 dower and “whatever else the law may require.” He left his daughter’s and any subsequent heirs 50 cents each.


Henry Delamothe passed away a short time later. He must have left a mark on Montgomery County as they were still talking about him in 1879. According to an article dated 3 Jul 1879, the grave of Henry Delamothe could still be seen, enclosed by a neat, stone, wall.

In Apr 1839, Willis Morgan and Bethany Delamothe entered into a marriage contract. It seems that Bethany was attempting to protect her dower left to her by her late husband and Willis must have agreed as it looks like he probably wrote the marriage contract. Bethany signed her name with an X.


The Morgan line that my cousin Y-DNA matches is the Willis Morgan and Bethany Delamothe line. It came as no big surprise to find that many of the Morgan’s in the same county all connected. It makes sense that they were all one family.

Posted by Uwharrie Roots at 6:08 PM