Expanding the search for the Morgan’s part three

There is much information found on the many Morgan’s in the Census’ of Montgomery County and the surrounding counties; including Chatham County, however, other than family stories, legends and a lot of assumptions, I do not seem able to tie the families together through documentation. I studied the Charles Morgan family from Chatham County, as there was a tremendous research effort across the internet to tie this family to the Montgomery County Morgan’s; other than some of the first names being the same, I am not able to definitively say these are the same families. There is just not enough of a paper trail.

Charles Morgan, Chatham County, who left a will, had six sons and two daughters listed in his will. He leaves the house, land and mill equally divided between all eight children. He leaves a bed and furniture to his granddaughter, Geane Stewart. His sons, Charles Jr and Joseph, appointed executors and the will witnessed by John Stewart and James Smith; dated 12 Nov 1787. The will probated in February session 1788. No wife mentioned. 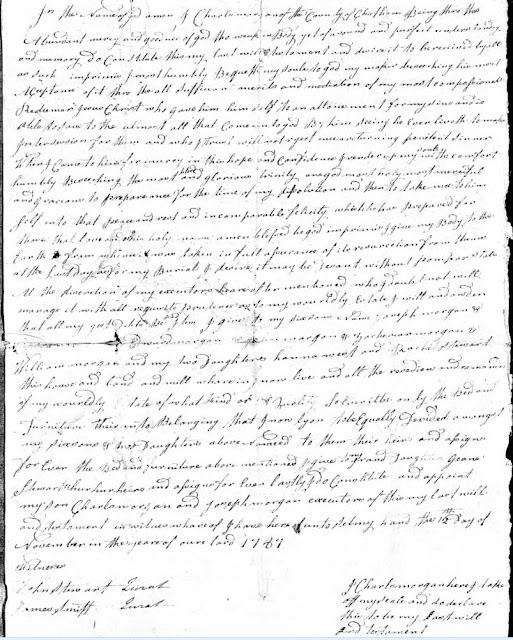 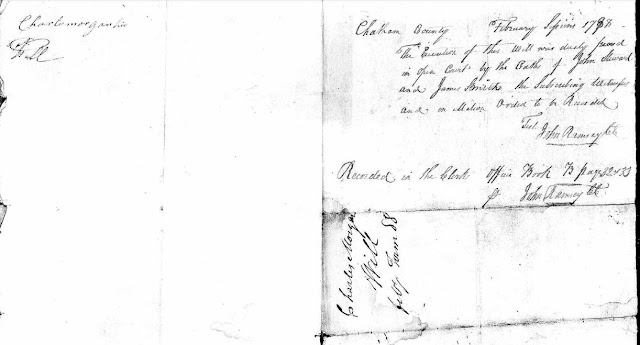 Several names here show up in Montgomery County, Joseph (my own ancestor), Charles, John, Zachariah and William are names found in Montgomery County. Further searching in Chatham found a will for a Joseph Morgan, probated 1806. It is likely that this Joseph is the son of Charles, but it is only speculation, and not absolute proof. This Joseph looks to have died young. His wife lived to the year 1843 and he listed at least one underage child in his will.

Those mentioned in Joseph’s will are John Morgan, Rachel Richardson, Polly Brewer, son in law Abel Brewer, and Jemimah Morgan

Twice in the will, Joseph specifically states that he wishes his children to live peaceably on that part of the land whereon they currently live and to not remove or tear down the dividing line (a fence, an orchard and a field) between them and his ‘present wife’ and George Dismuke’s line. Joseph lists his wife last in the will, and names her as Ferreby Morgan. George Dismuke, John Morgan and Ferreby Morgan listed as Executors and Executrix of his will. The will, dated 3 Dec 1805 is probated 1806. 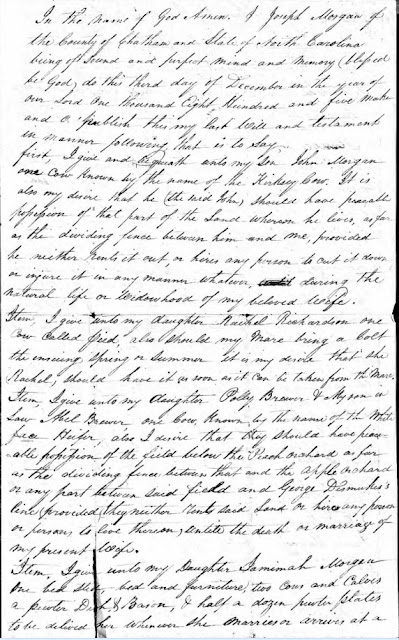 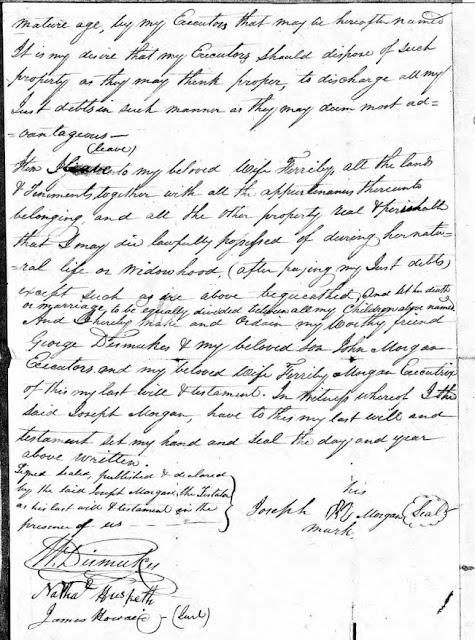 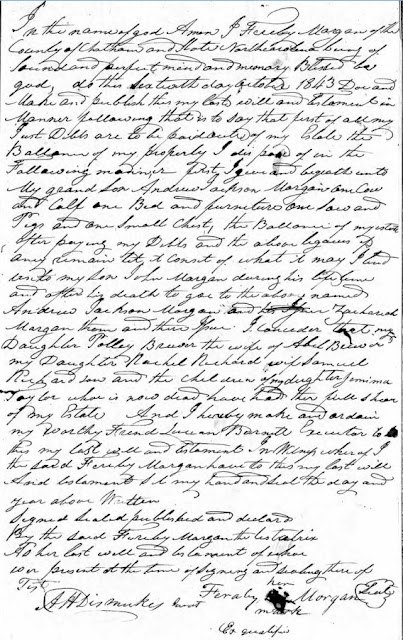 It is obvious from the two wills that Joseph and Ferreby Morgan were married and the parents of the named children. Joseph looks to have died early and Ferreby never remarried. Zachariah is not mentioned in Joseph’s will and may be the son of Andrew Jackson Morgan. Although Ferreby does not mention Zachariah with any title, she has told us that Zachariah is her great grandson. She says about the remaining part of her estate, "I lend unto my son John Morgan during his life time and after his death to go to the above named Andrew Jackson Morgan and his issue (crossed out) Zachariah Morgan them and their issue."

On Family Search, I found the guardian papers for the sons of a William Morgan, Chatham County, Alston Morgan and Nathaniel Morgan, dated 1809. It is possible that William is the brother of Joseph and son of Charles Morgan. There obviously is a close relationship to the Dismuke’s family and I wonder if Ferreby’s maiden name might be Dismuke. Perhaps George is her brother or uncle. George died in 1827 and she is not mentioned in his will. 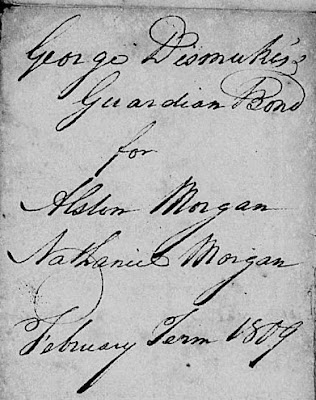 I visited Orange County to see if I could connect the Morgan’s there to the Chatham County Morgan’s. Again, aside from some of the same first names repeated, I found no paper trail that definitively connects these Morgan’s together. The closet I came to a connection is with John Morgan, Orange, 1807. Lands in both Orange and Chatham are specifically stated and I feel safe in assuming that this John had a connection to both Orange and Chatham Counties.

On to the Tax Lists
I found William Morgan and Gowing Morgan on the tax list for Montgomery County between the years 1779 and 1780. I found a William Morgan in Anson County with a land grant from 1769. This possibly is the same William Morgan. This particular Morgan line seems to have been in the area of what is now the Uwharrie National Forest for a very long time. 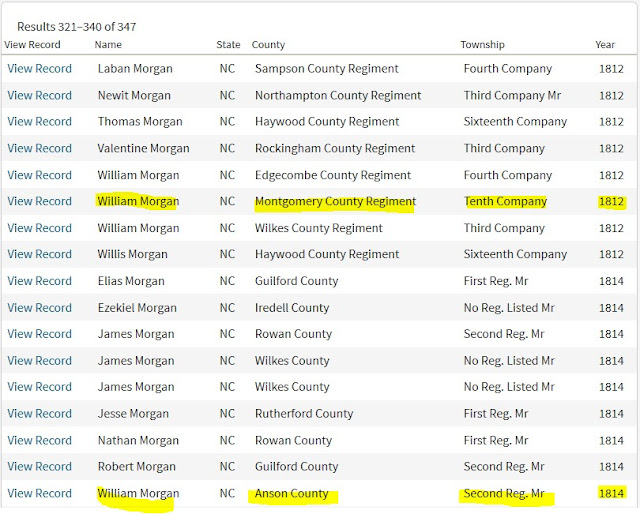