Nancy Morgan is not the daughter of Ebenezer Hearne

Family trees and genealogies abound with erroneous information, and that concerns me, especially if accurate information is so readily available. I have reviewed many trees on and offline while researching the Morgan’s of Montgomery County that state Ebenezer Hearne and Dovey Walker are the parents of Nancy Hearne, wife of Hardy Morgan. However, not one of the trees I reviewed had any supporting documentation to prove this claim. The only supporting evidence, that incessant little icon, “Ancestry Family Trees” copied endlessly in hundreds of trees that leads one in circles of madness to one endless tree after another with no documentation.

In one of my late night research adventures, bleary eyed and sleepy, I came across The Arkansas Family Historian, a quarterly newsletter published by the Arkansas Genealogical Society. In Volume 6, No. 1, Jan/Feb/Mar 1968, starting on page 5, in an article titled "THE MORGANS OF LINCOLN COUNTY, ARKANSAS" and written by Mrs. Thomas H. Bowles, I uncovered, what MAY be, the origins of two pieces of information that have never been fully proven, yet have been copied for years until it has become ‘truth.’

From the newsletter: “Hardy Morgan was born 1785 in North Carolina; his parents are unknown to me, but in the 1810 census of Montgomery Co., N. C., his household consisted of his wife, age 16, baby son, and two males over 16. Nearby lived Charles Morgan, old enough to have been his father. Hardy married in 1808, Nancy Elizabeth Hearne, age 14, daughter of Ebenezer Hearne and wife, Dovey Walker. Ebenezer was a Revolutionary War Soldier, private in the N. C. Line, and drew a pension for his service, see "Roster of Soldiers of the Revolutionary War from North Carolina", published in 1952 by the North Carolina D.A.R. On page 446, Ebenezer Hearne, private, received $120, March 4, 1831, age 73; he was living in 1835, see page 578. Hardy and Nancy were parents of fourteen children by family tradition, but I have been able to prove only ten of them from records.” 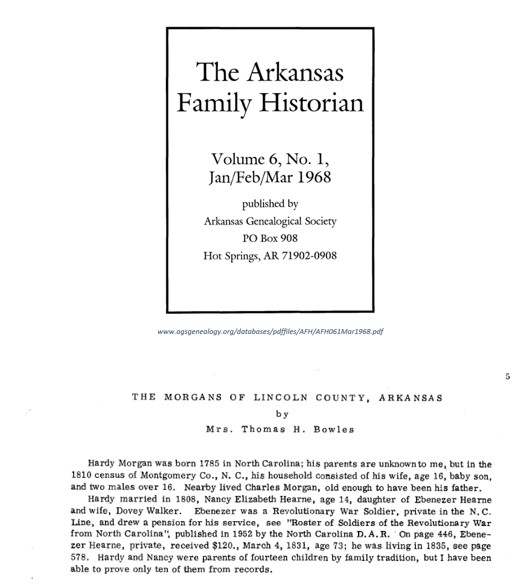 For 51 years, this information has been copied repeatedly across multiple generations until, finally, it has embedded itself in nearly every public Hardy Morgan tree at Ancestry and across many more message boards. The issue I have with this, is that there is no supporting documentation for the claim. Mrs. Bowles only implies that Charles Morgan is old enough to be the father of Hardy, yet never claims that he is. Mrs. Bowles does claim that Ebenezer Hearne and Dovey Walker are the parents of Nancy Hearne Morgan – yet there is no supporting evidence to this claim. In fact, to the contrary, the historical record shows something entirely different.

I have touched on Ebenezer Hearne briefly before, in my Blog, ‘Exploring the Morgan's of Montgomery County, North Carolina part two.’ Undoubtedly, the Morgan and Hearne families are interconnected in some way and I have no doubt that Nancy Hearne who married Hardy Morgan is in some way related to Ebenezer Hearne, but she is not his daughter. 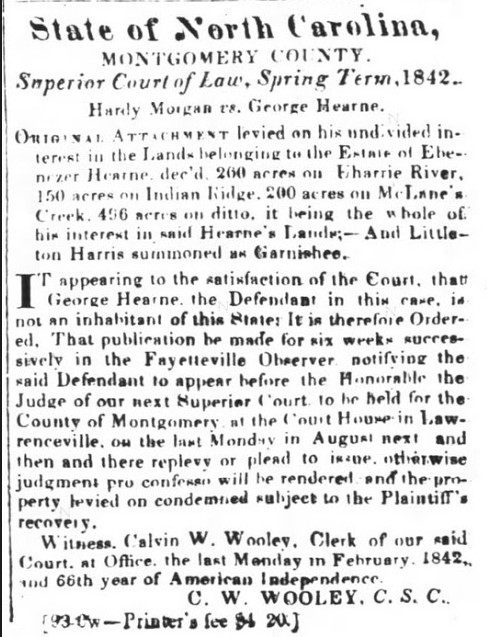 Ebenezer F. Morgan certainly had an undivided interest in the land of Ebenezer Hearne because two of the sons of Ebenezer Hearne sold their interest in their father’s land to Ebenezer Morgan. George W. Hearne sold his interest in said land under an execution by S. L. Christian sheriff of said county and E. F. Morgan became the purchaser when the said sheriff executed to the said Morgan a deed of bargain & sale for said interest. It was further shown that the interest of Rowland Harris in said land was sold under an execution by S. L. Christian and E. F. Morgan became the purchaser of that interest as well, and said sheriff executed to E. F. Morgan a deed of bargain & sale of said interest. Further...Ebenezer Morgan petitioned the court of Montgomery County and asked for an order and decree that the share of the purchase money claimed by George Hearne be paid to himself and that the share of said money which Rowland Harris & wife would have been entitled be paid over to him as well...the total sum of $61.00 as each child could claim $30.50 from the sale of the Hearne lands.

We need go no further than the estate file of Ebenezer Hearne to discover who his daughter, Nancy married. The estate file names all the heirs of Ebenezer Hearne and lists his sons-in-law as well. Disey, wife of George Hearne (later corrected to the wife of Thomas Hearne), Polly, wife of Gabriel Russell, Lenora, wife of William Morgan, (later corrected to the wife of Thomas Ingram),

Elisabeth, wife of Rowland Harris, Nancy, wife of Clayton Steed, Stephen Hearne, George W. Hearne, and Joel Hearne, all of full age show that they are the children and only heirs of Eben Hearne, deceased.

The above document also adds the heirs at law of Dovey Partin, the daughter of Ebenezer and Dovey Hearne who married a Partin and moved to Wilson County, Tennessee, as parties to the petition. 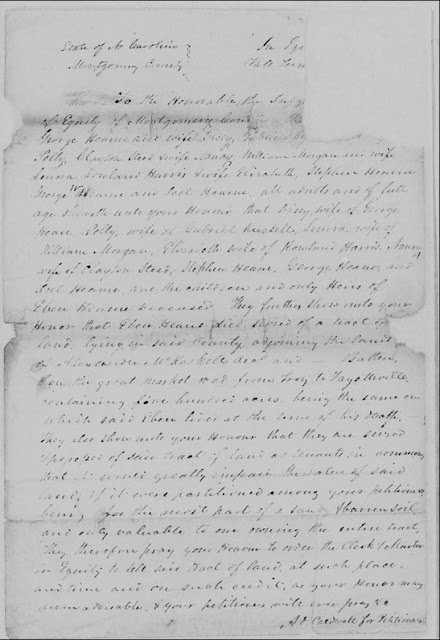 On the 16th of May 1847, Dovey Hearne, the widow of Ebenezer Hearne, departed this life. Her estate file, dated 19th of May 1847, lists Clayton Steed as one of the bondsmen in the Administration of her estate, along with others, Gabriel Russell, William Ingram, W. Lassiter. A notice in the Carolina Watchman from 4 Jun 1847, confirms the death of Dovey Hearne, wife of the late Ebenezer Hearne. 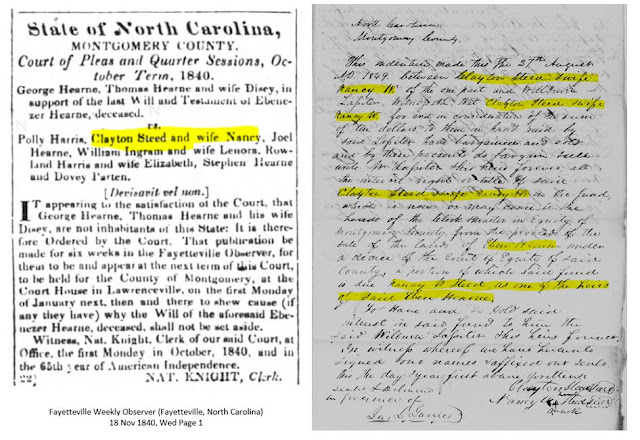 Clayton and Nancy Hearne Steed lived out their married lives in Randolph County and can be found on the 1850 Census, the first Census that showed all family members names, and where in Oct 1854, Clayton Steed departed this life. Nancy lived on through the 1860 Census and remained in Randolph County close to her children.

In Nov 1854, Nancy petitions the Court of Randolph County for her dower from the 494 acres of land that her husband, Clayton Steed, owned on the Uwharrie River in Randolph County adjoining the lands of Harman Andrews, John Russell & others. 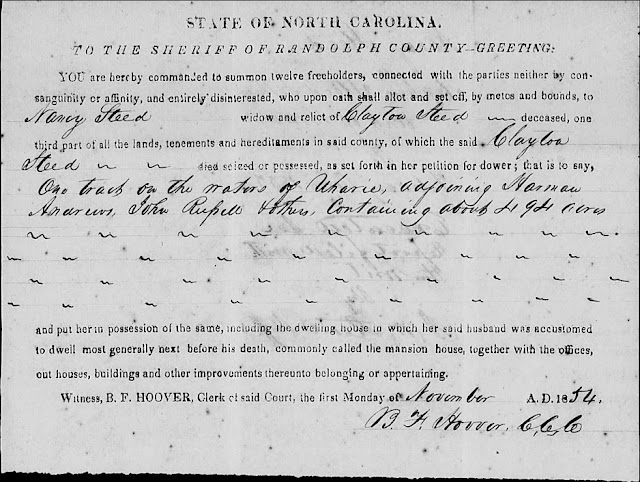 1870 finds an 82 year old Nancy still living in Randolph County with her children living close by. Sabrina, listed as a housekeeper, is the daughter of Clayton and Nancy Hearne Steed. Sabrina is found on the 1880 Census living with her sister, Elizabeth Steed Lassiter, in Randolph County and is listed as Assistant House Keeper. Sabrina died 17 Oct 1886 and is buried at New Hope United Methodist Church Cemetery Randolph County, North Carolina close to her parents.

Found in the estate record of Clayton Steed, are a list of his children, with wife Nancy and some of their grandchildren.

Nancy Hearne Steed died on 5 May 1872, her estate Administered by her son, Burrell W. Steed. Nancy is buried next to her husband at New Hope United Methodist Church Cemetery Randolph County, North Carolina.

Posted by Uwharrie Roots at 9:42 PM