In the Montgomery County Heritage Book Vol. 2, article 337 and Book 3, article 823, I learned of John ‘Bushyhead’ Morris, born about 1805, not much seems to be known of his first wife, Lucy. At least nine children were born to the first marriage, Mary, Matilda, Elizabeth, Green, John, William, Nancy, Noah, James. His second marriage was to Louisa Adeline McLendon, twenty years younger than he. They had six children, Wesley, Presley, Daniel, Fannie, Martha, and Hansel. John ‘Bushyhead’ may be the son of Thomas Morris noted above.

In the Montgomery County Heritage Book Vol. 2, article 339, is found John Jacky Morris, my third great grandfather. The article quotes Dr. Francis J Kron’s medical journal, “My first call was this morning at John Morris’ where I found poor kind people, but no money.” John Jacky, according to Census records, was a miner and worked the gold mines in the Uwharrie area. This family lived near Dusty level on Cedar Creek. John’s wife is Amelia (also seen as Milly) and they had 11 children, William, George, Eliza, John, Granderson, Thomas, Berry, Susan, Tempy, Diza, Caroline.

There looks to be but one Morris listed, at least only one John Morris that can be confirmed based on the legibility of the document, on the 1790 Census for Montgomery County, North Carolina, a John Morris who is not married and has no children. He is over the age of 16 years. Since the 1790 Census was alphabetized, I am not able to determine who John’s neighbors are, so I am not able to use other records that would help me understand in what area of the county John lived. I do know this is not my John Jacky because in 1790, he would have been only a toddler. Page 412 of the Census record is so faded that it is not readable. I can determine there are Morris’ listed on the faded page, but again, the page is so faded that it cannot be used as genealogical proof – at least for my standards. The other Census pages had no listing for a Morris. 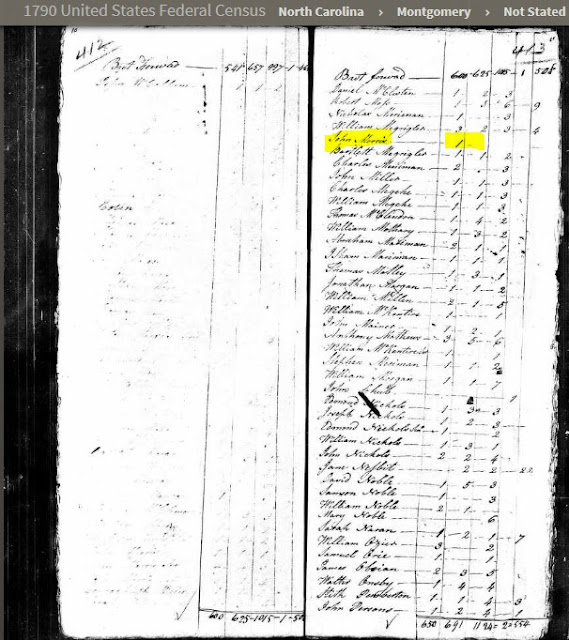 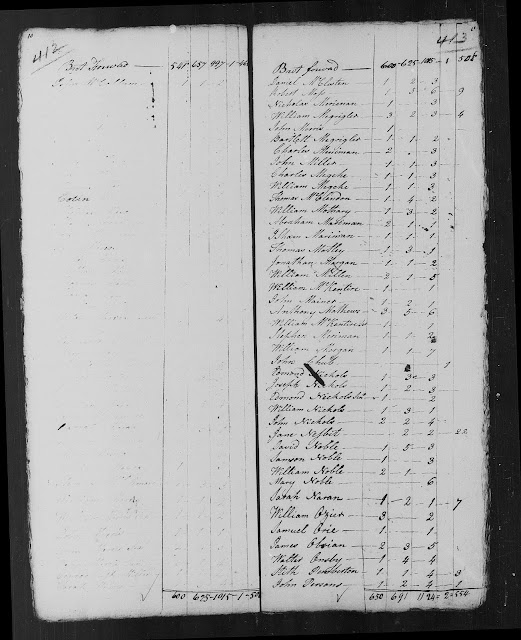 There obviously was more than one Morris family in Montgomery County in 1790 as records other than the Census prove this. On the above pages from Ancestry and Family Search, I can make out the Morris in several entries, but the document just has not withstood the test of time and is too faded to use as genealogical proof. After playing around with the contrast of the Family Search document, I was able to distort the image enough to see some of the Morris names. 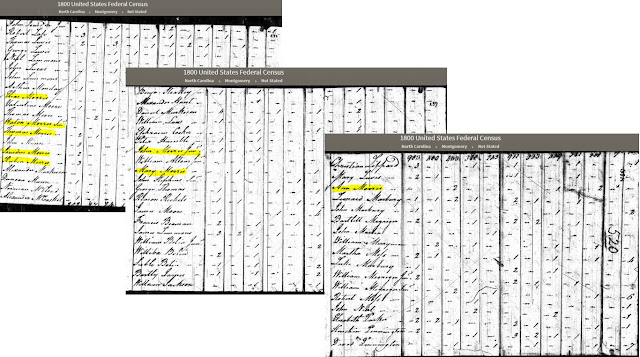 Thomas Morris is found in Capt. Harris’ District, R. Morris and J. Morris are found living next door to one another in Capt. Williams District, and Elias Morris is living in Hattom. Haton, Jourden, Mary and Ann have disappeared from the Census record, as have the family members that were listed living with them. 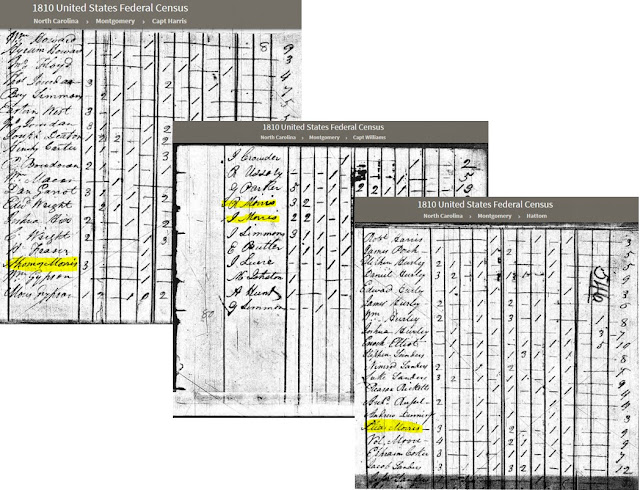 The 1820 Census for Montgomery was destroyed or lost, so I am not able to check that Census for the Morris families. 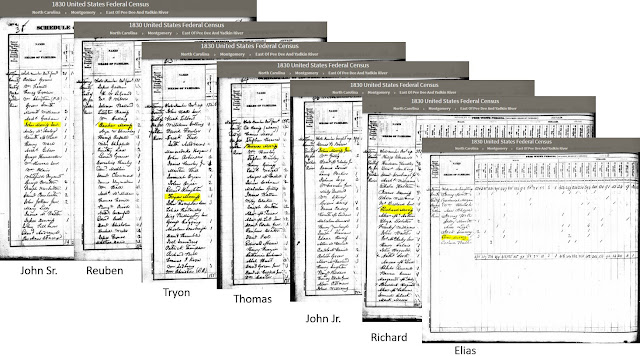 In a district not named lives a Will Morris and one Etheldred Morris. John Morris lives on the west side of Pee Dee River. 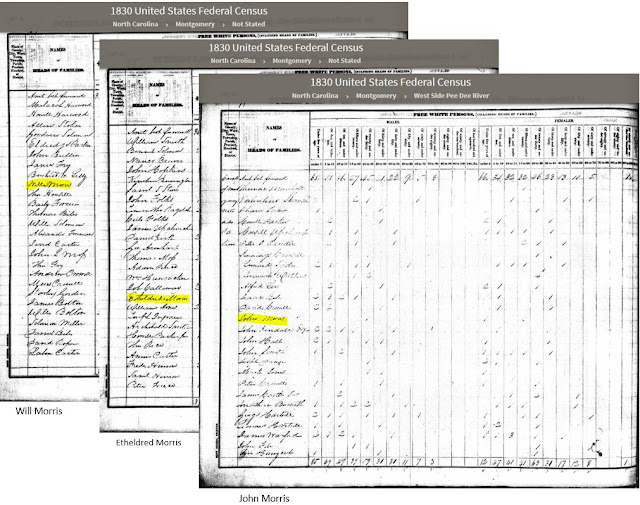 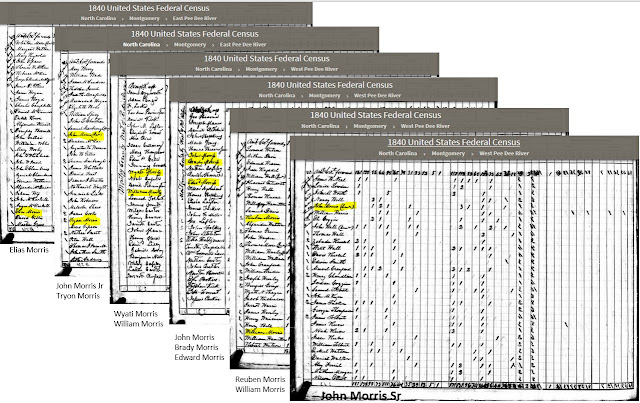 The year 1850 and forward is where we can find the most about our ancestors. It was this year where every family member is named and a year of birth and place of birth given. You can imagine that most genealogist do not have much trouble finding ancestors from 1850 forward, although there are those ancestors that no amount of searching seems to find!

In 1850, my third great grandfather, John, age 70, is found in Montgomery County, North Carolina living with his wife, Amelia (60), and daughters, Tempy (19), Disa (18) and Caroline (15). John claims he was born in Virginia, his age making his year of birth about 1780. Amelia also claims she was born in Virginia, 1790. Neither John nor Amelia can read. The girls are listed as being born in North Carolina. Since the oldest child listed here is 19, I have a clue that John and Amelia left Virginia, arriving in North Carolina, prior to 1831, when Tempy was born. John is working as a miner to support his family.

According to a family member, she was able to retrieve the names of John’s children from a family Bible years ago. All but two of the children were listed in the family Bible. Based on that record, I know John and Amelia had the following children:

William b. 1813 in (according to Census records) North Carolina, which means that John and Amelia were in North Carolina prior to 1813 when William was born. He married Margaret Lewis and they had children, John (called Stutt), Nancy, William, George. William died in 1892.

John Jr b. 1819 in North Carolina. He married Martha Farrell and they had a daughter, Elizabeth. John died in 1850.

Grandison b. 1823 in North Carolina. He married first Malsey Williams, their children: Parsons, Martha, Elizabeth, Ananias, Grandison Jr. Grandison married second, Eliza Williams, they had no children. He died in 1902.

Berry b. 1827 in North Carolina, he married Sarah Williams. They had the following children: Liza, Mary, Jesse, Rebecca, Granderson, Isarris, and Ward.

George b. 1827 in North Carolina, married first, Elizabeth Williams. Their children are Elizabeth, John, Francis, Milla, George Jr, and Julia. In 1895, George married second, Louisa Smith. They had no children.

Susan b. 1827 in North Carolina. She married Samuel Morgan and together they had Albert, John, James, Joseph, William, Lenora, Kenneth, and Samuel. Susan died in 1907. Read more about Susan and Samuel at https://uwharrieroots.blogspot.com/2019/05/susan-morris-wife-of-samuel-morgan.html

Temperance (Tempy) b. 1830 in North Carolina, she married Jacob Sanders and they had Emsley, Jacob, Ann, and Sarah. Tempy died in 1911.

The last Census John and Amelia are on was enumerated 27 Jul 1860. They lived in Beans, Montgomery County, North Carolina. Eliza, their daughter, who had married Pinkney Shaw a year or two earlier, is found at the home of her parents. Pinkney, Eliza and their son, John, were enumerated on 6 Aug 1860. Joseph Morgan, the son of daughter, Susan, married Samuel Morgan, is also visiting. Perhaps Eliza and Joseph went together as his parents were neighbors to Pinkney and Eliza. 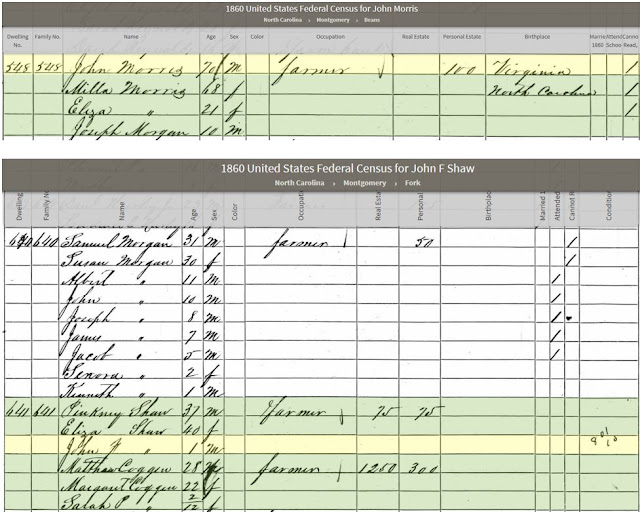