William Morris, oldest child of John ‘Jacky’ and Amelia Morris (her maiden name is unknown), was, according to his grave stone, born in 1813. There is some speculation on whether William was born in North Carolina or Virginia. According to the death certificates of his children, John and Nancy, he was born in Montgomery County, North Carolina. The person who reported the death of William Frank Morris did not know who his parents were, nor where they were born. George Washington Morris lived to be 102 years old, but the person who reported his death gave his father as John T, however, that would George’s older brother and not his father. By the time George died in 1969, it was no longer required to report the parent’s place of birth. 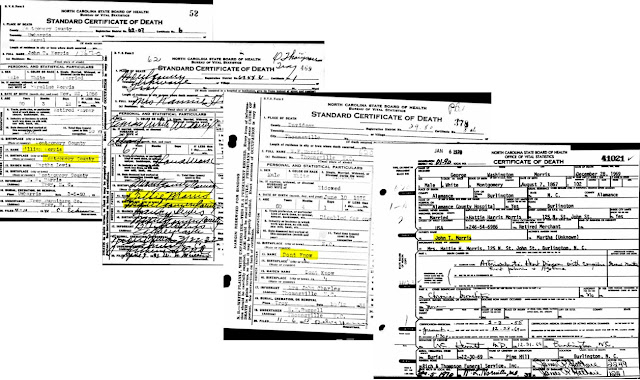 The first Census that can be confirmed for William Morris is 1830. At age 17, he is living with his parents, John and Amelia, in Montgomery County, North Carolina, East of Pee Dee and Yadkin River. Based on the listed neighbors who had land grants between 1825 and 1835, the area where William lived looks to be just north of current day Mount Gilead, perhaps along Clark’s Creek and Rocky Creek area. This fits nicely with my family stories that John Jacky, the father of William Morris, lived near Dusty Level. I imagine, like a lot of families back then, my Morris family probably moved around the area of Uwharrie in search of work.

In 1840, William, now age 27, is living East of the River. He looks to be sharing a residence with another male about the same age as himself. It is possible that the other male is his brother, George, since he is missing from John Jacky’s household in 1840 and I am not able to find him on any other Census. The brothers live between Henry Bell and William Hamilton, who lived on the waters of Barnes Creek in 1840. 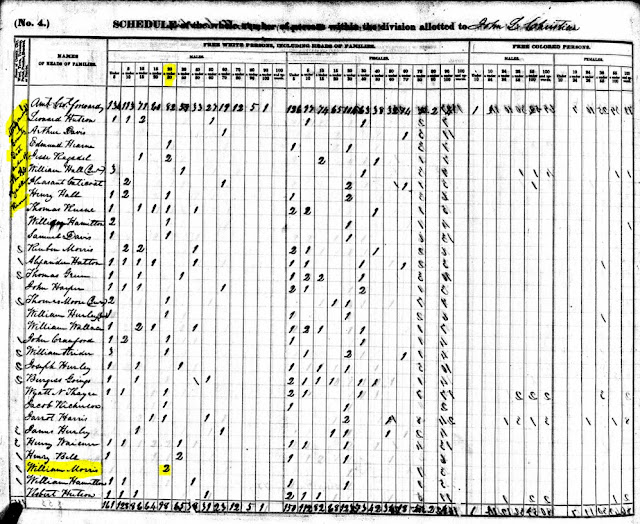 By 1850, William’s brother, George, has married and moved on with his own family. William, still a bachelor, in his mid-thirties, is living with his sister, Susan and her husband, Samuel Morgan. In 1847, William signed as bondsman for Susan and Samuel’s marriage.

In 1858, William met and married Margaret Ann Lewis, called Martha. The bond, taken out in Montgomery County, North Carolina, and dated 4 Mar 1858, bondsman, William’s soon to be brother-in-law, Pinkney Shaw, who, a short time later, would marry William’s sister, Eliza. I find it interesting that both William and Pinkney can sign their names, rather than signing with the usual X mark that I sometimes see. The Morris family were poor farmers and miners and I wonder where William might have learned to write his name. 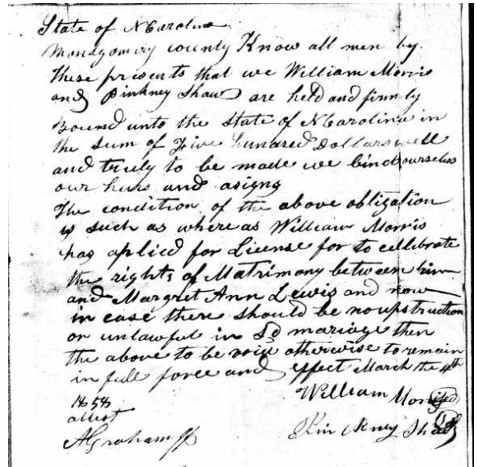 1880 shows William as a widower, Margaret having died between the 1870 and 1880 Census years. Nancy (19), William (14) and George (12) are still living at home. William claims on this Census that he was born in Virginia and that both his parents, John and Amelia, were also born in Virginia. William also claims he is 60 years of age, but not so, he was born about 1813, thus making his age 67.

John Morris (1859-1940), oldest child of William and Margaret Lewis Morris, married Caroline Hall on 1 Jan 1881. Caroline is the daughter of Richard and Leah Hall. He is not listed on the 1880 Census with his father and siblings, nor can I find him listed elsewhere. John and Caroline had the following children:

Nancy Morris (1862-1932) married John Hall (1862-1897), son of Richard and Leah Hall, and brother of Caroline Hall, wife of Nancy’s brother, John Morris, thus making all children born to each of these marriages double first cousins. The children of Nancy and John are:

To my knowledge, George Washington was the last child born to William and Margaret Lewis Morris. George, thus far, has provided more clues on my Morris ancestors than anyone I’ve yet to come across and probably deserves a blog post all his own. George was born in 7 Aug 1867 and died the same year I was born, 28 Dec 1969.

In a Newspaper clipping printed in The Daily Times-News (Burlington, North Carolina) 08 Aug 1967, Tue Page 6, a story was recorded at a 100th birthday party held for George; he entertained with stories of his Morris ancestors, telling how they came from England, settled in Virginia, and then moved down into Montgomery County, North Carolina in 1805. 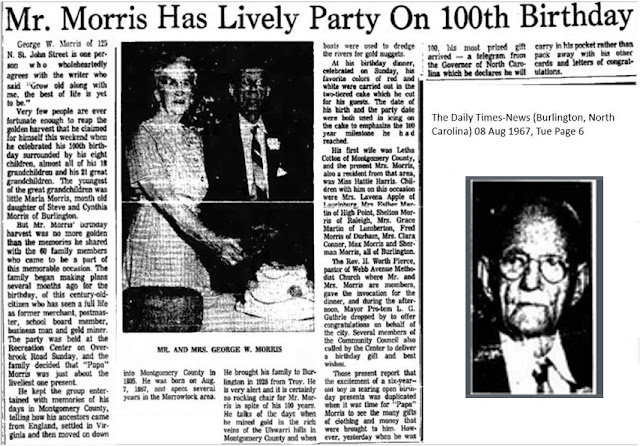 William Morris died 24 Jan 1892 at the age of 79 years. He is buried in the Morris Cemetery, Montgomery County, North Carolina. I have not found where his wife, Margaret, is buried. 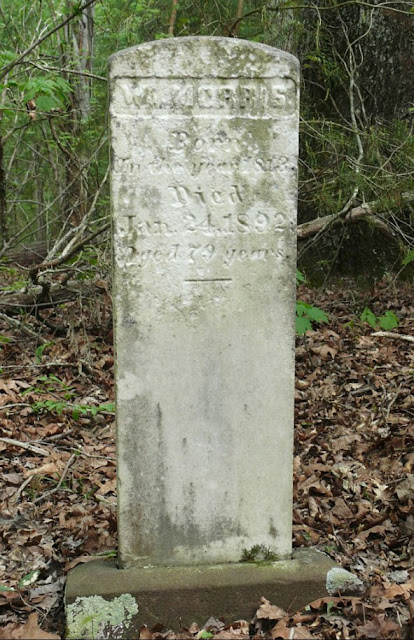 Posted by Uwharrie Roots at 5:30 PM