George Washington Morris, called Wattie; sometimes seen as Watty, was born in Sep 1817, most likely in the Uwharrie area of Montgomery County, North Carolina. He is my third great-uncle. I think it is obvious that he carries the name of the first president of the United States of America, George Washington. George’s father, my third great grandfather, John Jacky Morris, ironically, has the same name as President George Washington’s step son, John, called Jacky.

The first Census I can confirm for George is 1830. He is listed in the home of his father, John Morriss Senior, living east of the Pee Dee and Yadkin River, as a male 15 thru 19 or a male 10 thru 14. Either way, there is a male missing from this family or the Census taker listed an additional male that did not exist. Neighbors to John Morris Sr in 1830 were the Williams’, Graham’s, McAuley’s, and McRae’s.

In 1840, George and his older brother William have flown the roost and are found sharing a residence between neighbors Henry Bell and William Hamilton, who lived on the waters of Barnes Creek in the Uwharrie area. William’s wife was Mary Polly Morgan, her father, William Morgan died in the War of 1812. Two of my third great aunts, Julia Marks and Cyrona Marks, sisters, would go on to marry brothers, Joseph and Lee Thomas Hamilton, sons of William and Mary Morgan Hamilton. 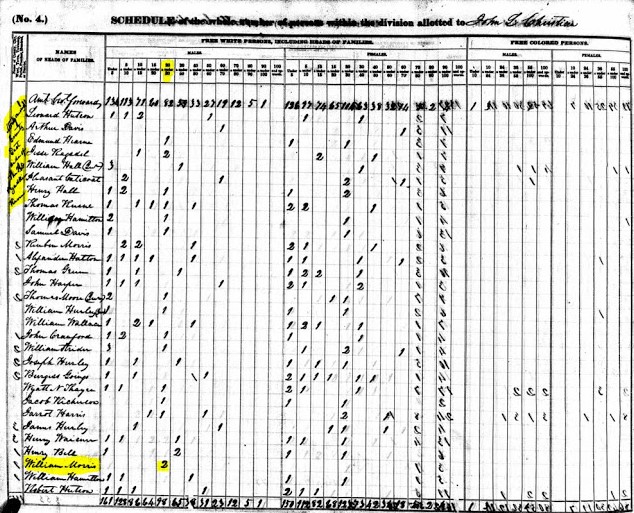 Family tradition says that George married Elizabeth Williams around 1845 and around 1849, a daughter, whom was named Elizabeth, was born to this couple. The 1850 Census being enumerated on the 20th day of Sep 1850, George and Elizabeth are found with 7 month old daughter, Elizabeth, making her birth month Feb. I am not sure where the family made their home as the township is not stated on the 1850 Census.

The 1880 Census shows this is a family that sticks close together. Living in Rocky Springs, George and wife Elizabeth still have one child, Millie Francis, living at home. Next door, in dwelling 76, lives daughter Elizabeth, with husband, William Williams and their children, John, Christine, James, Lillie and Claudy. And in dwelling 77, lives daughter Julia with her husband, Gaston Dennis.

Sometime between the 1880 Census and 1895, Elizabeth, wife of George, would die. I have not as yet been able to confirm where she is buried. George would go on to marry Louisa Smith, daughter of Reuben and Julia Smith, in 1895, about a year after daughter, Millie Francis, marries Edward Brewer in 1894.

In 1900, George and Louisa, his second wife, are found still in Ophir and living next door to George’s namesake, George Washington Morris Jr and his wife Margaret and their children.

George died intestate, leaving his widow, Louisa, to file a Petition for Dower, 1/3 of the 169 acres lying on the east side of Barnes Creek. His children, and heirs at law, wrapping up the final business that George had and burying their father. I am currently still searching on where George is buried. 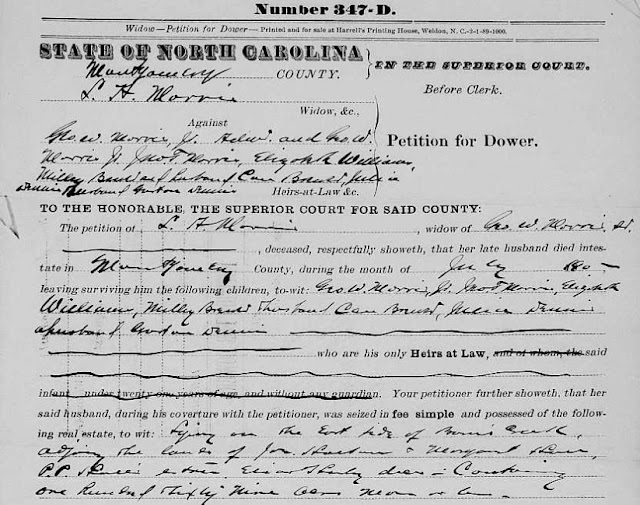 Posted by Uwharrie Roots at 9:01 PM