Eliza Morris, daughter of John Jacky and Amelia Morris, is my third great aunt. According to her grave stone, she was born 11 Jun 1818, most likely in Montgomery County, North Carolina. She died 14 May 1890 in Montgomery County and is buried in the Morris Cemetery. According to Find-A-Grave, the cemetery is located south of Uwharrie Township off River Road. There are four legible stones at this time, one which was legible in the mid 1990's, but has since eroded away. There appear to be two unmarked children's graves and three other graves, also unmarked. 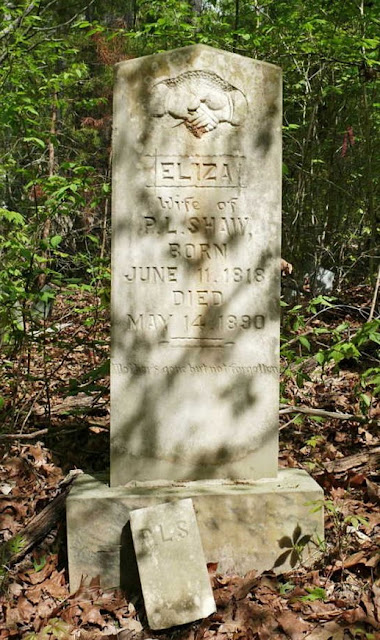 The earliest Census I can infer for Eliza is 1830. She is listed as female between the age 10 thru 14, living in the home of John Morriss Senior, East of Pee Dee and Yadkin River. There are two males listed 10 thru 14. At this time I am not able to place who the second male child is. 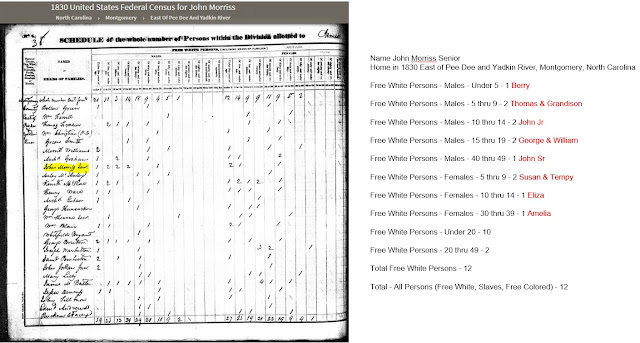 The listed neighbor, Archibald Graham, entered 13 acres in 1830 on both sides of Clark's Creek, but the grant was never issued, the area looks to be just north of current day Mount Gilead, close to Clark’s Creek, possibly around Dutchman Creek or Cedar Creek. This fits nicely with my family stories that John Jacky and family lived near Dusty Level. 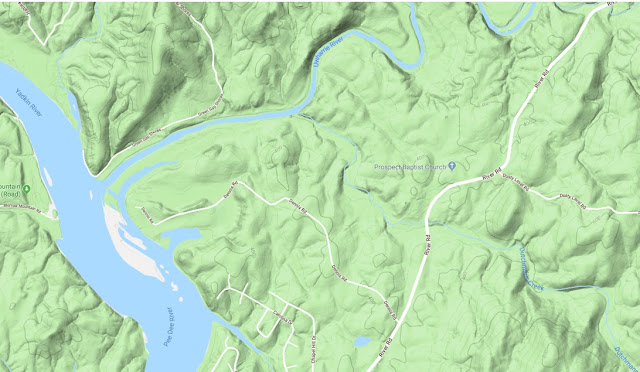 In 1840, Eliza and her family are listed as living West Pee Dee River between Nancy Bell and William Harris. However, if you look closely at the Census record, a notation is made that says, “Montgomery County East side of the PD & Yadkin River.” That means that Eliza and her family are literally located east of the River. Pretty much in the same vicinity as they were in 1830. 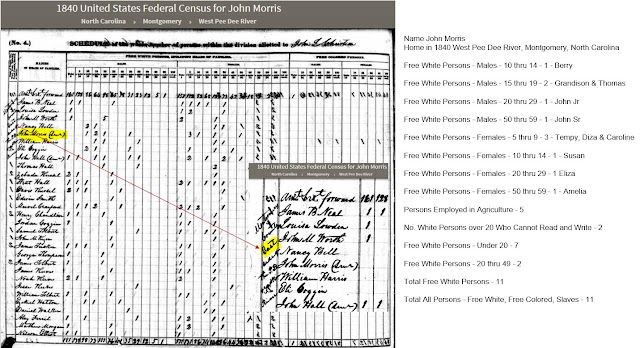 By 1850, Eliza, now 28 years old, can be found on the 1850 Census with her husband, Pinkney Shaw. The couple lives between James Hurley, who, according to land grants, lives on Barnes Creek, on land adjoining Joshua Hurley, a Revolutionary War hero and Isham Hicks, who lives on Cedar Creek.

On the previous page of this Census lives Thomas Shaw, age 61, and his wife, Elizabeth and several children. I have not been able to prove that Thomas is Pinkney’s father, but it is worth mentioning that they are neighbors.

Previous to his marriage to Eliza, Pinkney Shaw, on 26 Jan 1846, entered into a $500 bond with A. H. Sanders to support a child he had fathered with Rosetta Hurley, who went on to successfully sue him in 1852, 1856 and 1859 for child support, something almost unheard of in that time. 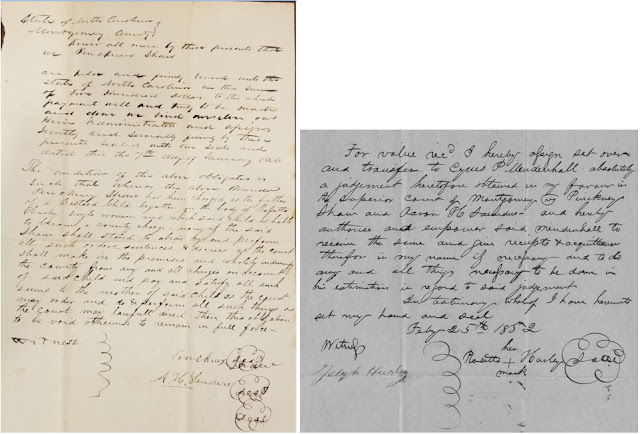 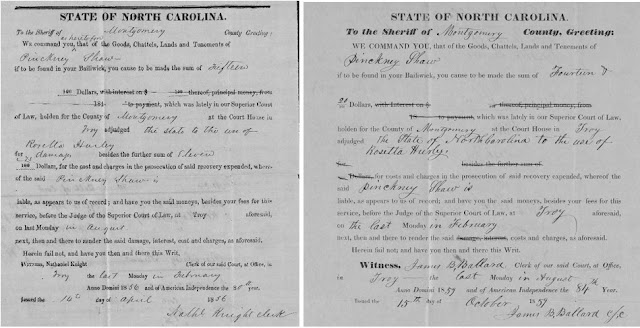 On 6 Aug 1860, in the Fork District (current day Eldorado), D. R. Cochran enumerates Eliza, with her husband, Pinkney and son, John F, age 1. Living with the couple is Matthew Coggin, son of George Coggin and Priscilla Hearne and his wife, Margaret Kearns. I am not sure who the parents of Margaret are, but Silas Kearns was named as Administrator to the estate of Matthew Coggin in 1863, along with Margaret. Of interest, Eliza’s sister, Rhoda, married Alford Kearns and I will dig deeper into this family when I start the Blog on Alford and Rhoda Morris Kearns.

1870 finds Pinkney, Eliza and son, John Frank living in Uwharrie Township. At this time, I cannot say with any certainty who Frank Coggin or Nancy Us[s]ery are.

In 1880, Pinkney, Eliza and son John, are still living in Uwharrie Township. With them lives 18 year old James Coggin, who meets the age requirement to be the Frank Coggin listed on the 1870 Census.

On 21 Dec 1885 John Frank Shaw, age 26, and Ophelia Morris, age 16, daughter of James Calvin Morris and Frances Cook were married by I. E. Sanders, at the home of the bride’s father. 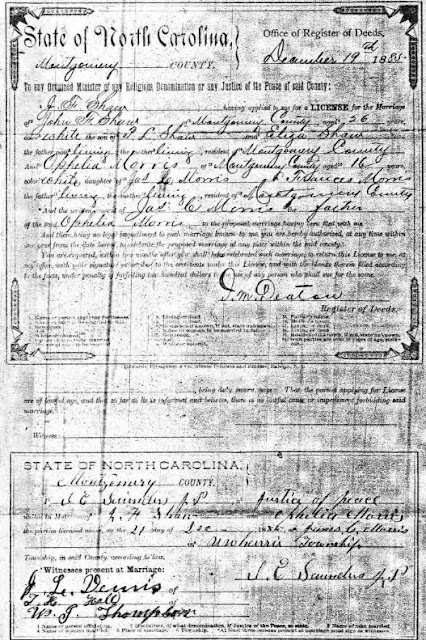 In Feb 1887, John and Ophelia’s first child, Claudius C Shaw, was born. He would go on to marry Mary Clodfelter, daughter of Alexander and Queen Clodfelter. In April 1889, Eliza’s namesake would be born to John and Ophelia. Eliza, who would never know the grandmother she was named for, would grow up to marry Ira Bruton, son of Moses and Nancy Ann Bruton. John Frank and Ophelia Shaw would have five more children, all sons, James (1892), John (1893), Thomas (1897), Ceburn (1900) and Lee (1901).

After Eliza died in 1890, Pinkney married Julia Ann Dennis. To this union, two children were born, Carie (1894) and Mamie (1898). Julia Ann Dennis is the daughter of Mark Dennis and Mary Ann Dennis. I do not know yet know who her parents are, but the marriage record and one of the children’s death certificates list her as maiden name Dennis. So, it is likely that Mark Dennis married a cousin.

Pinkney Shaw died in 1905 and is buried at the Morris Cemetery, beside his wife, Eliza Morris Shaw. 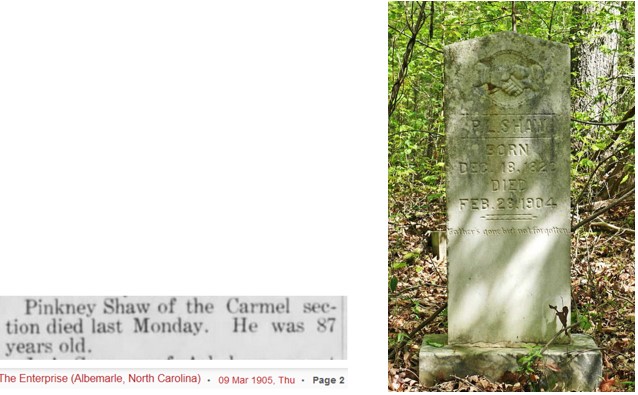 Posted by Uwharrie Roots at 8:32 PM