Nancy Morgan, the youngest child of Hardy and Nancy Hearne Morgan, was born about 1832 in Montgomery County, North Carolina. At the time of her birth, her family lived on the Uwharrie River between Barnes and Spencer Creeks. This area would, sometime prior to 1888, become known as Uwharrie Township, but at the time Nancy was born, the area was known as Morgan’s Store due to the Post Office that established on her father’s land from 3 Mar 1823 until 15 Jul 1836. I have heard this area also called Morgan’s Ford, where people could cross the Uwharrie River on Hardy’s land, current day location is around where the bridge crosses the Uwharrie River on Hwy 109. 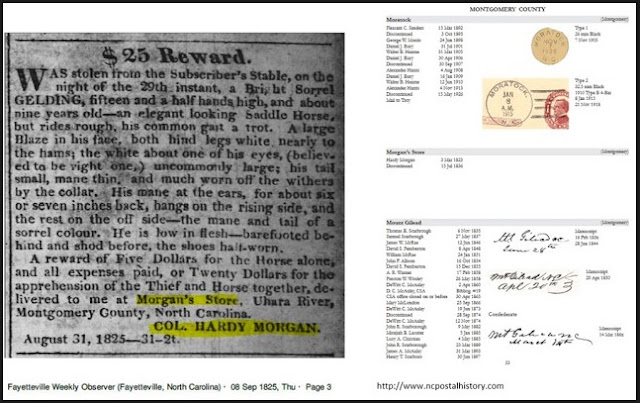 Long before Nancy was born, the county seat had moved from Henderson, established in 1792 at the confluence of the Yadkin (Pee Dee) and Uwharrie Rivers, and where her brother, Alexander, was born in 1809, to Lawrenceville, the fourth county seat, the original town plat dated July 2, 1817, located at the current day Uwharrie Trail trail-head, on NC 24/27, west of Troy, and just at the other end of River Road, seen on the below map.

Hardy Morgan farmed the land here, and lived on the same creeks I played in as a child. My great grandmother and grandparents lived where Spencer Creek met the Uwharrie River and my parents, my siblings and I lived just beyond Barnes Creek. Later we would move closer to Badin Lake, but this area is where I have my earliest memories. In 1824, at the age of 29, Hardy Morgan was granted forty acres of land in Montgomery County on both sides of Uwharrie River, including an island. Beginning at a white oak on the bank of the said river near Titus Bunnel’s corner, opposite the fish trap, and runs with his (Bunnel’s) line ….. To a point below the mouth of Spencer Creek and crossing the river at the upper end of the island to a stake on the west bank Charles Morgan’s line. Entered 7 Jul 1824 and issued 16 Dec 1824. 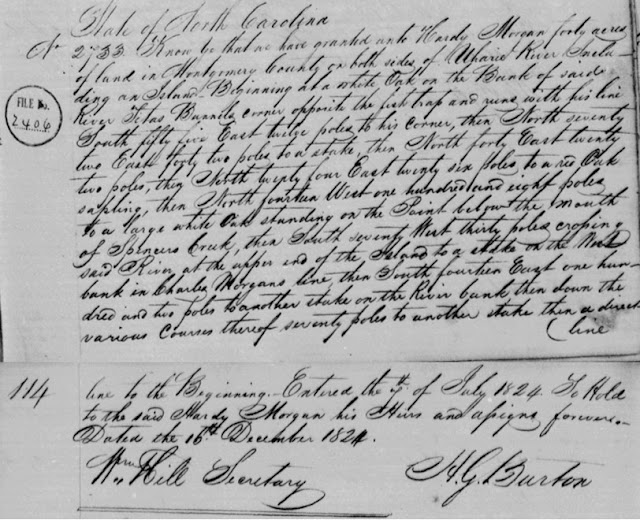 On 2 May 1828 Hardy Morgan entered another Land Grant for 120 acres of land on both sides of Barnes Creek beginning at Shadrach Stewart’s corner white oak, crossing Barnes Creek and adjoining to neighbor James Hurley’s line. The Grant was issued on 2 May 1829, just three years prior to Nancy’s birth. 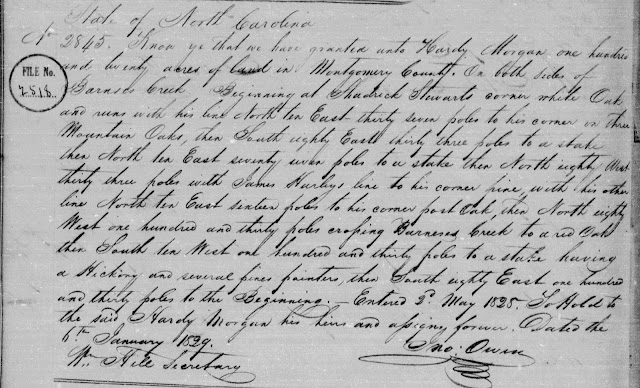 Economic hardships in North Carolina were nothing new. According to an article at NCPedia, “From 1815 to 1835, the state was deemed to be so undeveloped, backward, and indifferent to its condition that it appeared to be as comatose as Rip Van Winkle (earning North Carolina the nickname the Rip Van Winkle State). In 1830 a legislative committee reported that North Carolina was "a state without foreign commerce, for want of seaports or a staple; without internal communication by rivers, roads, or canals; without a cash market for any article of agricultural product; without manufactures; in short, without any object to which native industry and active enterprise could be directed." https://www.ncpedia.org/rip-van-winkle-state

Yet, another NCPedia article says, “At alarming rates, emigrants fled its (North Carolina) stagnant economy, worn-out farmland, poverty, and lack of opportunity. Among the state's greatest handicaps was inadequate transportation. Only a few rivers in the east were navigable, and even these were shallow and difficult to travel. The coast offered few good harbors, and roads, where they existed, were terrible. Under such conditions transportation was slow, inefficient, and so expensive that farmers could not afford to ship their produce more than a few miles.” https://www.ncpedia.org/internal-improvements

It was under these conditions that Nancy’s father, Hardy, was appointed to a committee called “Internal Improvement” where he and other community leaders would work together to promote various projects such as building and improving roads so farmers could get their crops to market to sell, raising public interest in railroads, engineering surveys, public education, and river navigation.

In 1837, Hardy Morgan invested in the Cape Fear, Yadkin and Pee Dee Rail Road Company. The corporation was empowered to construct a rail road beginning at the Cape Fear River in Fayetteville to the summit of the Narrows of the Yadkin with the Pee Dee at the mouth of Rocky River, they were to build into Mecklenburg and Lincoln counties embracing Asheborough in Randolph County. The company was to lay out roads at least sixty five feet wide and were authorized to take land as long the corporation paid for it. Unfortunately, the project was met by so many difficulties, and being regarded as a doubtful experiment, the work was abandoned. 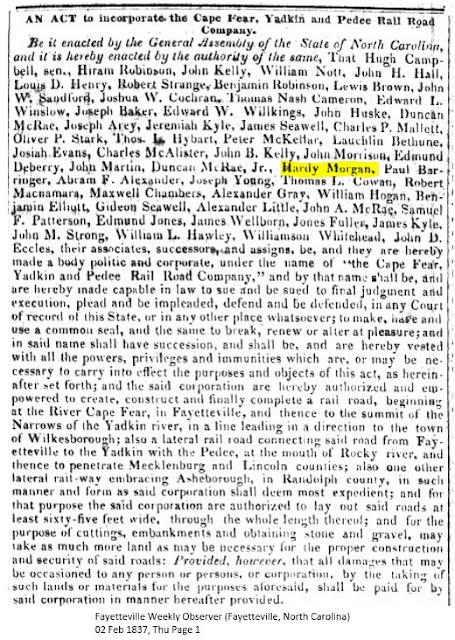 Evidently, improvements and business were not moving fast enough, and times were hard. In 1838, Hardy and his oldest son, Alexander, as well as many other men in the county, lost land to pay taxes for years 1836 and 1837. By 1842, Hardy Morgan was declared bankrupt. Nancy was only 10 years old. 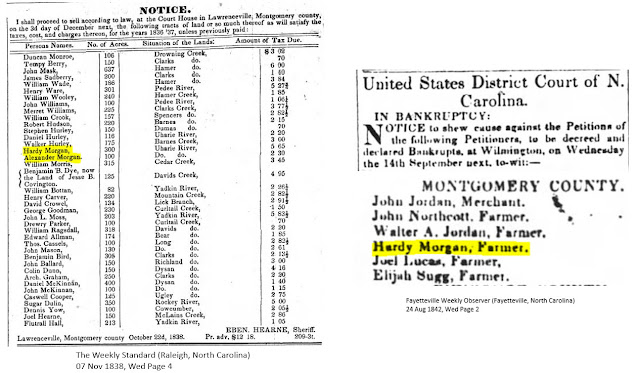 In 1840, Nancy is listed on her first Census as living in Montgomery County, North Carolina, East Pee Dee River, age between 10 and 14. This would be the only Census that Nancy made in North Carolina. Her oldest brother, Alexander, has already left home, being age 31. Nancy’s sister, Caroline, born in 1816, has married Colin Beckerdite from Randolph County and is living in McNairy County, Tennessee. Caroline will die in childbirth in the year 1843. 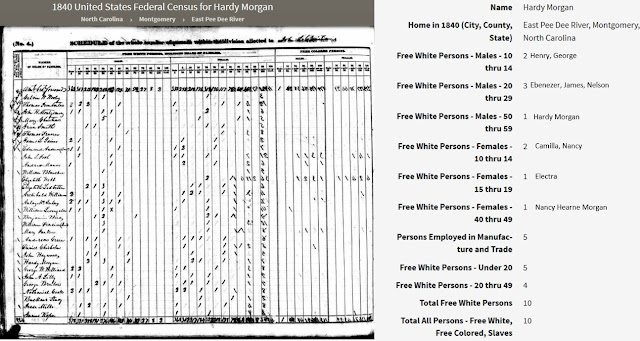 Most likely, due to the economic hardships, the Morgan family decided to make the move west, as Caroline and her husband, Colin Beckerdite, had done prior to 1840. The Morgan family packed up what belongings they could and headed to Pontotoc, Mississippi where they are found in the 1850 Census. Nancy is 18 years old, what an exciting and frightening time she has had to be so young.

The Mississippi State and Territorial Census for 1845 lists several Morgan’s, I know Alexander and Nelson are the brothers of Nancy and sons of Hardy Morgan. David Morgan, who is found in land records in Montgomery County, North Carolina, and is listed as age 62 on the 1850 Pontotoc, Mississippi Census, making his birth year 1788, is possibly a brother to Hardy Morgan, who is listed as age 65, birth year 1785.

I made mention of David Morgan in my post, Crump v. Morgan. In a deed titled Charles Morgan & Willis Morgan to Green Davis, Charles Morgan and Willis Morgan gave a note to William R D Lindsay Guardian for Letitia A Crump for the sum of Ninety-five dollars payable the first Day of Oct 1839. Should Charles and Willis not pay the note on or before the 25th day of Dec 1839, Green Davis as security for the debt, would be responsible to pay the note. Charles and Willis Morgan made a deed of security so Green Davis could get his money back by selling a 50 acre tract of land owned by Charles and Willis Morgan on the East side of the Uwharrie River and South side of Spencer’s Creek and North side of the big road (current day Hwy 109) crossing at Morgan’s Ford (current day Uwharrie River bridge on Hwy 109) on said river and leading to Fayetteville adjoining the land of William Hamilton, William Harris, Aaron H Saunders, N & P Harris & David Morgan.

On 11 Jan 1853, in Pontotoc, Mississippi, Nancy Morgan married John Milton A. Ferguson, the son of Ansel Harrison Ferguson and Cynthia Foster. John was born in Tennessee in 1829 and migrated with his family to Pontotoc prior to 1840.

1870 finds the Ferguson couple in Center Township, Sebastian County, Arkansas with children, Tennessee A., born 1851, which means if this is her correct age, she is not the child of Nancy. Also in the home is Theodor, born 1853 which could be O.W. who is mentioned on the 1860 Census. Eliza, born 1857 could be the Frances that was mentioned on the 1860 Census. Perhaps her name is Frances Eliza. Mira M, born 1859 and Walter E, born 1869 are new to the Census.

Nancy Morgan Ferguson died between the 1870 and 1880 Census years and her husband, John remarried to Rebecca Jane Townsend. The 1880 Census finds even more confusing information in regards to the children. It is clear that John M., born 1878 and Clarinda, born 1880 are the children of John and Rebecca Townsend Ferguson.

I am not, at this time, able to find the grave of Nancy, but I feel certain she died in Arkansas. John Milton A. Ferguson died 24 Jan 1921 in Drew, Arkansas.
Posted by Uwharrie Roots at 10:06 PM