Grandison is my third great uncle, born, according to his gravestone, on 2 Oct 1823, the fifth child of my third great grandparents, John Jacky and Amelia Morris. He is one of my more interesting Morris ancestors. While not many records exist, or were ever captured, on his siblings, and none but the Census records, it seems, on his parents, Grandison lived a life that was steeped in records. He owned a General Store, lived in town, and was involved in church, politics and community. He, obviously, was the kind of man who would not be comfortable living the life of a miner or a farmer out in a rural area. He was a businessman, and of course, that meant records of the life he lived remain.

My guess, based on a Newspaper clipping printed in The Daily Times-News (Burlington, North Carolina) 08 Aug 1967, Tue Page 6, is that all of the children of John Jacky and Amelia Morris were born in Montgomery County, North Carolina.

In the Newspapers account, George, Grandison’s nephew, entertained with stories of his Morris ancestors, telling how they came from England, settled in Virginia, and then moved down into Montgomery County, North Carolina in 1805. 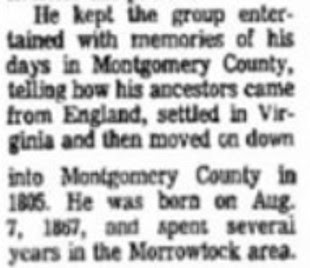 The first glimpse history offers us of Grandison is on the 1830 Census record for Montgomery County, North Carolina. He is a male between 5 and 9 years old, living east of the Pee Dee River with his father, John Morriss Senior.

I have often wondered about the ‘Senior’ on the end of John’s name. There were two known reasons why a male would be distinguished as such. 1) Because he has a son named after him who is designated as a junior or 2) There is another male in the same area, with the same name, who may be no relation to each other; and it is just a way of notating which is the older and which is younger.

In John’s case, he is listed as a Senior, between the ages of 40 and 49 (he is actually age 42 as he was born in 1788) and while he does have a son named after him, John Junior is only between the ages of 10 and 14 and listed in the same household as his father, John Senior. I believe the John Morris Junior listed on the 1830 Census is the one who became known as John ‘Bushyhead’ Morris, the son of Thomas Morris, who migrated from Virginia to Montgomery County around 1790. 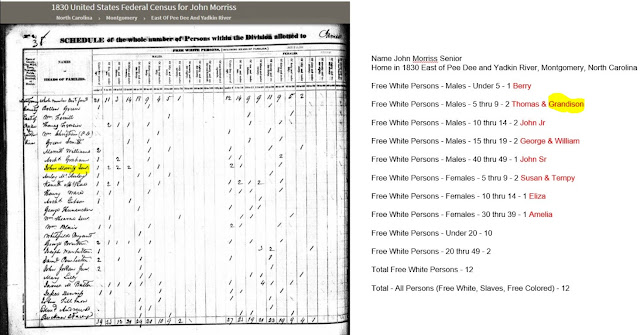 In 1840, the Census shows Grandison still at home with his parents, listed as a male between the ages of 15 and 19, his actual age is 17 years. The family is still living east of the Pee Dee River, probably in the vicinity known as Dusty Level, around Cedar Creek, current day River Road area. 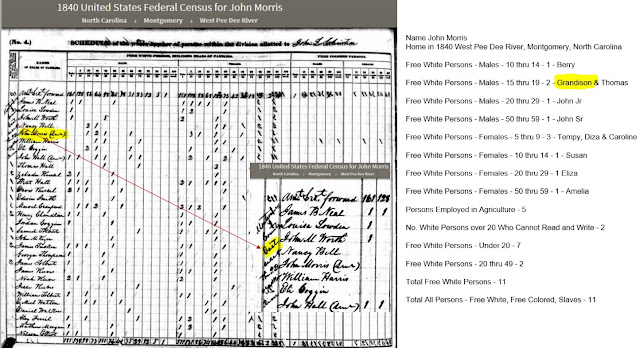 Grandison, listed in 1850 as a Laborer, married around the year 1845 to Mary, as she is listed on the 1850 Census. A son, Parsons, was born about 1846 and is listed as age 3 on the 1850 Census. Two daughters, Elizabeth and Martha, are listed as 9 month old twins. I have not been able to find a marriage record for Grandison and Mary as yet, but all of the children lists mother’s maiden name as [Molly or Malsay] Williams, so I am guessing that Mary’s maiden name is indeed Williams.

In 1860, Grandison and wife, Mary, now called Malsey, are listed s living in Brutons, Montgomery County, part of Troy, the county seat. One child, a son, Ananias, born about 1853, has been added to the family. 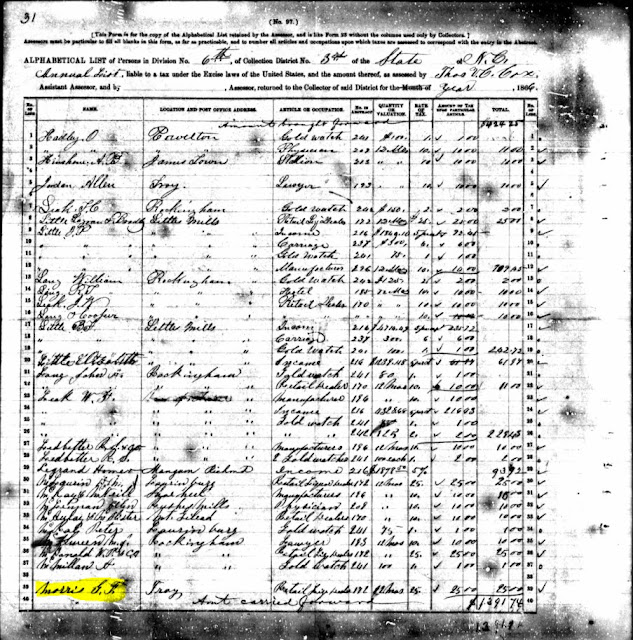 By 1870, Grandison has moved his family to Troy, the county seat. Mary, Malsey, Grandison’s wife, is now listed as Mollie. It is a wonder that any genealogist can find anyone, what with the way our ancestors changed their names and ages every ten years!

Grandison Jr was born between the Census years, in 1862.

The first mention in Newspapers (that I am sure of) of Grandison is 1879 when Colonel Allen Jordan made two references about his land and his General Store, Morris & Co.

COL. Allen Jordan was a long time citizen of Montgomery County and the longest practicing attorney there. He represented Montgomery County in the General Assembly from 1862-66, 1873-74, and 1887-89 and was a member of the Constitutional Convention in 1868. COL. Jordan died in the court room at Troy in 1907 while prosecuting a case. His wife, Mary Horton Jordan ran the post office in Troy for twenty years before her death in 1905. 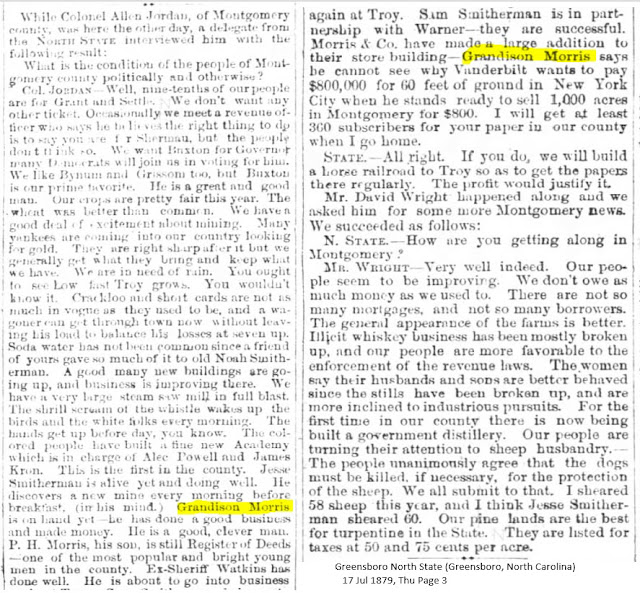 1880 tells us that Grandison (going by his initials, G.F.) is still living in Troy. Mary/Malsey/Molly is now going by her initials too, M.E., as are the children, Martha, Ananias and Grandison Jr.
Elizabeth Frances Morris married John Roby Crook in 1873 and has moved from her parent’s home. By 1900, Elizabeth and husband, John will be living in Providence, Rowan County, North Carolina.

I also know this is my Grandison because his daughter, Elizabeth, married J.R. (John Roby) Crook and moved to Rowan County.

So, I checked Fold3 and found several Civil War documents alluding to a Grandison, an Athan L, and a Groves Morris. This is either the most interesting document in history or the most coincidental one!
Groves Morris, born about 1803, to William Morris and an unknown mother, in Granville County, North Carolina, is the grandson of John Morris and Phebe Tudor. Groves migrated to Georgia before 1830 as he is found on the Census for Habersham, Georgia. Athan L Morris is the son of Groves and great-grandson of John and Phebe Tudor Morris. This is the line that my male cousins and paternal Uncle Y-DNA match to. 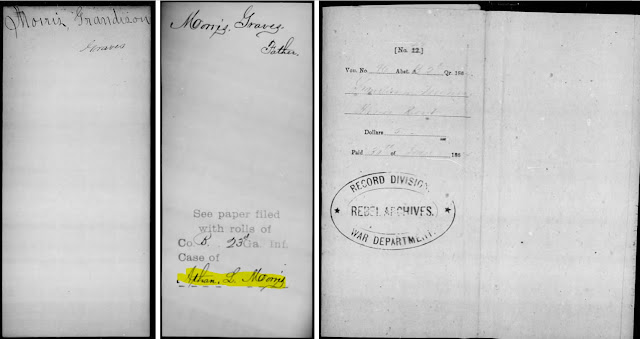 The fourth document in the collection is also difficult to make out, but looks to be the receipt to Grandison Morris for the house or horse rent. The clearest writing on the document states Montgomery County. 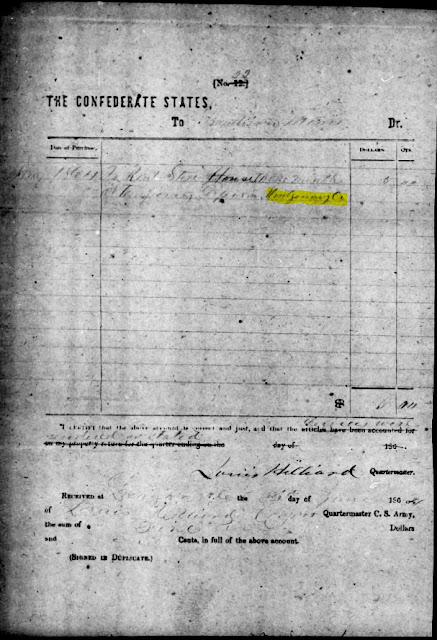 Checking Fold3 for a file on Athan Morris brought me to a file with 22 pages, most of the documents in this file are the typical cards one sees with only the name, rack, and company information. The other documents were receipts of clothing issued. Two of the documents were telling as they provided proof that Groves Morris is the father of Athan and that Athan died December 15, 1861. Another document in the file states that Athan died on the 16th of December at Yorktown, VA.

On 10 Jan 1886, Mary/Malsey/Molly/M.E. Morris dies and is buried at Southside Cemetery in Troy, North Carolina. Her gravestone states her name is Molly E, wife of G.F. Morris. 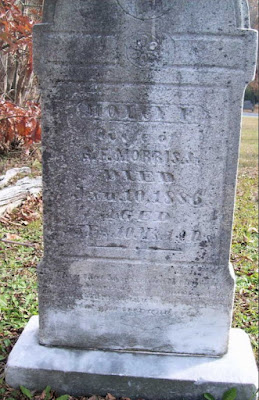 Nine months after the death of his wife, Mary, Grandison remarries to Eliza Williams in Randolph County. The couple make their home in Troy with Grandison’s daughter, Martha, who to my knowledge never married. The Census taker listed Grandison and Eliza as being married 14 years, but the correct number is 4 years. 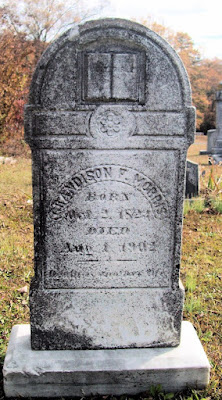 In a Newspapers article, The Montgomerian (Troy, North Carolina) dated 08 Feb 1912, Thu Page 2, an article was written with a keen description of what Troy looked like at the time Grandison lived there. The article says that G.F. Morris lived on South Main Street and the old oak tree in front of his home had to be cut down due to disease.

At one time, Troy had many giant oaks, hickories, black gums and elms. By 1912, few were remained.

The article paints the historical picture of the court house burning in the 1880’s and the fire that destroyed the Morris store. The double offices on east Main Street and the stores of Smitherman and Watkins, the black gums that stood in front of the Allen home on West Main Street. 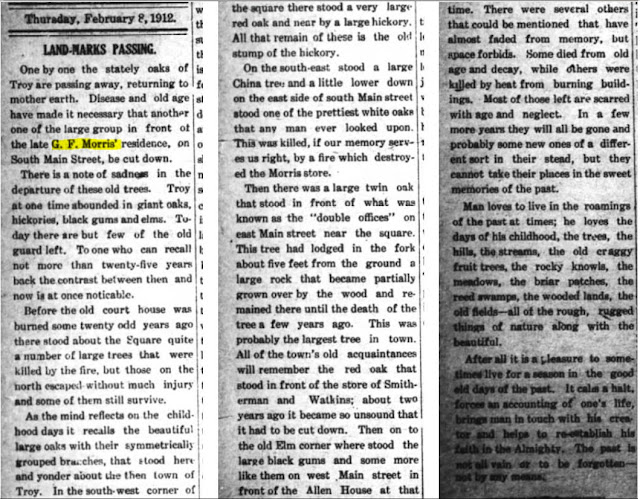 Man loves to live in the roaming’s of the past at times, he loves the days of his childhood, the trees, the streams, the old craggy fruit trees, the rocky Knowles, the meadows, the briar patches, the road swamps, the wooded lands, the old fields - all of the rough, rugged things of nature along with the beautiful. After all it is a pleasure to sometimes live for a season in the good old days of the past...

In the places our ancestors called home…
Posted by Uwharrie Roots at 9:51 PM