Thomas Morris, let me count the ways I am related to you

Long before there was any such thing as a commercial DNA test, I knew I was related to Thomas Morris through both my parents, who are second cousins, once (or a generation) removed. That word ‘removed’ can really cause a lot of confusion. I have found multiple ways to explain it though, and most people will catch on to at least one of the meanings.

Can you see a pattern developing?

Can you see a pattern developing?

Drawing out the relationship on paper is also a good way to catch hold of the meaning, if you are the visual type of personality. Here is what my parents cousin relationship looks like. 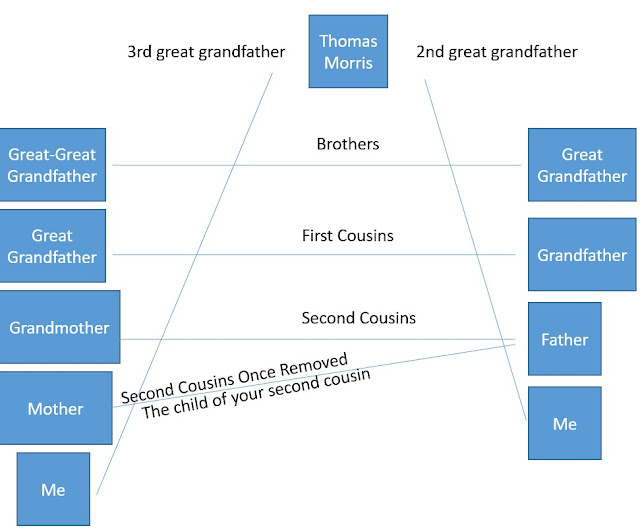 When I DNA tested, I was able to upload my raw DNA data file to a site called GEDmatch. It was at GEDmatch that I was able to obtain an even better visual of the amounts of the same DNA I inherited from both my parents. This visual does not mean that all of this DNA, shown in the blue, belongs to Thomas. Through the use of other tools and techniques, I do know that some of it does. Be careful interpreting DNA results. See the end of this Blog for some of my favorite places to learn about analyzing DNA results. 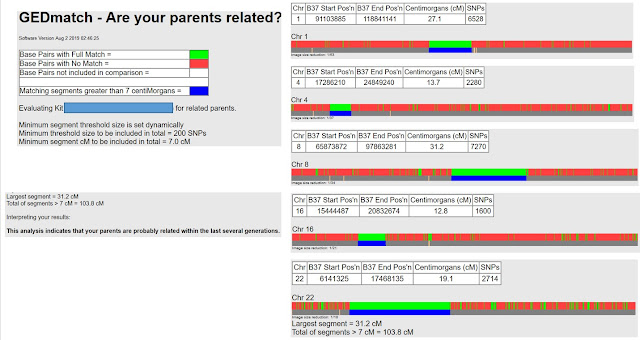 The first glimpse I get of Thomas is on the 1830 Census listed in the home of his Father, John Morriss Senior, east of the Pee Dee River, as a male between the ages of 5 and 9 years old.

The second glimpse I get of Thomas is on the 1840 Census, still living in the home of his father, east of the Pee Dee River, he is between the ages of 15 and 19. 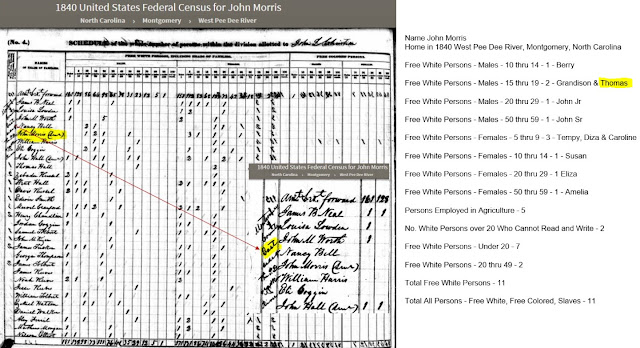 Around 1845, Thomas married Mary, called Polly, Williams. I have not been able to find a marriage license for Thomas and Mary, it was most likely burned in the court house fire, but their children’s death certificates all list Mary or Polly Williams as mother’s maiden name.

By 1850, Thomas and Mary are living between John Morris Senior, Thomas’s father and John Morris Junior, Thomas’s brother. The township is not stated, but most likely the area is Uwharrie. Thomas is listed as a 25 year old miner with wife, Mary, age 22 and children, William, age 3 and Elizabeth, age 1.

In 1870 my Morris family seems to have disappeared from the Census records. I am not sure if they were simply overlooked and not enumerated or if they have moved to another county or even another state. I am still on the search for them for 1870!

There is no 1890 Census so I am not able to track the Thomas Morris family on a Census until 1900, which shows Polly, the wife of Thomas Morris, a widow living with her son, my great grandfather, whose name has been changed to John.

John is also listed as a widow as his wife, Ella Wade, died before the 1900 Census.

Family stories say that Thomas Morris died after 1891, though I have not been able to find any documented proof as to when he died and I do not know for sure where he is buried. Mary Polly Williams Morris, wife of Thomas, is buried at Prospect Baptist Church Cemetery on River Road. Her death date is listed as 28 Feb 1910.

If you want to know more about DNA there are tons of Books, Blogs, Videos, and Facebook Groups that can assist in doing that. Some of my favorite are: