Mary Ann Smart, daughter of Nathan Smart, is not the wife of Mark Dennis

There is much confusion on who the Mary is that married Mark Dennis, 1850, in Montgomery County, North Carolina. Mark Dennis is the son of James Dennis and Mary Morgan. According to the 1850 Census, James is 52 years old, making him born about 1798. Mary is listed as age 52 as well, making her born the same year, 1798. The only reference I have thus far been able to find to Mary’s maiden name is on the death certificate of her son, Littleton Jackson Dennis, who died in 1922 at the age of 102 years. Mary’s maiden name is reported as Morgan by her grandson, L.M. (Levi Madison) Dennis.

As noted in previous Blogs, Mary Morgan is not the daughter of Joseph Morgan and Susannah Smart, who married Joel Henderson after Joseph died. I do not know who Mary’s parents are, but I know who they aren’t. Susannah is too young to be Mary’s mother (she was only 6 when Mary was born) and there is no female, Mary’s age, ever found on the Census records in the household with Joseph and/or Susannah. It is possible (but not proven) Mary Morgan is the daughter of Zachariah Morgan who was born about 1770 in Chatham County, North Carolina. Zachariah Morgan migrated to Montgomery County after the Revolutionary War and lived on the road leading from Fisher’s Ferry to Fayetteville; joining the land of Andrew Dennis, who lived on Cedar Creek, current day River Road area. 100 acres of Zachariah’s land sold for taxes due in 1809, 1810, 1811 and 1812. It would not be a stretch to think that James Dennis married the girl next door. 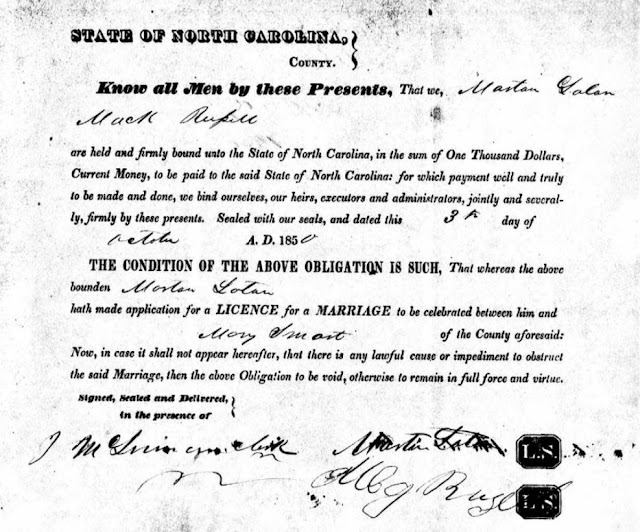 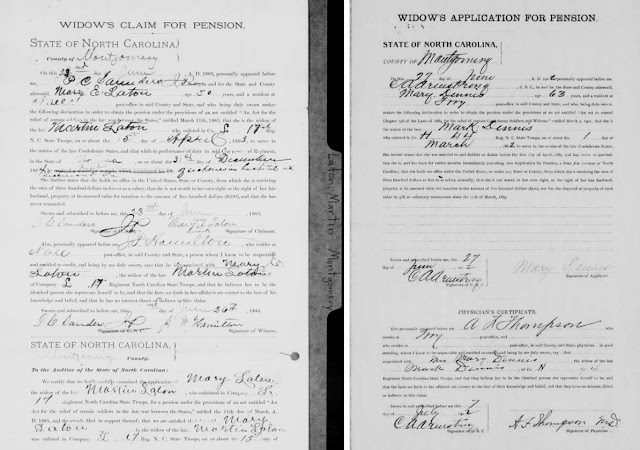 In 1865, Mary Laton, widow of Martin Laton, filed a petition with the court for one year’s support from the estate of her husband. In 1866, the Administer of the estate, who is Nathan Smart, informed the court that Mary had already been provided her one year's support. In this record, it states, "...the undersigned, being appointed at the last term of this court to lay off a year’s support for the Petitioner, beg leave to report that they were informed by the father of the Petitioner that the years support had been laid of[f] some time since...your commissioners ask to be discharged..."

The most compelling evidence I can provide that Mary Smart, daughter of Nathan Smart, married Martin Laton, is the estate record of Nathan W Smart, that lists Mary Laton as an heir to his estate.

Census records show in 1870, Mary is back home with her parents, N. W. and Ruth Smart and is listed by her maiden name, Smart.

In the 1880 Census, Mary is listed in the home of her mother, Ruth Smart, as Mary Laton.

Mary Laton looks to have died in 1894. Her estate record can be found on Family Search.

As noted previously, Mary Dennis, wife of Mark Dennis, died after 1902, as that is the date on her widow pension claim.

Of interest, in the estate file of Nathan Smart (1875) is found a bond for the minor children, Mary Smart and Eliza Smart, dated 1849. The three men who signed the bond are William Smart, Wilson Smart and Lockey Henderson.

I do not know who these children are or why Nathan Smart was their guardian. Should any readers know who Mary and Eliza Smart are, please leave a comment letting me know. 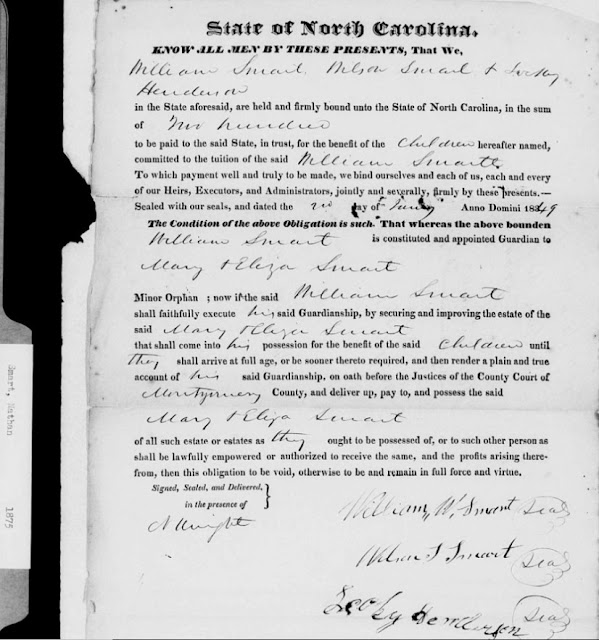 Posted by Uwharrie Roots at 5:08 PM