Berry Morris, like most of my Morris ancestors, did not leave a noticeable footprint to stand the test of time. In fact, with the exception of a few records, I would not even know he existed. Berry, being the eighth child born to my third great grandparents, John ‘Jacky and Amelia Morris, in Montgomery County, North Carolina; he is found on the 1830 Census as a youngster, being under five years of age. 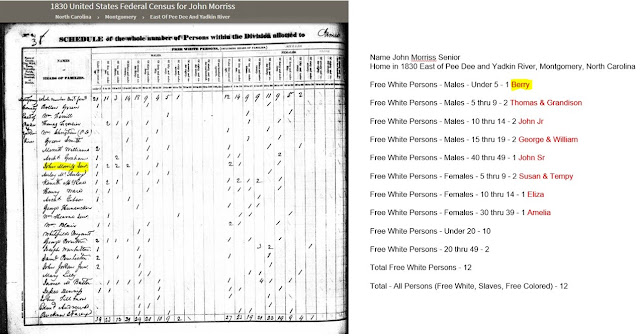 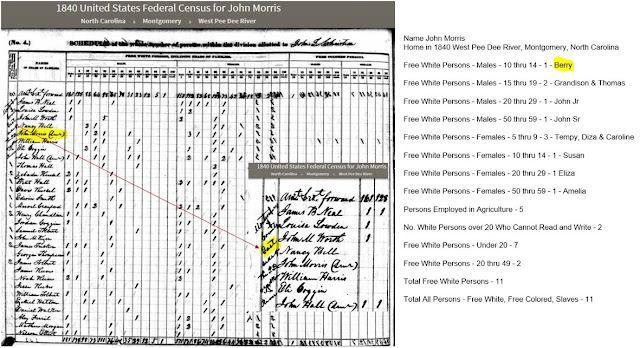 The 1850 Census shows Berry, a Laborer, with wife, Sarah, and one child, Lyden (I believe, based on future Census records, the name should be Liza). Some research I have reviewed says that Sarah’s maiden name is Hurley, and I think some researchers simply deduced this as Berry and family are living between Neil Hurley, age 54, and Daniel Hurley, age 33. However, one of the children’s death certificates reports Sarah’s maiden name as Williams.

Thus far, I have found that I am related to some of the Hurley’s by several marriages, but, to my knowledge right now, I am not directly related to them. If you have been reading along with the Blog, you will recall that Pinkney Shaw, who married Berry’s sister, Eliza, had a child by Rosetta Hurley.

In 1860, Berry, listed as a Farmer, and Sarah (listed as Sallie), are living in Beans District, next door to Joseph Williams, age 59, born in Virginia. I cannot help but wonder who Joseph’s father is and if he might have known Berry’s father, John ‘Jacky’ Morris, who was also born in Virginia. I hope to begin research in Virginia next year.

Upshur Williams, listed as age 21 and the son of Joseph Williams, will marry Malinda Dennis in 1870. She is the daughter of Littleton Jackson Dennis and Sarah Myrick Talbert. Upshur’s first wife, Margaret A Williamson, died between 1867 and 1870. The Dennis, Morris and Williams families intermarried with one another for several generations. 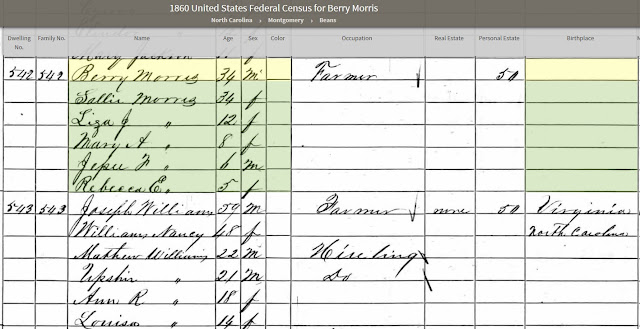 Fold3 lists two Berry Morris’s who served in the Civil War, although I have not been able to confirm if either is my Berry Morris.

The first Berry Morris served in Co B 2 North Carolina Art'y (36 State Troops) Confederate, enlisted on 29 Jan 1863 at Camp Holmes, Raleigh, North Carolina. He was present at all musters.

The other Berry Morris served in Co B 13 Battalion North Carolina Light Art'y, enlisted also on 29 Jan 1863 at Camp Holmes, Raleigh, North Carolina and was present at all musters for 1863 and 1864. In Jan and Feb 1865, it was noted that this Berry had been absent without leave since 25 Feb 1865.

Additionally, in this file, it is noted that this Berry Morris was a Prisoner of War and was paroled 23 May 1865, Troy, Montgomery County, North Carolina. There is every indication that this could be my Berry Morris. I am still working to find additional documentation to prove it.

On 27 Nov 1862, a John Morris from Troy, Montgomery Co., N.C., ran an ad in The Greensboro Patriot offering a $200 reward for the return of his pocket book containing several hundreds of dollars in cash and letters from soldiers of the 44th N.C. regiment. I do not know who this John Morris is, but find it interesting that 1. He is from Montgomery County and 2. He was traveling to Raleigh, North Carolina, the same place two Morris brothers, both the sons of John Jacky Morris, would enlist, one in 1863 and another in 1864.

I am very motivated to finding more information on these Morris men. I am particularly interested in knowing why these men went all the way to Raleigh to enlist rather than enlisting in their own county or in Rowan County, which was much closer to them than Raleigh. 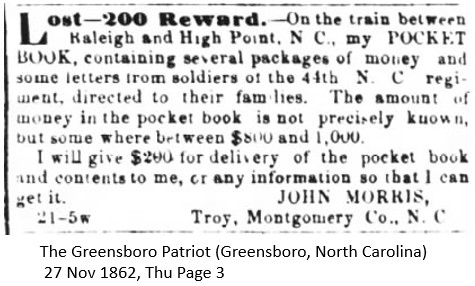 The Berry Morris descendants will marry into the Thompson, Dennis and Talbert/Tolbert families for generations to come.

Berry and Sarah Morris are not to be found after 1880. Sadly, I do not know when they died nor where they are buried.
Posted by Uwharrie Roots at 1:59 PM