Temperance Morris, called Tempie, is my third great aunt and the ninth child of my third great grandparents, John Jacky and Amelia Morris. Tempie was born 1 Mar 1830, according to her gravestone. Tempie married Jacob Sanders (Saunders) on 23 Aug 1856. John Merritt, my maternal third great grandfather, signed as bondsman. John Merritt married Deborah Sanders, who is the sister to Jacob Sanders who married Tempie, making this another twisted branch in my family tree.

Jacob and Deborah are the children of Jacob and Bethana Sanders. Some research I have seen lists Bethana’s maiden name as Leah, however, I have not seen any documented proof for this claim. 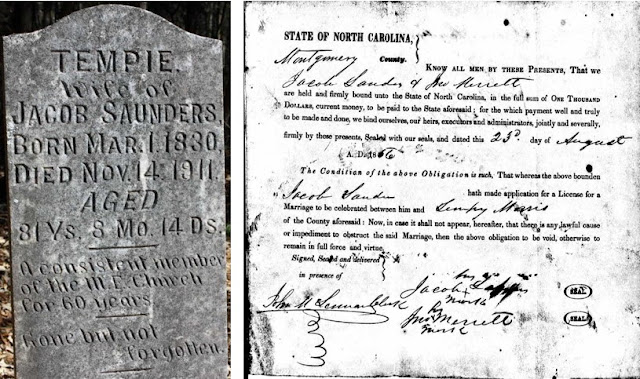 Tempie is first found on the 1830 Census, in the home of her father, John Morris, listed between the ages of 5 and 9, making her born before 16 Nov 1830, when the Census was enumerated by James Allen, Assistant to the Marshall of the District of North Carolina. 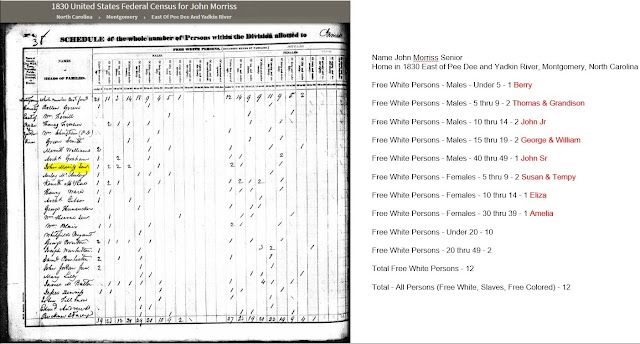 In 1840, Tempie is listed again as a female between the ages 5 thru 9, along with her sisters, Diza and Caroline. 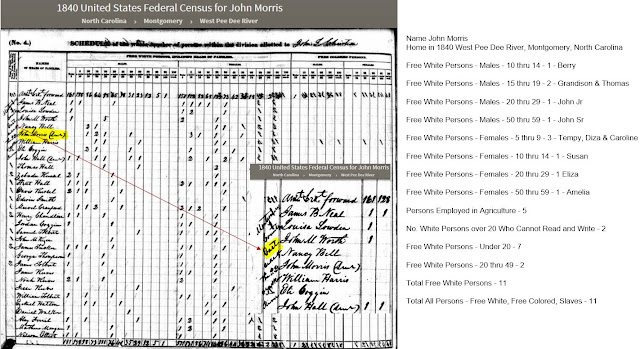 The 1850 Census shows Tempie as age 19, living with parents John and Amelia. Also in the home are Disa and Caroline.

As noted previously, Tempie married Jacob Sanders in 1856 and therefore, is found on the 1860 Census with her husband and one year old son, Emsley Harris. Tempie and Jacob are living next door to John and Deborah Sanders Merritt, my maternal third great grandparents. 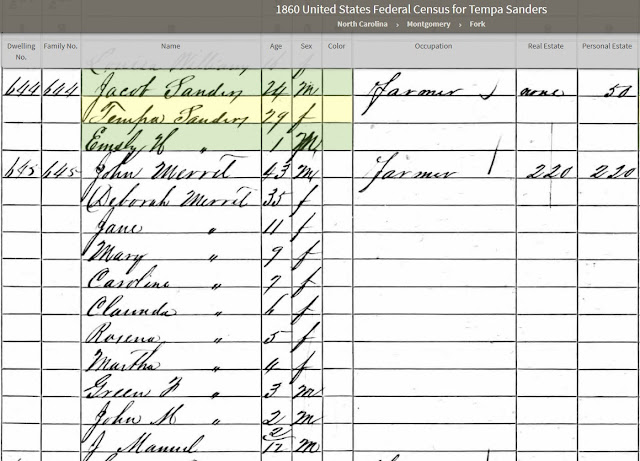 Fold3 has several listings for Jacob Sanders/Saunders. The only soldier with this name listed with a card in his file for Montgomery County enlisted on 16 Jul 1862 at Camp Holmes, Raleigh, and served in the Fourteenth Infantry. He was present for all musters until Jul/Aug 1863 when he was noted as missing since the Battle of Gettysburg. 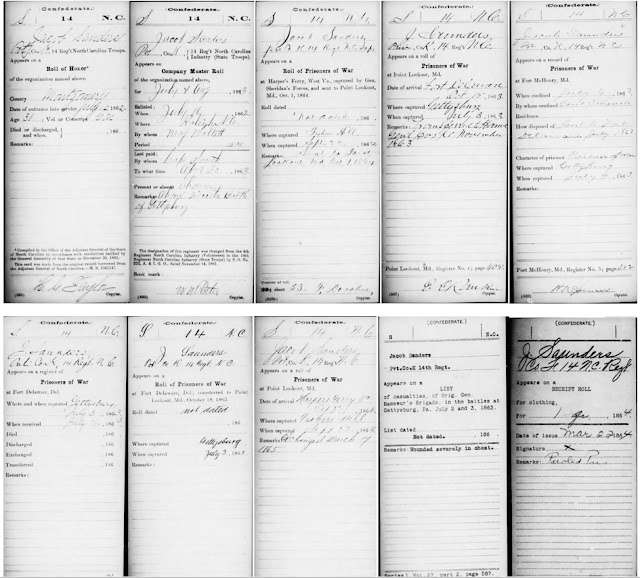 On 21 Jul 1863, the Semi-Weekly Standard in Raleigh on page 2, ran a listing of soldiers who were killed, wounded and missing. Among those noted for the Fourteenth N. C. Troops was Jacob Saunders, his condition listed as serious. 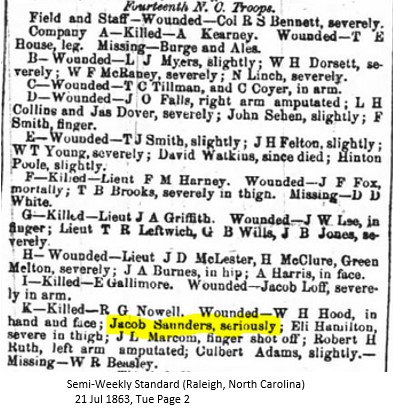 The Battle of Gettysburg was fought July 1–3, 1863, in and around the town of Gettysburg, Pennsylvania, by Union and Confederate forces during the American Civil War. The battle involved the largest number of casualties of the entire war and is often described as the war's turning point. Union Maj. Gen. George Meade's Army of the Potomac defeated attacks by Confederate Gen. Robert E. Lee's Army of Northern Virginia, halting Lee's invasion of the North.

Elements of the two armies initially collided at Gettysburg on July 1, 1863, as Lee urgently concentrated his forces there, his objective being to engage the Union army and destroy it. Low ridges to the northwest of town were defended initially by a Union cavalry division under Brig. Gen. John Buford, and soon reinforced with two corps of Union infantry. However, two large Confederate corps assaulted them from the northwest and north, collapsing the hastily developed Union lines, sending the defenders retreating through the streets of the town to the hills just to the south.
On the second day of battle, most of both armies had assembled. The Union line was laid out in a defensive formation resembling a fishhook. In the late afternoon of July 2, Lee launched a heavy assault on the Union left flank, and fierce fighting raged at Little Round Top, the Wheatfield, Devil's Den, and the Peach Orchard. On the Union right, Confederate demonstrations escalated into full-scale assaults on Culp's Hill and Cemetery Hill. All across the battlefield, despite significant losses, the Union defenders held their lines.

On the third day of battle, fighting resumed on Culp's Hill, and cavalry battles raged to the east and south, but the main event was a dramatic infantry assault by 12,500 Confederates against the center of the Union line on Cemetery Ridge, known as Pickett's Charge. The charge was repulsed by Union rifle and artillery fire, at great loss to the Confederate army.

Lee led his army on a torturous retreat back to Virginia. Between 46,000 and 51,000 soldiers from both armies were casualties in the three-day battle, the most costly in US history. (Wikipedia) 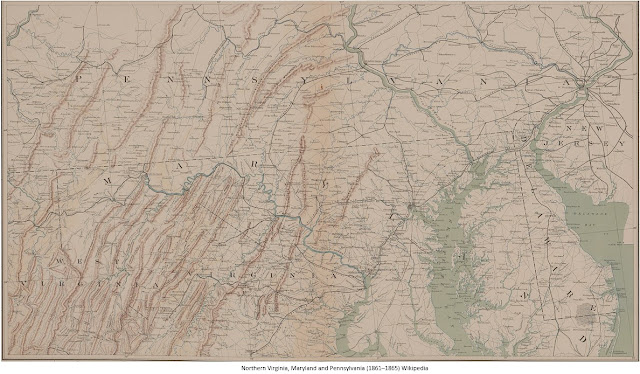 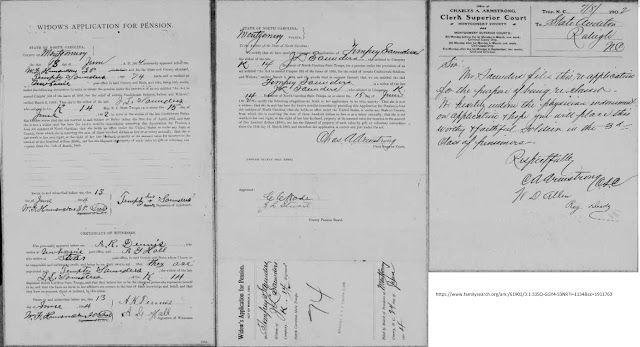 In 1864, Tempie’s father-in-law, Jacob Sanders, and my fourth great grandfather, along with Pleasant Simmons, were murdered when four deserters entered the home of Pleasant Simmons and demanded food. The deserters, after being given two hams, proceeded to break down the door to the smoke house and cut down the meat. Jacob Sanders, who was lodging for the night with the Simmons family, armed himself with a gun and went out after the robbers, but was shot and killed. Mr. Simmons was mortally wounded and died the next day. 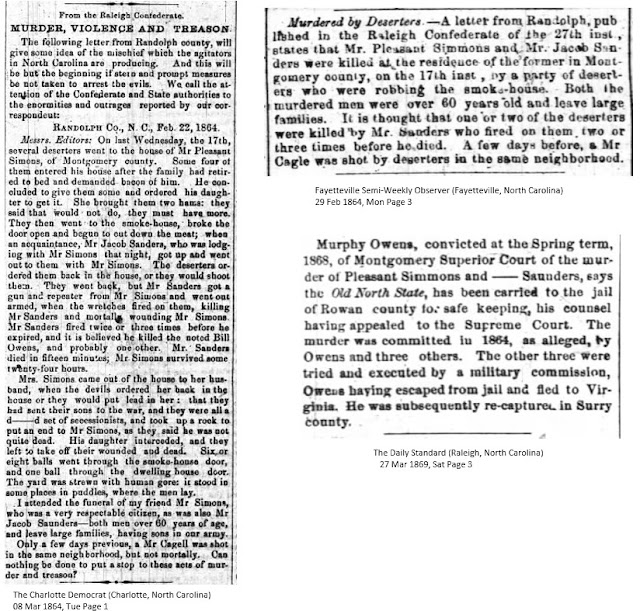 1870 shows Tempie and Jacob living in Uwharrie Township next door to N. W. (Nathan) Smart and wife Ruth. Emsley, age 12, is going by his middle name, Harris. Elizabeth (9), Berry (6) and Eliza (4) have been added to the family between the Census years.

As noted in a previous Blog, Nathan Smart is believed to be the brother of my fourth great grandmother, Susannah Smart Morgan Henderson. Nathan’s daughter, Mary, has been mistakenly identified as the wife of Mark Dennis for years, she is the wife of Martin Laton, who was killed in the Civil War. To my knowledge, Mary Smart Laton never had children. 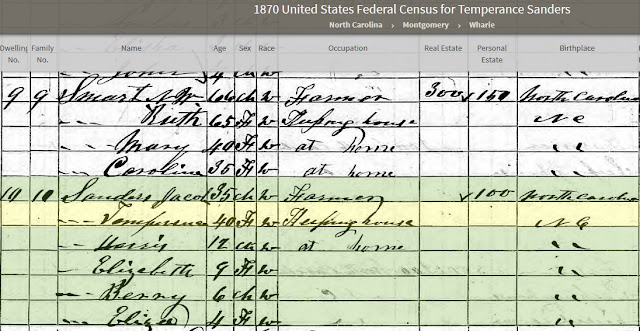 Jacob died on 26 Mar 1904 and buried in Zoar Cemetery located on Ophir Road in Ophir Township, Montgomery County, North Carolina, with some graves dating back to the 1820s. 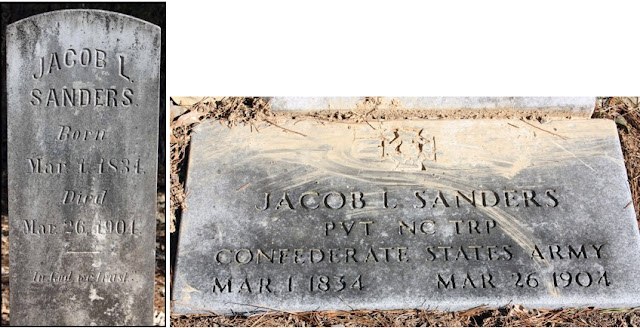 1910 shows Tempie in the home of her daughter, Caroline, and son-in-law, Enoch Dennis. She is listed as 80 years of age and a widow. For the first time, her father’s place of birth is listed as North Carolina rather than Virginia.