A year ago, I wrote about John Stewart and Rachel Morgan, daughter of Charles Morgan from Chatham County, North Carolina. Shortly after the Revolutionary War, John and Rachel migrated to Montgomery County, North Carolina; where in 1833, John filed for a pension transfer to McNairy County, Tennessee where some of his children had migrated. From John’s pension transfer file, I learned that he had an older sister named Elizabeth Russell who was interviewed by Hardy Morgan, the acting Justice of the Peace who handled the transfer for John. I have since found that Elizabeth Russell, and her sister, Barbara, provided statements in another Revolutionary War file for Edward Brewer. 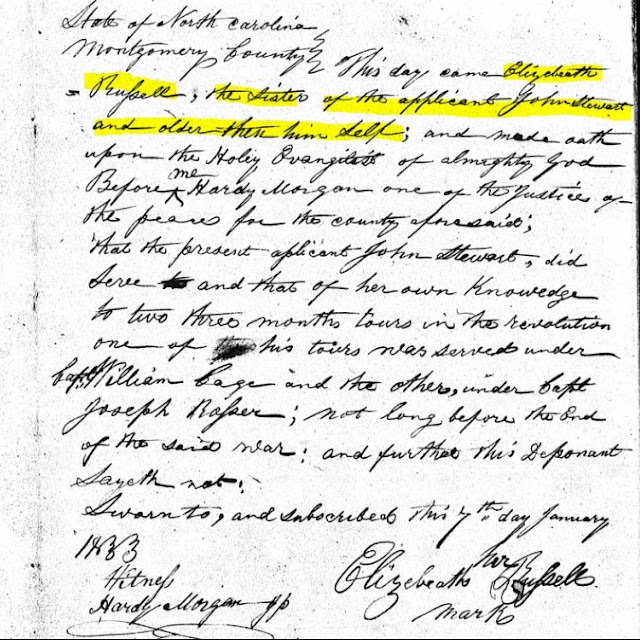 Recently, while reading through Revolutionary War pension files, I came across a file belonging to Edward Brewer, age 72, who, in 1834, resided in Randolph County, North Carolina, and appeared before Justice of the Peace, William Hannah, to apply for the benefit of the provision made by the act of Congress passed 7 Jun 1832.

Born 19 Oct 1762 in the county of Chatham, actually Orange as Chatham was formed from Orange in 1771, Edward entered the service of the United States in 1778 as a volunteer. He was sixteen years of age. He marched from Chatham Court House to Cane Creek near Lindley Mills in Orange County (now in Alamance County). Here, Edward Brewer states his company met 500 to 600 Tories under the command of ‘Fannon’ (Fanning) at which time a battle was engaged and about 70 Tories were killed, but the Whigs retreated as they were outnumbered. This battle became known as the Battle of Lindley’s Mill.

The Battle of Lindley's Mill (also known as the Battle of Cane Creek) took place in Orange County, North Carolina (now in Alamance County), on September 13, 1781, during the American Revolutionary War. The battle took its name from a mill that sat at the site of the battle on Cane Creek, which sat along a road connecting what was then the temporary state capital, Hillsborough, with Wilmington, North Carolina.

On September 12, 1781, loyalist militia under the command of militia colonels David Fanning and Hector McNeill captured Governor Thomas Burke and thirteen high-ranking Whig officials in a daylight raid on Hillsborough. The captured officials were to be transported down the road to Wilmington where they would be turned over to the British Army. Brigadier General John Butler, whose home was located nearby, and 300 patriot militiamen of the Hillsborough District Brigade set an ambush at Lindley’s Mill the next day.

Lindley's Mill was located on Cane Creek, a tributary of the Haw River. Upon the Loyalist approach, the Patriot militia sprung their trap, surprising Fanning and his men. The loyalist forces were forced to ford Cane Creek in order to assault the patriot positions, which were on a plateau overlooking the creek. The elderly Hector McNeill, the commander of a unit of loyal Highlanders, was cut down early in the battle, leading the vanguard of Fanning's militia across the creek. The British failed to gain any ground against the Patriot position until Fanning and a larger company forded the creek upstream from Butler's position, and attacked the Patriot militia from their flank. This put the militia on the defensive, and the battle persisted for four hours until eventually Butler felt compelled to order his men to retreat due to casualties. In spite of Butler's order, a contingent of men attempted to continue holding their ground, but they were ultimately dislodged by Fanning. (https://en.wikipedia.org/wiki/Battle_of_Lindley%27s_Mill) 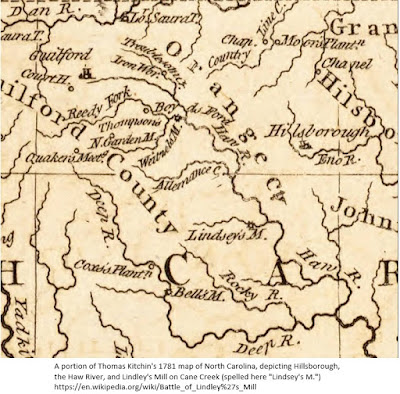 After the battle, Edward Brewer marched back to Chatham Court House where he was sent by Capt. Duglas over Haw River to purchase horseshoes. Upon returning, he received a discharge from Capt. Duglas for a tour of three months.

Brewer again entered into Light Horseman under Genl. Ambrose Ramsay and for two months marched through Chatham and surrounding counties in search of Tories. At the expiration of his service, he received a discharge from Capt. William Griffin and returned home, to Chatham County, eight miles from the Court House. 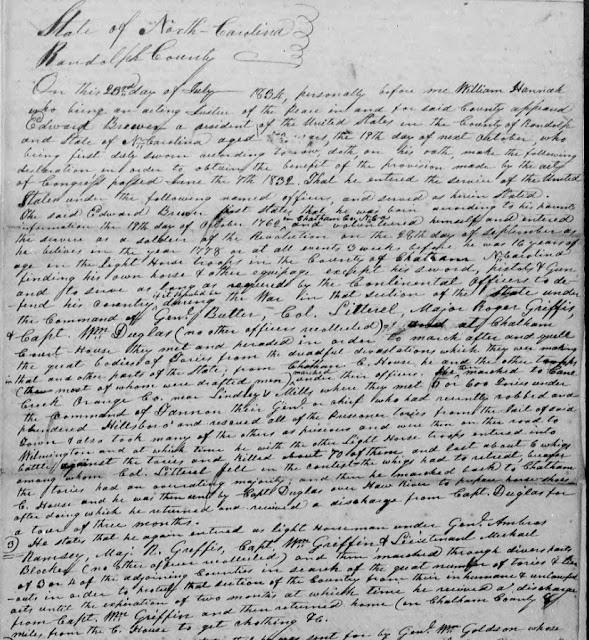 Edward states that he was then sent for by Genl. William Goldson, whose orders he obeyed, and entered the service again at Chatham Court House where he traveled up and down Deep and Haw Rivers in pursuit of the enemy. He received a discharge and returned home.

Again, he received orders from Genl. William Goldson, whose mandate he obeyed, and joined troops at Chatham Court House. He marched about several places guarding and defending that section of the state against those who were against American Independence. After three months, he received another discharge.

When the Tories broke out again at Deep River, Edward Brewer received orders from Genl. William Goldson, and again the youngster obeyed the orders. He marched in and through the counties of Chatham, Orange, Wake, Moore and Randolph expelling the Tories from those parts of the state. At the end of another three months, he received his discharge and returned home.

Sometime later a ban of Tories marched from Virginia to Chatham County and Edward Brewer received orders from Genl. William Goldson via his cousin, William Smith, to join himself to those troops of foot soldiers which he had also done at his Uncle, Henry Brewer’s old place. He marched with them through different sections of several counties for two months. He received a discharge from Capt. Trouton and returned home, 8 miles from Chatham Court House.

In all, Edward Brewer served 25 months service between the ages of 16 and 20 years. After peace had been attained, one Frances Irvin, a Captain of the Tories who had served with Fanning, returned to his settlement and was caught and hung on a walnut tree for his notorious and outrageous conduct as a Tory.

Edward served with John Stewart, Julius Riddle, William Russell, John Russell, James Russell, Richard Riddle, Joseph Stewart, Richard Arrington and others. After the war, Edward went to Sampson County, North Carolina and there was married and resided three years. He moved back to Chatham County for 5 years then moved to Randolph County, some 25 or 30 miles from the court house in Asheboro, where he had resided for 39 years. Edward kept his discharge papers until he had a family of children. When his children went to school, he gave the papers to them to use as thumb papers. 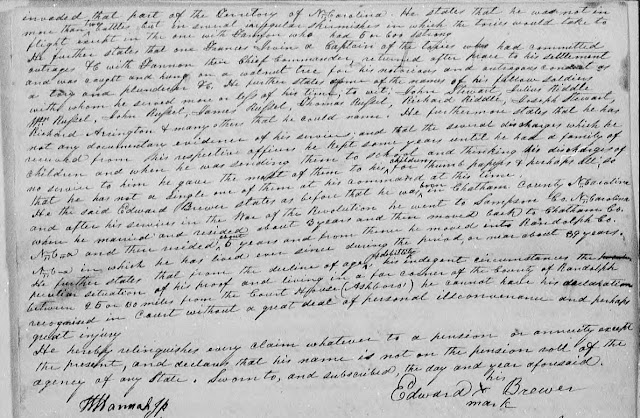 Elizabeth Russell of the county of Randolph and Barbara Russell of the county of Montgomery, both sisters and married two brothers, certified that they were born and raised in the neighborhood and resided by Edward Brewer and that he was a soldier of the Revolution in the Light Horse Troops in the Whig party. The sisters state that Edward Brewer was one of the soldiers who stayed with his officers and fellow troops near their father’s house on the public road in Chatham County. The sisters certify that their husbands, William Russell and John Russell, who are now dead, served with Edward Brewer and that they had heard their husbands talk about their service together many times. 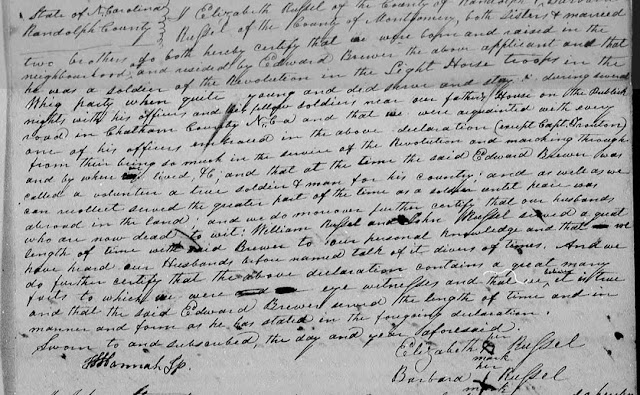 John Stewart, of the county of Montgomery, certified that he served with Edward Brewer for 3 months, under Capt. Duglas, in the war of the Revolution.

Sadly, Edward Brewer's claim was not allowed for the reason that he did not perform six months actual military service in a regularly embodied corps, as required by the Act of June 7, 1832 under which he applied. 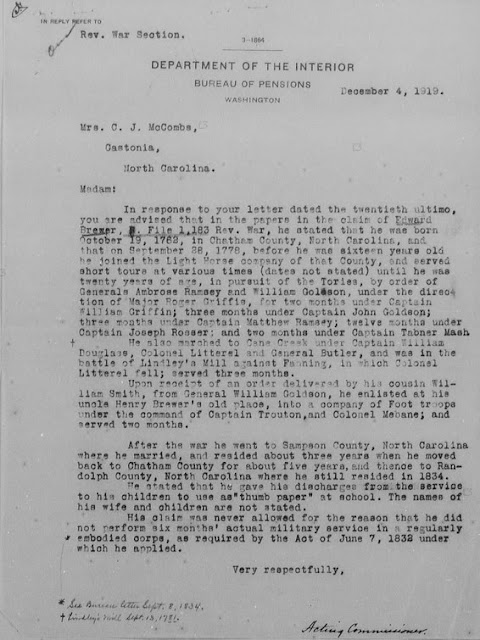 My research has brought me to believe that there is a connection between the families that resided in the northern section of Montgomery and the southern section of Randolph, with paper trails connecting the Morgan’s, Stewart’s, and Brewer’s back to Chatham County. These families all intermarried with one another from before the Revolutionary War to well into the 1830s and some of them left the counties together in the late 1830s to early 1840s and migrated to Tennessee and Mississippi. 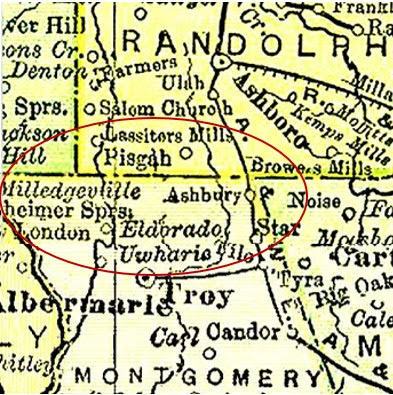 Although Edward Brewer did not receive the recognition he deserved by the Congress of the United States in 1834, this Blog will recognize him as the brave hero he surely was. 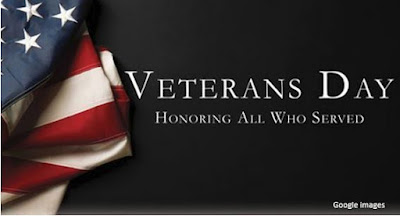