Diza, my third great aunt and the tenth child born to John Jacky and Amelia Morris, is probably the most secretive of all my known ancestors, even more so than her brother, Berry. I have spent months looking for information on her and have found next to nothing. Other than a Census record, a marriage license and a death certificate, there is nothing to know about Diza. Perhaps she wanted it that way.

Diza graces the 1840 Census for Montgomery County, North Carolina living East of the Pee Dee and Yadkin River. She is clumped in together with her sisters, Tempie and Caroline, all girls between the ages of 5 thru 9. Diza is thought to have been born around 1832, so she is about 7 years old in 1840. 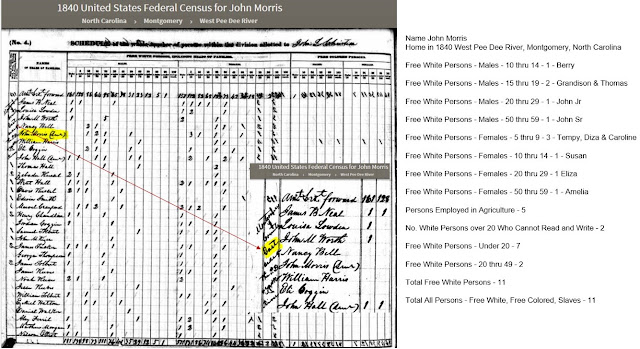 In 1850, Diza is listed as 18 years old, living with her parents, John and Amelia and two sisters, Tempie and Caroline. John, listed as a miner, works in the area gold mines to support his family. He is my third great grandfather and is consistent with his birthplace of Virginia. Amelia is listed as age 60 and born in North Carolina. I have seen records listing her born in both North Carolina and Virginia. I still do not know her maiden name nor have I been able to narrow down her birthplace as Virginia or North Carolina.

Diza was the only child of John and Amelia to live long enough to obtain a death certificate, and, just my luck, the informant got the information wrong! A. J. Lucas, who is most likely the stepson of Diza, listed her brother, Wattie, as her father and No Information for her mother. 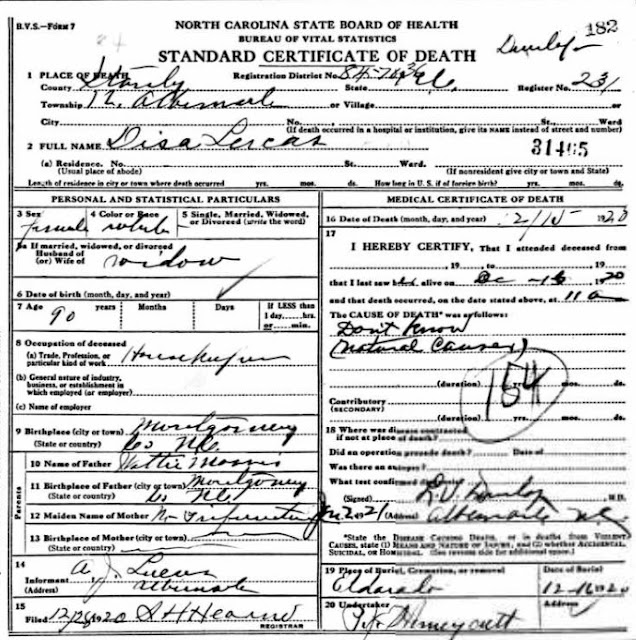 1860 is a bit confusing as the Census lists Eliza in the home of John and Amelia. While they do have a daughter named Eliza, she is listed on the 1860 Census with her husband, Pinkney Shaw. The age shown, 21, does not match to either Eliza or Diza and sometimes I wonder if 10-year-old, Joseph Morgan, the son of Samuel and Susan Morris Morgan and grandson of John and Amelia, gave the Census taker the info on who lived in this home. This could be either Diza or Eliza, I suppose.

1870 seems to be the Census year where my family does not exist. John, Amelia and Diza were either missed on this Census or they were out of the area. I have scoured every 1870 Census in four counties, and they are not to be found.

John and Amelia died in 1874 and this found 47-year-old Diza alone. Up until then, she had always resided with her parents. In 1880, she is found living between her brother William and sister, Eliza Morris Shaw in Uwharrie Township.

The 1890 Census burned in a fire and is a great loss to researchers.

On 4 May 1900, J. M. Clodfelter, most likely John Milton, whose mother is Liza Morris, daughter of John Morris Jr, Diza’s brother, applies for a marriage license for Thomas Lucas and Diza Morris, both 65 years of age. The couple were wed two days later in Uwharrie. 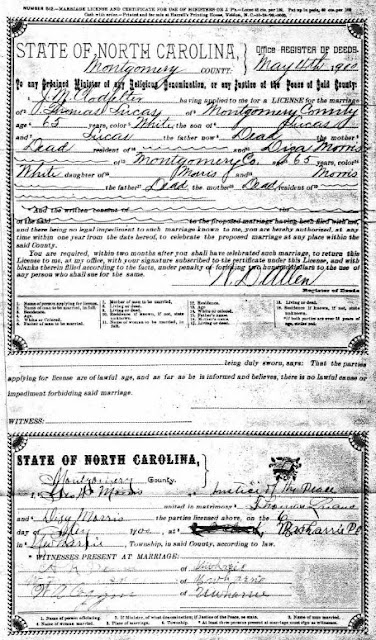 On the 13th day of June 1900, the Census taker notates Thomas and Diza Lucas living together as man and wife. Diza is listed as having had no children. Father’s place of birth is listed as North Carolina, probably because Thomas does not know that his father-in-law was born in Virginia. 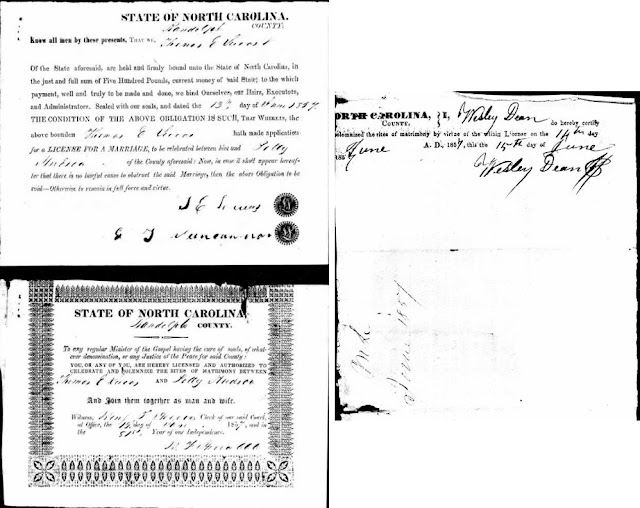 In 1905, at the age of 71, Thomas Lucas was apprehended by Deputy Sheriff J. R. McKenzie and charged with violating the Watts Law, which was an Act prohibiting the manufacture and sale of spirituous liquors except in incorporated towns. I have not been able to find any more information on what happened to Thomas Lucas, if he went to jail or not and where did he die and the whereabouts of his burial. 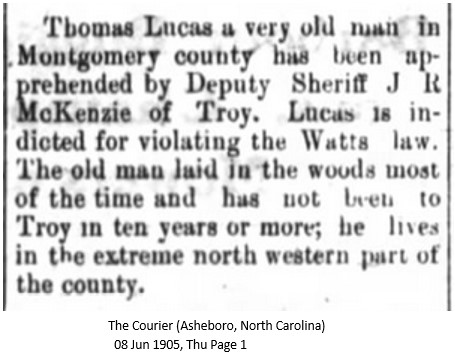 Diza, as noted earlier, was the longest-lived child of John and Amelia Morris. She died 15 Dec 1920 and is buried in Eldorado Baptist Church Cemetery in the Eldorado Community of Montgomery County, North Carolina.

Posted by Uwharrie Roots at 6:36 PM