Caroline Rhoda, daughter of John Jacky Morris – full circle back to the Morgan’s

It was my hope by writing about all the children of John Jacky Morris that I would find some scrap of documentation that would allow me to connect with another Morris family and I could finally identify the parents of John Jacky, my third great grandfather. I have come to the last child of John Jacky Morris, Caroline Rhoda, and that hope has been dashed. While I have not discovered much of anything new about John Jacky, I have come full circle back to the Morgan’s. Hang on tight, because this blog is going to be a doozy of a read as I explain how Caroline, and her sister, Susan, just keep leading me in circles around the Morgan’s.

Caroline Rhoda (I’ve also seen her name as Carolina) was the youngest child of John Jacky and Amelia Morris. She was born in 1834, most likely in the Uwharrie area of Montgomery County, and at a time when a lot of families in this area were migrating south and west as new land was opening for settlement. Caroline made the 1840 Census, a female between the ages of 5 thru 9, along with her sisters, Tempy and Diza. 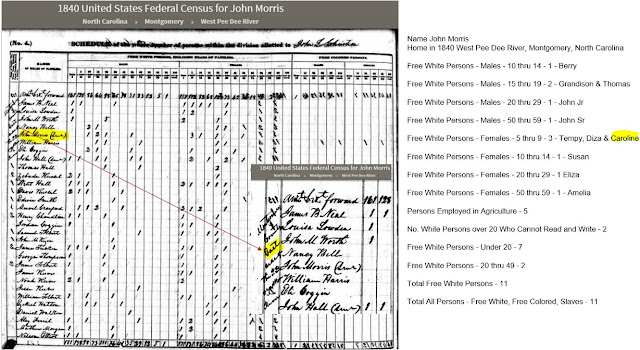 By 1850, Caroline is one of three children remaining at home with her parents. Living between her sister, Susan Morgan, who married Samuel Morgan, and her brothers, Thomas and John Jr, she is listed as age 15.

Caroline married James Kearns (also seen as Keerans) from Randolph County, between 1851 and 1854. I have not, to date, been able to find a marriage license for them. It gets a bit interesting from here, so, hang on while I try to explain my way through this maze of family connections in a way that makes sense. 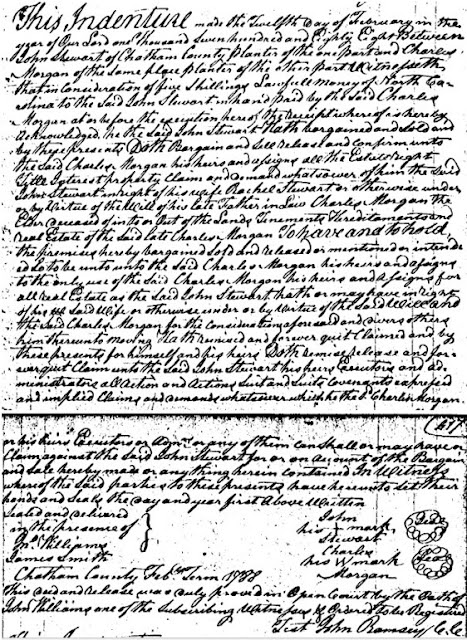 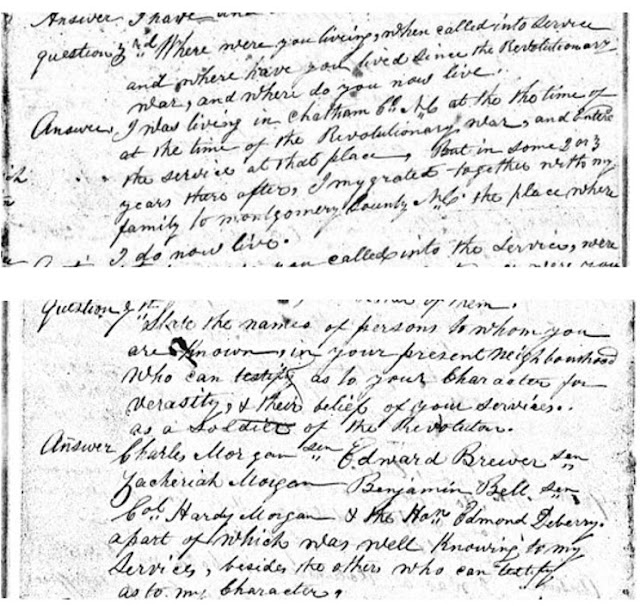 But that is not all. John’s sisters, Elizabeth and Barbara, provided statements as well. These two sisters married brothers, John and William Russell. Elizabeth made her home in Randolph County, while her sister Barbara, resided in Montgomery County as noted in the document. Elizabeth and Barbara note in their statement, that during the Revolutionary War, they lived with their father, on the public road, in Chatham County and Chatham land records show that the Morgan, Stewart and Brewer families all lived around the Dry Creek area on Haw River. 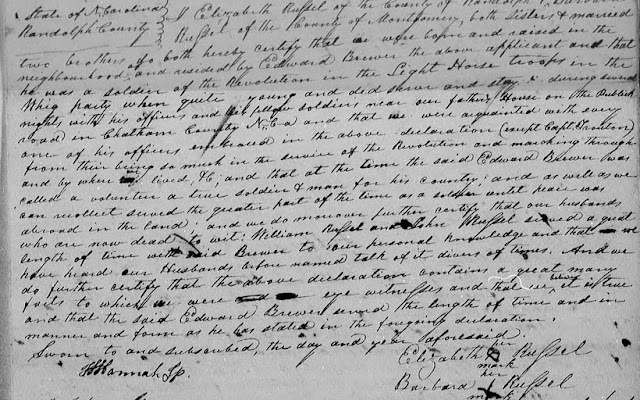 Deed book J, page 41 records a 1797 deed from Charles Morgan of Chatham County to Alston Jones, of Orange County, for 100 pounds money, on the north side of Haw River, beginning at a stake on the bank of the river in Oliver Brewer’s line, running east with Brewer’s line and crossing the first prong, 119 acres. Witnesses: Thomas Snipes and George Blalock.

Oliver Brewer is the father of Edward Brewer, mentioned above, who moved to Randolph County, and the same man whom John Stewart and his sister’s, Elizabeth and Barbara, testified to his, Edward Brewer, character in his Revolutionary War file. 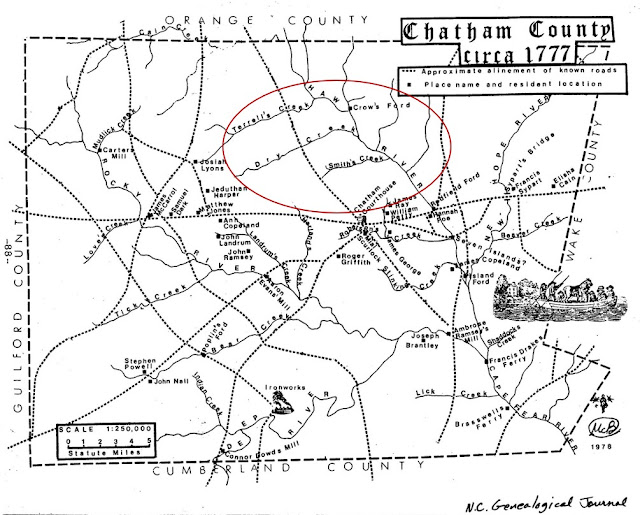 Zachariah Morgan and William Morgan are the brothers of Charles Morgan and are both named, along with Charles, in the will of Charles Morgan Senior who died in 1787. This brings up an interesting discussion on who exactly the Zachariah Morgan is in Montgomery County. He, Zachariah, testified in John Stewart’s Revolutionary War file that he was born in Chatham County and was 12 or 13 years old at the close of the Revolutionary War, this makes him born around 1770. Charles Morgan’s 1787 will does mention a son named Zachariah and I wonder if he is Charles and Rachel Morgan’s brother and brother-in-law to John Stewart. The ages certainly would be close enough for them to be siblings.

I know for sure that, prior to 1809, there was a Zachariah Morgan who lived in Montgomery County on the road leading from Fisher’s ferry to Fayetteville; joining the land of Andrew Dennis, my forth-great grandfather. Andrew Dennis lived on Cedar Creek, (and the same area where John Jacky Morris lived), current day River Road area and had a son named James, who married Mary Morgan. As noted previously, it is not a stretch of the imagination to think that James Dennis married the girl next door. It is very possible that Mary is Zachariah Morgan’s daughter, although she has been attached to my fourth great grandfather, Joseph Morgan, I have shown in a previous blog why I think this is in error. 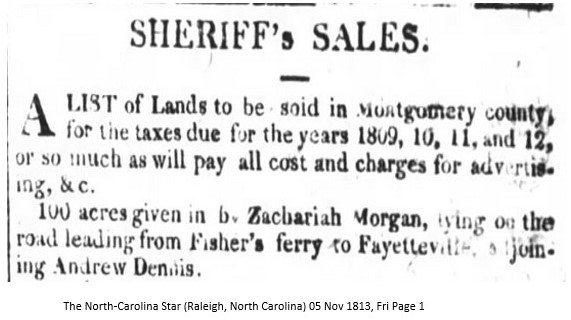 The Hardy Morgan who ended up in Montgomery County, married Nancy Hearn in 1807, per the Fold3 widow pension file for Nancy. Both Hardy and Charles are found on the 1810 Census for Hattom, Montgomery, North Carolina. Hardy is listed as a young man with a wife and one small child while Charles is listed as a male over the age of 45, making him born before 1765. The 1830 Census shows Charles East of Pee Dee and Yadkin River, Montgomery, North Carolina, listing him between the ages of 70 thru 79, making him born about 1755. This puts Charles Senior, who died in Chatham County in 1787, being born about 1735.

The internet research that I am working from and attempting to prove (or disprove), seems to be missing a generation. There are three Charles Morgan’s, not two. The first Charles, born about 1735 and dying in 1787, Chatham County, the second one born about 1755 and migrating to Montgomery County after 1802, and the third Charles Morgan being born about 1788, who is the father of Spencer Morgan, Willis Morgan and Henry Morgan, as proven in the Crump v. Morgan court papers. This Charles Morgan married a woman named Delilah, who is reputed to be a Stewart, although I have found no evidence to support that claim.

Although I have no proven documentation, the third Charles Morgan is most likely the brother of Hardy Morgan, who married Nancy Hearn, and my fourth great grandfather, Joseph Morgan. Y-DNA testing has confirmed that Willis Morgan descendants and Joseph Morgan descendants are of the same Morgan family. I am almost positive that Charles Morgan, the father of Willis Morgan, and Joseph Morgan, my fourth great grandfather, are brothers, based on Y-DNA and atDNA testing. I am on the hunt for a male descendant of Hardy Morgan to Y-DNA test.

Caroline’s own sister, Susan, married Samuel Morgan, whom is reported to be the son of Spencer Morgan and Elizabeth Tolbert (also seen as Talbert) from Montgomery County. Spencer is most likely the son of Charles Morgan II (b. ~1755 d. aft 1830) and brother to Hardy, Charles, and Joseph. Spencer and his family left Montgomery in the Fall of 1845 for Christian County, Kentucky. Family lore says that Samuel, being in love with Susan, came back to Montgomery County, North Carolina to marry her. I cannot help but wonder if Susan had some involvement in the meeting of Caroline and James Kearns. I am on the hunt also for a male descendant of Spencer Morgan to Y-DNA test.

Also, of interest is the Hall family who migrated from Randolph County to Montgomery County in 1840. On the 2nd day of March 1840, E.F. Morgan, of the county of Montgomery, sold to John Hall, of the county of Randolph, for the sum of $725, and lying on the east bank of Barnes Creek, land that included a Grist Mill and a Saw Mill. Two other tracts of land, known to many as the McCulloch tract and Spencer tract, sold to John Hall at this same time. 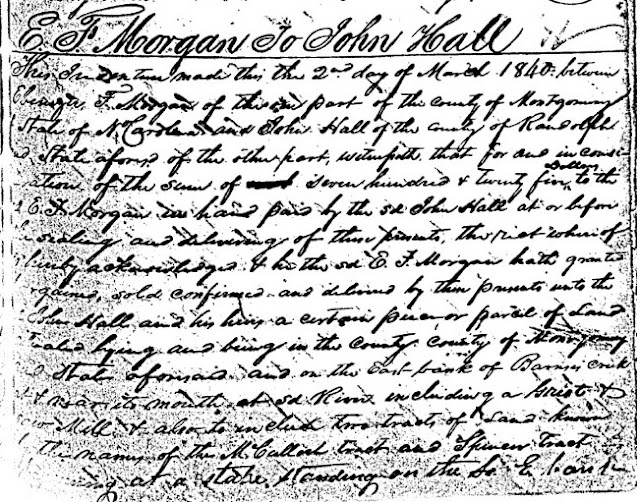 James Kearns, who married my third great aunt, Caroline Morris, is the son of Hubbard Kearns and Nancy Hall, who just happens to be the sister of the John Hall who bought the tract of land and the mills from Ebenezer Franklin Morgan in 1840.

I just keep coming full circle back to the Morgan’s. And it gets better…

On 2 Jul 1860, James Kearns, listed as a Carpenter, is found in the home of Bethel Beckerdite, probably just doing some carpentry work for the Beckerdite family on the same day the Census taker came around. Of interest, Bethel Beckerdite is the brother of Amos Beckerdite, whose son, Colin Beckerdite, married Caroline Morgan, the daughter of Hardy Morgan and Nancy Hearn.

1870 finds the Kearns family in New Hope, Randolph County, which looks to just be a name change from Western Division as the area was called in 1860. As seemed to be the popular thing, the family is listed by initials only. Notice that James’s occupation has changed from Carpenter to Miller and Sallie, who was 3 months old in 1860 is no longer listed. She has either died, or M.M., who is Martinia Minerva, has taken her place, so, Martinia was either called Sallie or Sallie died young. Martinia will marry Howard Surratt, son of George and Martha Badget Surratt in 1881.

Also listed on this Census is S.C Kearns, age 5. I have yet to discover who this child is and what happened to her. B.P, Burl Pinkney is listed as age 2. 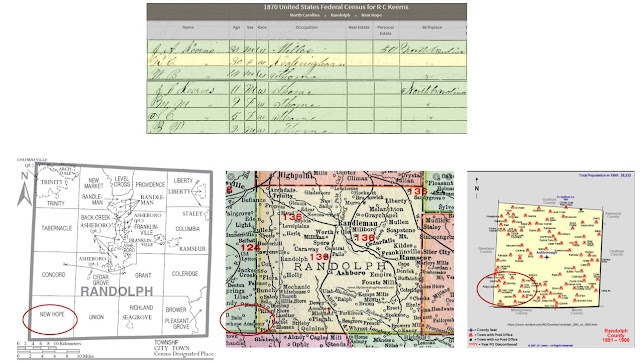 1880 shows Caroline and family still living in New Hope, Randolph County. We see on this Census that William and John are no longer living at home. They have married and William makes his home in Stanly County and John still resides in Randolph County. Martinia and Burl (married Mary Ferrell) are still at home and the S.C. that was listed in 1870 has been changed to Electa (marries Thomas Forest). Mandy (marries Ben Tysinger), Isaac (married Martha Lomax) and Arthur (marries Mary Ellen Beck) have been added to the family during the Census years.

As we (hopefully) all know by now, the 1890 Census has been lost due to fire. In 1900, the Kearns family have moved to Alleghany, Davidson County. The only child living at home is Arthur, his wife, Mary Ellen is also living in the home. Notice that Caroline has listed she has given birth to nine children but only eight are currently living in 1900, so, perhaps, Sallie, listed as three months on the 1860 Census died young. Mary Ellen also lists one child living, but this child is not listed on the Census. I assume it is Floyd Kearns, who was born 1 May 1900, one month prior to the Census being enumerated.

Caroline Rhoda Morris Kearns, my third great Aunt, who leaves a tantalizing historical record for me to continue to search and discover even more connections, died in Sep 1906, at the age of 72. She is buried at Pine Hill United Methodist Church Cemetery in Denton, Davidson County. 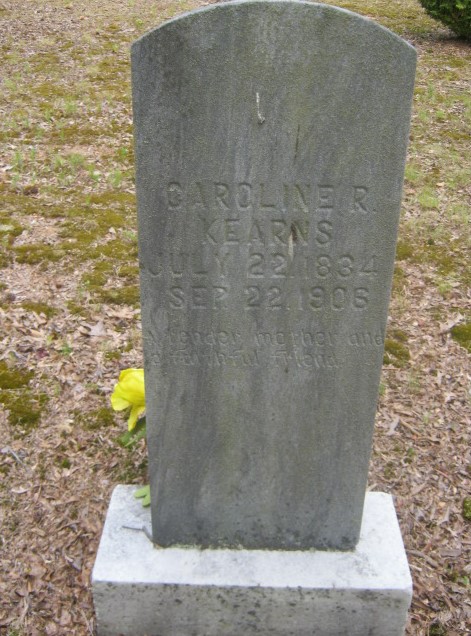 Posted by Uwharrie Roots at 3:13 PM