So, I started over with atDNA matches to see if I had missed anything. Going back through more than twenty family trees that listed Alston Morgan (most having his parents listed as William Morgan and Martha Reeder), I found one lone tree connected to an account of a DNA match for my cousin who had an Anderson Morgan born about 1783 in Chatham County, North Carolina in his tree and listed as Anderson's son was Alston Morgan. Listed as Alston Morgan's wife is Ann Edwards whose family is from Chatham County, North Carolina. Attached to this family tree I found the Alston Morgan Story written by a descendant of the Edwards family.

The Alston Morgan Story
This is the story of Alston Morgan. It begins in Chatham County, North Carolina where Alston was born in 1803. His father Anderson Morgan served in the North Carolina Milia during the War of 1812, and was awarded a land grant on Hurricane Creek in Wilson County, Tennessee. Anderson was present on his land grant in the 1820 census. It was noted that he lived among several Edwardses, some of whom were from Chatham County, and were likely old friends. Anderson disappeared from the records afer the 1820 census, and is assumed to have died. He was replaced at that location by Alston Morgan.
Some genealogists may have picked a different father for Alston. But Anderson Morgan was the only Morgan on Hurricane Creek in early Wilson County, and was at the correct location in the censuses to be Alston's father. Anderson Morgan is the only feasible Morgan for the father of Alston Morgan.

Alston has been confused with Moses A Morgan, of Bedford County. It is not known if the two are related.

Alston is a surname, and there were Alstons in Wilson County. A guess is that Anderson Morgan's wife was an Alston.

There is a Wilson County marriage record for Alston Morgan to Ann Edwards, in January 1820. The bondsman for the marriage was Eaton Edwards. Eaton was the son of John Edwards, formerly of Chatham County, NC. This marriage record is the only record in the lifetime of Ann Edwards. She was not even in the census enumerations for anyone. But Ann gave the gift of life to five children, and passed on her DNA. That DNA identified Ann as the daughter of Aaron Edwards, of Chatham County, NC and Hurricane Creek in Wilson County, TN. Ann and Alston were neighbors before they were married. Ann died in or about 1839, as indicated by Alston's remarriage to Julie Ann Abernathy in 1840. Ann and Alston had the following children:
unknown 1820-1828
Charles A Morgan 1828
William Newton Morgan 1829
Jasper R Morgan 1830
Robert W Morgan 1834
Marion Morgan 1836

Aaron Edwards, formerly of Chatham County, NC, sold his property in mid-1803 and moved to newly formed Wilson County, TN. He and his brothers John and Robert are listed as early settlers of Wilson County in Drakes Early History of Wilson County. At the time of his move, Aaron and his wife Elizabeth Hackney had two children. It is believed that Ann was born in Wilson County in about 1804.

Julia Ann was in the 1850, 1860, and 1880 censuses. In the 1880 census at age 61, she was living with her sons Joseph and James, and James' wife and children.
There is no 1890 census, and a search of 1900 censuses failed to find Julia Ann. The 1880 census was the last record in her life.
Many Ancestry family trees have different names for Alston. The only name that ever appears in his historical records is Alston Morgan. The historically correct name is Alston Morgan.
Alston died after the birth of his last child in 1858. He resided on Hurricane Creek all of his adult life. Some of the his descendants still live in the Hurricane Creek area of Wilson County, from Gladeville to present day Norene. He may be buried in one of the cemeteries with his descendants.

I was very excited to find Alston Morgan’s story as I now had a link back to Chatham County, North Carolina where it is believed my Morgan’s are from. I have been working off and on with this Edwards/Morgan descendant and learned he has done a great deal of DNA and traditional research on the Edwards family and has some good leads on the Morgan family that married into this line.

Ann Edwards's parents are Aaron Edwards and Elizabeth Hackney. Her maternal grandparents are Joseph Hackney and Nancy Stewart. The Edwards and Hackney families can be found in Chatham County land records along with the Morgan, Brewer and Stewart families in the late 1700s. The Brewer family has connections to the Stewart and Morgan families through John Stewart who married Rachel Morgan, the daughter of Charles Morgan II who died in 1787 in Chatham County, North Carolina. The Joseph Morgan listed in the Grantors section below is the son of Charles Morgan II (died in 1787) and the brother of Rachel Morgan who married John Stewart.

From there, things just began falling into place, at least with the Edwards family.

Connected to the Edwards family is the Brewer family. Two daughters of Oliver Brewer, Hannah and Rebecca, from Chatham County, married brothers, John Edwards and William Edwards. I am now researching if John and William's father is the Philip Edwards who is mentioned in the Revolutionary War pension file of John Edwards, who ended up in Jefferson County, Tennessee – the same place William Morgan and wife, Amelia Brewer (from Chatham County, North Carolina) ended up. 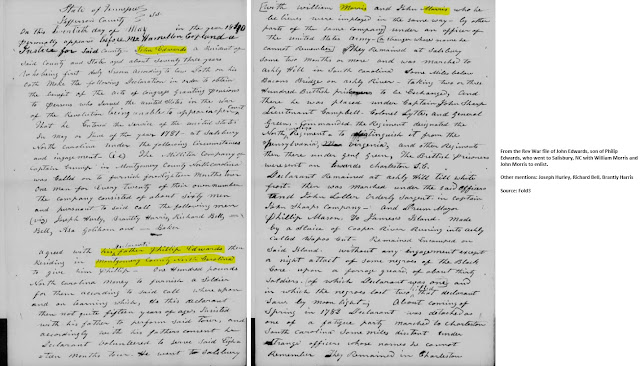 You may remember from a previous Blog post that Oliver Brewer is the father of Edward Brewer who migrated to Randolph County, North Carolina. In Edward Brewer's Revolutionary War pension file is found a statement from John Stewart and his two sisters, Barbara and Elizabeth, who married brothers John Russell and William Russell. I can't help but wonder if Nancy Stewart, who married Joseph Hackney, is a relation from a previous generation.

Philip Edwards had a land grant for 100 acres in Montgomery County, North Carolina on the waters of Uhary (Uwharrie) river beginning at ... a corner of his 50-acre tract granted to Andrew Dennis [can this mean that Andrew Dennis sold these 50 acres to Philip Edwards?] ... ran to Hardy Morgan’s line ... to John Stewarts line ... to Bunnel’s corner ... entered 16 Jul 1818 and issued 19 Dec 1820. 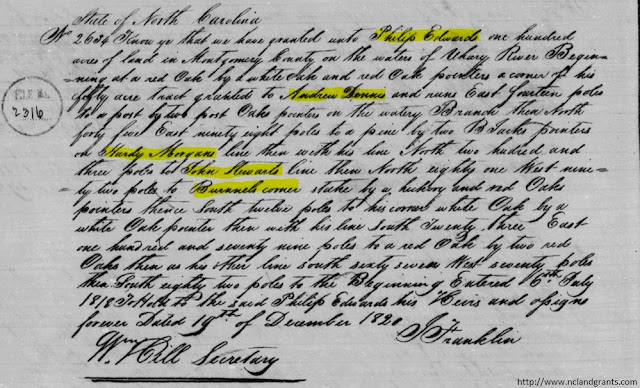 I think Andrew Dennis probably sold land to the Morgan's when they came to Montgomery County [based on the verbiage in the land grant above]. A Zachariah Morgan is noted in a Newspaper article as a neighbor of Andrew Dennis in 1813 when some of his land was sold for taxes. Zachariah Morgan provided a statement in John Stewart's Rev War file and I think Zachariah may be John's brother-in-law, sister to John's wife Rachel.

How does all this tie into my cousins Y-DNA matches?

I think it is very possible that Anderson Morgan is indeed the father of Alston Morgan and Anderson is probably the brother of my fourth great grandfather, Joseph Morgan. Anderson most likely married a daughter of one of the Edwards or Alston families, in Chatham County, North Carolina around 1800. When the Edwards’ family moved to Wilson County, Tennessee, Anderson Morgan and his wife went with them, especially since Anderson had a land grant for that place.

About the same time, Charles Morgan II sold his land in Chatham County and moved his family to Montgomery County, North Carolina where his sister Rachel Morgan Stewart was already living. Charles Morgan II is the father of Charles Morgan III who married a woman named Delilah. This couple, Charles and Delilah, are the parents of Willis Morgan who married Bethany Bailey Delamothe, the widow of Henry Delamothe Willis and Bethany migrated to Campbell County, Georgia in the 1840s. The first match listed below descends through Willis and Bethany. I think my fourth great grandfather, Joseph Morgan, may be the uncle of Willis Morgan.

I have one more match to solve. I have sent multiple emails to this match but have heard nothing back. He has Charles Morgan listed as his earliest known ancestor and I have my fingers crossed that this match is also a descendant of Charles Morgan I who died 1787 in Chatham County, North Carolina.

Posted by Uwharrie Roots at 3:23 PM