What Tales Can Pension Records Tell?

Destroyed records due to several county courthouse fires makes it challenging to research the first families of Montgomery County, North Carolina. I learned early on that Montgomery County is not one of those counties where the paper trail falls neatly into place because of plentiful records. No, Montgomery County requires one to roll up their sleeves and dig in their heels – and prepare for the hard work ahead. Research is a slow and arduous journey in counties like Montgomery where paper trails have huge gaps of time in them. On the flip side, because all these early families are so intertwined, you are sure to find, while browsing through what records are left, some tidbit of information on an ancestor – even if it is not the one you are specifically looking for.

And so, it is with Joseph Morgan, my fourth great grandfather. I must rely on others records where I might find some mention of him or at the very least, a mention of something that will help me understand the events of the day and add to my timeline for him. In other words, because he did not live long enough to accumulate a record trail, and even if he did, it was burned in the early courthouse fire, I must piece his life together based on the records of others.

Susannah Smart, my fourth great grandmother through daughter Priscilla Morgan, married twice. Her first marriage was to Joseph Morgan who died either in the War of 1812 or shortly thereafter. Regardless of what one sees in Ancestry trees or other online (or offline) family trees, message boards or printed material, only three children, and not four, were born to this marriage; Matthew (1810), Priscilla (1812) and Joseph (1814).

That fourth child I am talking about is Mary Morgan Dennis, the wife of James Dennis, who has been attached to Joseph and Susannah Smart Morgan by many researchers, but Mary Morgan Dennis is not the daughter of Joseph and Susannah. Some research I’ve read suggests that perhaps Joseph was married prior to Susannah and Mary is his daughter by a first wife, but if that is the case why is she missing on the 1810 Census with Joseph, Susannah and Matthew? And why is she missing on every Census with Susannah and her second husband, Joel Henderson? Most importantly, Mary Morgan Dennis was born about 1798; Susannah was born about 1792 and would have been 6 years old when Mary was born, so she cannot be Mary’s mother. Mary just does not fit.

Most researchers tend to think that Joseph died in the War of 1812 and I suppose, like many, he could have been exposed to any number of diseases that raged through a military camp. I tend to think, based on the available casualty list, that Joseph did not die in a battle or skirmish. The only US Service Member to die in the War of 1812 named Joseph Morgan was a Seaman (Navy) who died early in the war on 12 Dec 1812 and my Joseph Morgan was in the Militia (Army) and was home in Jan 1814, so he could not be dead in 1812.

I have tried to narrow down a death date for Joseph and the best I can come to is between Jan 1814 [after the conception of his third child] and Nov/Dec 1815 when his wife, Susannah remarried to Joel Henderson. I know Joseph was home with his wife in Jan 1814 because his son Joseph was conceived about that time and was born about ten months later in Nov 1814. I know Joseph Jr is the son of Joseph Sr because Y-DNA testing confirms this Morgan line. Yes, I know there are exceptions, I guess Joseph Jr could be the son of a brother of Joseph Sr, but I have no reason to believe that line of thinking. Autosomal DNA evidence for descendants of all three Morgan children leads me to believe that all three of the Morgan children belong to Joseph Sr because descendants of all three children sit very nicely in DNA centiMorgan ranges so let’s not create problems and complicate things by over thinking. If something makes sense and is logical, then we should just go with it unless or until evidence makes us change our minds.

A timeline of events for Joseph and Susannah is short and simple.

The two records I found of Joseph’s service are a muster card showing his rank and the company he was attached to and his pay voucher. The company muster roll has a date of Aug 1813 and the pay voucher shows that Joseph was issued pay on 7 May 1815 and states he served in Capt. Elijah Haltom’s company. The pay voucher, which looks to have been paid by a warrant [land] was claimed, that is what the hole punched through it means. I have written the National Archives and asked if they have any records on when the Warrant was claimed and by whom. If Joseph claimed the warrant, then I will know he died after the date of that claim. But, if Susannah claimed the warrant, then I will know Joseph died before the date of the claim. I hope to hear back from the National Archives soon. 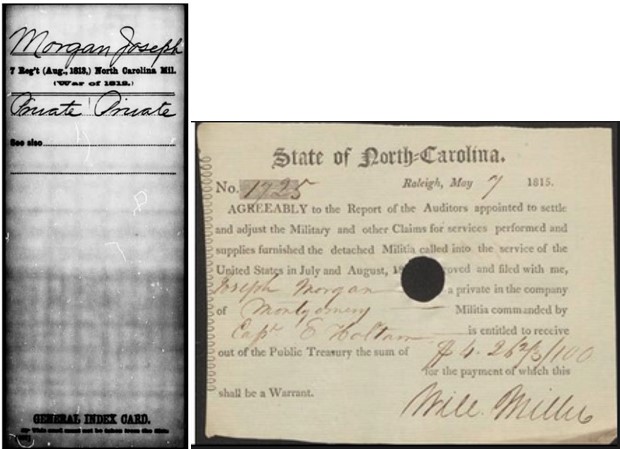 Some of the other men who served from Montgomery County lived long enough, or at least their spouses did, to claim a pension. Searching internet archives, I found a list of pay vouchers located at digital.ncdcr.gov for those who served from Montgomery County. I can cross reference these names at Fold3 to discover if any had pension files and if so, what was written in the files. All these men knew each other, they all lived at the same time, in the same county, worked together, attended church together and enlisted in the service together. Their lives are forever united by the War of 1812. 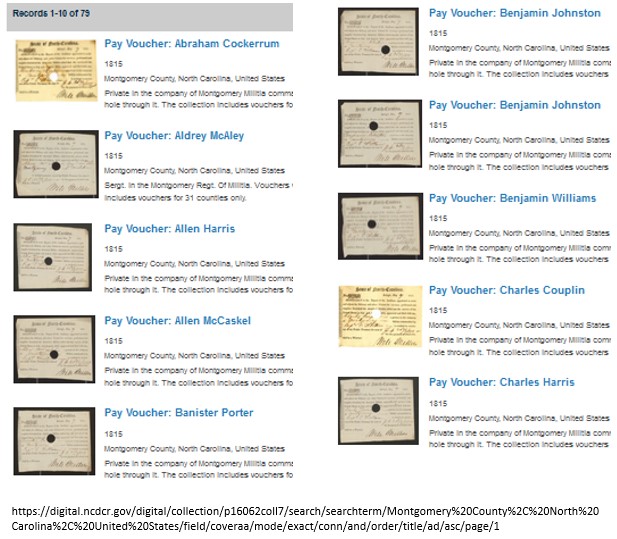 Hardy Morgan, whom I believe MAY be the brother of Joseph, served in the same company as Joseph, only for a few short weeks, per his widow’s pension file at Fold3. However, I found in the pension file of Abraham Cochran [see below] that Hardy served for a period of 6 months. Hardy and his wife, Nancy Hearne, migrated west to Pontotoc County, Mississippi and after Hardy’s death, Nancy migrated with the rest of her family to Lincoln County, Arkansas. 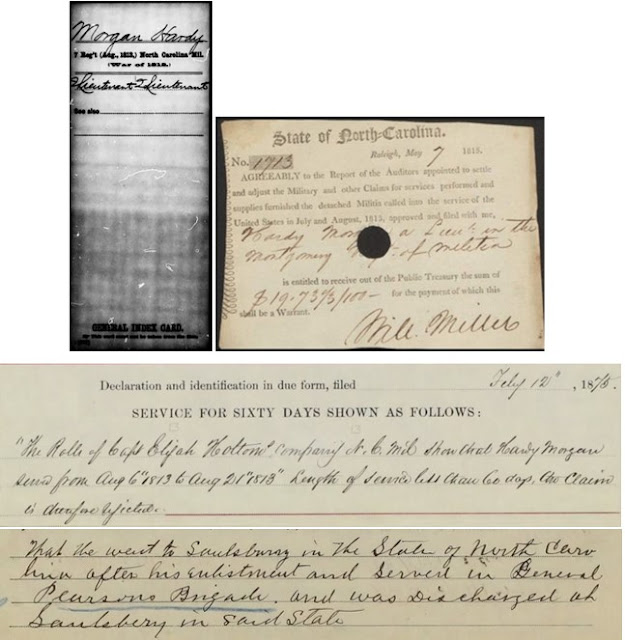 Two William Morgan’s from Montgomery County, North Carolina served in Capt. Elijah Haltom’s company. There may be a relation between the two, but it is not father and son.

One William Morgan [Jr] married a woman named Elizabeth; her maiden name is not known. This William is the father of Mary Polly Morgan who married William Hamilton. He served from 1 Feb 1814 to 15 Mar 1814 when, in his file, he is noted as dying in a camp in South Carolina from measles. Elizabeth remained his widow and raised Mary, the only heir of William Morgan [Jr], alone. 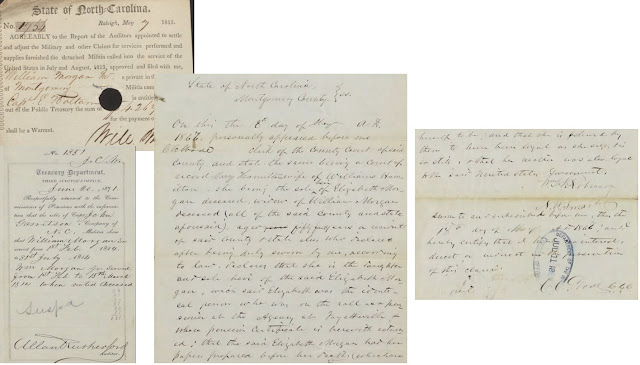 The other William Morgan [Sr] served from 1 Feb 1814 to 31 Jul 1814. He completed his tour and, along with his wife, Amelia Brewer Morgan, who was from Chatham County, North Carolina, migrated to Jefferson County, Tennessee where he lived the rest of his life. His file makes note that his first wife’s name is Nancy and she died in Montgomery County, North Carolina. 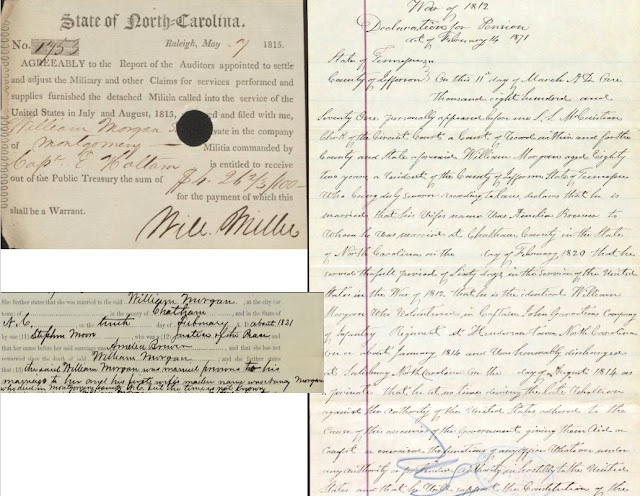 Abraham Cochran received his pay voucher on 7 May 1815, just as all the other men did. His file shows that he married Rebecca Luther in Montgomery County and this couple migrated to Georgia. My first cousin three times removed, Parsons Harris Morris, Register of Deeds in Troy at the time, responded to an inquiry about obtaining marriage records for Abraham Cochran and Hardy Morgan. 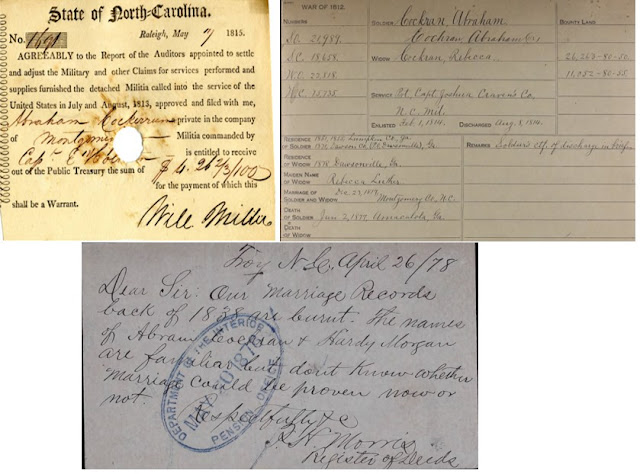 Abraham Cochran and Rebecca Luther were married in Montgomery County by Hardy Morgan, Justice of the Peace, in Dec 1817 at the house of Michael Luther, probably the father of Rebecca. Interesting note by a woman by the name of Rebecca Waters, she states that Hardy Morgan was gone for 6 months, contradicting Hardy’s own file at Fold3 that states he was gone for only 2 weeks. 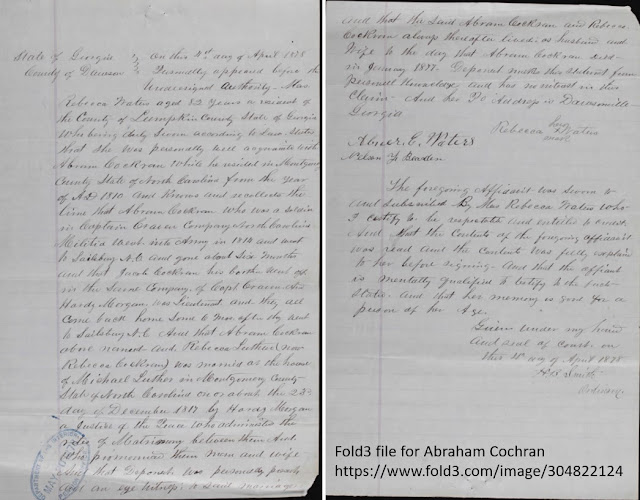 David Blalock, on the 11th day of Feb 1851 appeared before a Justice of the Peace in Stanly County, created from Montgomery County in 1841, and declared that he enlisted in the War of 1812 as a Private at Henderson, Montgomery County, about the 25th day of May 1812 for a term of two years. Two witnesses, Daniel and Martha Freeman, provided a sworn statement that they knew both David and his wife Martha before and at the time of their marriage and that Martha’s maiden name is Dennis. 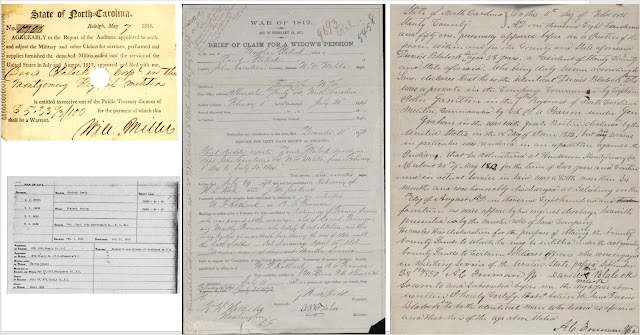 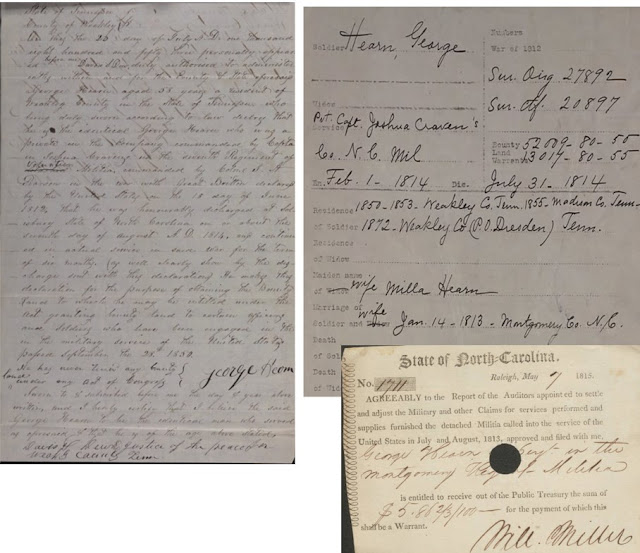 Colonel William Washington [W. W.] Harris applied for his pension in Sep 1853 in Spartanburg District, South Carolina. In his statement he claimed he enlisted in the service in Montgomery County, North Carolina for the term of 6 months. He continued in service for his full term and was discharged at Salisbury, North Carolina about Aug 1814, afterwards he migrated to South Carolina. 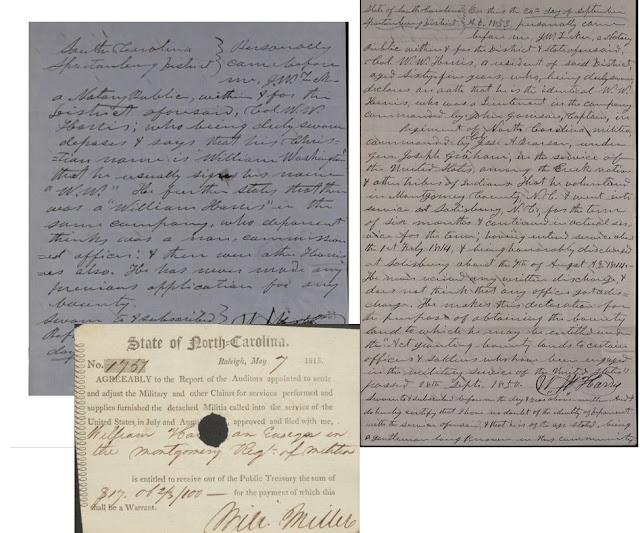 Wiley Harris enlisted as a Private in Captain Joshua Craven’s Company and Colonel Pearson’s Regiment and served from Feb 1814 to Jul 1814. His wife, Nancy Hancock Harris, daughter of Rev. John Hancock, filed for a widow’s pension in Mar 1878, Wiley died in 1869. Most interesting in this file is the confusion between brother’s, Wiley and Willis. The War Department repeatedly asked for confirmation that Wiley and Willis were not the same person. In a letter dated Jan 1879, G. W. Harris, son of Wiley and Nancy, confirms that Willis Harris was a brother to Wiley and resided in Wilson County, Tennessee. 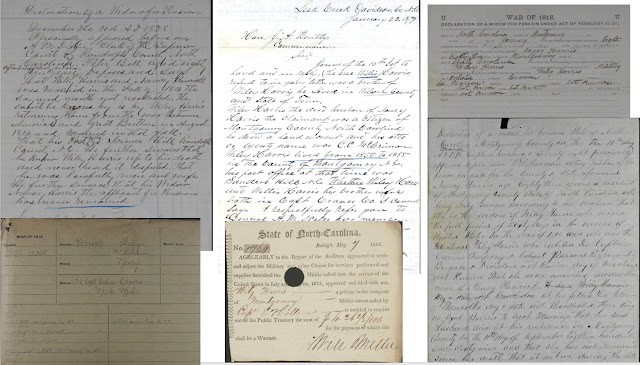 While researching pension files at Fold3, I came across Archibald Partain who claimed that he served in the War of 1812 under Captain Willis Harris, the brother of Wiley Harris. I found no payment voucher for him and his pension claim was rejected, however the genealogical treasure left in this file may have solved a mystery of what happened to Martha Harris, daughter of Charles Green Harris and Mary Hearne.

Archibald Partain states he married Martha Harris on 5 Dec 1824 in Montgomery County, North Carolina. This couple migrated to Tennessee and then to Kentucky. Of interest here is that Mary Hearne Harris had an Aunt named Dovey who married a Partin, his first name is not known, and this couple, along with brother George Hearne and Willis Harris, migrated to Wilson County, Tennessee.

There is certainly a connection here and more research is required.

These are just a few records that are available online that provide a wealth of information about the citizens who called Montgomery County, North Carolina home. While I did not find anything new on Joseph, I have found much on other ancestors and can now work to incorporate all this information into my family tree.
Posted by Uwharrie Roots at 10:45 AM