Lanes Chapel in Montgomery County is one of my favorite places to visit. The area, dotted around with big shade trees, is secluded and peaceful with hundreds of old, weathered gravestones standing as a monument to those who lived and died in Montgomery County, North Carolina.

One of the stones that recently caught my eye was that of Morning Naylor.

Find-A-Grave has a brief write up on Morning that states the following:

Morning Stoggins Naylor was the second wife of Joshua Naylor, soldier of the Revolution. On her pension application, 7 Jan 1861, Morning says her age is 96. This would give birth year of 1765. She states she married Joshua Naylor, 11 June (unreadable) in Montgomery Co. NC. 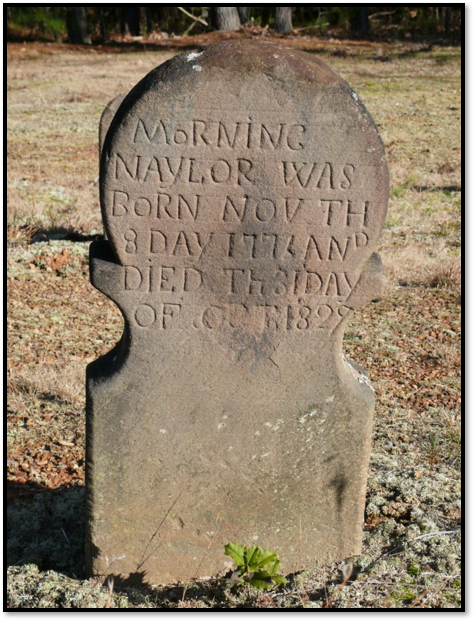 So, off I went to Fold3 to read Morning’s widow pension file to see if I could figure out when Morning actually died.

According to the widow claim file, dated 7 Jan 1861, Morning Naylor, age 96, a resident of Montgomery County, appeared before the acting Justices of the Peace in Stanly County, North Carolina, and being duly sworn according to law, on her oath made a declaration in order to obtain the benefit of the provision made by the act of Congress passed 7 Jul 1838 that would entitle her to obtain half pay and pensions to certain widows whose husbands had served in the Revolutionary War.

That she is the widow of Joshua Naylor who was a soldier of the Revolutionary War who was allowed a pension by the United States of the 18 March 1818 and 1 May 1820 at the rate of eight dollars per month to commence on the 4 July 1820 and he drew his said pension until the year 1835. 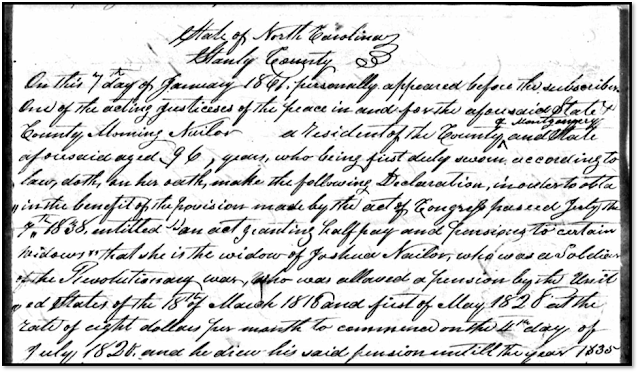 She further declares she and Joshua Naylor were married in the state of North Carolina in the county of Montgomery on 11 Jun 1782 and her husband, the said Joshua Naylor died in the county of Montgomery state of North Carolina on 24 Jun 1835 and that she has not intermarried since the death of her husband said Joshua Naylor and is his widow. That she was not married to him prior to his leaving the service but the marriage took place previous to 1 Jan 1794. 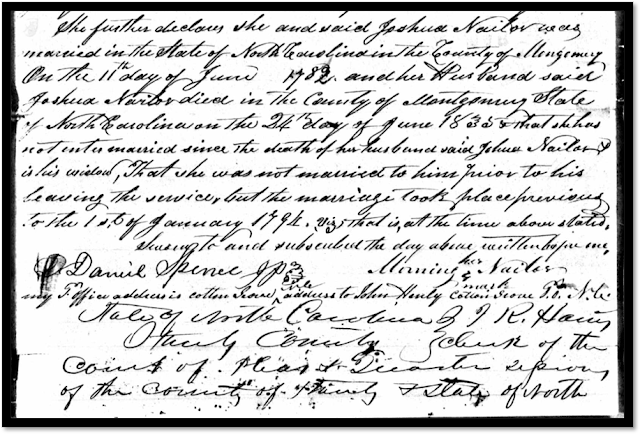 The Original Claim of Joshua Naylor

On 4 Jul 1820 personally appeared in open court, being a court of record for the county of Montgomery, Joshua Naylor, aged sixty four years who being first duly sworn according to law doth on his oath make the following declaration in order to obtain the provision made by acts of congress 18 Mar 1818 and 1 May 1820. 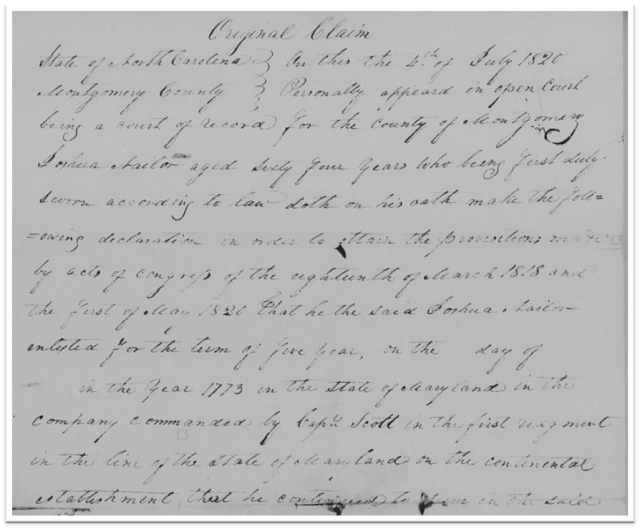 That he continued to serve in the said corps until the expiration of the term when he was discharged from the service in the state of Maryland in Prince George County. That he was in the battles of Long Island, York Island, White Plains, Age hill (probably Edge Hill), Chestnut Hill, the taking of Stony Point, and Monmouth courthouse.

And in pursuance of the act of 1 May 1820, I do solemnly swear of affirm as the case may be that I was a resident citizen of the United States on the eighteenth day of March one thousand eight hundred and eighteen and that I have not since that time by gift sale or any manner disposed of my property or any part thereof with intent thereby so to diminish it as to bring myself within the provisions of an act of congress. 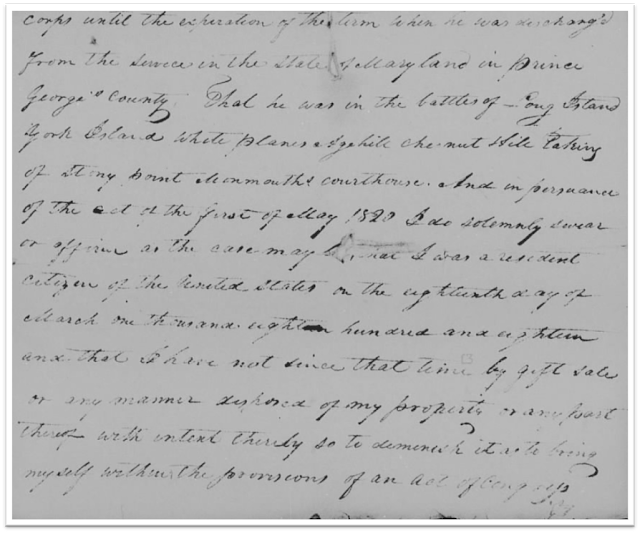 Balance of property is not worth more than 20 dollars. My family consists of myself, wife, and seven children (later records say five children).

The applicant could not have enlisted in 1773 as the war commenced in 1775. The times of entering and leaving the service and term of enlistment should be particularly stated. 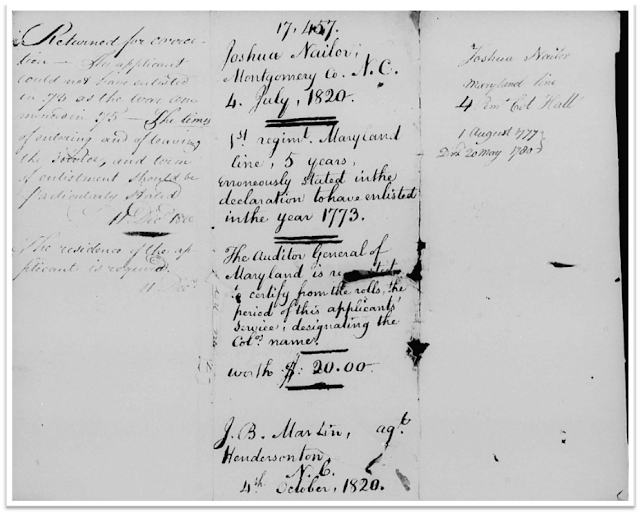 On this 11 Jan 1861 personally appeared before me, one of the acting Justices of the Peace, within and for the aforesaid county and state, J. T. Hall Esq, aged 79 years, (b. 1782) a resident of the county of Montgomery and state of North Carolina who being duly sworn states on his said oath that he was acquainted with Joshua Naylor, and his wife, Morning of Montgomery County state of North Carolina for at least 45 years previous to said Joshua Naylor’s death which took place in or about the year 1835. (So, J. T. Hall had known Joshua and Morning since 1790). The former who was a pensioner of the United States and the latter his wife, now his widow, who is applying for a pension. 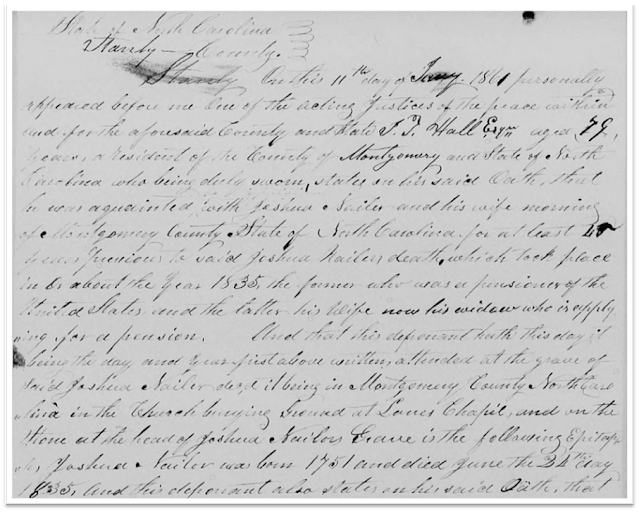 And that this deponent attended at the grave of said Joshua Naylor dec’d, it being in Montgomery County, North Carolina in the church burying ground at Lanes Chapel and on the stone at the head of Joshua Naylor’s grave is the following epitaph 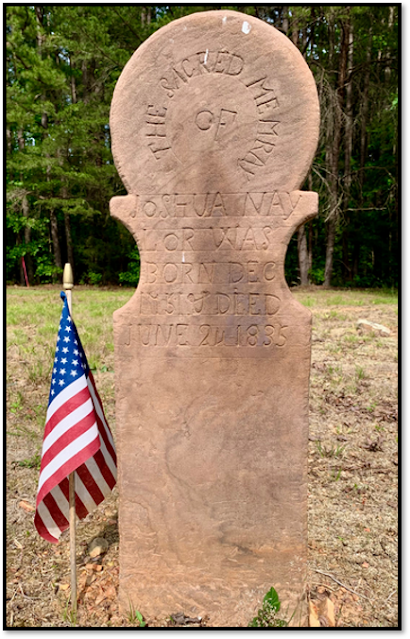 Morning Naylor had born of her the following named children, viz, George, Wade Hampton, Joshua, Jemima, and Adelpha full age at the time of their father, Joshua Naylor’s death. 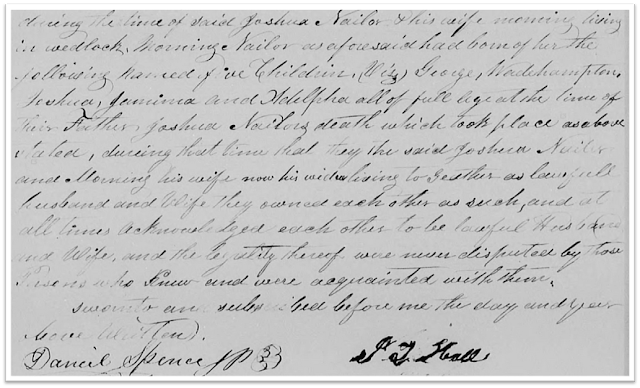 On 6 January 1861, John Hall, age 83 years (b. 1778), a resident of Stanly County, North Carolina states as follows, that he was well acquainted with Joshua Naylor and with his wife also, her name being before she intermarried with said Joshua Naylor, Morning Stoggins (actually Scoggin) and they were married in the county of Montgomery it being so long since deponent cannot recollect the day and date or the year when they we were married. 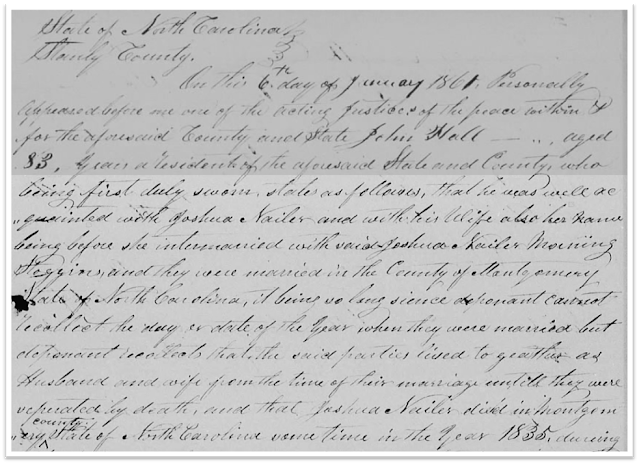 Joshua Nailor shown on the pension roll of 1835 for Montgomery County, North Carolina. Census records are a bit confusing for Joshua Naylor. Showing on the 1810 Census for Randolph County, North Carolina is Joshua Naylor “Nailor” with a lot more children than his 1818 pension allows for.

Even though Morning Naylor applied for a widow pension in 1861, she is not found on the 1850 or 1860 Census for Montgomery or Stanly Counties. 1830 Moore County Census shows a Josh. Naylor but with mostly male children listed and there is no female old enough to be Morning Naylor. 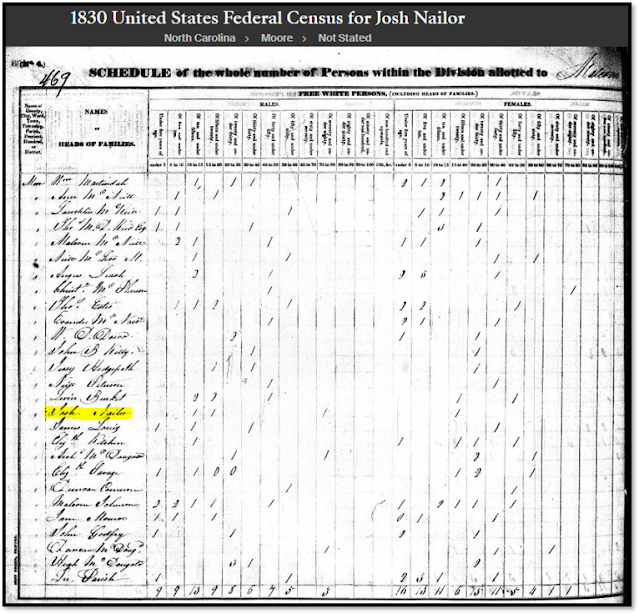 How is this Hezekiah related to Joshua Naylor? Is this the same Hezekiah who signed as bondsman for William Scoggin, father-in-law to Joshua? 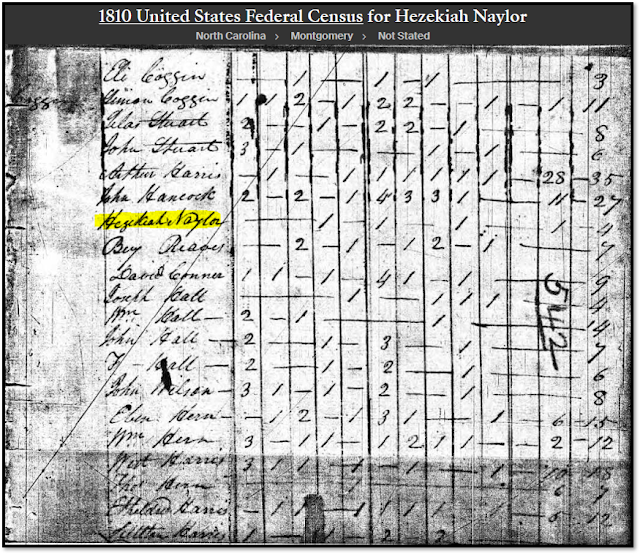 In 1819, The North Carolina Star reported an act to establish and lay off a town on the lands of Hezekiah Naylor and Micajah Lassiter of Randolph.

More information is found in the book, "The Laws of North-Carolina, Enacted in the Year 1818." The town was to be named Jacksonville on the road leading from Fayetteville to Salisbury. Obviously, the town never developed. 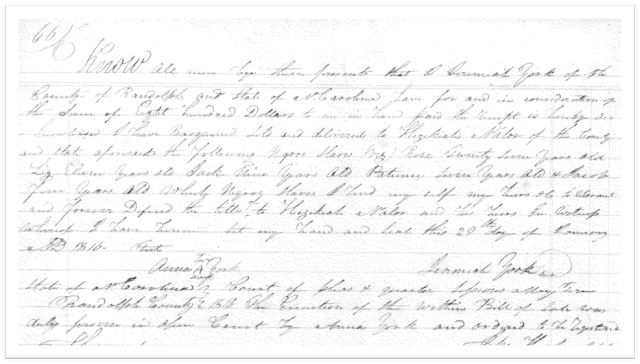 There is a court case that I need to find as it looks like there might be a judgement against Elizabeth and the money she is to inherit from the estate of William Lewis is to pay that judgment. That case file may contain genealogical information that is pertinent to this Naylor/Lewis family.

M. J. and J. B. Hackney are Miranda Naylor and her husband Joseph B. Hackney. 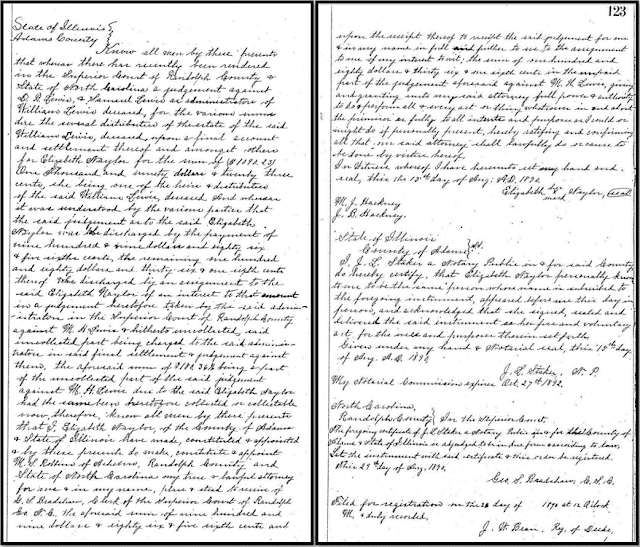 Miranda is the daughter of Calvin “C. J.” Naylor and wife Elizabeth Lewis who married in Randolph County, North Carolina in 1844.

Calvin and Elizabeth look to have migrated to Adams County, Illinois after 1850. Calvin is found on the 1850 Slave Schedule for Davidson County, North Carolina as owning one enslaved male. He is not found on the 1850 Census though. According to Find-a-Grave, Calvin died 10 Sep 1860, not long after arriving in Illinois. He is buried next to is wife Elizabeth Lewis Naylor, in Mount Horeb Cemetery, Adams County, Illinois. Daughter, Miranda, and her husband Joseph are also buried there.

Most family trees have Calvin listed as the son of Hezekiah Naylor, but unfortunately, I can find no proof documents showing the relationship.

As for Joshua and Morning Scoggin Naylor’s children, they seem to have migrated to Tennessee before 1850.

Jemima married William Barrett and moved to Saline District, Saline, Arkansas in 1850 but the couple are found in District 4, McNairy, Tennessee in 1860. She is not found with her husband and two younger children in 1870 who have moved to Horsehead, Johnson, Arkansas.

George looks to have married Martha, the sister of William Barrett, and moved to Hardeman County, Tennessee.

Morning Naylor died after 1861 as proven by her widow pension claim. It is quite the mystery why her gravestone is dated 1829. I would certainly be interested in knowing if this grave is truly the final resting place of Morning Naylor.

Posted by Uwharrie Roots at 5:55 PM