In an effort to learn more about my Marks ancestors, I have been researching their associates and neighbors who are found as witnesses and listed as neighbors on deed transactions. This type of research is called F.A.N – Family/Friends, Associates, and Neighbors. F.A.N. research allows you to learn all you can about the area where your ancestor lived, as well as those who lived around them, and it can bring a better understanding of the life your ancestor lived because whatever you find out was common knowledge to your ancestor – in other words, your ancestor lived in the history that you can only learn about.

On 7 May 1713, my ancestor, William Marks Jr., purchased from Henry Fleete of the Parish of Christ Church in the County of Lancaster, colony of Virginia, for forty pounds sterling a tract of land containing 145 acres that was part of an original tract patented by John Walker deceased on 16 Apr 1668 for one thousand and thirty acres. The 145 acres that William Marks Jr. bought was bounded on the North by a swamp, on the South by Edward Barrow’s land, and on the West by Henry Fleete’s land. The deed was witnessed by William Fauntleroy, Henry Fleete, and Gilbert Metcalfe and registered the same day it was written. 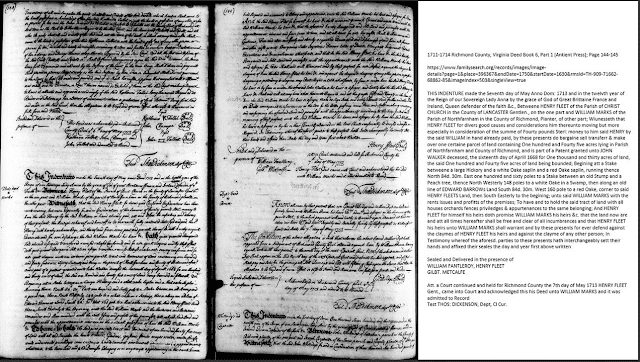 My Marks ancestors lived on the strip of land nestled between the Potomac and Rappahannock Rivers in Virginia, known as the Northern Neck, "the northernmost of three peninsulas on the western shore of the Chesapeake Bay in the Commonwealth of Virginia. The Potomac River forms the northern boundary of the peninsula; the Rappahannock River demarcates it on the south" (Wikipedia).

The area was called Naylor's Hole at the time my ancestor lived there, named possibly after John Naylor, a gentleman of Richmond and King George counties and was the name for the deep water in the Rappahannock River where ocean-going vessels could anchor. Naylor’s Wharf was on the north bank of the river near present day Naylor’s Beach and Cat Point. This area along the Rappahannock Creek was sometimes called Naylor’s Point and Menokin. 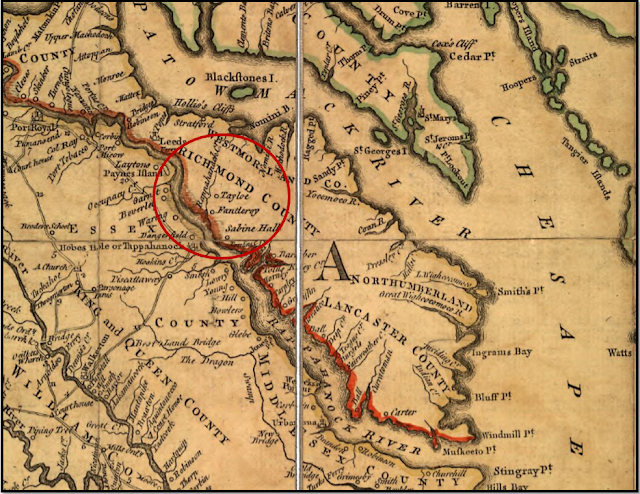 In the area of Naylor's Hole lived wealthy families named Tayloe, Carter, Fleete, Fauntleroy, and Metcalfe who were the movers and shakers of their day. These wealthy men served in the House of Burgesses, the legislative body of the Colony of Virginia and are found on land patents and deeds for thousands of acres of land. Plantation and slave owners, their money and influence were used in part to build tobacco roads that were used to roll hogsheads, or casks, of tobacco from plantations to the boat landings at Menokin Bay. There, the hogsheads, or casks, were put on barges and hauled down the Rappahannock Creek (now Cat Point Creek) to the port at Naylor’s Hole on the Rappahannock River and from there to the Chesapeake Bay, and on wards to the Atlantic Ocean, bound for England to be sold.

Early documentation of European settlement around Menokin occurred about 1650 when Moore Fauntleroy patented 1800 acres on the north side of the Rappahannock, on the west side of Bushwood Creek. This tract was called Mangorite. Moore Fauntleroy patented thousands more acres of land in Virginia and transported 179 people into the colony. His home, Mangorite, was also known as the "stone house field," now part of the Sabine Hall plantation that was built in 1730 by Landon Carter, son of Robert "King" Carter, probably the wealthiest man in Virginia at the time.

Moore "The Younger" married Mary, and several children were born of this union, but it is Moore's son, William Fauntleroy I, born about 1656, whom I am interested in because it is most likely his son, William Fauntleroy II, who, in 1713, had an encounter with my ancestor William Marks Jr. when he signed as witness to the deed between Henry Fleete and William Marks. Moore "The Younger" died in Old Rappahannock, Colony of Virginia in 1663.

On the west shore of Menokin Bay, Captain Henry Fleete patented his 750 acres of land in 1652. Fleete’s property was situated “southwest of the Great Rappahannock town where the Indians are at present seated 2 miles up Fleets Creek.” Captain Henry Fleete was born about 1602 in England and came to Jamestown, Virginia about 1621. Shortly after his arrival, he was captured by the Anacostia Indians, an Algonquian-speaking people that lived along the southeast side of the Anacostia River in what is now Washington, D. C., and held captive for five years. During that time, he learned their language and after his release in 1627 became a negotiator for both the colonies of Virginia and Maryland. He served in both Maryland's General Assembly and Virginia's House of Burgesses. Henry was a relation (some say nephew and others say second cousin) of Sir Francis Wyatt, the first English royal governor of Virginia. Upon his death, his widow, Sarah, married Lieutenant Colonel John Walker of Virginia and brought into that marriage a number of enslaved Africans, including a man named Edward Mozingo who was a neighbor of my Marks ancestors and has a fascinating life story that will make it into this blog someday.

Colonel Henry Fleete, born about 1647 in Virginia, is the son of Captain Henry and Sarah Fleete. He was a Justice of Lancaster County in 1695 and Sheriff in 1718 and 1719. He most likely is the Henry Fleete who sold his stepfather’s, John Walker, land to my ancestor, William Marks Jr, in 1713.

Avery Naylor, born about 1646 and possibly associated with John Naylor, whom Naylor's Hole was named, was also an early landowner in the vicinity of Naylor’s Creek on the south side of the Rappahannock River, opposite the mouth of Rappahannock Creek. Avery Naylor's last will and testament offers us three pieces of information that might help shed some light on how William Marks Jr was connected to the Metcalfe family through the Newman family.

1. His wife is named as Patience Naylor.

2. He names his godson, Avery Dye, the son of Arthur Dye.

3. He forgives the debt that Thomas Newman owes him.

This is probably Thomas Newman II, the brother-in-law of Avery Naylor. 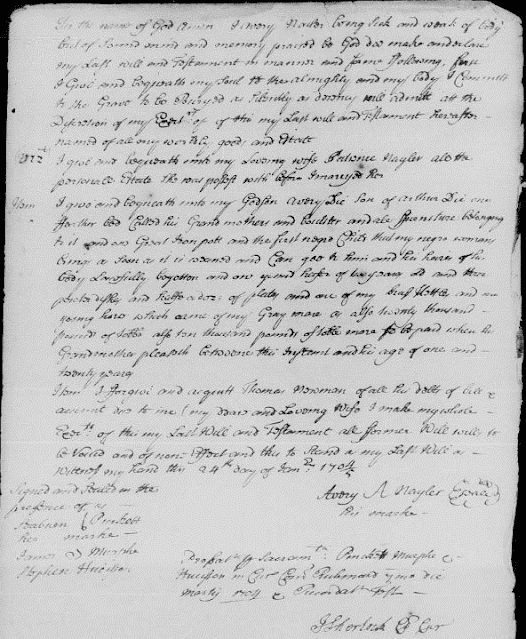 Back to Richard Metcalfe, he married second, Ann Stone, daughter of John Stone and Sarah Burden. Edward Barrow was the husband of Ann Stone who was first married to Richard Metcalfe after his wife Elizabeth Fauntleroy died. When his will was probated, the court ordered Edward Barrow’s estate be appraised by John Morton, James Wilson, Edward Eidson, and Henry Bruce or any three of them.

Posted by Uwharrie Roots at 5:23 PM