I have been waiting for a time to use this map/survey (shown below) since I got my hands on it. I must give credit to the creator of North Carolina Map Blog for sending it to me and a big thanks for giving me permission to use it on my blog. The map is an “1830s (or later) manuscript map that shows tracts of land on either side of Island Creek, south of Uwharrie River and Dutchman's Creek. The various plats are mostly dated 1773 and 1783, but a few in the 1800s, including the latest of 1830.”

We do not know who drew the map or for what purpose, although I think it was most likely ordered drawn due to a land dispute. The only land dispute case that I am aware of for this area is Bonaparte v. Carter February Term, 1890, an action to recover land, tried at Fall Term, 1889, of Montgomery Superior Court, before Merrimon, J., but the map, although it has some strikingly similarities with the dispute, just does not seem to fit with the dates of this particular case. There is nothing on the back of the map to indicate who drew it or the date of drawing. There are some clues offered for the date of the drawing, although it is a wide range.

Fork, listed in the upper left corner of the map, was the area of current day Eldorado. This area was known as Fork up until about 1870. Names on the map also provide some clues to the dating. Henry Delamothe died in 1838 and is buried in the area of the old town of Henderson. His plats on the map are dated 1824 and 1829. On the lower portion of the map is a 600-acre tract of land belonging to E. Deberry dated 1830, the latest date listed on the map. Another area of the map is the corner of E. B. (Elisha Bennett) Smart’s land. He migrated to Campbell County, Georgia in the mid-1830s. A & E Kron listed on the map are the nieces of Henry Delamothe and daughters of Dr. Francis Kron. These ladies never lived on the east side of the Yadkin / Pee Dee River but did own land there that they inherited from their great uncle, Henry Delamothe, when he died in 1838. Adelaide and Elizabeth would have only been 12 and 9 years old in 1840. Shown below is only the top portion of the map depicting the area at the mouth of the Uwharrie River between Island Creek and Dutchman Creek. This area today is called Old Town. It is where the old county seat of Henderson was situated from about 1792 until about 1819. Dennis Road runs straight through the area today. I have included, in red boxes, some translations so it is easier to read. 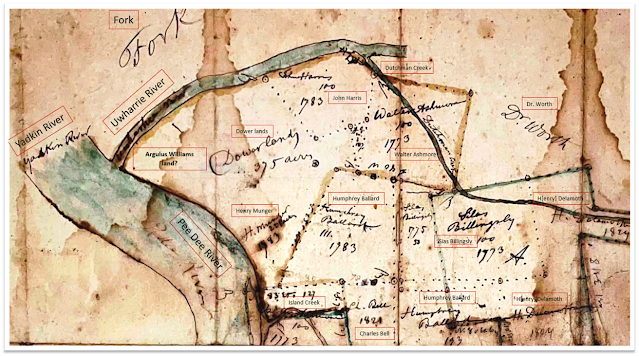 I am particularly interested in the earlier plates shown on the map because a man named Archelus (Argulus) Williams had a land grant dated Sep 1779 for 28-acres of land near the mouth of the Uwharrie River between John Harris and Humphrey Ballard, both are shown on the above map. I have added Archelus Williams name in a red box depicting the general area where his land was located.

The survey for Archelus’s land was completed in 1795 showing the meets and bounds as the Northeast side of the Pee Dee River near the mouth of Uwharrie River … runs to Humphrey Ballard's corner in (Henry) McCulloch’s line … runs with Ballard's line to a stake in John Harris's line. 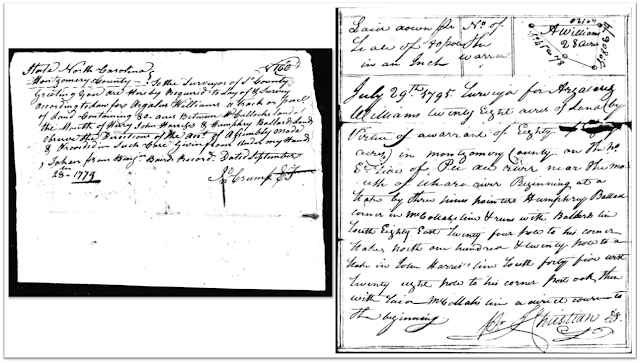 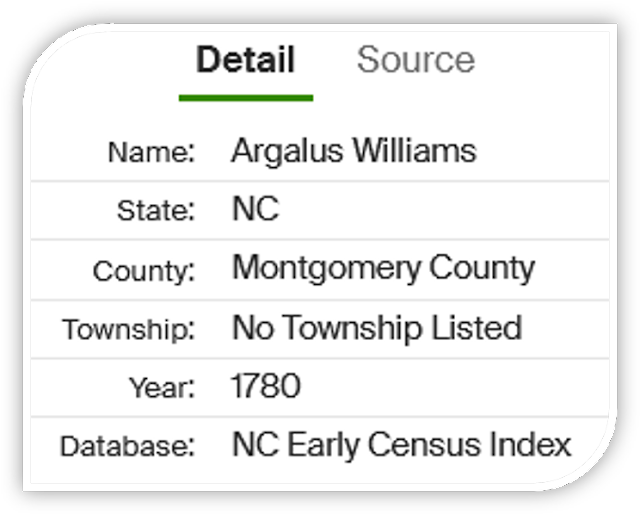 As noted in that post, Samuel Williams Senior, in 1832, appeared in open court in the town of Lebanon, county of Wilson, state of Tennessee, where he had migrated to in 1807 from Montgomery County, North Carolina. He was aged about 74 years and made his declaration to obtain a pension for his service in the Revolutionary War. He stated that he volunteered as a private soldier for the term of three months in 1776 in the county of Anson. In 1777 and in 1778 he volunteered for a three-month tour in Warren County, North Carolina and again in 1778, back in Montgomery County, he volunteered and served under Captain Buckner Kimball. Samuel also was a witness in the widow pension of Nancy Williams, widow of Thomas C. Williams Esq., stating that he was at their wedding in Warren County, North Carolina. So, Samuel, and probably Thomas, were moving back and forth between Warren and Montgomery Counties.

But Samuel and Thomas are not brothers to Archelus, although I think these men are somehow related to one another.

Robert Williams, who is believed to be a native of England, migrated to America around 1735, settling probably in what is now Mecklenburg County, Virginia and later migrating to Warren County, formerly Bute, and before that Granville County. He had at least eight children by three different wives. Named in his will that was probated in Warren County, North Carolina in 1772 are John, Francis, Nimrod, Simon, Dorcas, Ashkenaz, Archelaus, and Permenas.

In 1772, Archelus witnessed a deed in Bute County between Nimrod Williams, his brother and Robert Williams Sr, his father, for a tract of land on Weavers Creek. 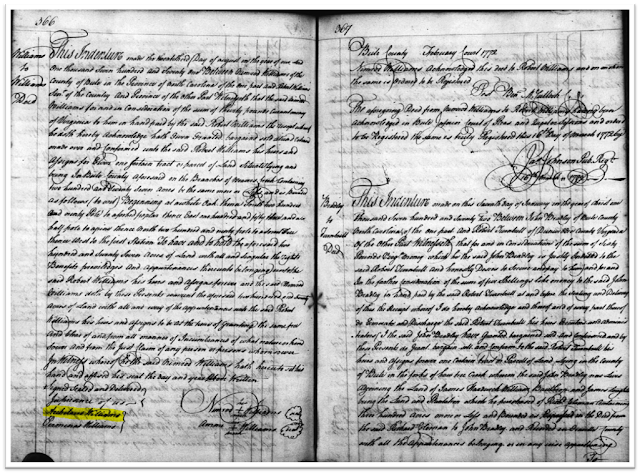 Robert Williams Sr was first married to Elizabeth Lowe, second to Ann Bennett, and third to Ann Edwards. He wrote his will in 1772, Bute County, North Carolina, naming his wife, Ann (Edwards) Williams, and children.

What is interesting to note here is that John Edwards was listed as one of the Executor’s to Robert Williams’ last will and testament. No doubt, John is related to Ann Edwards, the third wife of Robert Williams Sr, probably a brother, cousin, or uncle.

Going back to the map and looking at the bottom half, John Edwards is listed as owning land in Montgomery County on both sides of Island Creek in 1783, not far from Archelus Williams. Could this be the same John Edwards listed in the will of Robert Williams?

Ambrose Edwards, thought to be the brother of John, also owned land in Montgomery County on the Pee Dee River.

A 1792 deed from Montgomery County, that survived the numerous courthouse fires, shows Nathaniel Edwards, son of John Edwards, conveying part of this tract of land to Charles Ledbetter.

This Indenture made this 30th day January 1792 between Nathl Edwards of the county of Montgomery and state of North Carolina of the one part and Charles Ledbetter of the county and state aforesaid of the other part ... Nathl Edwards for and in consideration of the sum of 100 pounds current money ... conveyed to Charles Ledbetter a tract of land on the waters of Island Creek, it being granted to John Edwards Dec'd by a state grant bearing date 11 Oct 1783 and conveyed from John Edwards to his son Nathaniel Edwards and from Nathaniel Edwards to the said Charles Ledbetter… witnesses: James Cotton and Cary Pritchard. 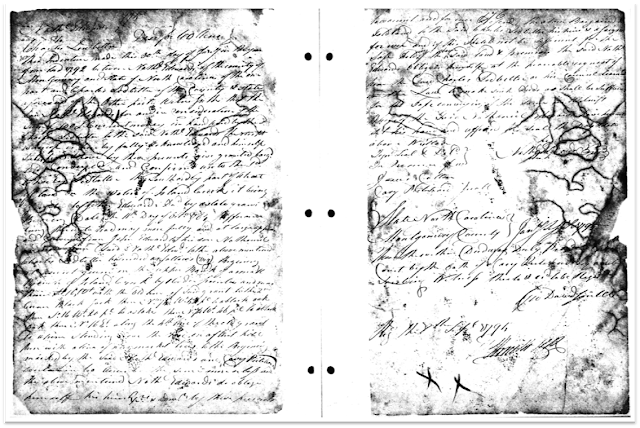 John Edwards grant and survey shows that the survey for this tract of land completed in Jul 1779. He entered the grant in Anson County in Dec 1779 and the grant was issued in Oct 1783.

Joseph Williams, son of Ashkenaz and Sarah Hackney Williams, and nephew of Archelaus Williams, married Mahala Howard in Warren County, North Carolina in 1792. Joseph and Mahala migrated to Wilson County, Tennessee both dying there about 1825.

Posted by Uwharrie Roots at 6:08 PM