On the 1800 Census, Angus is listed between the ages of 16 and 25, making him born between 1775 and 1784. He lives as a bachelor, with 5 slaves, between Nathan Cothan (maybe Corthan?) and Henry DeBerry, Revolutionary War soldier, and only 4 doors down from Nathaniel Edwards. 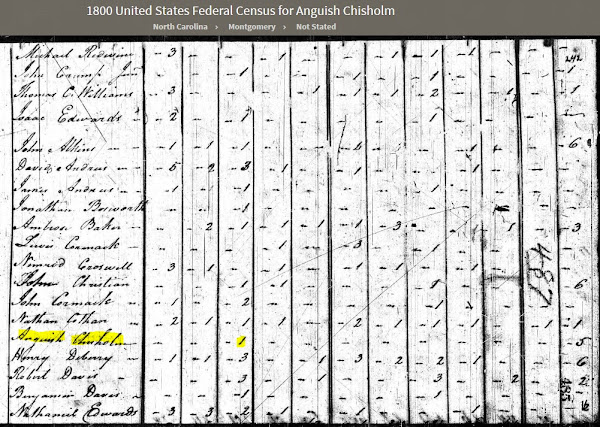 Nathaniel Edwards of Montgomery County, North Carolina was born about 1762 in Georgia, according to the census records of his son Crawford, and the birth location of his brothers and sisters. He is in the 1787 tax records and in the 1790 and 1800 censuses in Montgomery County. His children began appearing in the records in Wilson County, Tennessee in 1804, but there are no records in Tennessee for Nathaniel himself. His last child was born in North Carolina in 1806. The absence of Nathaniel from the tax records in Wilson County implies that he was never a resident of Wilson County. Nancy, his wife, appeared as head of household in the 1820 census.

Nathaniel's wife, Nancy Howard Edwards, was identified in the will of her father, William Howard, who died in 1814. Nathaniel married Nancy Howard about 1780. There were nine surviving children in the 1800 census, and there were three children born after 1800. The names of the children were not in any historical document with Nathaniel or Nancy and had to be researched individually. Eleven of the children have been identified and are now verified by DNA. (by Jerry Edwards).

On the next page of the Census, and near-by, lives Bradford Howard who is the brother of Nancy. You can read more about these families and how I worked together with Jerry to discover how my Morgan line was identified with Alston Morgan, son of Anderson Morgan, who migrated with the Edwards family to Wilson County, Tennessee. It is my belief that Nathaniel Edwards has a connection to the Edwards family in Chatham County, North Carolina. 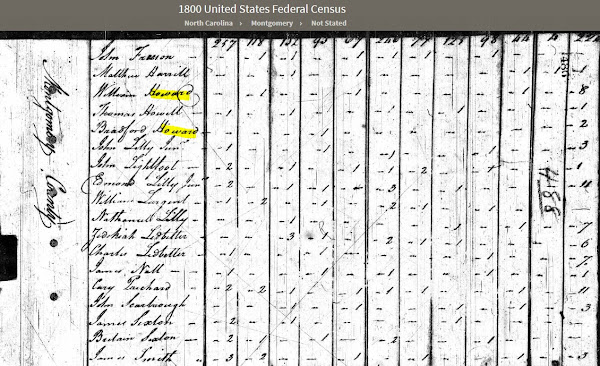 Now, back to Angus… On the 1810 Census, Angus is found married with a listing for son under the age of 10 years and a daughter, also under the age of ten years. His wife is listed between 26 and 44 years of age. 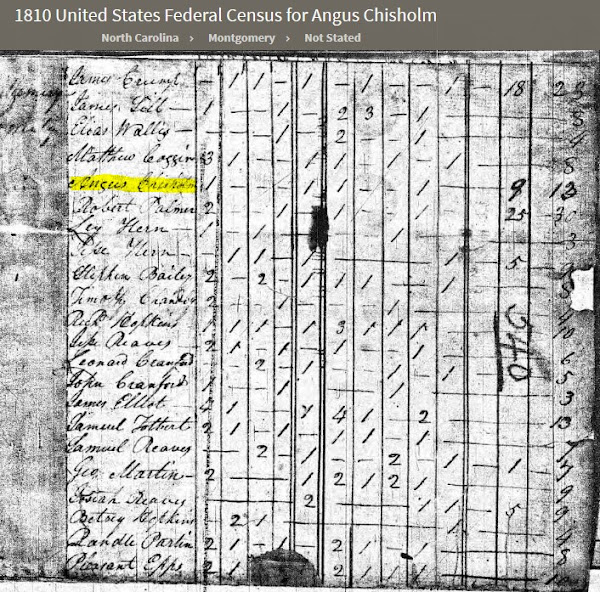 Angus is believed by many to have married first Sally Myrick Harris, daughter of Arthur Harris and his first wife, Mary Myrick. What is interesting to note here is that Arthur Harris married second, Elizabeth Edwards, who no doubt is related to Nathaniel Edwards, and, if I had to guess, my theory would be that she is probably his sister as they are close in age. Elizabeth was married first to Brantley Harris, the brother of Arthur, as proven by the widow pension file of Elizabeth found at Fold3.

In the Carolina Watchman - 13 Mar 1879 - Page 2, is found evidence that Sally was originally buried in the Chisholm family cemetery, along with West Harris, whose remains were moved to Rowan County, North Carolina when the Chisholm graveyard was flooded to form Badin lake in the early 1900s. Angus and Sally had at least one child, a son, Whitson H. Chisholm. I am sure more children were born of this union, but I have not been able to identify them with any certainty.

Most family trees on Ancestry show Sally married to Daniel Chisholm; I believe this in incorrect, mainly because Daniel married a woman named Miriam as mentioned in his will. I will write more about that family in another post. Sally died in 1819 at the age of 35, making her birth year 1784. The graveyard where Sally was originally buried is now under Badin Lake. Her grave was one of hundreds that was relocated to Graveyard Island between 1915 - 1917 when Alcoa dammed the Yadkin River. 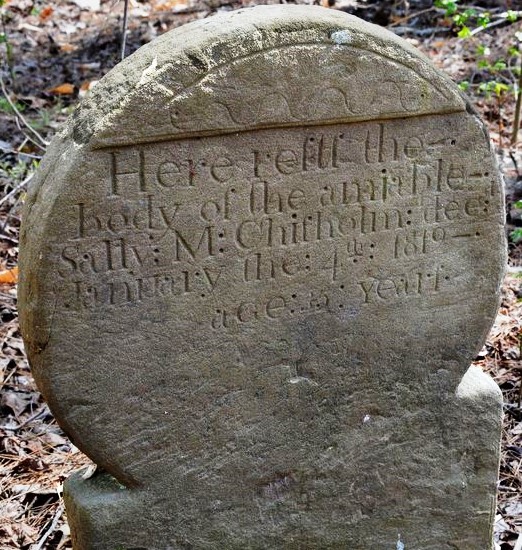 Graveyard Island is a recent name given to Big Cut Cemetery, the higher ground that became an island when Badin Lake was created when Narrows Dam was completed across the Narrows of the Yadkin River and filled in 1917. A number of graves were moved to the old Kirk family graveyard near Palmerville, North Carolina in 1916 and early 1917, including those of the Locke Family in May 1916, the Adderton’s in October 1916, the Harris-Chisholm Family in November 1916, the Pennington’s, Morton’s, and others. In a few cases, new stones were placed in 1916. Many stones have become unreadable with time or been damaged by falling trees and a 2015 forest fire. There are at least three cemeteries located on Graveyard Island. The island can only be accessed walking 3 miles down train tracks or by boat. (Find-A-Grave)

A Chisholm descendant was kind enough to share with me the below letter received in 1916 from then Tallassee Power Company, now The Tapoco Project. The letter refers to the relatives of D.[aniel] M. Chisholm, Sally Chisholm, and Martha Chisholm, who are buried in the graveyard in Eldorado Township, near Machine Branch. Martha (Stanback) Chisholm is the wife of Whitson Chisholm, who is the son of Angus and Sally Harris Chisholm. Her death was recorded in The Raleigh Register on 8 Aug 1828. It is noted that she and Whitson had only been married for five months at the time of her death. Recorded in the Carolina Watchman in 1879, by someone who called themselves NEMO, is the traditional history of how Martha died. The story that had been handed down from 1828 to 1879 in the county of Montgomery is that Martha was poisoned by a yellow servant girl who belonged to Whitson Chisholm at or before her marriage. 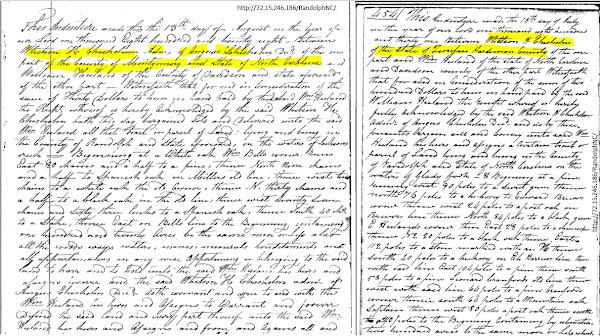 Whitson can be found, listed as Wilson, on the 1830 Census for Hardeman County, Tennessee. A few pages over, lives James Pankey, the son of Auzey and Elizabeth Chisholm Pankey. James is a cousin to Whitson through Angus’s brother Daniel Chisholm whose daughter, Elizabeth, married Auzey Pankey. 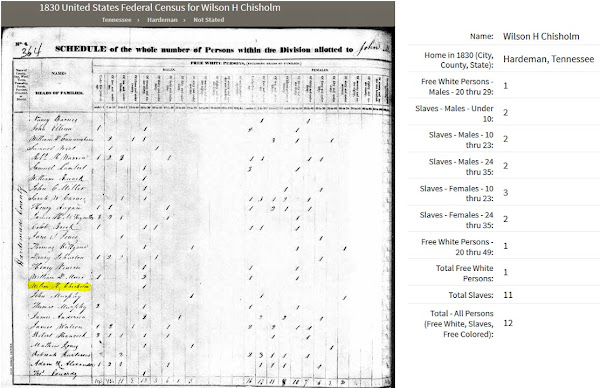 James Pankey is mentioned in an article in The North-Carolinian (Fayetteville, North Carolina) 29 Mar 1845. The unknown writer had made a trip to Hardeman County, Tennessee in 1844 where he visited many of the people who had left Montgomery County, North Carolina and reported on their welfare in the Fayetteville paper on his return. In a surviving letter, dated 1848, James Pankey writes to his Uncle-in-law, John Ewing, married Mary Chisholm, sister of Elizabeth Chisholm Pankey, with news of the family’s welfare. A transcribed copy is found below. 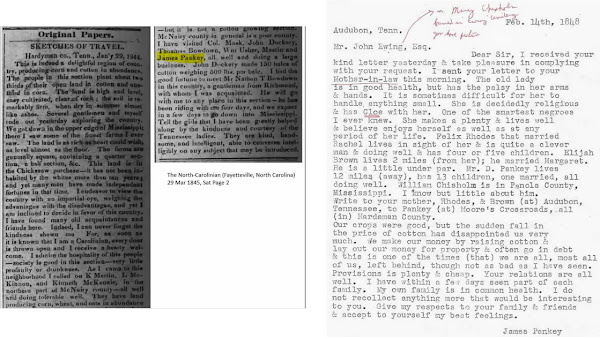 Many researchers mistake that Angus, son of Murdock, served in the War of 1812. While Angus (Anguish) Chisholm is found on the Muster Rolls for First Reg. Montgomery County, North Carolina for the year 1814, there is no evidence that Angus ever actually served in the War of 1812. An in-depth search on Fold3 found only one file for an Angus Chisholm of Fayetteville, North Carolina. In the file is a letter from close friends John Culpepper Esq and William King Esq, who wrote a letter on behalf of “Angus Chisholm, the son of Finlay Chisholm of this town (Merchant) who died in April 1813.” 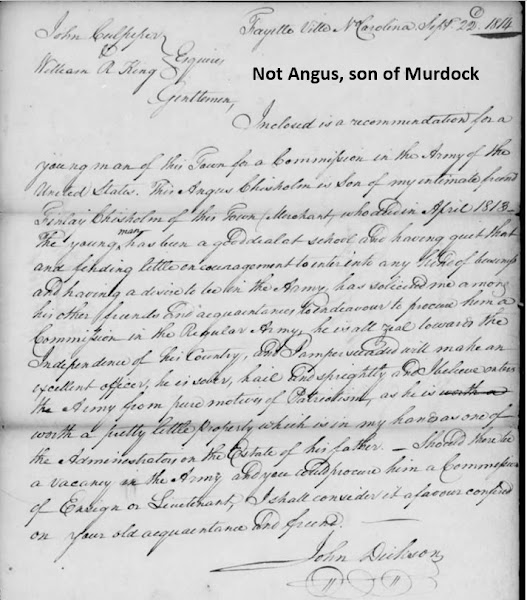 As a note, there was also an Angus Chisholm in Moore County, North Carolina who can be found on the 1820 Census for that county and is listed as between the ages of 26-44, putting his year of birth as 1785 and too young to be Angus, son of Murdock. There is also a listing for this Angus Chisholm on the roles for 3 REG'T (MOORE'S) NORTH CAROLINA MIL and probably the same Angus who is found on the 1820 Census for Moore County.

After Sally died, Angus married Jane Harris, daughter of Maj. Thomas Harris, a Revolutionary War soldier, from Mecklenburg and Iredell counties North Carolina. Jane is mentioned in the will of Thomas Harris as Jane Chisholm and her marriage to Angus Chisholm of Montgomery County was announced in the Fayetteville Weekly Observer in 1824, where she is noted as the daughter of Maj. Harris. Jane had two sisters, Rachel, married James Neely, and Matlilda, married William Moore.

In 1801, a survey was ordered for Angus for 300 acres on the west side of the Pee Dee River on the waters of Mountain Creek, including Michael Higgin’s improvements. Chain carriers were Isaac and Caleb Carter.

Michael Higgin’s had acquired this land in March 1796 with the survey completing in July 1796; Joshua Carter Sen and Samuel Carter, my fifth great grandfather, were chain carriers.

In 1818, Angus was issued a land grant for 150 acres of land in Montgomery County on Beaverdam Creek, beginning on the fourth corner of his Palmer tract of land. The land adjoined West Harris and Arthur Harris and Eloy (?) Harris served as chainers. The Palmer tract of land may have been acquired from William Palmer who had several early land grants in Anson County, prior to the area becoming Montgomery County, but only one grant on Beaverdam Creek. That grant was issued in Jan 1773 for 640 acres of land on Beaverdam Creek.

The land may have also belonged to Robert Palmer, who is found as the neighbor of Angus on the 1810 Census. 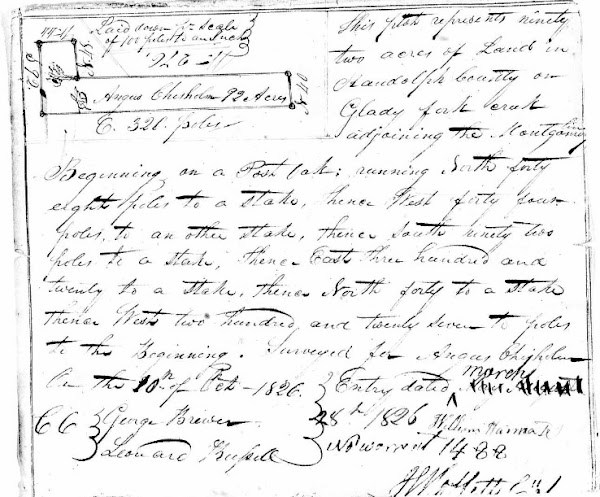 In 1820, Jonathan Saratt of Randolph County indebted himself to Angus Chisholm for $35. “This being the sum of a judgement which is at this time in the hands of Solomon Farmer to collect for Angus Chisholm, which money Jonathan Saratt shall pay to the said Chisholm on or before the first day of Jan 1822.” Witness W. H. Chisholm. Undoubtedly, the majority of Sarratt’s ended up in Davidson County, North Carolina. See estate files at Family Search for more information on this family

In Sep. 1813, Angus purchased from Joseph Tolbert (sometimes seen as Talbert) a tract of land containing 100 acres on the waters of Big Creek in Randolph County for $100. Big Creek lies close to land that Angus already owns, close to present day Center Methodist Church Road in Montgomery County. William Hannah and Isaac Hanna were witness to the deed. 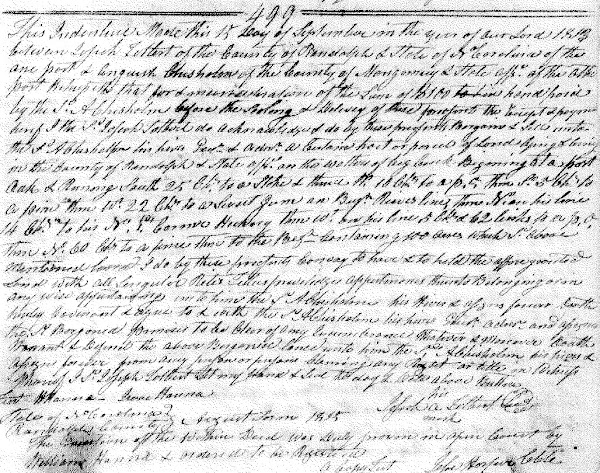 On the same day in Sep 1813, Angus purchased from Thomas Tolbert of the county of Randolph, for $15, a tract or parcel of land lying and being in the county of Rowan on the waters of Glady Fork and near the Montgomery County line, 150 acres. 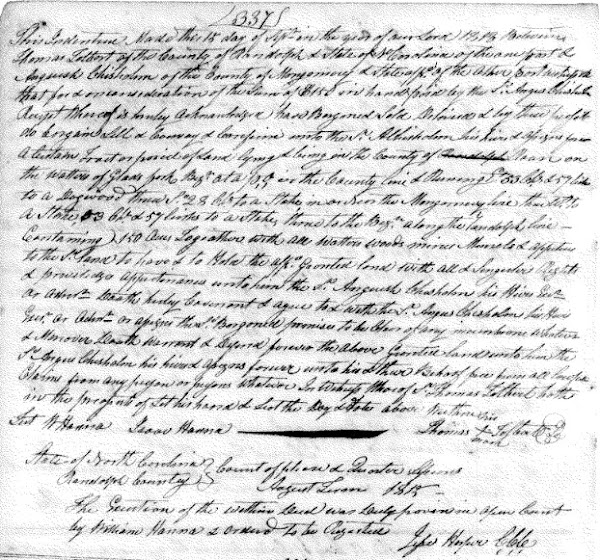 In 1820, Angus purchases “all that tract of land situate lying and being in the county of Randolph on the waters of Big Creek containing 100 acres” from Josiah Tolbert. Witnesses: M. Hill and Nathan Cranford. 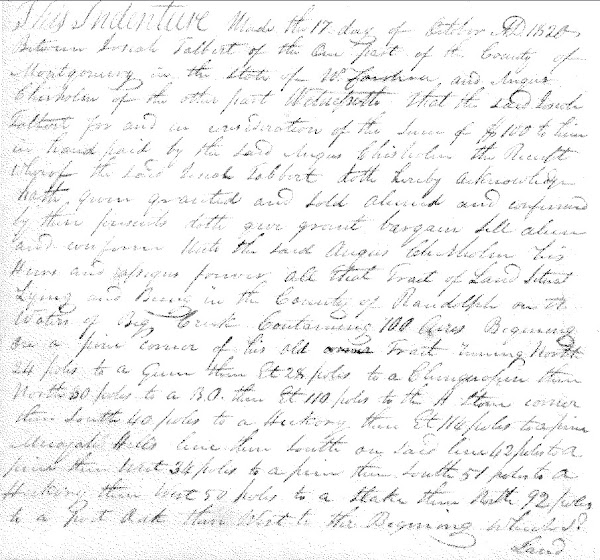 In 1811, Angus is the highest bidder for a tract of land, 186 acres, where John Smith Esq, High Sheriff of Rowan, has been ordered by the court to sell for debt against Wiley Davis, Rowan. 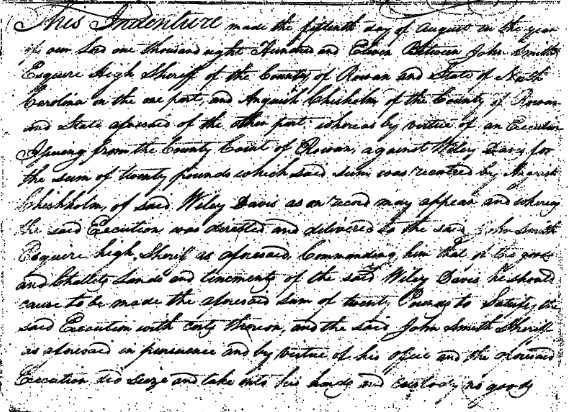 In Sep 1821, Angus buys from John Davis of Rowan County 109 acres of land, all that tract of land situate in the county of Rowan and north east of the Yadkin River on Cedar Branch, beginning at Robert Shipton's line and runs to James Daniels corner. 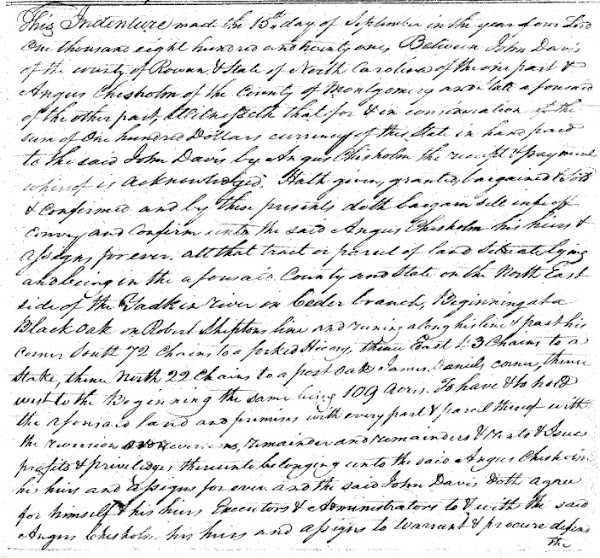 In 1823, Angus binds himself to William Huland (or Hulin) for $400 lawful money...the condition being such that if Angus Chisholm do well and truly make a lawful right and title to William Huland to a certain tract of land containing 200 acres being in Randolph County on the waters of Glady Fork where on Josiah Tolbert formerly lived and sold to Chisholm then the above bond is to be void.” Witness: Farquar Martin. 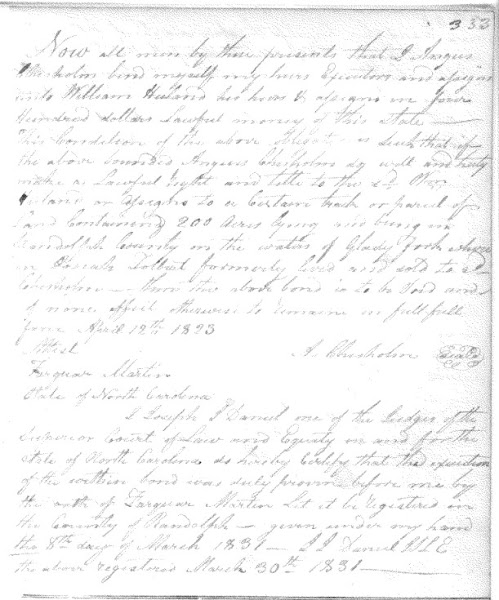 Gold was discovered on property belonging to Angus and in the mid-1820s several Newspaper articles were written about the excitement of gold being found on or near the Chisholm property. Such tales as “the roads were paved with gold” were told. In 1826, an accident at Chisholm's Gold Mine dreadfully mangled a Mr. King by the premature discharge of powder which he was placing in a rock for the purpose of blasting. Mr. King most likely died from the explosion. 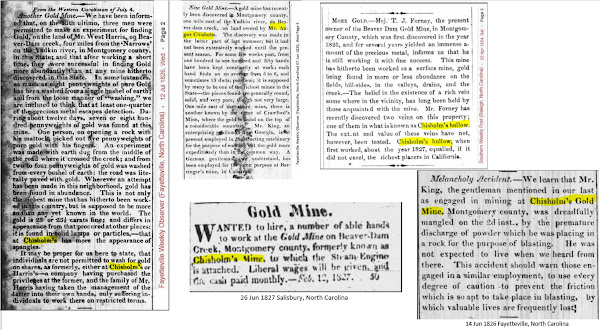 Angus Chisholm died before 15 Nov 1827. I have concluded this date based on a Cumberland County deed dated 1818 between Angus and David Hay of Fayetteville, Cumberland County. Angus purchased from David Hay a lot of land in the public square in the Town of Fayetteville, to be used to build, within three years, a brick building at least two stories high...witness John MacDonald and J. Chisholm That same piece of property was advertised for sale on 15 Nov 1827 by W. H. Chisholm, Adm’r of Angus Chisholm. Angus never building as the lot is listed as unimproved. 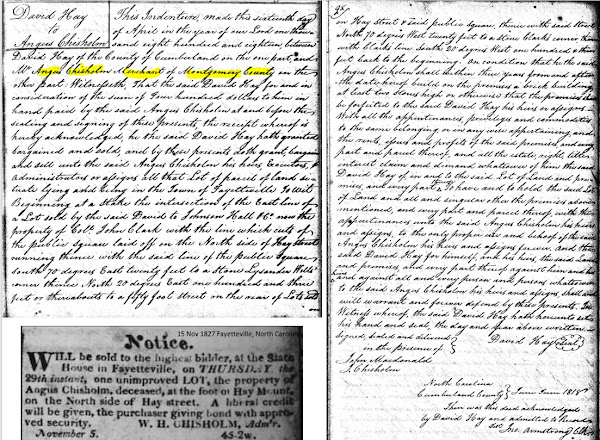 Posted by Uwharrie Roots at 1:00 PM