As stated so many times on this Blog, Montgomery County, North Carolina is a difficult county to research because it's what's called a burned county, meaning that many county records were destroyed by fire. Montgomery is not the only county like this. Other counties across the nation have lost records due to any number of reasons; fire, tornado, war, flood, hurricane, earthquake, insects, rodents, mold, neglect, foxing, theft, tsunami, or cleaning-streak clerks who shredded documents.

Due to the loss of records, I must be very careful when researching a family in early Montgomery County. Families of that time used repeated names for multiple generations and sometimes it is frustrating figuring out which person belongs to which direct line.

Estate files can be a great resource for confirming family connections, dates of death and names of descendants because they typically spell out who the next of kin are to the person who has died. Such was the case when I was reading through estate files at Family Search and came across an early file for Murdock Chisholm.

Murdock Chisholm's estate file lists his heirs at law as shown below. The file is great because it spells out, through the distribution, who the people are and indicates which of his children are already dead prior to March 1825, the date of the distribution, and names some of his grandchildren.

The heirs at law are mentioned in the below documents. I have transcribed enough of the documents to assist in understanding the family relationships and have noted below what I have found thus far on each family member. More to come on each of these family members in more Blog posts, so stayed tuned.

1. Malcolm Chisholm is dead and his wife, Mary, and sons John and Daniel Junr, received his share.

Note: I did find some online resources that show Malcolm dying in 1844, and while there is a Malcolm with an estate file for 1844 that was Administered by John Ewing and a Malcolm on every Census in Montgomery County between 1790 - 1840, it cannot be Malcolm, the son of Murdock, as he is dead by 1825. I believe the Malcolm Chisholm who died in 1844 came to America with a letter from Roderick Chisholm in Scotland. More on this Malcolm in another Blog post.

3. Daniel Chisholm Senr is dead before the 1825 distribution and the file only mentions "heirs at law" but never names any of the heirs of Daniel.

4. John Chisholm is dead prior to 1825 and his share of the proceeds went to Calvin J Chisholm and Mary A Chisholm - listed as the children of Jno Chisholm.

5. James McMillan & wife Rachel Chisholm migrated to Chesterfield District, South Carolina where they are found applying for a Revolutionary War pension. Their children are also listed as applying for their parents’ pension after Rachel, their mother, died in 1844.

6. John Morrison and wife Mary Chisholm. I am still researching this couple and have not found out what happened to them.

Murdock’s estate file can be found at the below link.

Montgomery County Docket 1804–1824 found at Family Search, on pages 126 through 129, is a record of Murdock Chisholm’s deceased and his family. 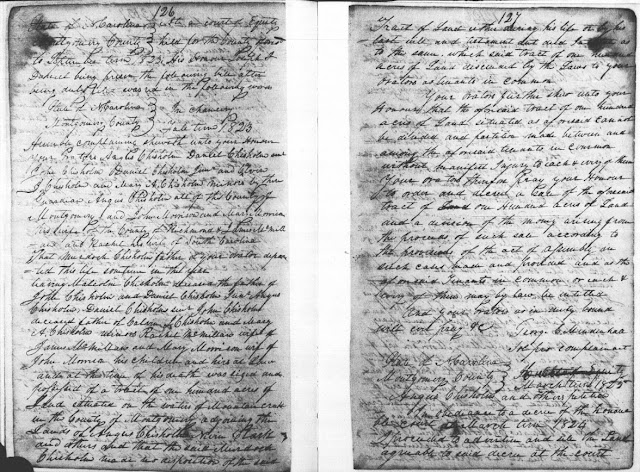 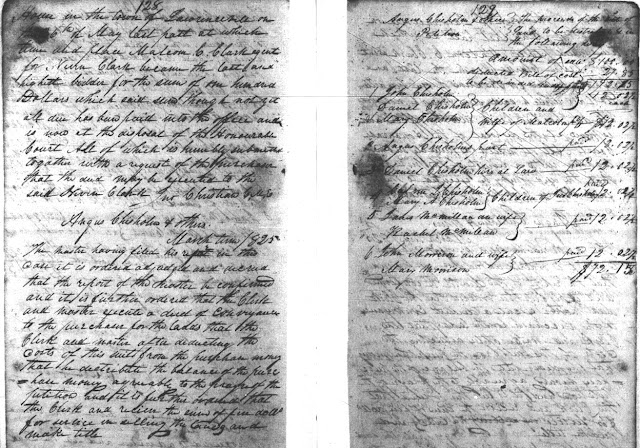 Posted by Uwharrie Roots at 2:25 PM