This is the last Blog on the Kirk family. As noted, when I began researching the Kirk family back in May of this year, I am not, as far as I know, a direct descendant of the Kirk family. However, I have learned through years of research that, sometimes, in order to find information on your own direct family lines you must research those families who lived near-by.

I was actually looking for information that would place my Marks family in the Montgomery/Stanly County area prior to 1830. I found exactly what I was looking for by researching the Kirk's, who were near neighbors to my Marks family. The earliest documented date I had of John Marks, my fourth great grandfather, being in Montgomery County was around 1833 when he was found making purchases in Daniel Freeman’s General Store in Lawrenceville, then the county seat of Montgomery. The 1833 date is now pushed back seven years to 1826 thanks to the Kirk family. I found my fourth great grandfather, John Marks, serving as chain carrier for a grant for an 1826 land survey for George Kirk. It always pays to research the neighbors of your ancestors!

The last two persons listed in the division of land in the John Kirk Dec’d estate file is John Kirk and James Kirk.

Division the 10th Lot No 9 called the Tindalville Tract valuation $500 to John Kirk. Beginning at a maple by willow oak the beginning of Lot No 10 and runs with the line of said lot north 75 west five poles to a small sweet gum thence south 53 poles to a stake in the road below where George Kirk lives between an ash and sweet gum pointers thence along said road south 39 west 73 poles to a stake between two pines thence North 75 west 129 pole thence north 26 east 244 poles to a stake thence east to the River thence down the various courses of said River to the beginning containing one hundred and ninety two acres.

Division the 11th and Lot No 11 valuation $1000 to James Kirk called the Berry tract lying on the east side of the Pee Dee River beginning at a hickory standing at the mouth of Island Creek and runs north 25 east 220 poles to a post oak thence west 28 poles to the road thence with the various courses of sd road to the Town Line of Henderson thence with the town line So 20 East 6 poles to a stake thence south 70 west 68 poles to the River containing one hundred and thirteen and ¾ acres by an addition of 2-3/4 acres being added which by his on the east branch of the river sold to John Kirk Dec’d by the commissioners appointed for that and other purposes containing in the whole on thousand nine hundred and seventy five ½ acres by estimation that the valuation of the whole amount is seven thousand and twenty three dollars.

I have spent weeks researching John Kirk and James Kirk and have been able to find some assumptions made from other researchers; I have not been able to verify some of the assumptions. I  checked the Y-DNA Kirk surname project and was not able to find any conclusive data on John Kirk Senior, the father of John Kirk and James Kirk. If any male descendants have Y-DNA tested, they do not look to have been grouped in the project yet. Or, if they have been grouped, it is not clear which group they belong to. So, I will cover what little I have found.

1830 finds John Kirk Jr. living in Montgomery County, North Carolina in close vicinity to his nephew and brother, Davidson Kirk, and Stephen Kirk. All three men are listed as being close in age, about 30 years, and all three men have young children in the home. However, there is no wife listed for John Kirk, so it could be assumed his wife has died by 1830. 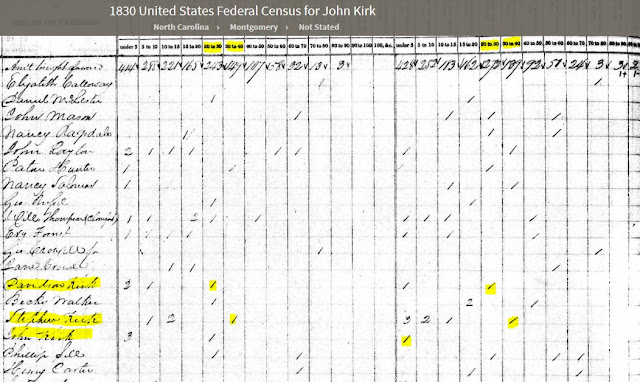 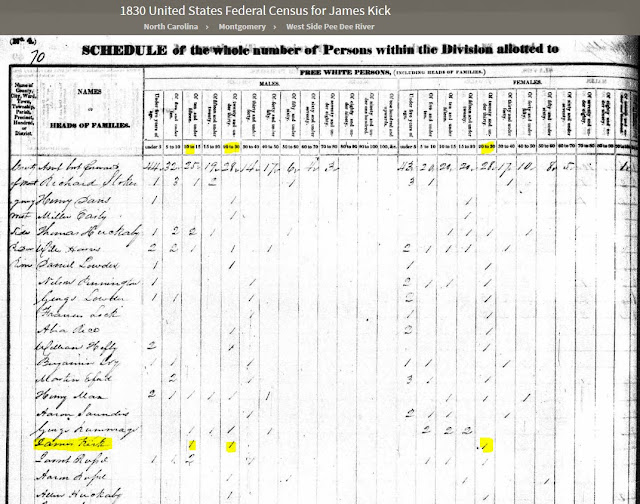 I viewed more than 50 trees on Ancestry, and all had John Kirk listed as marrying Sarah “Sallie” Wood in Randolph County, North Carolina. While it is possible, it would not be the norm for 1823 that a man would cross a River to marry a woman when there were plenty of women living in the same area where he resided. Following the records on this John Kirk and Sarah Wood led me to McNairy County, Tennessee, where they are found on the 1850 Census. Living in the same household is Elizabeth Kirk, age 100, and presumably, John’s mother. Yet, in all the trees I viewed, the researcher has Mary Sarah Steele, who died in North Carolina in 1828, listed as John’s mother with no explanation as to who the 100-year-old Elizabeth could be. I do not believe that the couple in Randolph County, North Carolina are the same couple who lived on the other side of the Yadkin River in the area that would become Stanly County.

Further searches found a John Kirk on the 1850 Census for Rowan County, closer to Stanly County, and more realistic, but still not Stanly County, where John is found through Census and Land records through at least 1847. However, what makes the Rowan County Census more believable is that next door lives James Kirk whose age is close enough to be a brother of John.

Still not convinced that this 1850 Census in Rowan County is the same John and James Kirk from Stanly County, I had to dig deeper to find more clues. 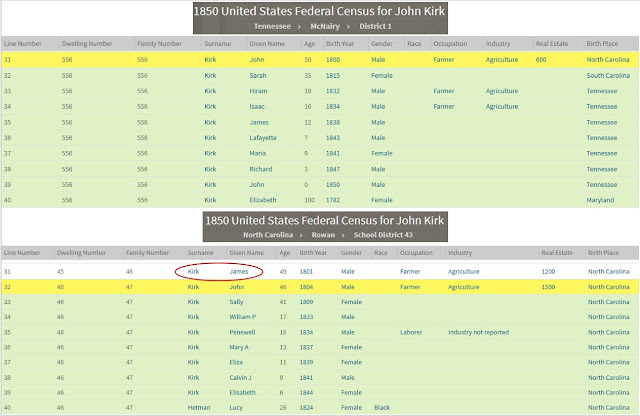 Land records show that John Kirk Jr. was issued a land grant, number 497, in 1845, for 50 acres on Cedar Branch in Stanly County, North Carolina. Edmund Lilly and Parham Kirk were chain carriers and Daniel Freeman and Michael Fesperman were noted as near neighbors. 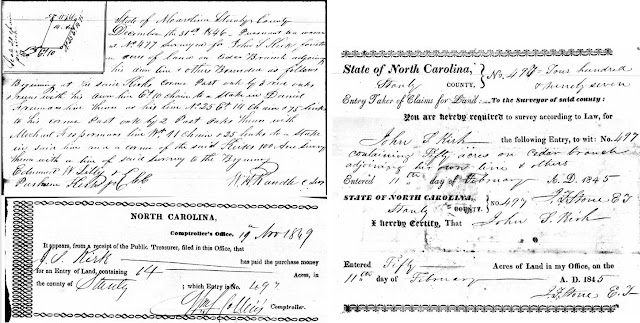 Again, in 1847, 100 acres of land on the head of Cedar Branch was issued to John Kirk. Neighbors were David Kendal, whose land is noted as formally belonging to John Parker Senior, Lewis Kirk and a 50-acre tract granted to Laban Carter, now owned by John Kirk. 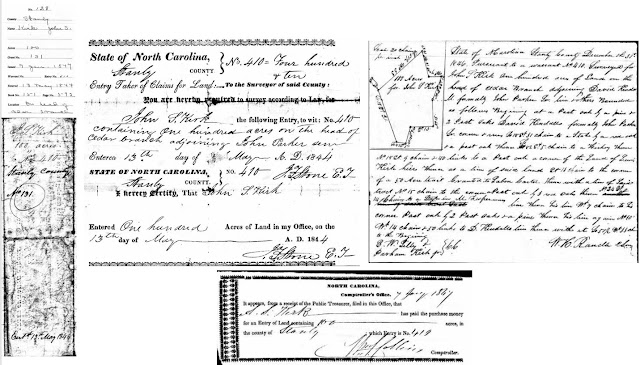 Searching land deeds found an 1844 deed from Laban Carter to John Kirk for 50-acres of land in Stanly County on the Cedar Branch of Mountain Creek and sold for $40 and adjoining the land of the heirs of Lewis Kirk, and Robert Carter who had purchased his land from Samuel Stone. The last two men served as witnesses to the deed. 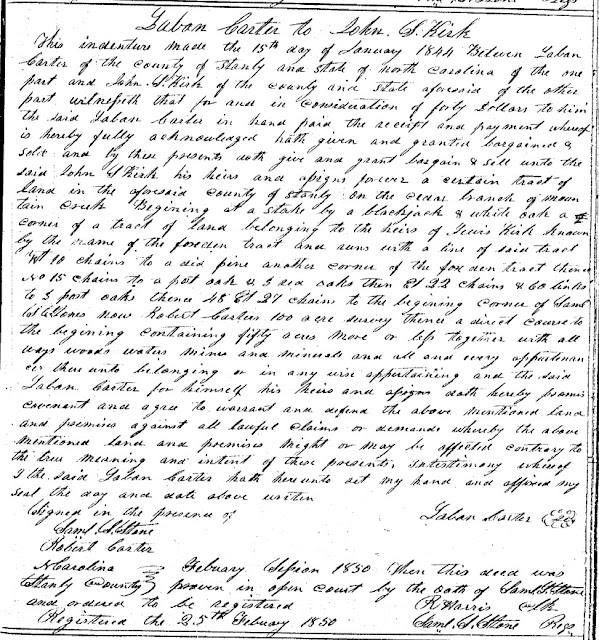 Searching Rowan County, North Carolina estate records brought me success with the will of James Kirk who died in 1864. The will has also cleared up some confusion on Edith Kirk Miller, the daughter of Stephen Kirk. In my previous Blog I made mention of a discrepancy with daughter, Edith. The 1850 Census lists Edith Kirk as 20 years old, making her born about 1830, living in household of Stephen Kirk, her father.

Stephen Kirk’s will was written in 17 May 1852 and mentions Edith Miller as his youngest daughter, with no children. So, Edith Kirk was married to a man with surname Miller between 1850 when the Census was enumerated and 1852 when Stephen Kirk wrote his will.

Every tree that I reviewed on Ancestry lists Edith as born in 1812 and the wife of John Franklin Miller. While there is a John F and Edith (age 38) Miller listed on the 1850 Census, I just could not reconcile how this could be Edith, daughter of Stephen Kirk, as Edith Kirk would have been 4 years old when Jane Miller, who is shown on the 1850 Census as the eldest child of John Miller, was born. I began to wonder if Edith Kirk lied about her age as she married a man much older than herself who already had 6 children. But, alas, the will of James Kirk has cleared up the confusion.

James Kirk's will begins as most do, "In the name of God...I James Kirk being of disposing mind and memory and calling to mind the uncertainty of life...I dispose of my estate real and personal by last will and testament."

First, I give to niece Elizabeth Lentz wife of Eli Lentz one Negro Slave by the name of Juliann
Secondly, to niece Rebecca Fouts widow of Eli Fouts one Negro Slave Caroline
Thirdly, to niece Edith Miller wife of Ellick Miller one negro slave Adaline
Fourthly, to nephew Jesse A. Kirk one negro slave Adam
Fifthly, to nephew Ezra Kirk two negro slaves Mark and Amy
Sixthly, to nephew Edward Moss three negro slaves Harriet George and Jacob
Seventhly, to nephew Atlas Kirk three negro slaves Allen, Judah, and Sarah
Eighthly, to Ann James Kirk daughter of Atlas Kirk one negro child Levi
Ninthly, to niece Eliza Giles Shaver daughter of George Kirk one negro slave Dick
Tenthly, to nephew Edward Moss and Ezra Kirk the land where I now reside composed of various adjoining and continuous tracts supposed to contain 534 acres
Eleventhly, to nephews Edward Moss Atlas Kirk and Ezra Kirk a tract of land lying on Dutch Second Creek known as the Huffman tract supposed to contain 240 acres
Twelfthly, all the property I possess which are not in this will disposed of I authorize empower my Executor to expose to sale either private or public and pay all of my just debts and the balance distributed between Edward Moss, Atlas Kirk, Ezra Kirk, Jane Parker wife of Jesse Parker, Elizabeth Lentz wife of Eli Lentz, Rebecca Fouts widow of Eli Fouts, Edith Miller wife of Ellick Miller and Jesse A Kirk equally.
Lastly, I appoint Atlas Kirk Executor
23 May 1864 James Kirk
Witness: Levi Trexlar and Sarah Ann Ferrell
Proved as to the will not the Codicil

Codicil to the above will on 23 May 1864
7 Sep 1864
the negro man Dick which I have Bequeathed to Elizar Shaver the wife of Noah Shaver have taken away from her to which I have given Jesse Kirk and Edith Miller the wife of A. Miller I bequeath the said negro man Dick each to have equal shear or value of said boy to belong to them and their ears forever James Kirk. Witness: Sarah Ann Ferrell 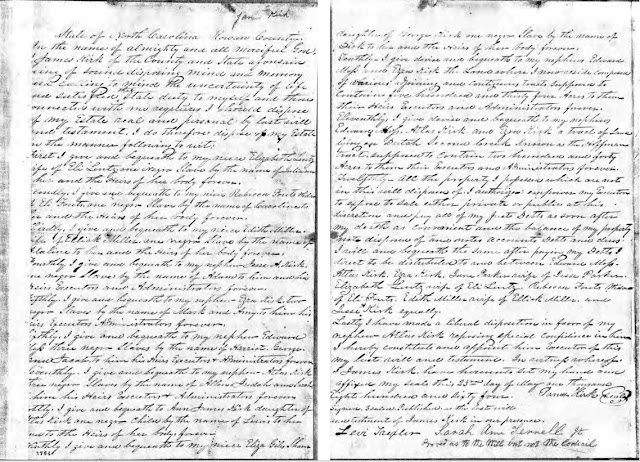 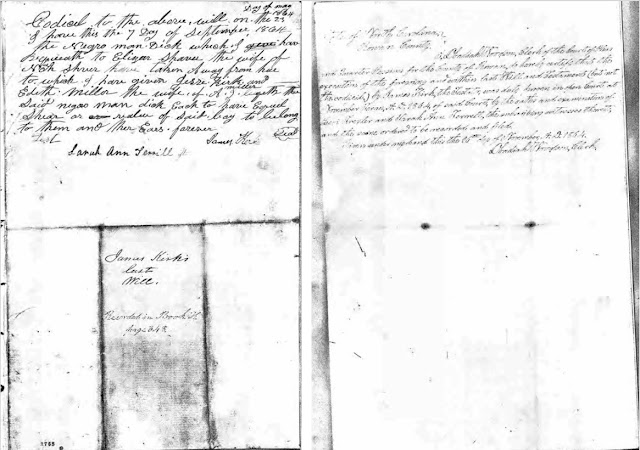 Posted by Uwharrie Roots at 1:43 PM