The ninth person listed in the division of land in the John Kirk Dec’d estate file is Alexander Kirk.

Born about 1797, Alexander Kirk started his life in the home of John Kirk, his father, in then Montgomery County, North Carolina. He lived on the west side of the Yadkin River, above the Narrows. His father John Kirk, in 1780 had established a public ferry linking the area to a major roadway, the Salisbury-Fayetteville Market Road. Ferry systems linked roads, and counties, together, providing travel across rivers so families could get to markets to sell their merchandise. 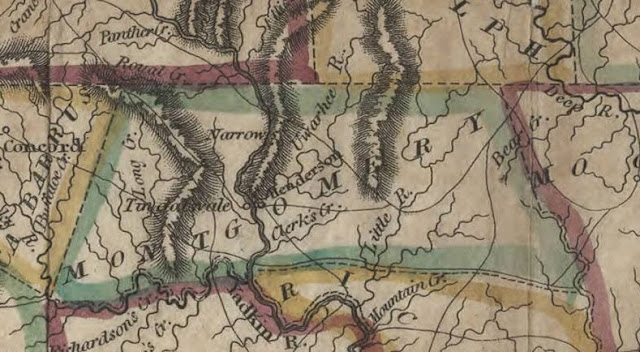 Around 1820, Alexander married Louisa Forrest, the daughter of John Forrest and Mary Bailey. Alexander seemed content to work his 142 acres and run the ferry back and forth across the Yadkin River for some time. His next land purchase was not until 1825 when he entered 50 acres of land on Lick Creek joining his brother, Stephen Kirk’s, land. The survey for this land was done in 1827. 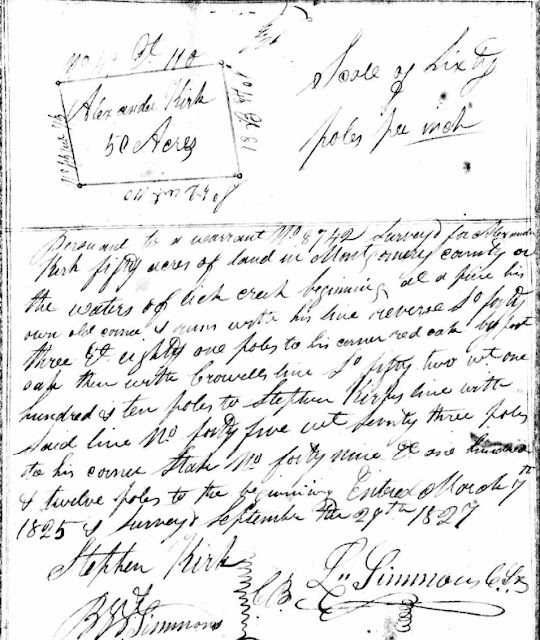 By 1830, Alexander is listed as living on the west side of the Pee Dee River in Montgomery (now Stanly) County, North Carolina. He has four sons and three daughters. The 1840 Census is of not much consequence to the Alexander Kirk family. Living in the same place, Alexander has listed five sons and six daughters. 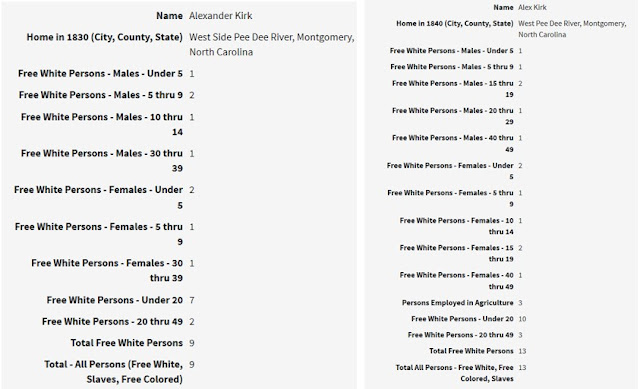 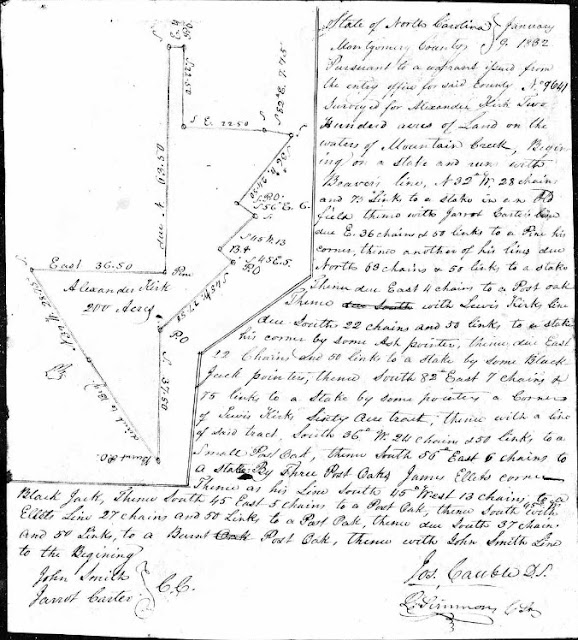 I recently made an appointment to visit Wake Forest University to view Ebenezer (now Badin) Baptist Church records collection. The documents in this collection contain minutes of church conferences, 1836-1973. I have obtained the records for 1836-1900.

Alexander Kirk was a founding member of Ebenezer Church, as was my fourth great grandfather, Michael Fesperman. The records show that there was some conflict between these two men, but never spells out what exactly the issues were.

In March 1837, Alexander Kirk brought before the church ten or eleven allegations against Brother Fesperman which was read and rejected.

Again, in November, allegations were offered by Alexander Kirk against Mark Jones which were investigated by the church and again the same allegations from March were offered against Michael Fesperman but again rejected. 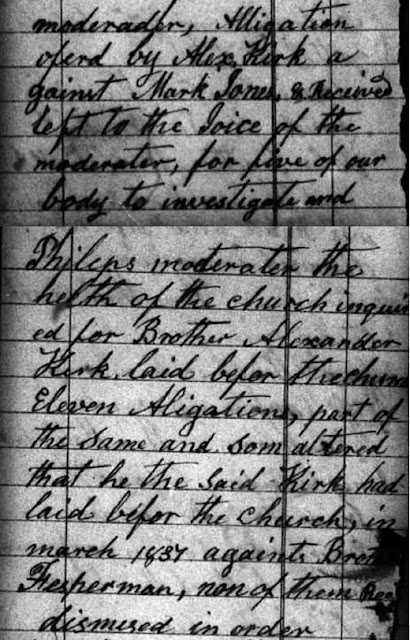 By 1839, whatever the issue was between Alexander Kirk and Mark Jones looks to have been cleared up and the two men, in brotherly love, shook hands and moved on with their lives. 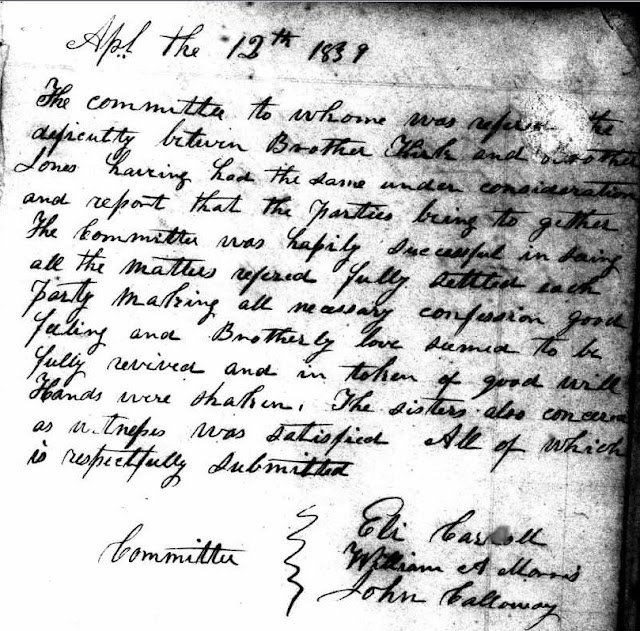 Unfortunately, the same cannot be said for Alexander Kirk and Michael Fesperman. In November 1839 (three years after the first allegations were reported), the committee from the church who was investigating the matter found, to their astonishment, that a number of the points of contention between Kirk and Fesperman were of a trivial nature and the church should never have been troubled with. It is amazing that it took them three years to figure this out!

The committee found that Kirk and Fesperman had not acted in a Christianly way towards one another and have disturbed the peace of the church with their bad behavior. The dispute had gotten so bad that the church finally expelled them both, comparing it to an “amputation of a limb of the church body” but hoping that in time they can be restored to the church in the spirit of meekness. 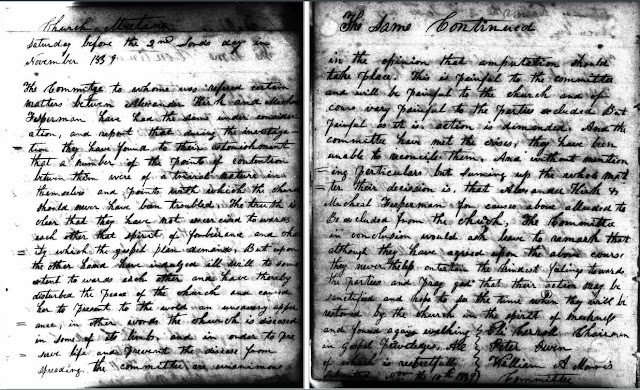 By November 1840, the record does show that Alexander Kirk was restored to the church after making the necessary acknowledgments that the gospel demands. 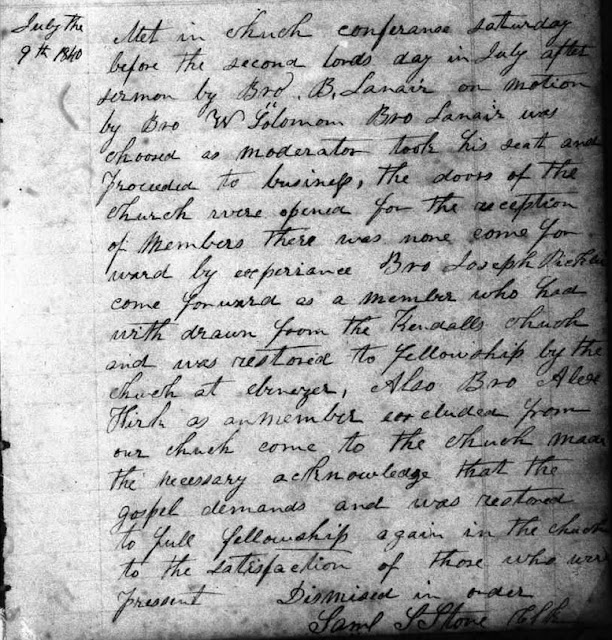 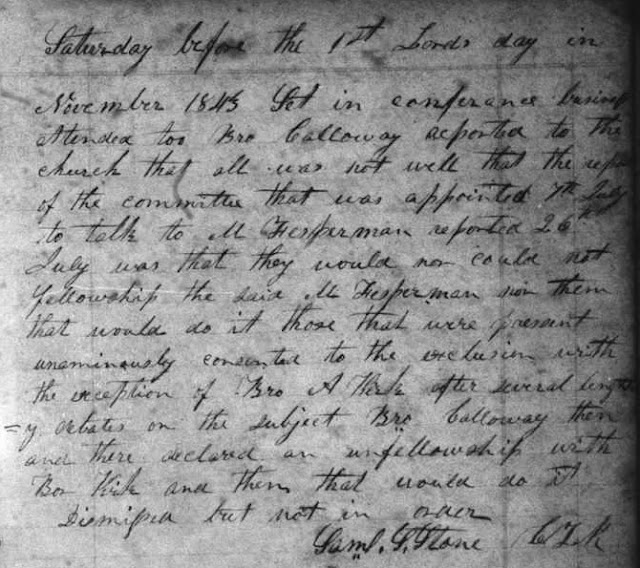 By 1844, both Alexander and wife, Louisa, have been expelled from the church for their part in a matter that the church felt best not to describe the “particulars” of but, only said, it involved Sally Kirk and her brother, Sam.

Alexander Kirk died in 1858. His estate Administered by his brother, Parham Kirk, between 1859 and 1860 and showing that many from the community bought items at the estate sale. Alexander is buried at Ebenezer (now Badin) Baptist Church in Stanly County, North Carolina.

Posted by Uwharrie Roots at 2:57 PM