The seventh person mentioned in the division of land in the John Kirk Dec’d estate file is Stephen Kirk. 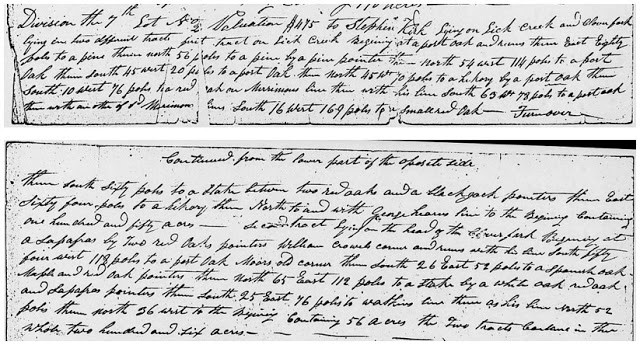 Stephen Kirk was born about 1795 in Montgomery County, North Carolina. I can pin him to the 1800 and 1810 Census living with his father, John Kirk, as a child. The 1820 Census was destroyed, thus the next possible record to find Stephen on is the above survey dated 1818, showing the survey of the land he inherited when his father, John, died.

In September 1818, Stephen, now 23 years of age, enters two land grants for 15 and 30 acres of land joining his father’s, John Kirk dec’d, and the Rowan County and Montgomery County line. Both tracts of land were surveyed by Britain Chappell and chain carriers were brothers, James, Parham, Daniel, and Lewis. 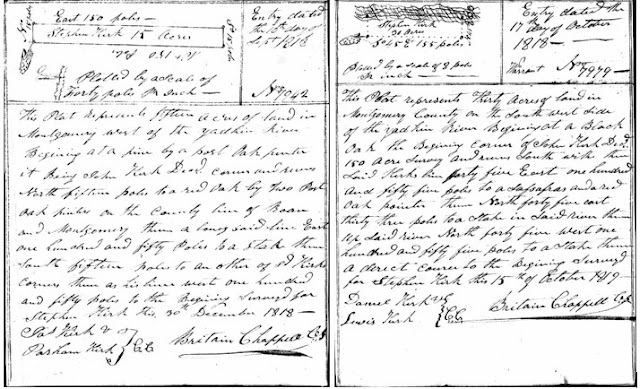 A great substitute for the 1820 Census is Newspapers if you can find your ancestor listed. I can establish that Stephen Kirk was in Montgomery County, North Carolina because John Patterson ran an ad for a $20 reward for a runaway slave by the name of Simon, who was a Blacksmith by trade. John Patterson notes in his ad that Simon is thought ‘to be in the neighborhood of Allenton’ or on the property of Stephen Kirk in Montgomery. 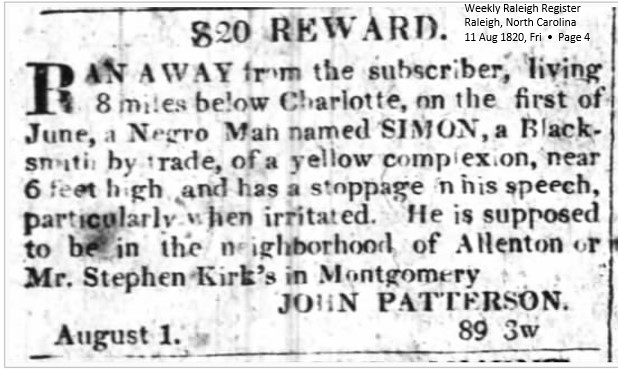 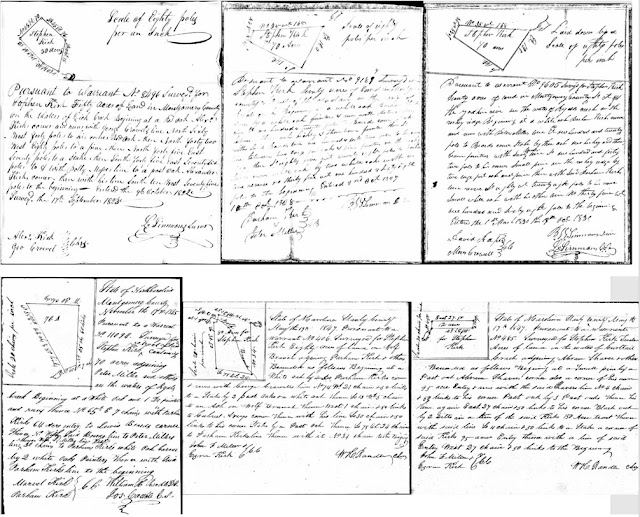 Stephen Kirk looks to have settled down to raise a family about 1816, when son, Lewis, was born. I found a wide range of dates when researching the children of Stephen Kirk. From Stephen’s will, I know Lewis was his eldest son and Jane (Parker) was his eldest daughter, as he calls them such in his will. Based on the 1830 Census, the best I can calculate the ages of the children are as noted below.

Most research I read in preparation of this Blog post suggests that Stephen married Edith Kimball, daughter of Buckner Kimball. However, I have found zero evidence as to who Stephen Kirk’s first wife is. If anyone knows, please leave a comment with the information and where I can find the documented proof. 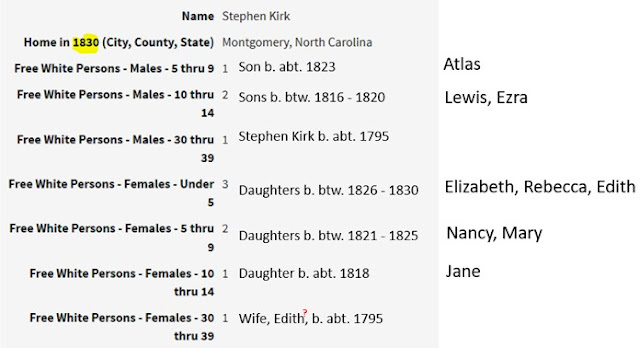 By 1840, some of the older children look to have moved from the household but Stephen and wife have had some additions since the last Census. (Note: Kimball is also seen as Kimbrell and Kimble) 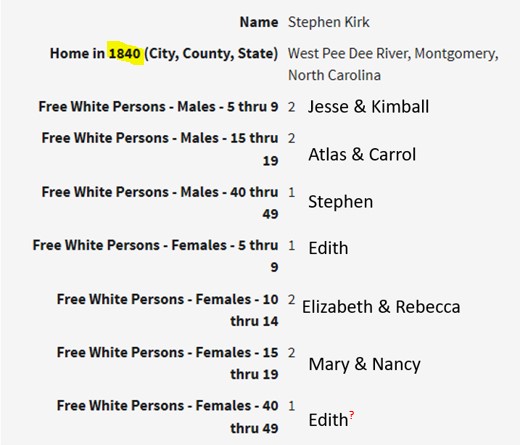 Unlike Census data between 1790 and 1840, the 1850 Census lists, by name, all those is the household. It also shows who is missing. From this Census we can tell that Edith, the wife of Stephen, must have died between 1841, when Kimble was born and 21 Aug 1850, when the Census was enumerated. Children remaining at home with Stephen, their father, are Edith, Ezra, Carrol, Jesse and Kimbrell. 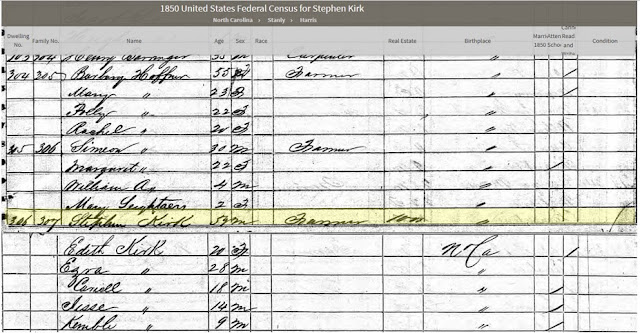 On 2 Oct 1851, a little over a year after the 1850 Census was enumerated, the Carolina Watchman, a paper out of Salisbury, North Carolina, announced the marriage of Stephen Kirk to Syntha Goodman, whom Stephen lists as Cynthia is his will, and the step-mother of his two youngest sons Jesse and Kimbrell. 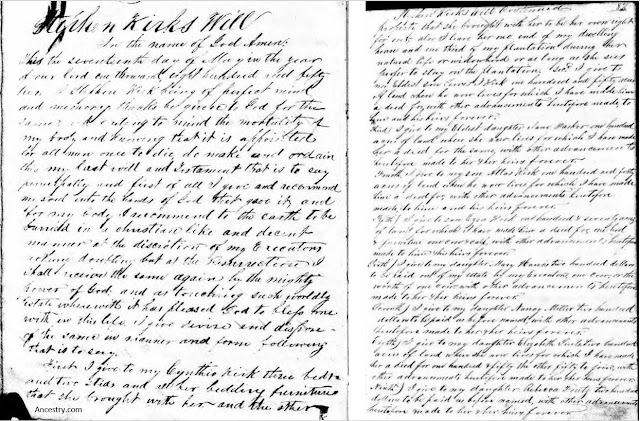 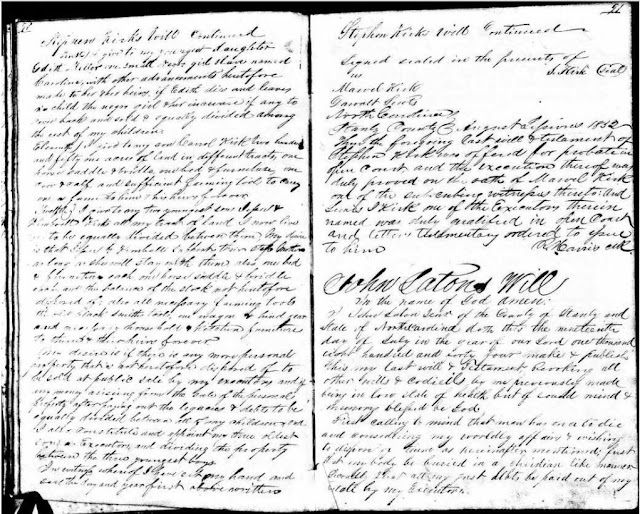 Lastly, I want to mention that while researching Stephen Kirk and his family, I noticed what looks to be a discrepancy with daughter, Edith. The 1850 Census lists Edith Kirk as 20 years old, making her born about 1830, living in household of Stephen Kirk, her father.

Stephen Kirk’s will was written in 17 May 1852 and mentions Edith Miller as his youngest daughter, with no children. So, Edith Kirk Miller was married to a man with surname Miller between 1850 when the Census was enumerated and 1852 when Stephen Kirk wrote his will.

Every tree that I have reviewed on Ancestry lists Edith as born in 1812 and the wife of John Franklin Miller. While there is a John F and Edith (age 38) Miller listed on the 1850 Census, I just cannot see how this can be Edith, daughter of Stephen Kirk, as Edith Kirk would have been 4 years old when Jane Miller, the eldest child of John Miller, was born. Stephen Kirk, born about 1795, would have only been 17 years old when Edith was born. Stephen Kirk’s will specifically states that Jane Parker is his eldest daughter… “I give to my eldest daughter Jane Parker”

Find-A-Grave lists Edith as the daughter of Stephen and Cynthia Kirk but this cannot be as Stephen Kirk did not marry Cynthia until 1851, 21 years after Edith was born. Cynthia is named in Stephen Kirk’s will as the stepmother of his two youngest sons, Jesse and Kimbrell, who were born after Edith, according to the 1850 Census.

A scenario I can see is that Edith Kirk lied about her age as she married a man much older than herself who already had 6 children. The 1850 Census shows John F Miller was born in 1804. He has children ranging from 7 to 16, and a 1 year old. This indicates to me that the Edith Miller listed may be a second wife. 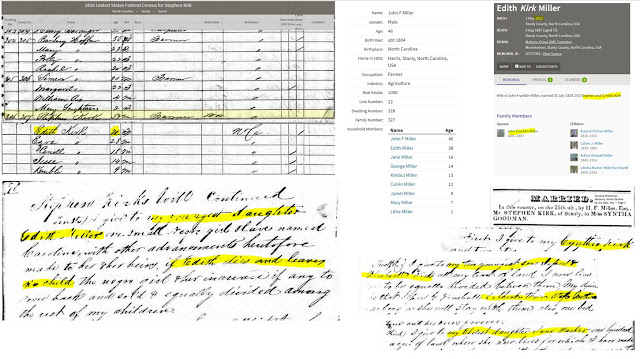 Posted by Uwharrie Roots at 6:12 PM