The fifth person mentioned in the division of land in the John Kirk Dec’d estate file is Daniel Kirk.

The first Census I found for Daniel Kirk is 1810, Captain Kirks, Montgomery County, North Carolina. This record shows no females living with Daniel Kirk. The Census captures two white males, one between the ages of 10-15, and another, presumably Daniel, age between 16-25, making his birth year about 1789. The white male between 10-15 cannot be the son of Daniel as he was born about 1798 and is only about ten years younger than Daniel, perhaps this boy is a nephew or neighbor or orphan who resides and works with Daniel. The number of enslaved people is shown as 5. It is assumed that Daniel is single in 1810 as no females or younger children are shown on this Census in his household.

As the 1820 Census was destroyed, other records must be used to locate Daniel Kirk for that year. On 15 Oct 1819, Daniel Kirk entered a land grant for 50 acres of land in Montgomery County joining the lines of his father, John Kirk Dec’d on the south west side of the Yadkin River. Three months later, 15 Jan 1820, the entry taker, D. McRae, ordered the survey of the land. The survey was completed 20 Jan 1820 by Britain Chappell. 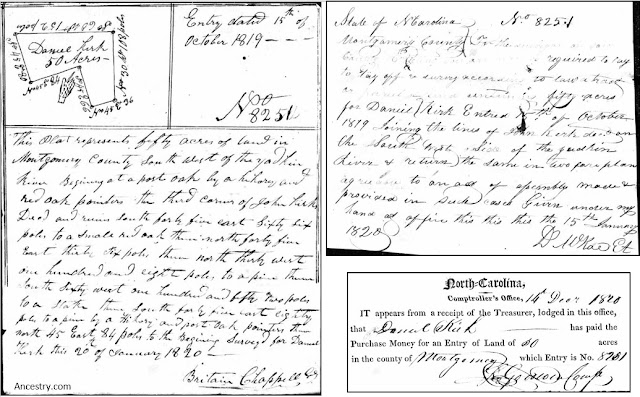 The 1830 Census does capture the Daniel Kirk family, including females and enslaved people. It is believed that Daniel married Mary Forrest about 1818/19 as their first child, James Franklin Kirk, was born about 1820. I have attempted to locate any documentation that Mary’s maiden name is Forrest. To date, I have located none and believe that the research that has been done over the years has, by reason of logical assumption based on record association, shown the best surname candidate for Mary’s maiden name is Forrest.

Most trees on Ancestry have Mary listed as the daughter of Nathan Forrest but have no documented evidence of the same. I did find in tombstone records for Badin Baptist Church in Badin, Stanly County, North Carolina, a listing that states the parents of James Franklin Kirk are Daniel Kirk and Mary (Polly) Forrest. This is not accepted as actual proof that Mary’s maiden name is Forrest but is a clue that needs to be investigated further. The record was typed around 1968 from handwritten copies of cemetery records done by David Kirk Shaver Senior and B. W. Cruse. 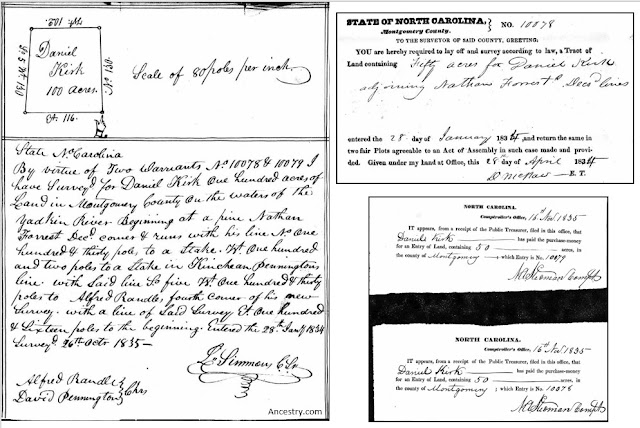 In 1838, the inhabitants on the west side of the Pee Dee River signed a petition to divide Montgomery and form a new county. The Pee Dee River neatly divided the land from north to south and the courthouse was located some three miles from the river, proving a hardship for those residents who lived west of the river. Daniel Kirk, located in District Number 6, signed the petition to divide the county.

On 2 Dec 1840, a Fayetteville Newspaper, reported that “Mr. Lilly presented a petition from the citizens of Montgomery, with a bill to carry the prayer thereof into effect, entitled a bill to lay off and establish a new county by the name of Stanly. Read first time and passed.”

13 Jan 1841, a Wilmington Newspaper reported the newly created county of Stanly from Montgomery.

7 May 1841, a Raleigh Newspaper reported the marriage between Mr. Hudson to Miss. Mary Pennington and Mr. Truxton Kirk to Miss. Tabitha Biles. To date, I have not been able to find proof of parentage for Truxton Kirk. 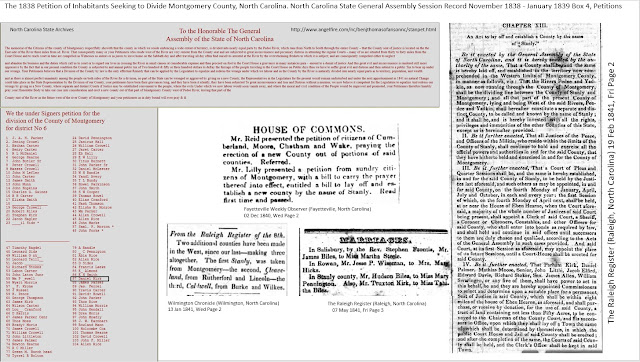 The 1840 Census shows the Daniel Kirk family living west of the Pee Dee River in Montgomery (soon to be Stanly) County. A total of 34 persons, including 26 enslaved persons, are living on the estate of Daniel Kirk. 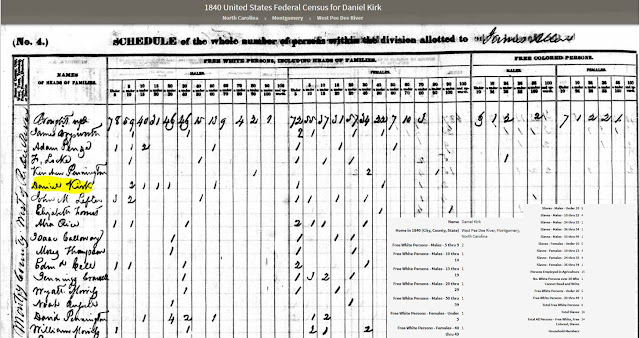 Daniel Kirk wrote his last will and testament on 27 Oct 1846 in the presence of David Pennington and Dr. Francis J. Kron. His four-page will laid out his last wishes for his family and his estate, “in a manner to promote the welfare and maintain the harmony of my family...whilst my mind has yet its natural strength and my memory its full recollection.”

Daniel’s wish is that a “full years provision for my whole family set aside” and the balance (including enslaved persons if necessary) “sold to pay lawful debts” although later on in his will, Daniel states that it is his desire “all the slaves not be sold to pay the debts as above stated.”

“$500 bequeathed to each of my sons, James F and Adam over and above their shares for the consideration of their bodily infirmities”

The “slaves shall be divided unto nine lots by Samuel P. Morton, Francis Locke, and Mark Jones, with one exception, that Mary, my wife, shall chose for herself, with the other eight lots drawn for by the hand of a child.”

Daniel lays out how the lots are to be bequeathed, “the first lot drawn shall belong to the children of deceased daughter Martha Parker and the other lots successively to the other children.”

He also states that “the share that I possess in the Bunnell tract of land shall go to the children of Martha Parker.”

To daughter Eva Eddleman “the balance of the old home tract not sold to James Parker and the note of $500, the later gave for two hundred acres of the same tract, leaving it optional for James Parker to pay the $500 or return the land” which would remain under Eva's control.

Daniel completes his will by equally dividing “the balance of the lands among the other six remaining children."

Instruction is given that "Mary, my wife, shall have at her option during her life, either the home tract or the John Forrest tract and the enjoyment of the income from the Mill, which at her death shall be sold and the proceeds equally divided among all the children.”

Lastly, Daniel names his son, “James Franklin Kirk shall have the guardianship of the children underage and shall be sole executor of this last will and testament.” 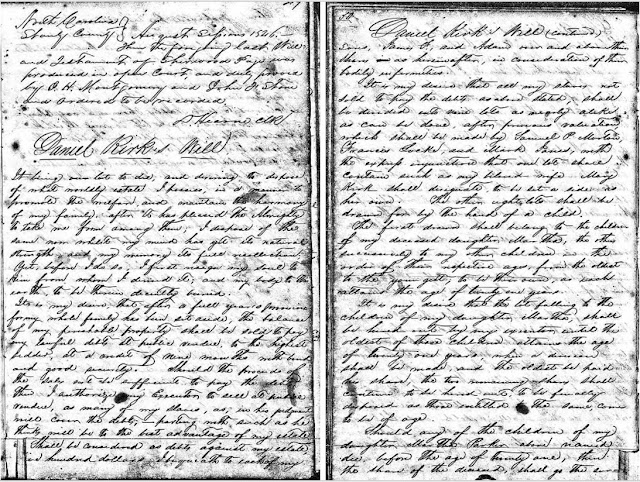 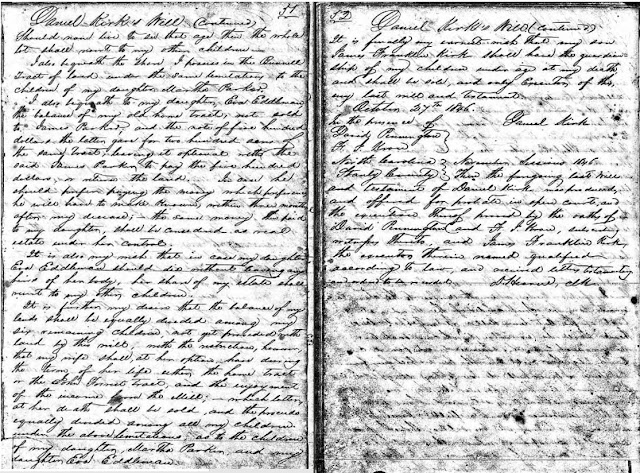 As noted in Daniel’s will, James Kirk became guardian for the younger children. Archives for Stanly County show James providing returns as guardian for his younger siblings in 1847 and 1848, proving that Daniel Kirk died prior to Nov 1847. 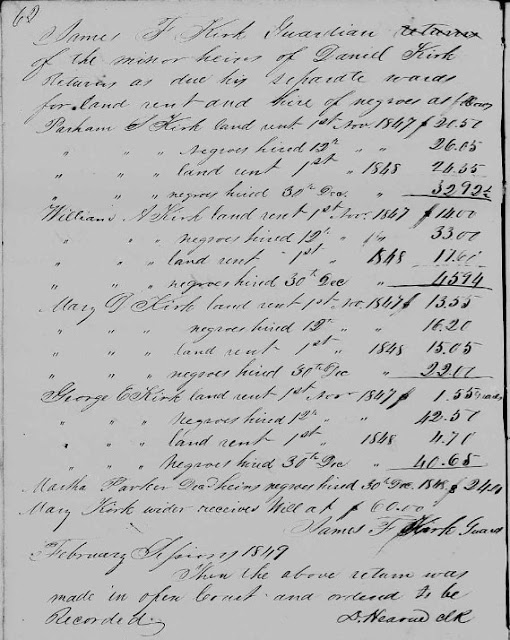 Mary lived long enough to be enumerated for the first time by name on 6 Aug 1850. All other Census records just noting her as / mark as a female. Living at home with their mother are James, Adam, George, Parham, William and Mary.

On 13 Mar 1851, James Kirk, son and executor of his father, Daniel’s, will, advertises that the Saw and Grist Mill, owned by Daniel Kirk is for sale. This is the Mill that Daniel left for Mary Kirk, his wife, “for the enjoyment of the income from the Mill, which at her death shall be sold and the proceeds equally divided among all the children.” Mary Kirk died between 6 Aug 1850, when she was enumerated on the Census and 6 Mar 1851 when James Kirk, her son, first advertised the Mill for sale as according to his father’s will. 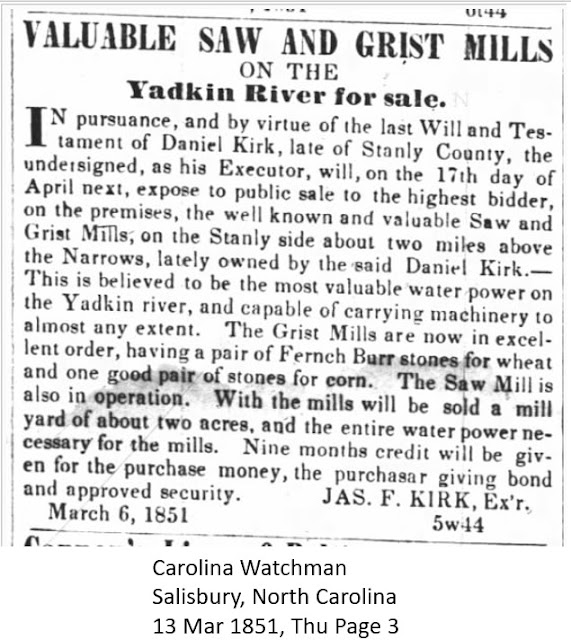 Posted by Uwharrie Roots at 2:31 PM