The sixth and eighth persons mentioned in the division of land in the John Kirk Dec’d estate file are Nancy Jones and Rebekah Jones.

Division the 8th and Lots No 8 valuation $250 to Rebekah Jones lying in two tracts adjoining one tract of 150 acres called the Walkr (Walker?) field tract beginning at a post oak by a read oak pointer courses not known but may be had by having reference to the Petition (?) granted to sd John Kirk Dec’d also fifty acres adjoining the same survey William Harris and Richard Parker's lines and Stephen Kirk's also.

I have spent the last few weeks reading everything I could get my hands on about the Jones family who lived near the Kirk family on the west side of the Yadkin / Pee Dee River in Montgomery County, North Carolina. I still cannot say who these sisters married. As both husbands have the surname Jones, it is likely that they were related, and could be brothers. It is not uncommon for sisters to marry brothers. My own Marks and Gunter ancestors certainly did.

A Charles (and Thomas) Jones shows up on the 1790 Census for Montgomery County. From the 1800 Census, Charles looks to have been born before 1755 based on age range. He is living 2 doors down from John Kirk, the father of Nancy and Rebekah, so it is very probable that the Jones and Kirk families know each other. In 1810, Charles lives next door to a Moss and Forrest family, of whom, children of John Kirk, married into. It could be that these sisters married sons of Charles Jones.

Charles is shown residing in Anson County as he signed the petition to divide Anson to form Montgomery in 1777. He entered his first land grant in Anson County, around the same time that Montgomery was formed from Anson, and that land grant was issued in Montgomery County. Two more tracts of land were surveyed for Charles in 1799 and 1818, although the later could be for a son. 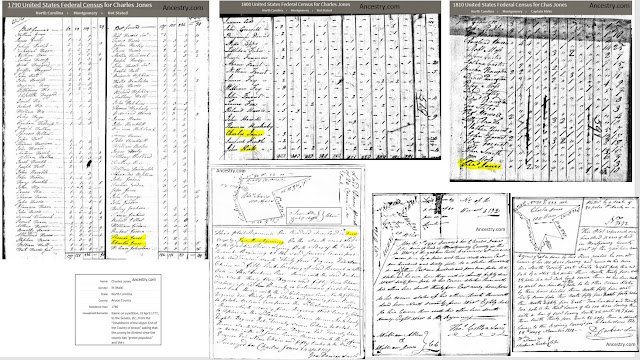 Clearly Nancy Kirk and Rebekah Kirk married into the Jones family, however, to which Jones each married, it is yet to be discovered.
Posted by Uwharrie Roots at 2:26 PM